Russian authorities may additionally be engaged in a wider campaign of ethnic cleansing by depopulating Ukrainian territory through deportations and repopulating Ukrainian cities with imported Russian citizens. Ethnic cleansing has not in itself been specified as a crime under international law but has been defined by the United Nations Commission of Experts on violations of humanitarian law committed on the territory of the former Yugoslavia as “rendering an area ethnically homogeneous by using force or intimidation to remove persons of given groups from the area” and “a purposeful policy designed by one ethnic or religious group to remove by violent and terror-inspiring means the civilian population of another ethnic or religious group from certain geographic areas.”[3] According to the UN definition, ethnic cleansing may be carried out by forcible removal, among other methods.[4] These definitions of ethnic cleansing campaigns are consistent with reports of the forcible deportation and adoption of Ukrainian children, as well as reports by Ukrainian sources that reconstruction projects in Mariupol are intended to house “tens of thousands of Russians” who will move to Mariupol.[5]

Prominent Russian milbloggers who yesterday announced the existence of “hit lists” reportedly originating with the Russian Ministry of Defense (MoD) and targeting milbloggers for their coverage of operations in Ukraine walked back their claim on October 15. As ISW reported on October 14, prominent Russian milblogger Semyon Pegov of the WarGonzo Telegram channel accused “individual generals and military commanders” of the Russian MoD of developing a “hitlist” of Russian milbloggers whom the MoD intends to prosecute for “discrediting” the MoD’s handling of the war in Ukraine.[6] Pegov’s claim was amplified by several other milbloggers and generated substantial panic about censorship in the hyper-nationalist Russian information space.[7]

Pegov announced on October 15, however, that “there are no more lists”, and that the issue of lists has been removed from the agenda and congratulated his following and the wider milblogger community for being untouchable in the face of attempted crackdowns.[8] Pegov also reiterated that he has been aware of the list for weeks and knew that administrative and political power structures had already begun working on investigations of individual channels. Pegov claimed that he has learned who the author of the list was and praised his followers and colleagues for supporting him. Other prominent milbloggers amplified Pegov’s statements and stated that milbloggers continue to lead the fight for truth in the information space.

As ISW has previously assessed the announcement of mobilization served as a catalyst for a breakdown in the Russian information space that put the increasingly alienated MoD further at odds with Russian President Vladimir Putin and the cohort of milbloggers that he has periodically supported and empowered.[9] The Russian milblogger community may have strategically weaponized the rumors of MoD hit lists against the MoD itself by exposing the information and appearing to defeat the MoD attacks against it—whether or not they were real in the first place. The discourse surrounding the existence of these lists indicates continued structural fractures between the MoD establishment, the milbloggers, and the Kremlin.

The Wagner Group Private Military Company is likely continuing efforts to assert its supremacy over the Russian Ministry of Defense (MoD) and conventional Russian ground forces. A video posted to social media on October 13 shows servicemen of the 126th Coastal Defense Brigade of the Black Sea Fleet in an unspecified location in Kherson Oblast complaining that they have been fighting in the area since the beginning of the war without breaks or troop rotation.[10] The servicemen asserted that they are being “crushed” by Ukrainian forces and emphasized that they have one BTR (armored personnel carrier) for 80 people, which is greatly restricting their maneuverability.[11] After the video circulated, a Wagner Group-affiliated Telegram channel announced on October 14 that Wagner Group leadership decided to transfer four off-road vehicles to the 126th Coastal Defense Battalion in support of their efforts to hold the frontline in Kherson Oblast.[12] This exchange is noteworthy in light of ISW’s previous assessment that Wagner Group financier Yevgeny Prigozhin is actively attempting to curry favor with Russian President Vladimir Putin and set Wagner Group forces apart from conventional MoD forces.[13] The move to donate basic equipment to a detachment of conventional Russian ground forces may be an implicit critique of the MoD’s apparent inability to provide such necessities to its own soldiers.

Russia may have signed a new contract with Iran for the supply of Arash-2 drones. Ukrainian and Russian Telegram channels reported “leaked” information from unspecified Iranian sources that Russia has purchased an unknown number of Arash-2 drones, which are purportedly faster and more destructive than the Shahed-136 drones that are currently in use by Russian forces.[14]  Commander of the Iranian Ground Forces Brigadier General Kiomars Heydari previously claimed in early September that the Arash-2 drones have unique long-range capabilities and could target cities in Israel such as Tel Aviv and Haifa from bases in Iran.[15] Reports that Moscow is continuing to rely on Tehran for destructive munitions are consistent with a report from the US Treasury Department that suggests Russia is rapidly expending its supply of microelectronics that are critical for the military-industrial complex because it cannot replace key components unavailable because of sanctions.[16] Russia will likely continue to leverage its relationship with Iran to circumvent sanctions, although it is very unlikely that Russian forces will use the Arash-2 to any greater effect than they have used the Shahed-136 model.[17] 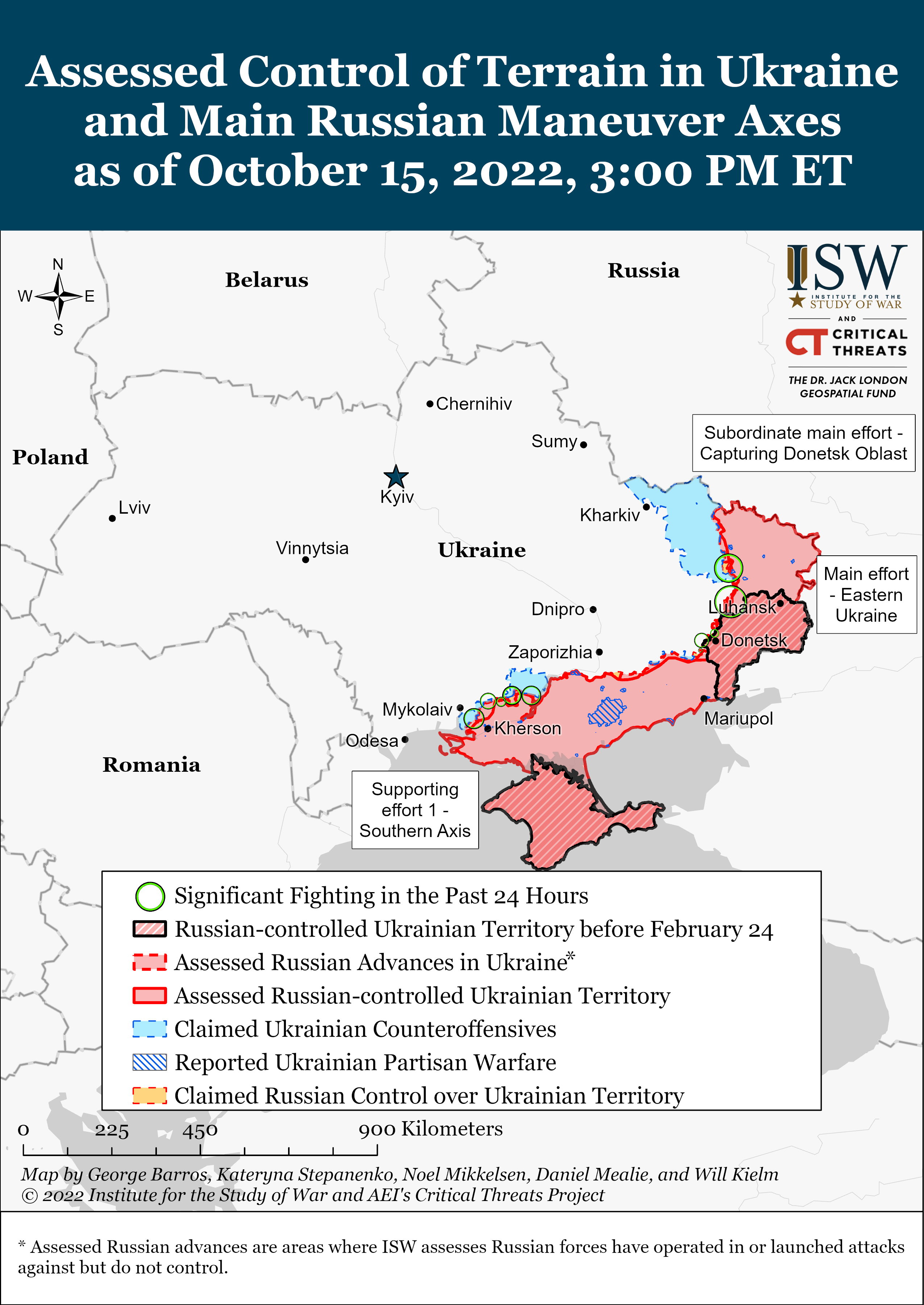 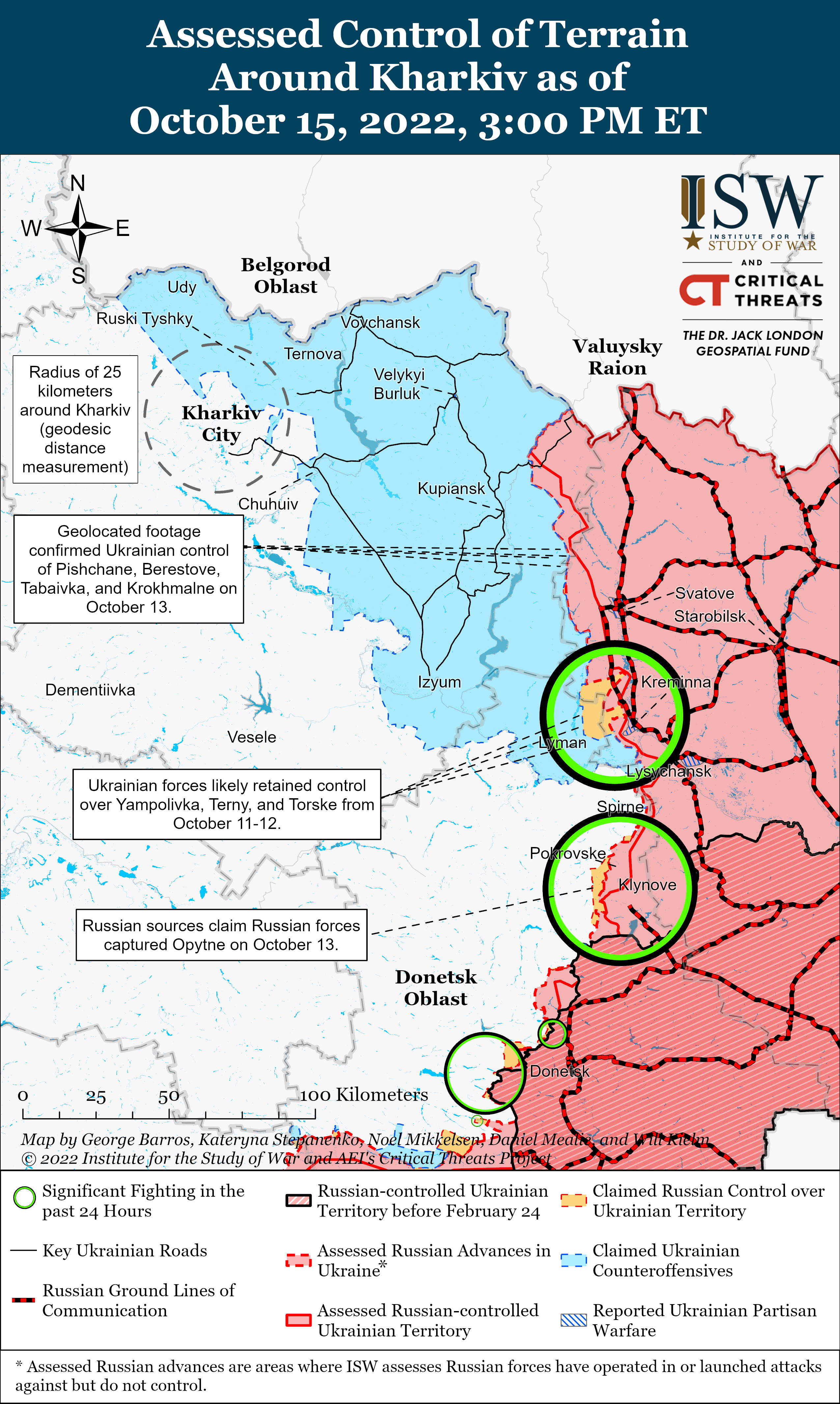 Russian sources claimed that Ukrainian troops launched a general counteroffensive in northern Kherson Oblast on October 15. Numerous Russian milbloggers reported that Ukrainian forces initiated a mechanized drive on Russian positions along the entire frontline that runs between Davydiv Brid in northwestern Kherson Oblast and Dudchany in northeastern Kherson Oblast after conducting concentrated artillery preparation of the battlefield.[25] Several Russian sources claimed that Ukrainian troops attempted to break through Russian positions in northeastern Kherson Oblast towards Beryslav and from northwestern Kherson Oblast towards Ishchenka and Stadok.[26] These Russian claims remain unsubstantiated. Russian milbloggers emphatically claimed that Russian troops repelled all Ukrainian attacks.[27] Russian milbloggers specified that elements of the 126th Coastal Defense Brigade and 810th Separate Guards Naval Infantry Brigade of the Black Sea Fleet, 205th Separate Motor Rifle Brigade of the 49th Combined Arms Army, 140th Anti-Aircraft Missile Brigade of the 29th Combined Arms Army, and 10th Spetsnaz Special Purpose Brigade are engaged in fierce fighting and holding the defense in this area.[28] The claim regarding the role the 126th Coastal Defense Brigade is playing is noteworthy in light of reports about the brigade’s exhausted state. 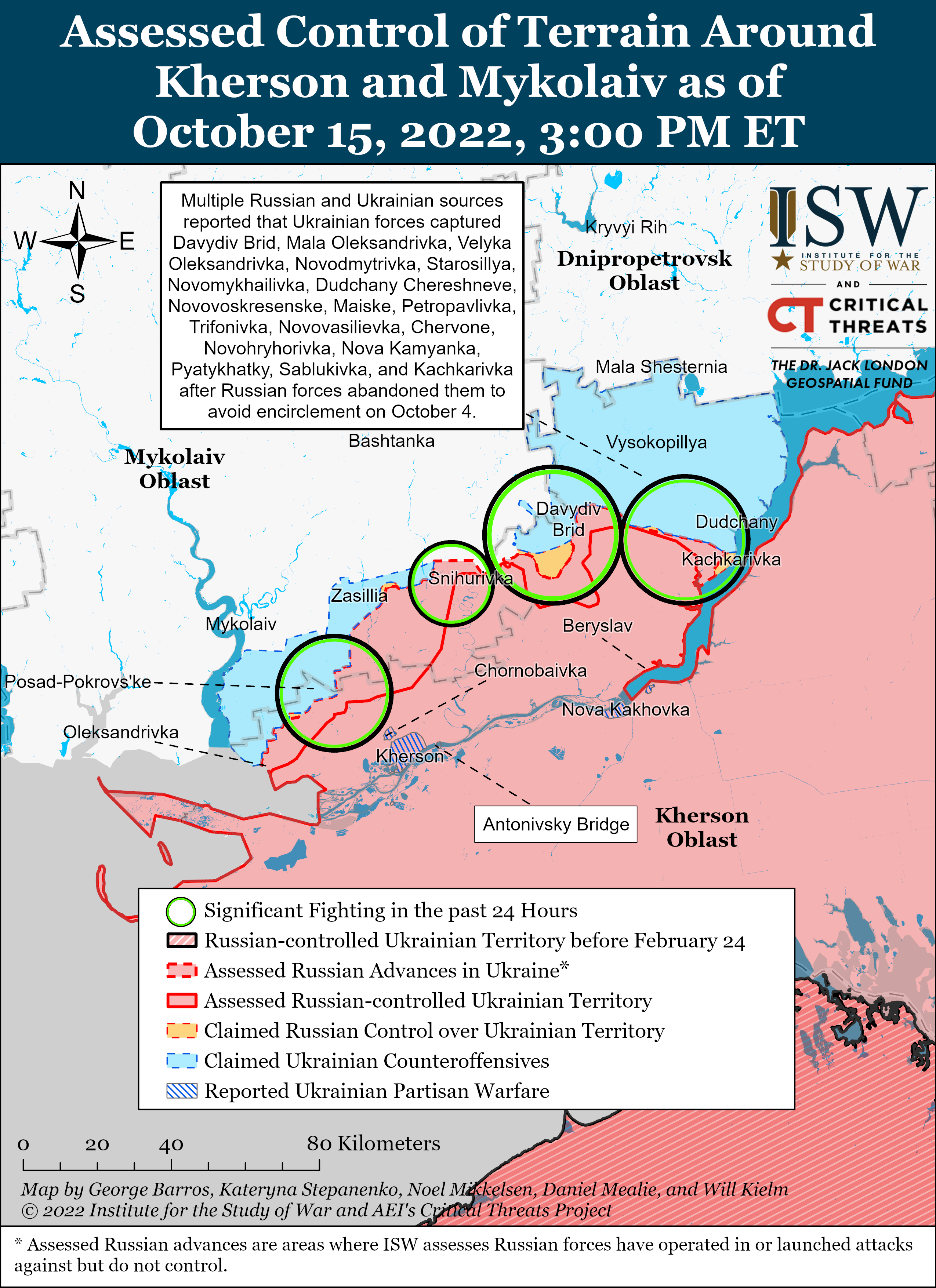 Russian forces continued ground attacks in Donetsk Oblast on October 15. The Ukrainian General Staff reported that Ukrainian forces repelled Russian ground attacks near Bakhmut, northeast of Bakhmut near Spirne, Berestove, Yakovlivka, and Bakhmutske, and south of Bakhmut near Optyne and Ivanhrad.[31] A Russian source claimed that Russian forces destroyed a shortwave repeater, disrupting a Ukrainian Starlink system in the Bakhmut-Soledar area.[32] Russian sources claimed that fighting is ongoing in the Soledar area northeast of Bakhmut and that Russian forces are increasing unspecified operations in the area.[33] The Ukrainian General Staff also reported that Ukrainian forces repelled Russian ground attacks southwest of Avdiivka near Pervomaiske, Nevelske, and Krasnohorivka, and near Marinka, Novomykhailivka and Pobieda southwest of Donetsk City.[34] A Russian source claimed that Ukrainian forces are losing positions in the Avdiivka area and are withdrawing to Nevelske.[35] 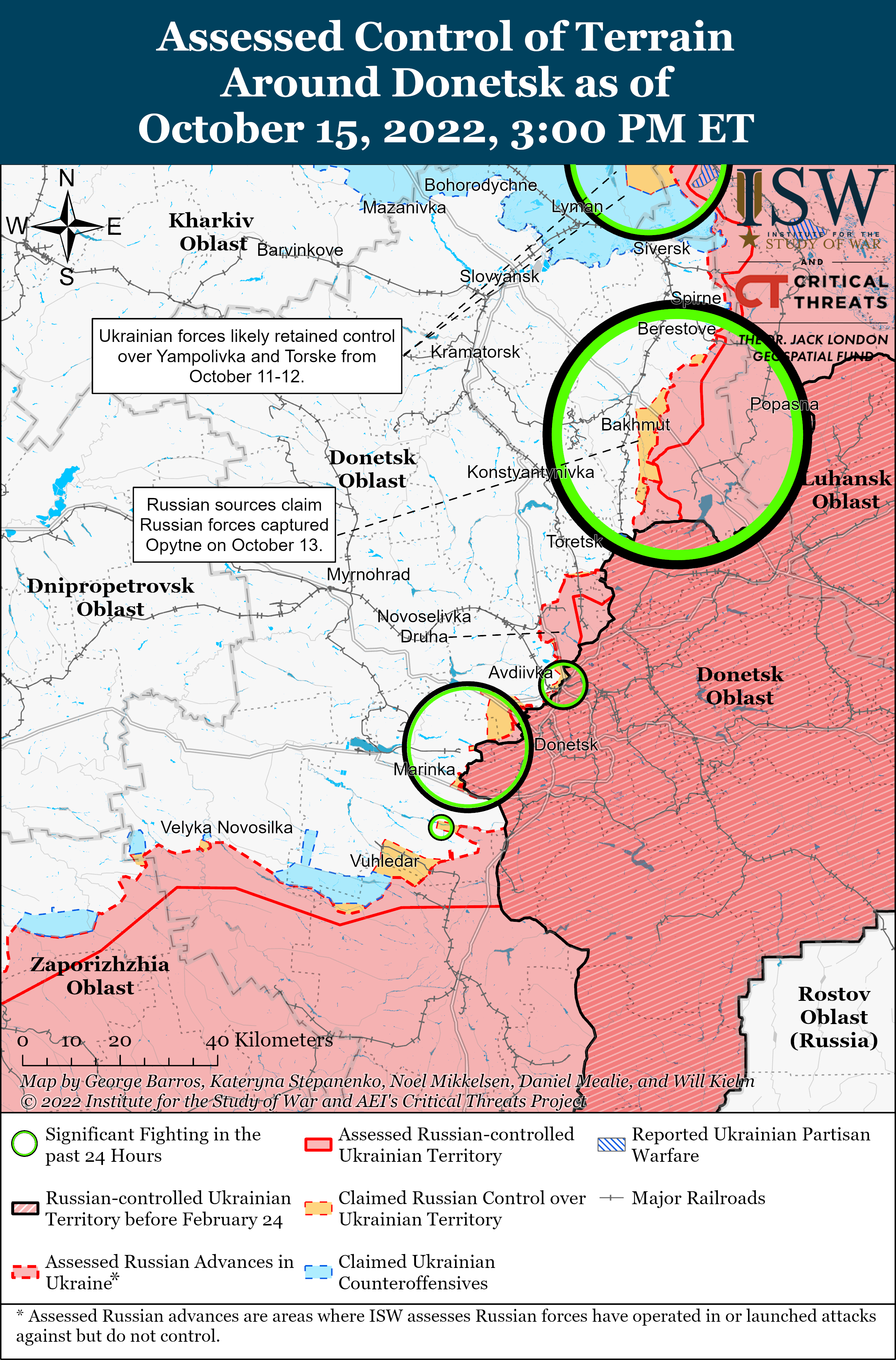 Russian sources continue to document problems with Russian mobilization.  State Duma Deputy Maxim Ivanov reportedly criticized Russian military commissariats in Sverdlovsk Oblast and accused the commissariats of “not chasing quality but quantity” in order to rush and complete the recruitment quotas.[53] Russian sources posted an obituary for a 28-year-old Government of Moscow department head who was mobilized on September 23, deployed a few days later despite having zero combat experience, and killed in action in Ukraine on October 10.[54] This high-profile death reportedly prompted a mass exodus of military-aged workers from the Government of Moscow.[55] Russian sources are expressing frustration that Russian conscripts are not being assigned to roles appropriate for their military specializations. An artillery specialist reportedly was assigned to a motorized rifle unit and a Rosgvardia Spetsnaz officer was reportedly assigned to command a tank battalion.[56] A prominent Russian milblogger reported that there is a lack of uniformity in training standards for mobilized personnel, resulting in some mobilized forces not learning skills beyond basic weapons handling.[57]