Russia has seemingly intensified its information operation to falsely portray Ukraine as a terrorist state, likely to set information conditions to counter efforts to designate Russia as a terrorist state. Several Russian sources made unverified claims that Russian Federal Security Service (FSB) officers detained Ukrainian citizens for allegedly planning “terrorist attacks” in Sverdlovsk, Moscow, and Bryansk oblasts on October 12.[1] Russian milbloggers relatedly amplified rhetoric accusing Ukraine of being a terrorist state and calling for Russian authorities to enhance “counterintelligence” procedures and formally designate Ukraine as a terrorist state.[2] Claims of preparations for alleged and subversive Ukrainian activity in Russia align with a wider attempt to set information conditions to respond to Ukrainian attempts to formally designate Russia a terrorist state, especially in the wake of recent massive attacks on critical Ukrainian infrastructure and residential areas. The Russian information space may also be setting conditions to justify further massive strikes on Ukrainian rear areas; although, as ISW has previously assessed, these tactics are part of the Russian way of war and will likely be utilized regardless of informational conditions.[3]  Russian authorities may also be setting conditions for false-flag attacks against Russia framed as Ukrainian-perpetrated acts of terrorism.

Russian forces may have brought Iranian Islamic Revolutionary Guard Corps (IRGC)-affiliated personnel to occupied areas in Ukraine to train Russian troops in the use of Shahed-136 drones. The Ukrainian Resistance Center reported on October 12 that Russian forces brought an unspecified number of Iranian instructors to Dzankoi in Crimea and Zalizniy Port and Hladivtsi in Kherson Oblast to teach Russian forces how to use Shahed-136 attack drones.[4] The Resistance Center stated that the Iranian instructors directly control the launch of drones on civilian targets in Ukraine, including in Mykolaiv and Odesa oblasts.[5] The IRGC is notably the primary operator of Iran‘s drone inventory, so these Iranian instructors are likely IRGC or IRGC-affiliated personnel.[6] 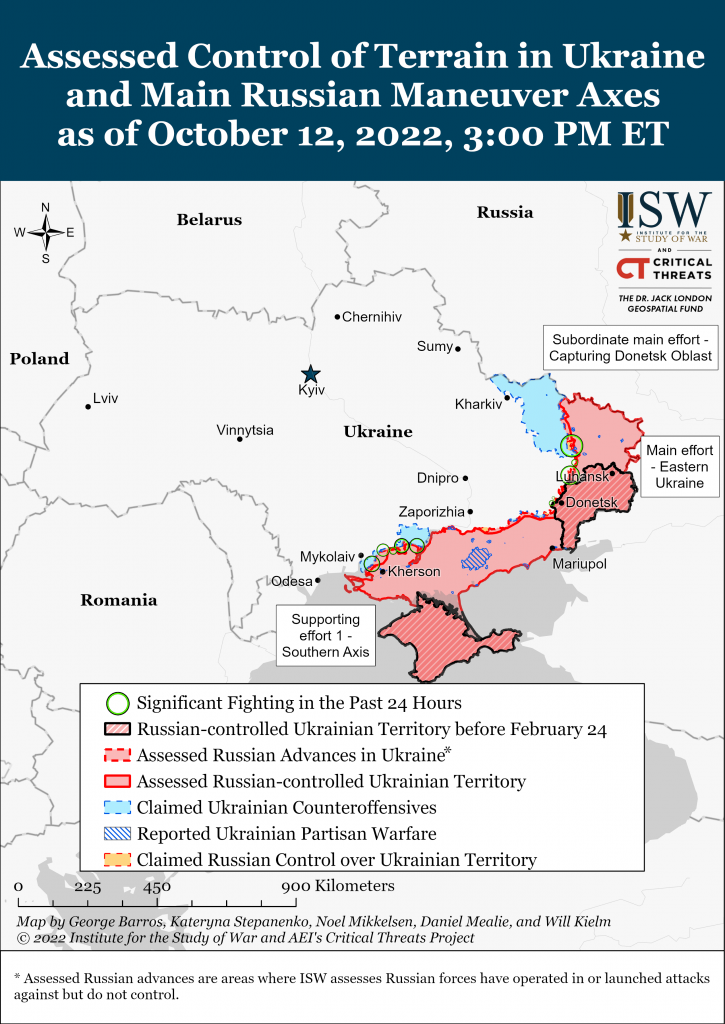 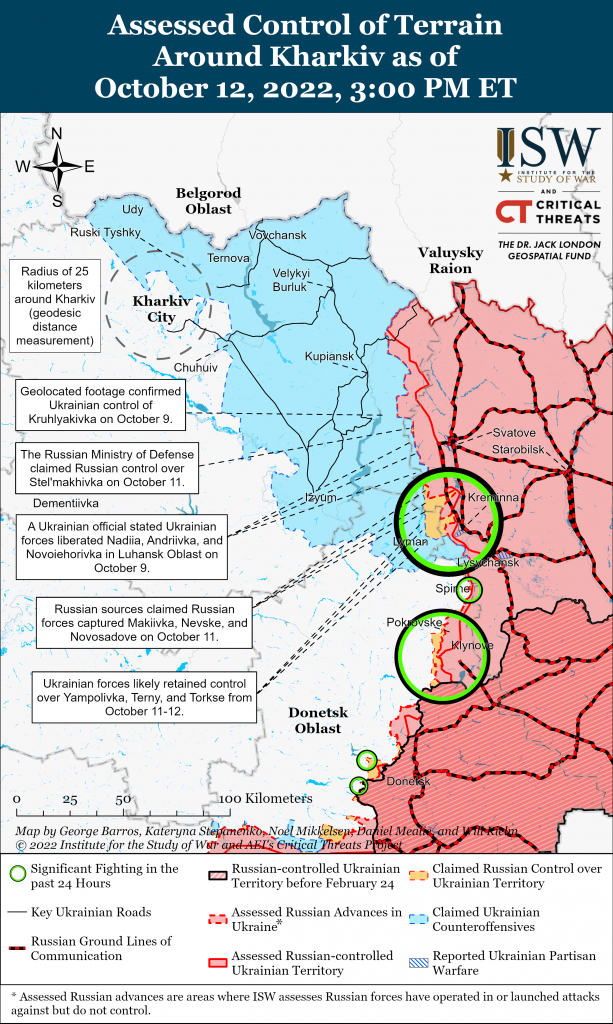 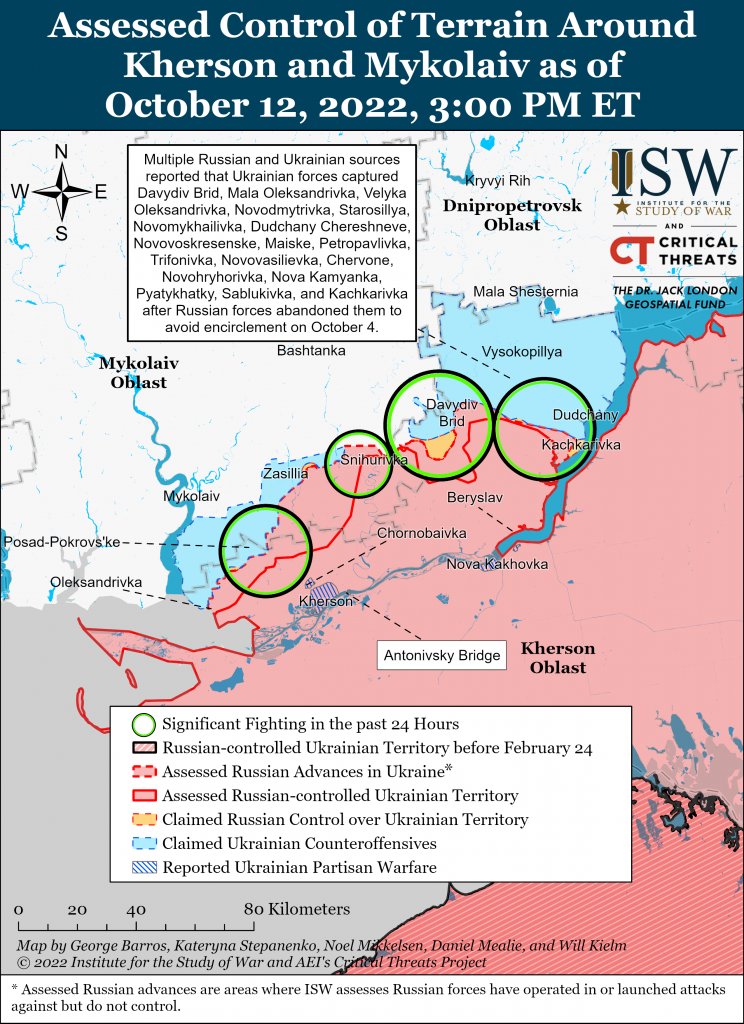 Russian forces continued ground attacks in Donetsk Oblast on October 12. The Ukrainian General Staff reported that Ukrainian forces repelled Russian ground assaults near Bakhmut; to the northeast of Bakhmut near Soledar, Spirne, and Bakhmutske; and to the south of Bakhmut near Mayorsk, Ivanhrad, and Mykolaivka.[24] A Russian source reiterated claims that Wagner Group forces entrenched themselves in Ivanhrad and advanced within a few kilometers of the center of Bakhmut.[25] A Russian source also claimed that Russian forces seized an unspecified “important” road junction northeast of Bakhmut, likely referring to the E40 and T1302 intersection.[26] The Ukrainian General Staff additionally reported that Ukrainian forces repelled Russian ground attacks west of Avdiivka near Pervomaiske and west of Donetsk City near Krasnohorivka.[27] Russian sources claimed that the Donetsk People’s Republic (DNR) 100th Brigade made unspecified advances toward Nevelske, just northwest of Donetsk City.[28] The RussianMoD claimed that Russian forces repelled a Ukrainian ground attack near Novodarivka in eastern Zaporizhia Oblast.[29] 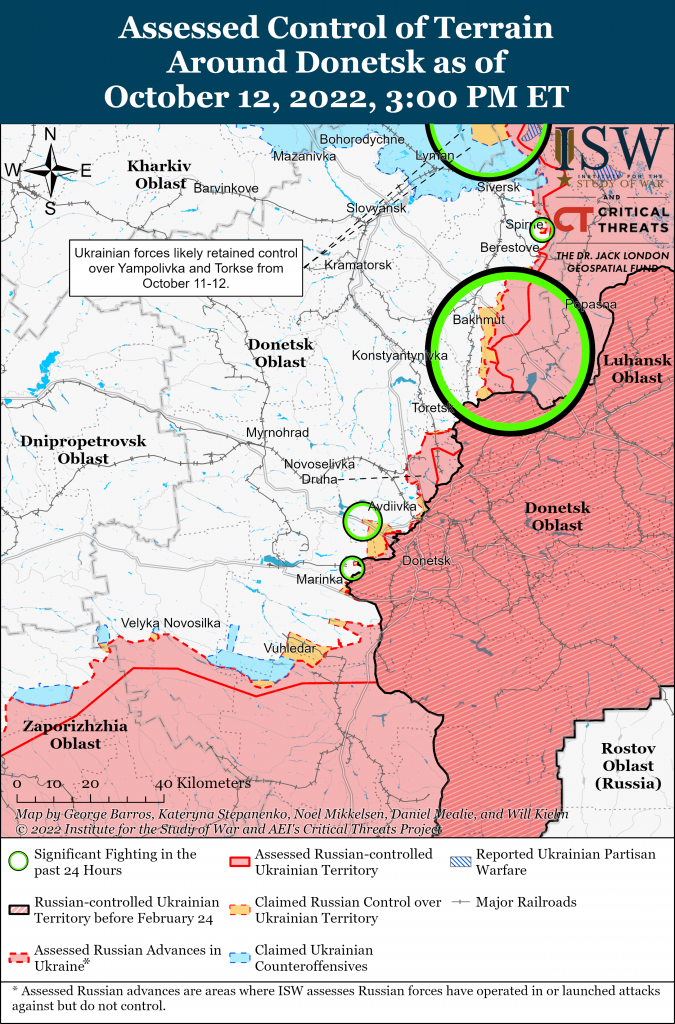 Russian forces are likely reinforcing the Zaporizhia Oblast front line as of October 12. Pro-Kremlin Russian news outlet RIA Novosti reported a Russian soldier’s claims that Russian forces have equipped defensive lines along the Orikhiv-Polohy front and are prepared to advance.[30]  Russian forces are likely unable to conduct offensive operations in Zaporizhia Oblast; the RIA Novosti report is likely a response to the sustained milblogger concern over a Ukrainian counteroffensive in the south. Russian milbloggers continue expressing concern that Ukrainian forces are preparing to launch a counteroffensive in Zaporizhia Oblast but are divided about whether the attack is imminent or postponed.[31] The Russian military may have reinforced the Zaporizhia front with elements of the 58th Combined Arms Army (CAA). Russian sources posted footage of a Russian T-90M tank of an unspecified element of the 58th Combined Arms Army (CAA) firing at a target in an unspecified area along the Zaporizhia Oblast front line.[32] Ukrainian and Western sources previously reported the 58th CAA is  severely degraded, and Russian sources reported on September 9 that Russian tank manufacturer Uralvagonzavod delivered a batch of T-90M tanks to the Russian Ministry of Defense and directed factories to work around the clock to increase production.[33]

The Russian Federal Security Service (FSB) released its findings on the cause of the attack on the Kerch Strait Bridge in Crimea on October 11. The FSB claimed that the Ukrainian government transported the explosives used in the attack from Ukraine through the port of Odesa. Russian milbloggers amplified the FSB report and highlighted this detail as part of their calls for the Russian government to either not renew or pull out of the current agreement that allows Ukraine to export grain through the Black Sea.[40]

Russian and Ukrainian sources exchanged accusations of shelling the Zaporizhzhia Nuclear Power Plant (ZNPP) on October 12; the shelling disconnected the ZNPP from external power lines for the second time in five days.[41] Ukrainian state nuclear agency Energoatom reported on October 12 that Ukrainian engineers restored the ZNPP to the Ukrainian power grid.[42] Russian sources claimed that Russian forces repelled a 30-person Ukrainian sabotage and reconnaissance group from advancing on the ZNPP from the Dnipro River.[43]

The Russian government continues to send poorly disciplined mobilized Russians to Ukraine with little to no training. An anonymous Ukrainian military officer reportedly stated that hundreds of Russian convicts offered pardons for combat have already showed up on the battlefield in Ukraine and that some have gone absent without leave.[49] More than 100 Russian conscripts from Bryansk reportedly refused to deploy to Ukraine from their base in Soloti, Belgorod Oblast.[50] The Ukrainian General Staff reported that 500 mobilized replacements equipped with Soviet-era gear already joined the Russian 205th Separate Motorized Rifle Brigade of the 49th Combined Arms Army in combat in Ukraine.[51]

Russian and occupation administration officials continue to employ coercive measures against residents of Russian-occupied territories to generate forced support for Russian military operations in Ukraine. Melitopol Mayor Ivan Fedorov reported on October 11 that Russian and occupation administration officials have detained and tortured more than 700 Melitopol residents in pursuit of coerced confessions and to compel cooperation with the Zaporizhia occupation administration.[54] Fedorov also reported on October 12 that Russian and occupation administration officials forced Melitopol residents to donate blood for wounded Russian soldiers.[55] The Ukrainian Resistance Center reported on October 12 that Russian forces have placed military personnel and equipment in schools in Yasynuvata, Donetsk Oblast, Tokmak, Zaporizhia Oblast, and Kadiivka, Luhansk Oblast, and in Myrolyubivka and Hladivka in Kherson Oblast.[56] The Ukrainian Resistance Center reported that Russian forces quartering in Ukrainian schools during the Ukrainian school year means that these measures amount to Russian forces using schoolchildren as “human shields,” although ISW has no independent confirmation that the schools are in use by troops or students at this time.[57]