The United States faces an international security environment that is rapidly deteriorating. The Critical Threats Project (CTP) is dedicated to producing continuous assessments of threats to the US and its allies and helping our readers understand their nuance and scale. The Salafi-jihadi movement in Africa is one such threat that is growing quickly but is often overlooked. CTP has endeavored to provide the assessments needed to understand this challenge in 2021 and will continue and expand our efforts in 2022.

Western policymakers neglect the Salafi-jihadi threat in Africa because of “political burnout, competing priorities, and policy hurdles,” argues AEI Research Fellow and CTP Research Manager Emily Estelle. She writes that the growth of Salafi-jihadi insurgencies undermines other policy goals, including public health and economic growth—in part because of the ballooning economic damage from terrorism in Africa. African Salafi-jihadi groups also pose a growing external attack threat as they develop local capabilities that can be repurposed transnationally.

CTP and the US Military Academy at West Point’s Combating Terrorism Center (CTC) hosted a debate series on the Islamic State and al Qaeda in Africa. The first debate examined the importance of African extremist groups’ affiliation with the Islamic State. The second debate focused on the external threat posed by Africa Salafi-jihadi groups. The third debate, hosted by AEI’s Katherine Zimmerman, examined the evolution of the global terrorist threat and the lessons learned from the past 20 years of counterterrorism efforts.

CTP provided leading analysis of the Islamic State’s new foothold in southern Africa. Estelle analyzes the rise of the Islamic State in Mozambique in Foreign Policy and an AEI-CTP report with Jessica Trisko Darden, published shortly before the militants’ surge grabbed international headlines. Estelle and Trisko Darden argue that the Mozambique insurgency “promises to spread into neighboring countries and deliver an enduring haven to extremist militants with regional and global ambitions while exacting a steep humanitarian toll.” They present several recommendations for defeating the insurgency and resolving underlying grievances. 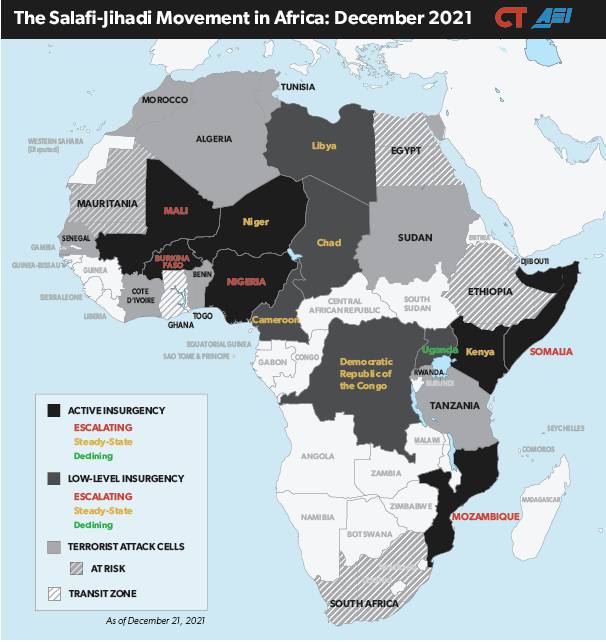