The Islamic State claimed its first attacks in Uganda with several bombings in October and November 2021. The Islamic State’s Central Africa Province–Allied Democratic Forces (ISCA-ADF) conducted two improvised explosive device attacks in Kampala, Uganda’s capital, on October 8 and October 25.[1] Ugandan authorities also blamed the group for an unclaimed *suicide bombing in Kampala on October 23. The campaign escalated with near-simultaneous suicide bombings that killed three people in the capital on November 16. This attack campaign signals an uptick in the Islamic State’s capabilities in East Africa.

ISCA-ADF is an Islamic State affiliate based in northeastern Democratic Republic of the Congo (DRC). Many Congolese and Ugandans call the group by its original name, the Allied Democratic Forces (ADF). Ugandan Salafi-Tablighi Muslims and a Ugandan rebel group founded the ADF in 1995 and based its operations in northeastern DRC. The group still draws mainly Congolese and Ugandan members but has undergone an ideological shift and become more integrated with transnational Salafi-jihadi networks since a new leader took control in 2015. The ADF established connections with the Islamic State in 2016 and became part of the Islamic State’s Central Africa Province in 2019.

ISCA-ADF has opposed the government of Ugandan President Yoweri Museveni since the ADF’s formation. Pressure from Ugandan security forces has historically limited the group’s activity inside Uganda. The group retained its anti-Museveni objective from its base in the DRC and regularly attacked inside Uganda until 2017.

ISCA-ADF conducted its recent attacks using lines of communication along roadways that connect Kampala with the group’s base in northeastern DRC. Nearly all *arrests of ISCA-ADF *cells since the November bombings *occurred along the A109 expressway and smaller highways that connect northeastern DRC to Kampala. Ugandan police report that the bombers and most arrested operatives are Ugandan nationals. These extensive support lines indicate ISCA-ADF can smuggle supplies and people across Uganda. 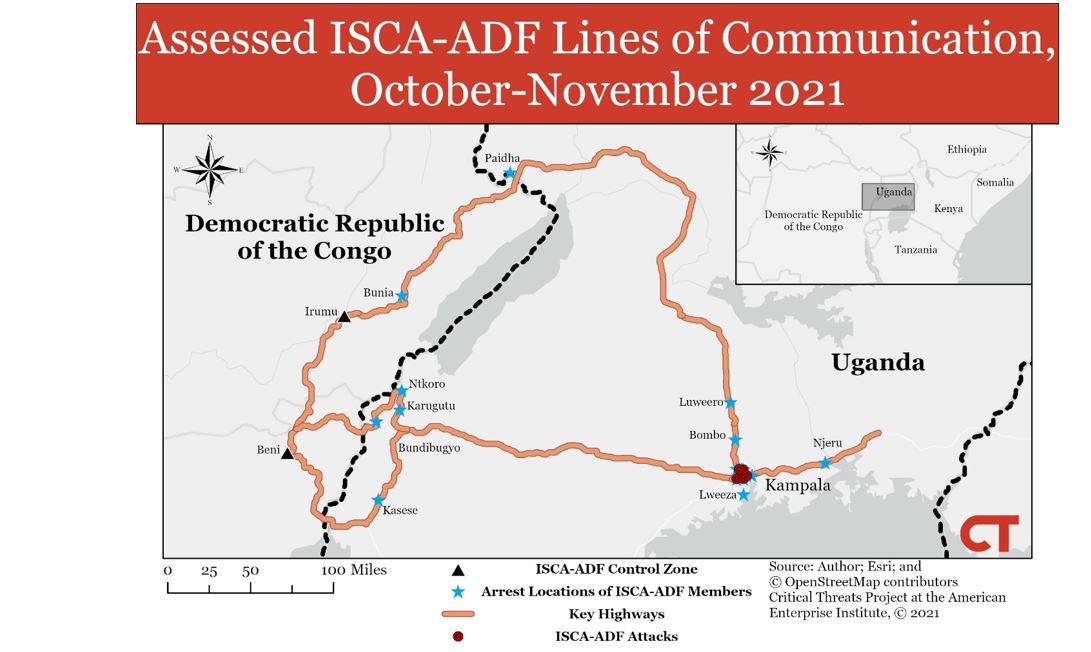 Islamic State trainers likely helped ISCA-ADF develop the capability for the simultaneous November 16 suicide bombings. ISCA-ADF began conducting suicide attacks in northeastern DRC in June 2021. The group’s lack of experience indicates that outside training was likely necessary to prepare bomb makers and operational planners for the near-simultaneous bombings in Kampala on November 16. President Museveni said, in a December 6 interview, that militants based in Somalia and Kenya likely helped the November 16 bombers.

Museveni’s statement may alternately have referred to al Qaeda affiliate al Shabaab, which has connections with the ADF that predate the latter’s Islamic State ties. Al Shabaab’s staunch opposition to the Islamic State makes this degree of al Shabaab support unlikely, however.

Uganda will most likely maintain its regional security commitments while intensifying counterterrorism operations in Uganda and northeastern DRC. The Ugandan military began launching air strikes targeting ISCA-ADF camps in northeastern DRC on November 29. Uganda then started *moving troops into the area with the support of the DRC government in early December. Ugandan police have also made *arrests that will hamper the capabilities of ISCA-ADF cells inside Uganda.

A heavy-handed Ugandan government reaction risks alienating Muslim Ugandans and inadvertently bolstering ISCA-ADF recruitment. Some Ugandans condemned the extrajudicial *killing of an arrested cleric suspected of recruiting for ISCA-ADF on November 17. The US State Department and international organizations have also reported that Ugandan security forces subject Salafi-Tablighi Muslims to various *extrajudicial actions. The US sanctioned Uganda’s chief of military intelligence for human rights abuses on December 7.

Continued ISCA-ADF attacks could lead Uganda to deprioritize its participation in the African Union Mission in Somalia (AMISOM). This scenario is less likely but dangerous. Uganda contributes the most troops to AMISOM, providing approximately 5,800 of the 19,600 AMISOM troops in Somalia. The Ugandan contingent operates in strategically significant areas, including Mogadishu and the Lower Shabelle region. President Museveni already *threatened to withdraw troops in September 2021 because of Somalia’s political instability.

Museveni is likely also unhappy with AMISOM’s international backers. The United Nations and European Union rejected a Museveni-supported proposal to make AMISOM a joint African Union–United Nations force in 2021. The EU also intends to reduce AMISOM funding in 2022. Museveni threatened to withdraw if the UN cut funding in 2019, but he has never followed through on his threats to withdraw. A sustained ISCA-ADF campaign in Uganda or increased Ugandan military activity targeting the group in northeastern DRC could change his calculus, however.

Increased strain on Ugandan security forces comes as AMISOM’s future grows increasingly uncertain. Negotiations on the relationship between the African Union, international funders, and the Somali Federal Government have stalled. The current AMISOM mandate expires at the end of 2021. A Ugandan withdrawal from AMISOM remains unlikely but would be a worst-case scenario for AMISOM. Other AMISOM troop-contributing countries would be unlikely to fill the shortfall, particularly as another AMISOM contributor (Ethiopia) remains embroiled in its own conflict. Somali forces are not yet capable of assuming full responsibility for the country’s security. Tense Somali elections could also cause infighting between Somali security forces that would compound the situation. An ill-timed and poorly coordinated AMISOM drawdown would cede large swaths of southern Somalia to al Shabaab and leave Mogadishu vulnerable to a surge in al Shabaab attacks.

A sustained ISCA-ADF threat to Uganda will challenge the Ugandan government’s domestic security response and may also strain its commitment to regional counterterrorism missions. The Ugandan government must pursue a balanced approach that degrades ISCA-ADF capabilities without overreacting and alienating local populations. An extended campaign against ISCA-ADF risks drawing Ugandan resources away from AMISOM, emboldening al Shabaab in Somalia.