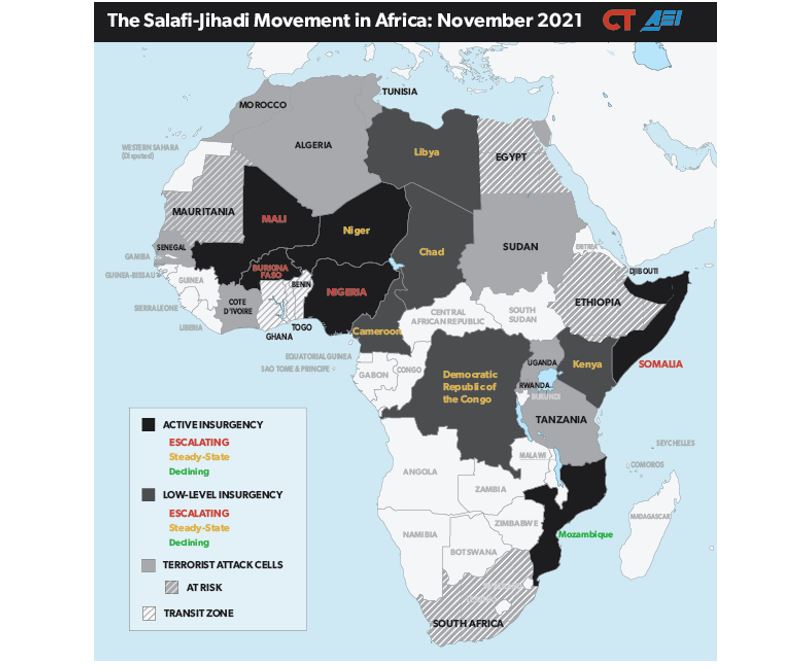 A wave of instability is crashing over Africa. A yearlong civil war has brought Ethiopia, Africa’s second most populous country, to the brink of catastrophe. Sudan’s military ousted its civilian leaders in late October, derailing a transition to democracy. Many other countries face worsening domestic instability, growing threats from non-state actors, and tensions with their neighbors.

Unrest of this scale has many consequences, first among them the effects on civilians facing humanitarian crises, political repression, and human rights violations. Another consequence will be the growth of the Salafi-jihadi movement, which exploits insecure environments and poor governance conditions to embed itself in vulnerable populations.

Authoritarian takeovers in Africa are also a blow to US global influence and part of a broader trend of democratic backsliding. Military coups are an opportunity for US adversaries to increase their influence, as demonstrated by Russian support for the juntas in Mali and Sudan.

US policymakers should be alarmed about Africa. The US is losing partners to instability and turns toward authoritarianism—and Salafi-jihadi groups are positioned to benefit. 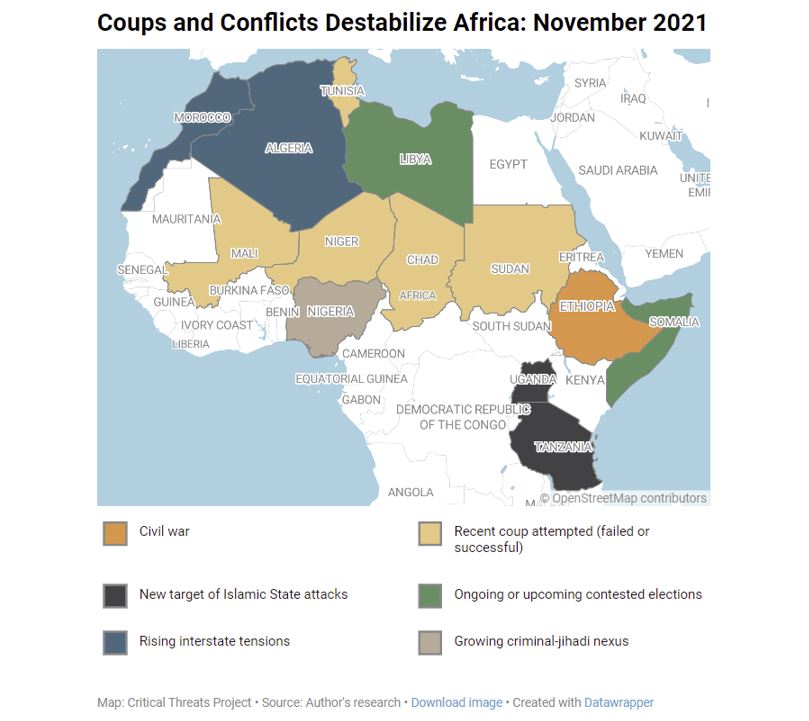 The political and security order in East Africa is collapsing. Ethiopia and Sudan are in crisis, Somalia’s counterterrorism apparatus is deteriorating, and the Islamic State poses a growing threat to Uganda and possibly Tanzania.

Ethiopia. The yearlong conflict in Africa’s second most populous country is becoming a nationwide catastrophe. Forces from Ethiopia’s northern Tigray region captured strategic positions en route to the capital Addis Ababa, causing the Ethiopian government to declare a state of emergency, tell residents to arm themselves, and round up ethnic Tigrayan civilians—continuing the trend of human rights violations perpetrated by the Ethiopian government and other participants in the conflict. Diplomats are working frantically to avert an attack on the capital, and Kenya increased security on its border in preparation for refugee flows.

Ethiopia is headed for long-term conflict and possibly the fragmentation of the state, which will cause a massive humanitarian crisis while opening opportunities for external players to compete for influence in East Africa. Salafi-jihadi groups will also benefit from this instability. The withdrawal of Ethiopian forces from the African Union Mission in Somalia (AMISOM) would create space for al Shabaab to expand near the Ethiopian border. Al Shabaab will likely also attempt to exploit grievances that arise in ethnic Somali communities in Ethiopia. On November 2, the cabinet of Ethiopia’s Somali Region *passed a resolution “to protect the self-rule of the Somali people,” signaling fear that a new ruling faction will oppress ethic Somali Ethiopians.

Sudan. The Sudanese military overthrew the civilian government on October 25, reversing a transition to democracy that the US had strongly supported. The military leadership draws support from external players, notably Egypt, Russia, Saudi Arabia, and the United Arab Emirates (UAE). The outcome of the coup is not yet set. Massive protests have constrained the junta’s behavior, and a power-sharing deal is emerging under international pressure. The outcome will likely favor the military even if a civilian authority is nominally installed or restored.

Sudan’s coup is yet another blow to democracy in northern Africa. Sudan and Algeria both saw massive protests in 2019. The uprising in Sudan led to the military’s ouster of longtime dictator Omar al Bashir, leading Sudan into a hopeful but fraught period of transition that has now faltered. Algeria’s protests led to the resignation of its longtime president and other superficial changes before the regime capitalized on COVID-19 lockdowns to largely snuff out the protest movement. These setbacks join the ongoing autocratic turn in Tunisia, commonly recognized as the lone democracy to emerge from the Arab Spring uprisings.

Salafi-jihadi groups may attempt to capitalize on worsening governance in Sudan. A recent crackdown on alleged Islamic State cells in Khartoum may signal increased Salafi-jihadi activity. More data is needed to assess whether Salafi-jihadi groups will see an opportunity to target the Sudanese regime or garner popular support. Sudan has historically been a transit or support zone for the Salafi-jihadi movement rather than a target.

Somalia. Internal conflict in Somalia is drawing security forces away from the fight against al Shabaab. The US is reviewing its support for elite units following their participation in *clashes with a Somali paramilitary group in October. The fighting reflected the worsening political situation inside Somalia. Politicians mobilized security forces against each other in the capital Mogadishu in April. Civil war was averted, but tensions remain high as the country enters a fraught election period. The withdrawal of most US forces from Somalia has likely contributed to US-trained forces’ growing entanglement in political battles. Meanwhile, al Shabaab has capitalized on reduced counterterrorism pressure and advanced on several fronts surrounding Mogadishu in 2021.

Uganda. An Islamic State affiliate began a bombing campaign in Uganda. This group, which is based in the neighboring Democratic Republic of the Congo (DRC) but originated in Uganda, is likely attempting to incite instability in Uganda and possibly draw Ugandan forces into a costly fight in the DRC.

Tanzania. Salafi-jihadi activity may also increase in Tanzania in the coming months. Counterterrorism pressure in northern Mozambique is pushing some members of an Islamic State branch to make cross-border incursions into Tanzania for supplies. A Tanzanian official previously connected an August shooting in the capital to the Mozambique insurgency. Setbacks in Mozambique may push the Tanzanian leaders and members of the Mozambique-based group to attempt to develop a clandestine network to conduct attacks in Tanzania. Tanzanian security forces likely have the capability to suppress this network, but they risk cracking down on civilian populations too harshly and creating a support base for the insurgency.

Mali. Mali has suffered two military coups since 2020. The military takeover has strained Mali’s relations with France, which leads a counterterrorism mission in Mali. The Malian government has sought a deal with a Russian private military company, raising tensions further with France and other European countries that have pledged to send troops to Mali. Mali’s military leaders have also *lashed out at regional organizations calling for a transition to civilian rule. Poor relations between Mali and its neighbors risks undermining long-running attempts to increase regional security coordination against al Qaeda and Islamic State affiliates in the Sahel. Tactical counterterrorism victories, such as French forces’ recent killing of the Islamic State’s Sahel leader, will not have lasting effects, particularly if Salafi-jihadi groups advance into gaps left by withdrawing security forces.

Other Sahelian countries are struggling to balance domestic challenges with counterterrorism pressures. Chad’s military installed the late president’s son as leader following his father’s death during a battle with a rebel group in April 2021. Chad has since announced plans to withdraw half its troops from a regional counterterrorism force. Niger, which hosts French and US forces and has faced an uptick in Islamic State attacks on security forces and civilians, rebuffed a coup attempt in March 2021.

Nigeria. Africa’s most populous country is facing a surge in kidnapping and “banditry” in its northwest. The violence has now reached the capital, with gunmen abducting staff and children from a university in Abuja on November 2. Criminal networks overlap with Salafi-jihadi networks, benefiting an increasingly well-armed Islamic State affiliate that is expanding in northeastern Nigeria. Nigerian officials’ claims about the death of key Salafi-jihadi leaders are suspect, given past premature reports, and may indicate that the Nigerian military is attempting to project strength as conditions worsen.

Libya. The US-backed push against the Islamic State in Libya in 2016 severely weakened the group, which has since operated at a very reduced level from Libya’s interior. The conditions that enabled the Islamic State’s rise persist, however, and prospects for peace in Libya remain shaky. The country is preparing for elections in December. Political deadlock and inter-militia violence threaten the process. Many armed actors may still turn to force if the elections do not go their way.

The Islamic State will take advantage if Libya slides back into civil war. Unrest in southwestern Libya already creates opportunities for the Islamic State, which resumed explosive attacks in mid-2021 after a yearlong lull. The Islamic State may now be increasing activity in coastal Libya, raising the risk that it will target institutions during the election or postelection period to heighten tensions and inhibit state formation in Libya.

Tunisia. Tunisia’s president has continued to consolidate power since suspending parliament in late July. President Kais Saied and his allies now appear to be using state power to target opposition media and political rivals. Salafi-jihadi groups remain weak in Tunisia following years of counterterrorism efforts, but this situation could change should Tunisia destabilize. The discrediting of Tunisian democracy and the exclusion of political Islamists may draw more recruits to Salafi-jihadi ideology over time.

Algeria and Morocco. Algeria-Morocco relations are deteriorating over the contested Western Sahara. Morocco claims Western Sahara, while Algeria supports Sahrawi nationalists. Algerian officials accused the Moroccan military of killing three Algerians traveling through or near Western Sahara on November 3 and promised a response, the latest spike in tensions since Algeria severed diplomatic ties with Morocco in August. War between Algeria and Morocco remains unlikely, but lower-level hostilities and diplomatic blows could still destabilize the region and draw security resources away from countering the Salafi-jihadi networks that both governments have largely suppressed until now.