A Reuters investigation of a document trove found in an abandoned Russian command post in Balakliya, Kharkiv Oblast, supports ISW’s longstanding assessments about the poor condition of Russian forces. ISW has long assessed that the conventional Russian military in Ukraine is severely degraded and has largely lost offensive capabilities since the summer of 2022, that Russian strategic commanders have been micromanaging operational commanders' decisions on tactical matters, and that Russian morale is very low. Reuters’ investigation found that Russian units near Balakliya were severely understrength, with a combat battalion at 19.6-percent strength and a reserve unit at 23-percent strength.[i] The investigation found that poor morale, bad logistics, and overbearing commanders contributed to Russian forces’ poor performance.[ii] The report found that the Russian Western Military District explicitly forbade a subordinate from withdrawing from an untenable position in the small village of Hrakove (which has an area of less than three square kilometers).[iii] Ukrainian forces defeated Russian forces in Balakiya and routed Russian forces in eastern Kharkiv Oblast around September 8-10.[iv]

Russian President Vladimir Putin’s rhetoric indicates that he is not interested in negotiating seriously with Ukraine and retains maximalist objectives for the war. Putin stated that Ukraine has “lost sovereignty” in a meeting with Commonwealth of Independent States (CIS) security officials on October 26.[v] Putin stated that the United States is using Ukraine as a “battering ram” against Russia, the Russian-Belarusian Union State, the Collective Security Treaty Organization, and the CIS. Russian State Duma Speaker Vyacheslav Volodin amplified this narrative, stating that “Ukraine has lost the ability to exist as a state,” “Ukraine is occupied by NATO,” and “[Ukraine] has become a colony of the US” on October 26.[vi] This language is incompatible with negotiations on an equal basis for a ceasefire, let alone a resolution to the conflict that Russia began. It instead strongly suggests that the Kremlin still seeks a military victory in Ukraine and regime change in Kyiv that would affect the permanent reorientation of Ukraine away from the West and into Russia’s control. It also indicates that Putin’s aims transcend the territory he has claimed to have annexed, let alone the areas his forces actually control.

Russian occupation officials in Kherson Oblast are attempting to mitigate the informational consequences of the chaos of the initial Russian withdrawals from the west bank of the Dnipro River. Kherson Oblast occupation head Vladimir Saldo stated on October 26 that it would be “practically impossible” to completely destroy the dam at the Kakhovka hydroelectric power plant (HPP) and that even the destruction of the dam locks at the HPP would only cause the water level of the Dnipro River to rise less than 2 meters.[vii] Saldo’s statement directly contradicts his own prior statements and the warnings made by Commander of Russian Armed Forces in Ukraine Army General Sergey Surovikin on October 18 that Ukraine is planning to strike the Kakhovka HPP and cause flood damage along the Dnipro River.[viii] Saldo’s apparent retraction of his own warnings may suggest that he seeks to quell anxiety accompanying the mass movement of civilians and Russian military and occupation elements across the Dnipro in order to preserve his own ability to rule. Saldo also issued assurances about the provision of basic utilities and financial services that he claimed will continue even as evacuations to the east bank are ongoing.[ix] Saldo’s statements indicate that his administration is attempting to mitigate panic in the information space, likely in order to maintain control of the population of Kherson Oblast against the backdrop of ongoing evacuations.

Russian officials continued to admit that Russia is deporting children to Russia under the guise of adoption and vacation schemes. Russian media reported on October 26 that the Russian Commissioner for Children’s Rights, Maria Lvova-Belova, adopted a Ukrainian child who was deported from Mariupol to Russia.[xi] Lvova-Belova claimed that Russian officials have brought 31 children from Mariupol to Russia and that her office is working to “rehabilitate” Ukrainian children from active combat zones. As ISW has previously reported, the forced adoption of Ukrainian children into Russian families may constitute a violation of the Convention on the Prevention and Punishment of the Crime of Genocide.[xii]

Russia is also continuing to use the excuse of recreational trips to deport Ukrainian children to Russia and Russian-occupied territory. Member of the Zaporizhia occupation administration Vladimir Rogov reported on October 26 that over 500 children from Enerhodar went on “vacation” in Yevpatoria, Crimea and Anapa, Krasnodar Krai this year alone.[xiii] Rogov claimed that the children received “new knowledge” as part of the “educational program.”[xiv] Russian-appointed governor of Sevastopol Mikhail Razvozhaev similarly claimed that children from occupied Kherson City and Enerhodar took part in “excursions” in Sevastopol.[xv] These reports are consistent with ISW‘s previous observations that Russian officials have used the veneer of such recreation and rehabilitation programs to justify the deportation of Ukrainian children to Russian-controlled territory and areas of the Russian Federation.[xvi]

On October 26, Wagner Group financier Yevgeniy Prigozhin denied ISW’s report that Prigozhin confronted Putin and other siloviki factions in the Kremlin regarding the progress of the Russian war in Ukraine.[xvii] Prigozhin explicitly denied ISW’s October 25 assessment and falsely insinuated that ISW receives classified intelligence. ISW does not receive any classified material from any source, uses only publicly available information, and draws extensively on Russian, Ukrainian, and Western reporting and social media as well as commercially available satellite imagery and other geospatial data as the basis for these reports.  ISW specifically does not receive information from Prigozhin’s deceased mother-in-law, as he (ironically) suggested. 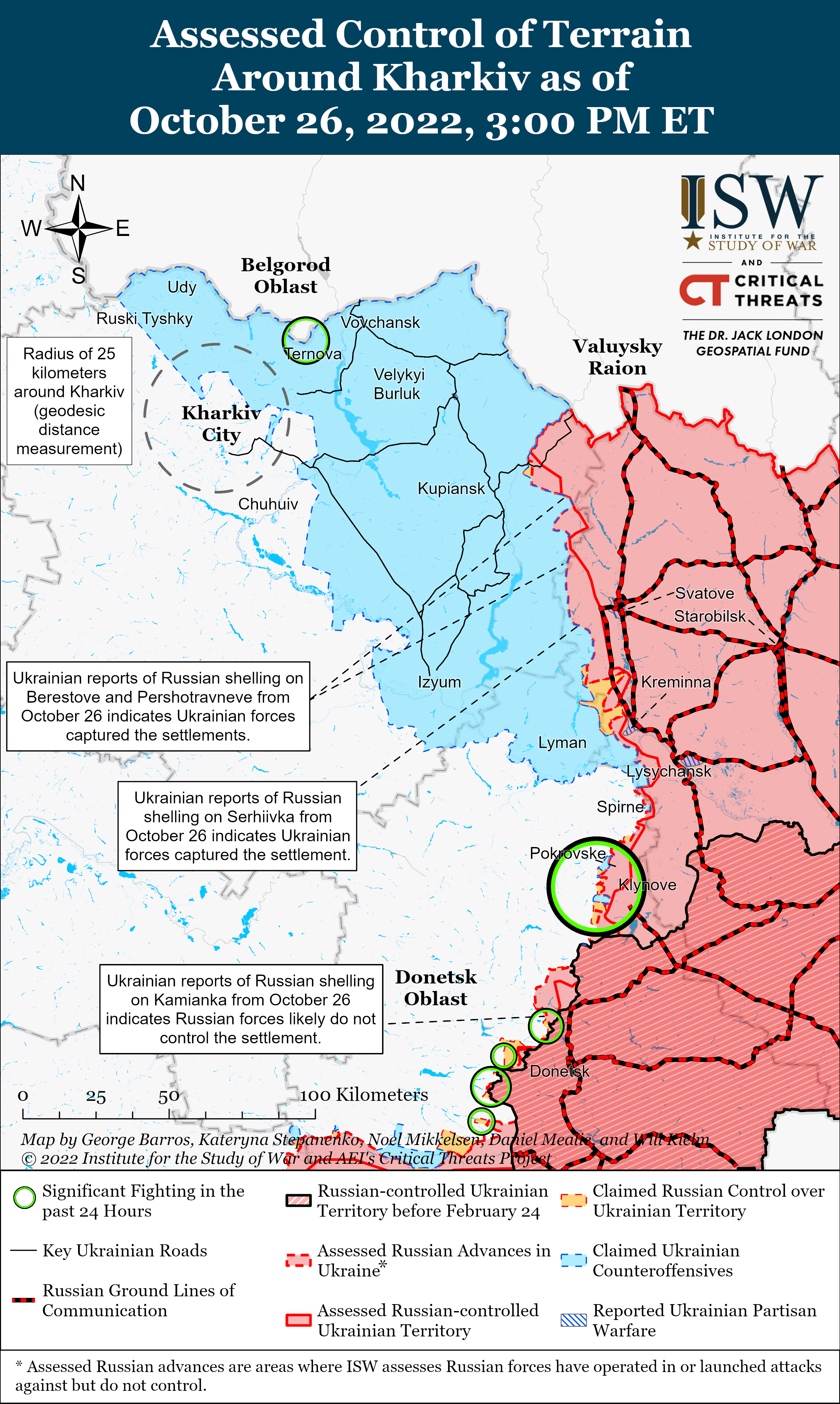 Russian sources claimed that Ukrainian forces continued to conduct counteroffensive operations in northwestern Kherson Oblast on October 26. Russian sources claimed that units of the Russian Airborne Forces (VDV) and the 42nd Motorized Rifle Division of the 58th Combined Arms Army repelled a Ukrainian assault toward Ischenka in the vicinity of Davydiv Brid.[xxix] The Russian MoD claimed that Russian forces also repelled Ukrainian assaults north of the Beryslav-Nova Kakhovka area near Bruskynske (39km northwest of Beryslav), Piatykhatky (38km north of Beryslav), and Koshara (32km north of Beryslav) in northwestern Kherson Oblast.[xxx] Elements of the Russian 11th Guards Air Assault Brigade are reportedly operating in northeastern Kherson Oblast, likely near or in the Beryslav Raion.[xxxi] 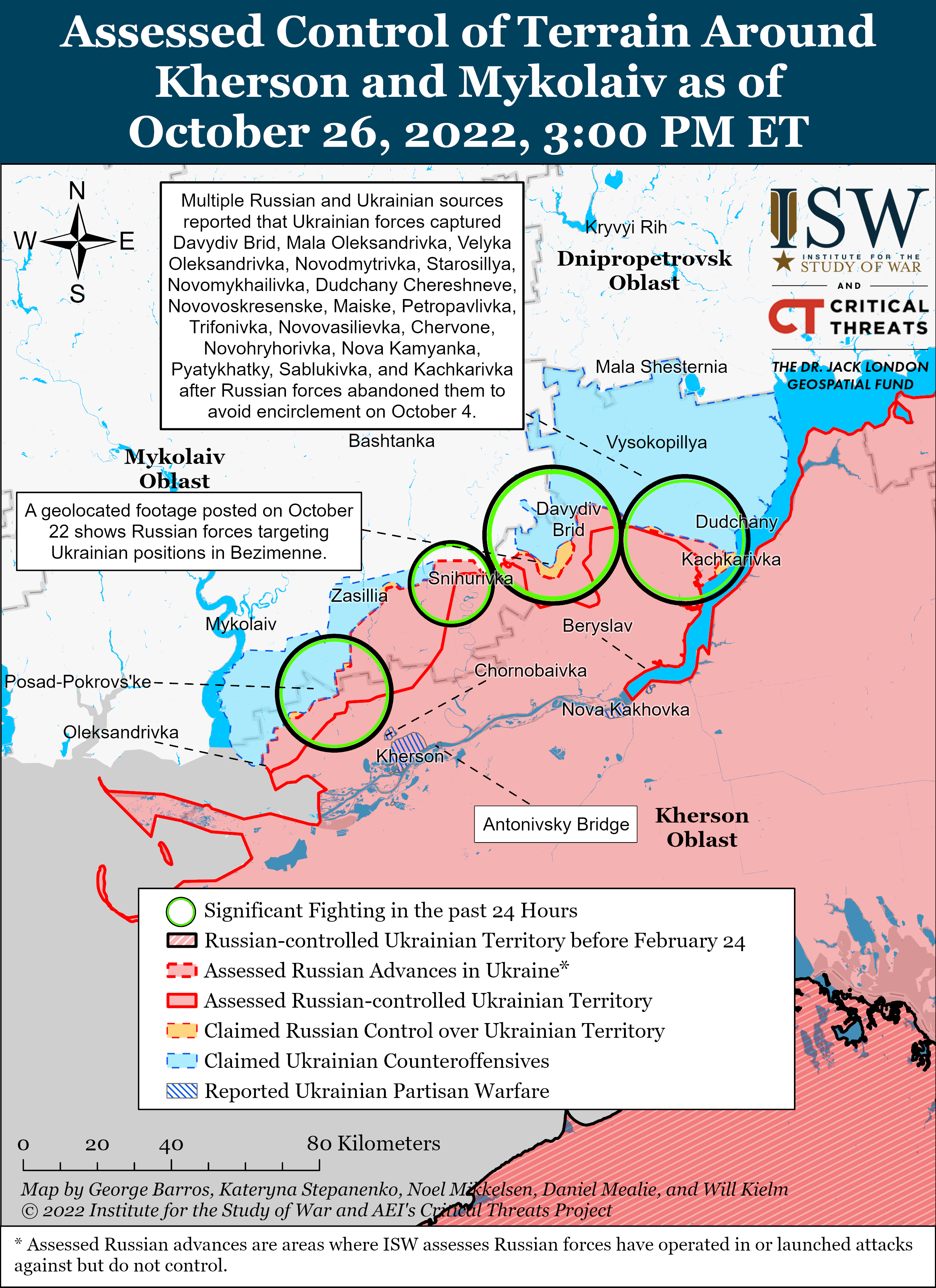 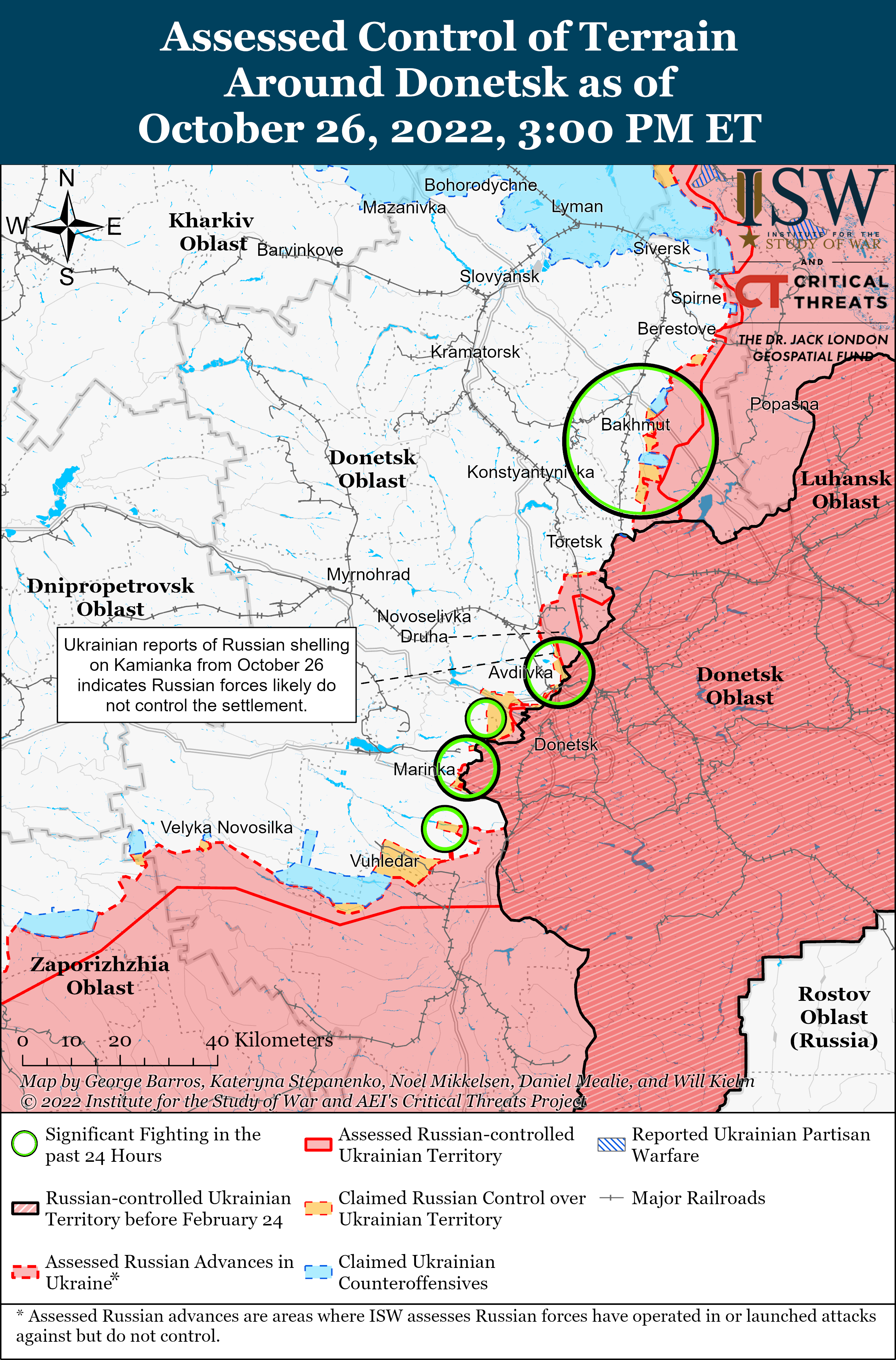 The Russian military is reportedly trying to leverage foreigners to support its war in Ukraine. Foreign Policy reported on October 25 that Russian actors—reportedly of Russia’s Wagner Group—are contacting members of the US-trained Afghan National Army Commando Corps to recruit them to join a Russian “foreign legion” to fight in Ukraine.[xliii] Foreign Policy reported that many of these well-trained former soldiers have been in hiding since the Taliban took control of Afghanistan in 2021 and are without stable jobs or personal security, which means that up to 10,000 of these commandos may be vulnerable to Russian offers. The Ukrainian Resistance Center reported that Belarusian military commissariats in Gomel Oblast mobilized Belarusian drivers and mechanics to repair Russian military equipment in Belarus.[xliv] The Kremlin likely seeks to augment its war effort with foreign elements as Russian combat forces continue to face acute personnel shortages.

Local Russian military commissariats continue to contradict Russian regional governors. Military Commissar of Crimea Yevgeny Kutuzov promised that Crimea would complete its partial mobilization by November 1, in time for the start of the fall conscription cycle, as ISW previously forecasted.[xlv] Russian occupation Governor of Crimea Sergey Aksenov stated that mobilization activities in Crimea ended on September 25.[xlvi] Fissures between regional Russian officials, the Russian Ministry of Defense and military commissariats, and the Russian civilian population from which mobilized forces are drawn will likely intensify in the coming months.[xlvii]

Russian sources are complaining that the Russian Ministry of Defense is not maintaining contact with Russian forces and prisoners of war (POWs) in Ukraine. Russian journalist Anastasia Kashevarova wrote a public complaint on October 26 that an entire Russian company of mobilized men of the 55th Motorized Rifle Brigade operating near Svatove are without command.[xlviii] Thirteen Russian mobilized men in a platoon of the 15th Motorized Rifle Regiment of the 2nd Guards Taman Motorized Rifle Division filmed a video in which they stated they hid in an empty house near Svatove after their unit’s defeat. The men report they had no connection with their company commander or the rest of command.[xlix] A Russian milblogger complained that Russian officials are abandoning Russian POWs in Ukraine and implored Russian authorities to do something to help Russian POWs.[l]

The United Kingdom Ministry of Defense (UKMOD) seemingly attributed an October 24 attack targeting a Russian rail line in Bryansk Oblast to a Russian anti-war group.[li] Unknown actors destroyed a segment of rail in Novozybykovo, Bryansk Oblast, about 15 km from the Russian-Belarusian border, with an explosive device on October 24.[lii] The UKMOD reported that a Russian anti-war group called “Stop the Wagons” claimed responsibility for the attack and did not provide any further comment.[liii] Belarusian opposition elements reportedly have conducted sabotage against Belarusian railways since February.[liv] Russian military mobilization may be promoting similar actions from disaffected Russians.