Russia is likely continuing to prepare for a false flag attack on the Kakhovka Hydroelectric Power Plant (HPP). Ukrainian President Volodymyr Zelensky stated on October 20 that Russian forces mined the dam of the Kakhovka HPP and noted that the HPP holds over 18 million cubic meters of water, which would cause massive and rapid flooding of settlements along the Dnipro River, including Kherson City.[1] Zelensky emphasized that the flooding would impact hundreds of thousands of people.[2]  Russian sources, however, continued to accuse Ukrainian forces of shelling the Kakhovka HPP and have widely circulated graphics depicting the flood path in the event of a dam breach.[3] As ISW reported on October 19, Russian sources are likely setting information conditions for Russian forces to blow the dam after they withdraw from western Kherson Oblast and accuse Ukrainian forces of flooding the Dnipro River and surrounding settlements, partially in an attempt to cover their retreat further into eastern Kherson Oblast.[4] Continued Russian preparation for a false-flag attack on the Kakhovka HPP is also likely meant to distract from reports of Russian losses in Kherson Oblast.

The White House confirmed on October 20 that Iranian military personnel are in Russian-occupied Crimea, Ukraine, to assist Russian forces in conducting drone attacks on Ukrainian civilians and civilian infrastructure. US National Security Council Spokesperson John Kirby told reporters that “a relatively small number” of Iranian personnel are in Crimea to train Russian personnel in the use of unfamiliar Iranian-made drones.[8] Kirby emphasized that “Tehran is now directly engaged on the ground and through the provision of weapons that are impacting civilians and civilian infrastructure in Ukraine, that are killing civilians and destroying civilian infrastructure in Ukraine” and warned that Russia and Iran will continue to lie about their partnership. Russian officials have continued to deny their purchase of Iranian drones, but the existence of the deal is increasingly common knowledge even within Russia. A member of the Russian Ministry of Defense Public Council, Ruslan Pukhov, believed he was not being recorded when he told a Russian television host live on air on October 20 that “we won’t rock the boat too much, so I ask you not to [focus] too much on those Iranian [drones], like that classic story: ‘you have an ass but no word for it.’ We all know that they’re Iranian, but the authorities are not admitting that.”[9] Iranian officials have also denied the sales despite the widespread Russian use of Iranian drones in Ukraine since mid-September, but Iranian Supreme Leader Ali Khamenei boasted on October 19 that ”a few years ago, when pictures of [Iran’s] advanced missiles & drones were published, they said they’re photoshopped pictures! Now they say Iranian drones are dangerous [and ask] why do you sell them to so & so?”[10]

Iran is providing military support to Russian forces in Ukraine despite new international sanctions likely in part because Iranian leaders believe that they need Moscow’s help to upend the US-led global order. The European Union imposed additional sanctions on Iranian officials and the manufacturer of the Shahed-136 drones that Iran has sold to Russia for use in Ukraine on October 20.[11] Senior Iranian officials and state media frequently argue that Tehran must expand strategic relations with Russia and China to cooperate toward countering US global influence.[12] Iranian leaders may worry that a Russian failure in Ukraine would seriously disrupt this vision and possibly threaten Vladimir Putin’s hold on power and, therefore, Iran’s security. Iran could further expand its military support to Russia in the coming months.

The risk of a Russian offensive from Belarus into northern Ukraine remains low despite a prominent Ukrainian official’s October 20 warning that the risk of a Russian offensive from Belarus is “growing.” The deputy chief of the Main Operational Department of the Ukrainian General Staff, Brigadier General Oleksiy Hromov, stated that the risk of a renewed offensive from Russian forces against northern Ukraine is growing.[13] Hromov stated that Russian forces may attack northwest Ukraine to disrupt Ukrainian supply lines from Western partner countries. Such a course of action remains unlikely in the coming months given that Russian forces lack the capability even to interdict Ukrainian supply lines from the west with a ground offensive. The nearest Ukrainian east-west rail line is 30 km from the Belarusian border, and the Pripet Marshes in northern Ukraine and Belarus make maneuver warfare across the international border in Volyn and Rivne oblasts exceptionally difficult. Ukraine’s road and rail network has sufficient nodes with Poland, Romania, Slovakia, and Hungary that a Russian incursion from Belarus could not seriously degrade Ukrainian logistical lines without projecting deeper into Ukraine than Russians did during the Battle of Kyiv, when Russian forces were at their strongest. Those forces are now significantly degraded. A Russian milblogger reiterated on October 20 that the Russian force group in Belarus is too small to threaten Kyiv.[14] White House National Security Council spokesperson John Kirby reiterated on October 20 that Belarus may concentrate manpower on the border to fix Ukrainian forces in northern Ukraine and prevent their deployment to the active area of operation in southern and eastern Ukraine, as ISW has assessed.[15] 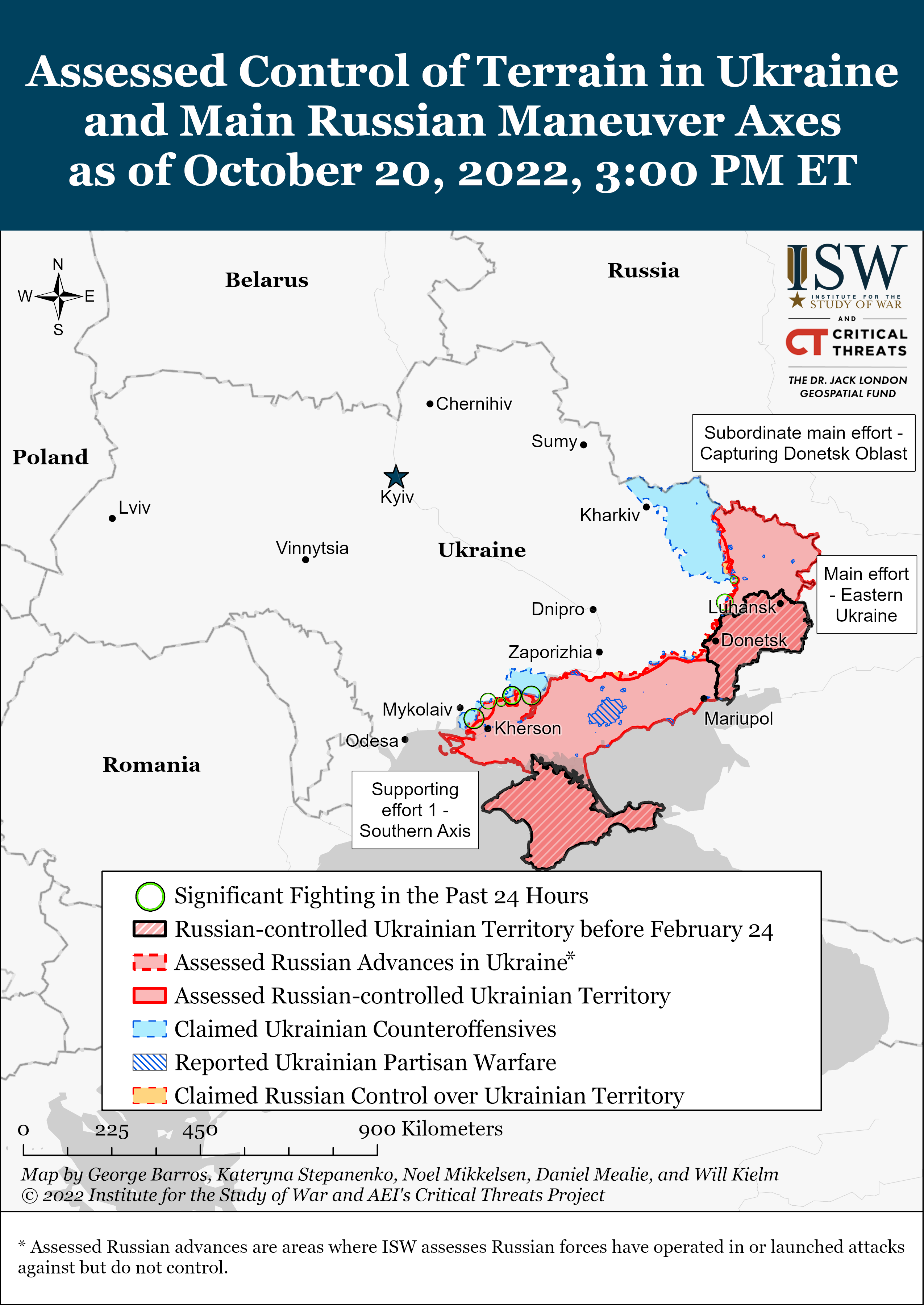 Russian sources continued to claim that Russian forces are consolidating limited positions in northeastern Kharkiv Oblast on October 20 that Russian forces allegedly regained over the last few days. Several Russian milbloggers claimed that Russian troops took control of a segment of the railway line in Horobivka, 16km northeast of Kupyansk.[16] However, Ukrainian Kharkiv Oblast Head Oleh Synehubov noted that Ukrainian troops have liberated all but 1.8 percent (32 unspecified villages) of an unspecified area of Kharkiv Oblast, which suggests that unsubstantiated Russian claims of regained territory in this area likely reflect extremely limited gains compared to the recent sweeping Ukrainian counteroffensive that retook almost the entire oblast.[17] ISW’s maps currently depict about 3-4 percent of Kharkiv Oblast under Russian control or advances. ISW will update its maps as soon as it has sufficient data to further clarify the control of terrain.

Russian and Ukrainian forces likely continued fighting along the Svatove-Kreminna line on October 20. Ukrainian Luhansk Oblast Head Serhiy Haidai reported heavy fighting along the frontline in the directions of Kreminna and Svatove.[18] The Ukrainian General Staff reported that Ukrainian troops repelled a Russian attack near Bilohorivka, about 10km south of Kreminna in the vicinity of Lysychansk.[19] Several Russian sources discussed continued Ukrainian attempts to cross the Zherebets River west of Kreminna around Nadiya, Stelmakhivka, Makiivka, and Yampolivka, each about 15km west of Kreminna.[20] 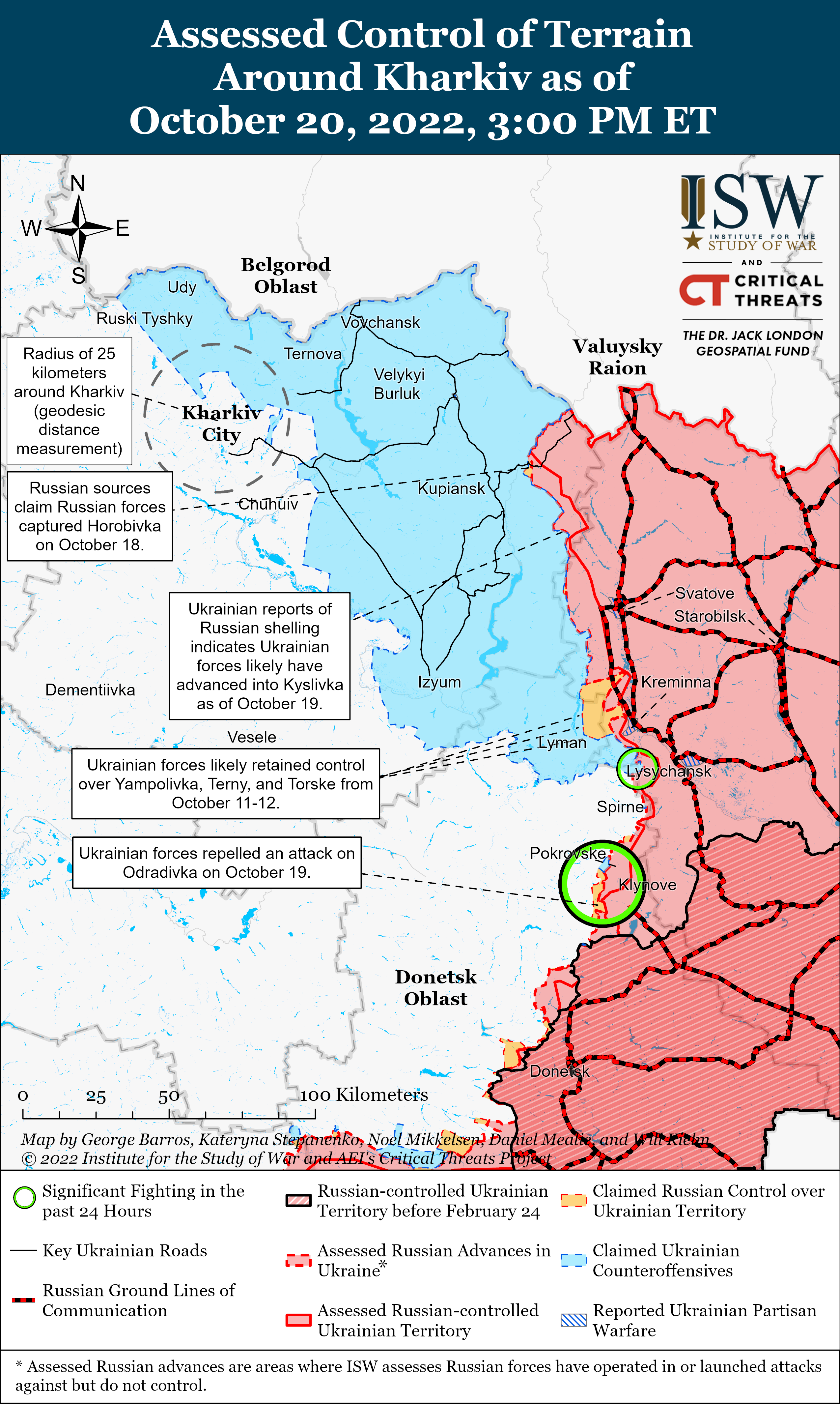 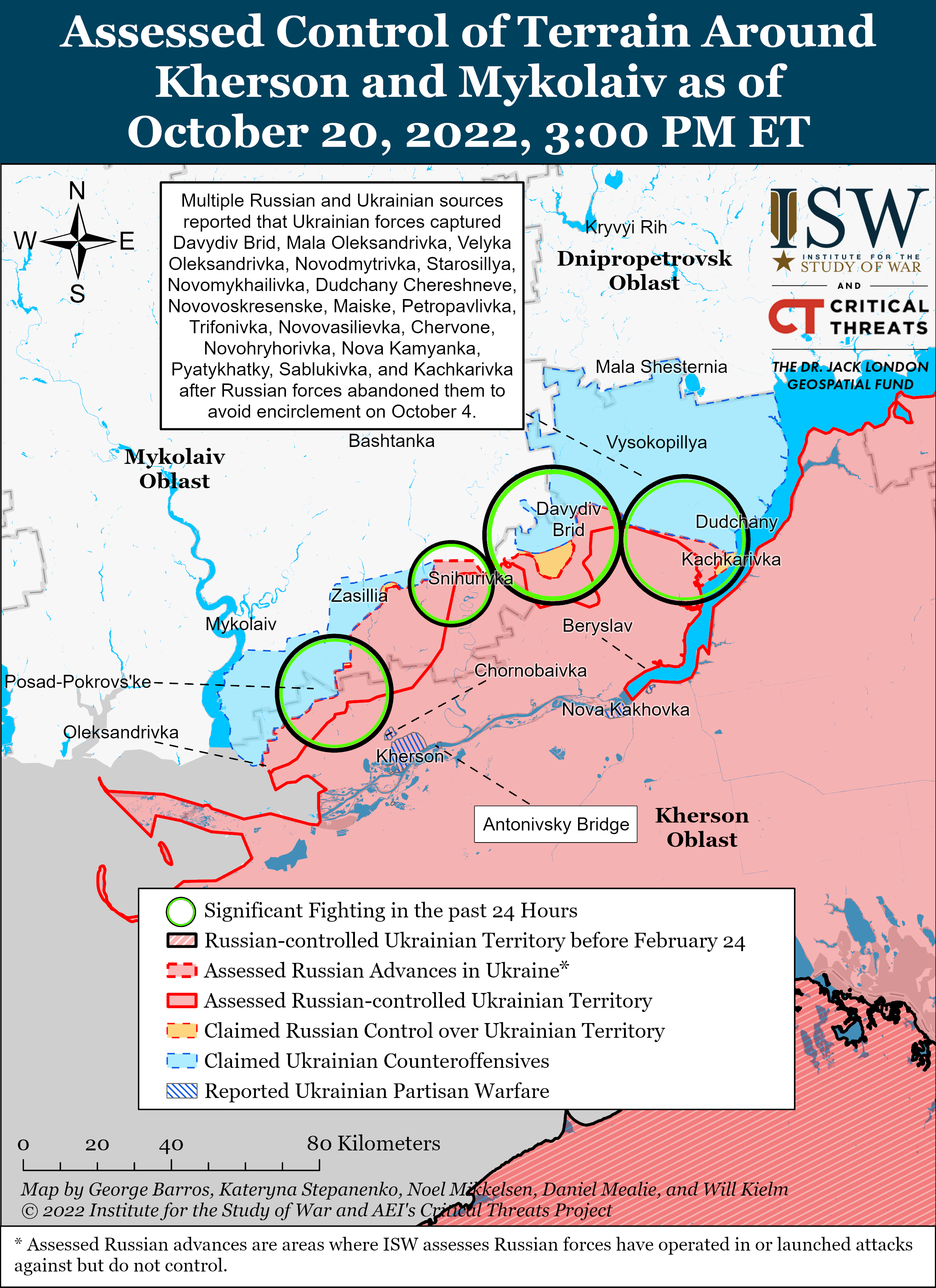 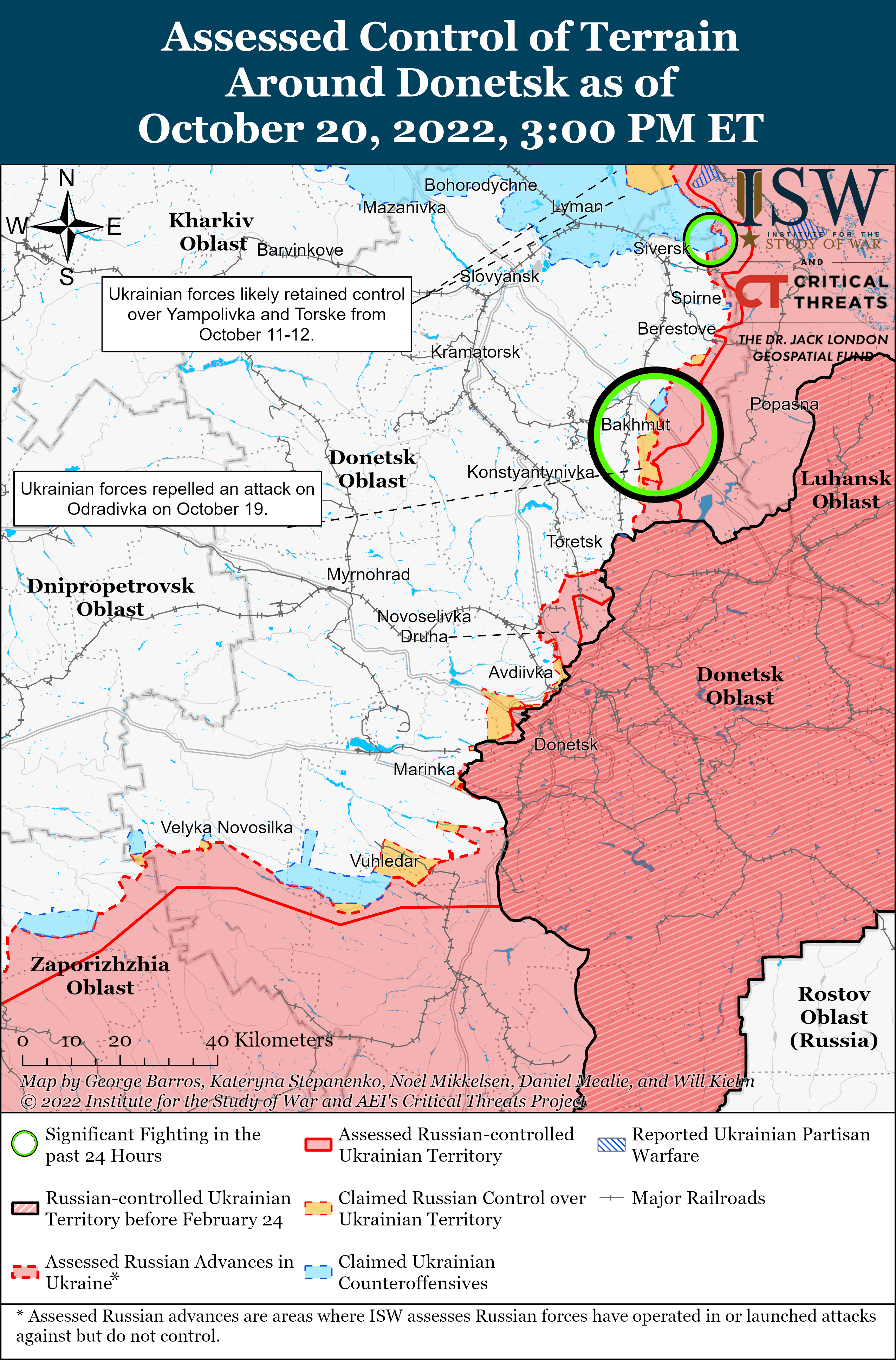 Russian regional governments and the Russian Ministry of Defense (MoD) continue to blame each other for military administrative failures. Russian MoD officials mobilized a Russian physical education teacher in Pskov Oblast despite the Pskov Oblast governor’s previous statement that physical education teachers are exempt from mobilization.[42] A local Pskov Russian Telegram channel commented on the conflict between the Pskov Oblast governor and local MoD-run military commissariat, noting that local military registration and enlistment offices pay little attention to what Russian governors want or say.[43]  Family members of Russian servicemembers from Kursk Oblast complained to the local government about the lack of information about their family members fighting in Ukraine’s Kharkiv Oblast.[44] Soldiers’ relatives contacted Kursk Oblast government officials and stated neither the governor nor the military commissariat knows where their relatives’ unit is currently deployed. Kursk Oblast Governor Roman Starovoit publicly deflected responsibility, stating that “all military commissariat and enlistment offices relate to the [MoD] and are not under the jurisdiction of the Kursk Oblast Administration.”[45]

Russian authorities continue mobilizing Russian men at least into November 2022 despite increasingly framing mobilization as complete. Ukrainian Deputy Defense Minister Hanna Malyar stated that Russian leadership will continue its “first stage” of mobilization until November 25.[46] Russian President Vladimir Putin previously stated on October 14 that mobilization would be over “within about two weeks” (around October 28).[47] Putin claimed that Russia had already mobilized 220,000 people as of October 14. Magadan Oblast Governor Sergei Nosov announced that Magadan Oblast completed its mobilization on October 20.[48] Malyar stated on October 20 that Russian forces have mobilized approximately 200,000 people, about two-thirds of the target of 300,000 as of October 20.[49]

The Russian military continues to face difficulties in procuring body armor for Russian forces. Russian Federation Council Senator Lyudmila Narusova complained of the almost 2,000-percent increase in Russian body armor prices, up to 135,000 rubles (almost $2,200), since January 2022 and called on Russian antimonopoly authorities to investigate.[50] A Russian milblogger reported that the situation with Russian mobilized men having bad equipment is improving in terms of public attention and prioritization but that Russian troops are still receiving bad equipment. The milblogger argued that Russian forces receiving body armor may not make a difference since Russian body armor issued to mobilized forces demonstrably does not protect against small arms.[51]