The overall pace of operations along the frontline has slowed in recent days due to deteriorating weather conditions but is likely to increase starting in the next few weeks as temperatures drop and the ground freezes throughout the theater. Ukrainian and Russian reporting from critical frontline areas throughout eastern and southern Ukraine, including Svatove, Bakhmut, and Vuhledar, indicates that operations on both sides are currently bogged down by heavy rain and resulting heavy mud.[1] Temperatures are forecasted to drop throughout Ukraine over the next week, which will likely freeze the ground and expedite the pace of fighting as mobility increases for both sides. The temperature in areas in Ukraine’s northeast, such as along the Svatove-Kreminna line, will dip to near-or-below-freezing daily highs between November 28 and December 4. It will likely take the ground some days of consistent freezing temperatures to solidify, which means that ground conditions are likely to be set to allow the pace of operations to increase throughout Ukraine over the course of the weekend of December 3-4 and into the following week. It is unclear if either side is actively planning or preparing to resume major offensive or counter-offensive operations at that time, but the meteorological factors that have been hindering such operations will begin lifting.

Russian officials are continuing efforts to deport children to Russian under the guise of medical rehabilitation schemes and adoption programs. The Ukrainian Resistance Center reported on November 26 that the Russian occupation administration in Luhansk Oblast conducted medical examinations of 15,000 children between the ages of two and 17 and found that 70% of the children (10,500) are in need of “special medical care” that requires them to be removed to Russia for “treatment.”[2] The Resistance Center stated that Russian officials intend these forced deportation schemes to lure children’s families to Russia to collect their children after the children receive treatments, at which point the Resistance Center assessed Russian officials will prevent those families from returning home to Ukraine. The Center‘s report is consistent with ISW’s previous assessment that Russian officials are conducting a deliberate depopulation campaign in occupied Ukrainian territories.[3]

Russian Commissioner for Children’s Rights Maria Lvova-Belova additionally posted an excerpt from a documentary film chronicling the story of the children she adopted from Mariupol.[4] Lvova-Belova has largely been at the forefront of the concerted Russian effort to remove Ukrainian children from Ukrainian territory and adopt them into Russian families, which may constitute a violation of the Geneva Convention as well as a deliberate ethnic cleansing campaign.[5] Lvova-Belova's documentary is likely meant to lend legitimacy to the ongoing adoption of Ukrainian children into Russian families, just as the guise of medical necessity is likely intended to justify mass deportations of Ukrainian children to Russian territory.

Head of the Chechen Republic Ramzan Kadyrov reported that he met with Russian President Vladimir Putin on November 25 and claimed that they discussed the participation of Chechen units in the war in Ukraine and the creation of new Russian military and Rosgvardia units comprised of Chechen personnel.[10] ISW has previously reported that Kadyrov routinely promotes his efforts to create Chechen-based parallel military structures.[11] Russian officials may be further promoting Kadyrov’s existing parallel military structures and Sarkisyan’s efforts to create a private military company to counteract the growing influence of Prigozhin, whom ISW has previously assessed uses his own parallel military structures to establish himself as a central figure in the Russian pro-war ultranationalist community.[12]

Russian forces are likely using inert Kh-55 cruise missiles in their massive missile strike campaign against Ukrainian critical infrastructure, further highlighting the depletion of the Russian military’s high precision weapons arsenal. The United Kingdom Ministry of Defense (MoD) reported on November 26 that Russia is likely removing nuclear warheads from ageing Kh-55 missiles and launching the missiles without warheads at targets in Ukraine.[13] The UK MoD suggested that Russian forces are likely launching the inert missiles as decoys to divert Ukrainian air defenses.[14] Ukrainian officials have previously reported that Russian forces have extensively used the non-nuclear variant of the missile system, the Kh-555, to conduct strikes on critical Ukrainian infrastructure since mid-October.[15] The Russian military’s likely use of a more strategic weapon system in the role of a decoy for Ukrainian air defenses corroborates ISW’s previous reporting that the Russian military has significantly depleted its arsenal of high-precision missiles.[16] The use of more strategic weapons systems in support of the campaign against Ukrainian infrastructure suggests that the Russian military is heavily committed to the strike campaign and still mistakenly believes that it can generate strategically significant effects through that campaign. 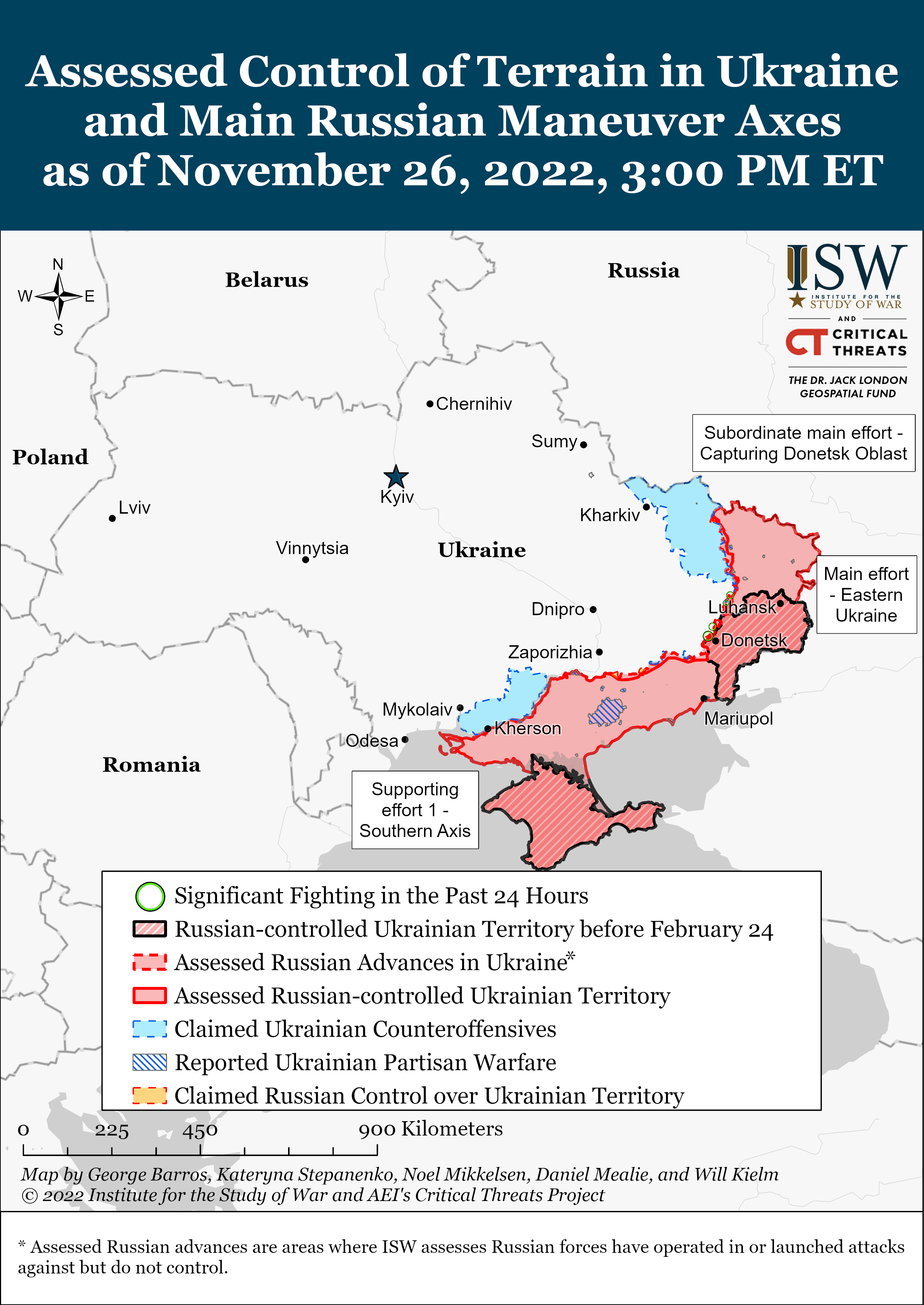 Russian forces continued defensive operations against ongoing Ukrainian counteroffensives along the Svatove-Kreminna line on November 26. The Ukrainian General Staff reported that Russian troops are conducting active defense operations northwest of Svatove in the direction of Kupyansk and west of Kreminna in the direction of Lyman.[17] Russian sources continued to discuss marginal Russian advances within Novoselivske, 15km northwest of Svatove.[18] The Russian Ministry of Defense (MoD) claimed that Russian troops repelled Ukrainian attacks on Kolomychikha (10km west of Svatove) and Ploshchanka (15km north of Kreminna).[19] Ukrainian Luhansk Oblast Head Serhiy Haidai noted that Ukrainian troops are continuing to succeed around Svatove and Kreminna, partially due to the low quality and incoherence of mobilized Russian recruits operating in the area.[20] Haidai reported that Ukrainian troops are additionally defending against continual Russian attacks on Bilohorivka, 10km south of Kreminna.[21] 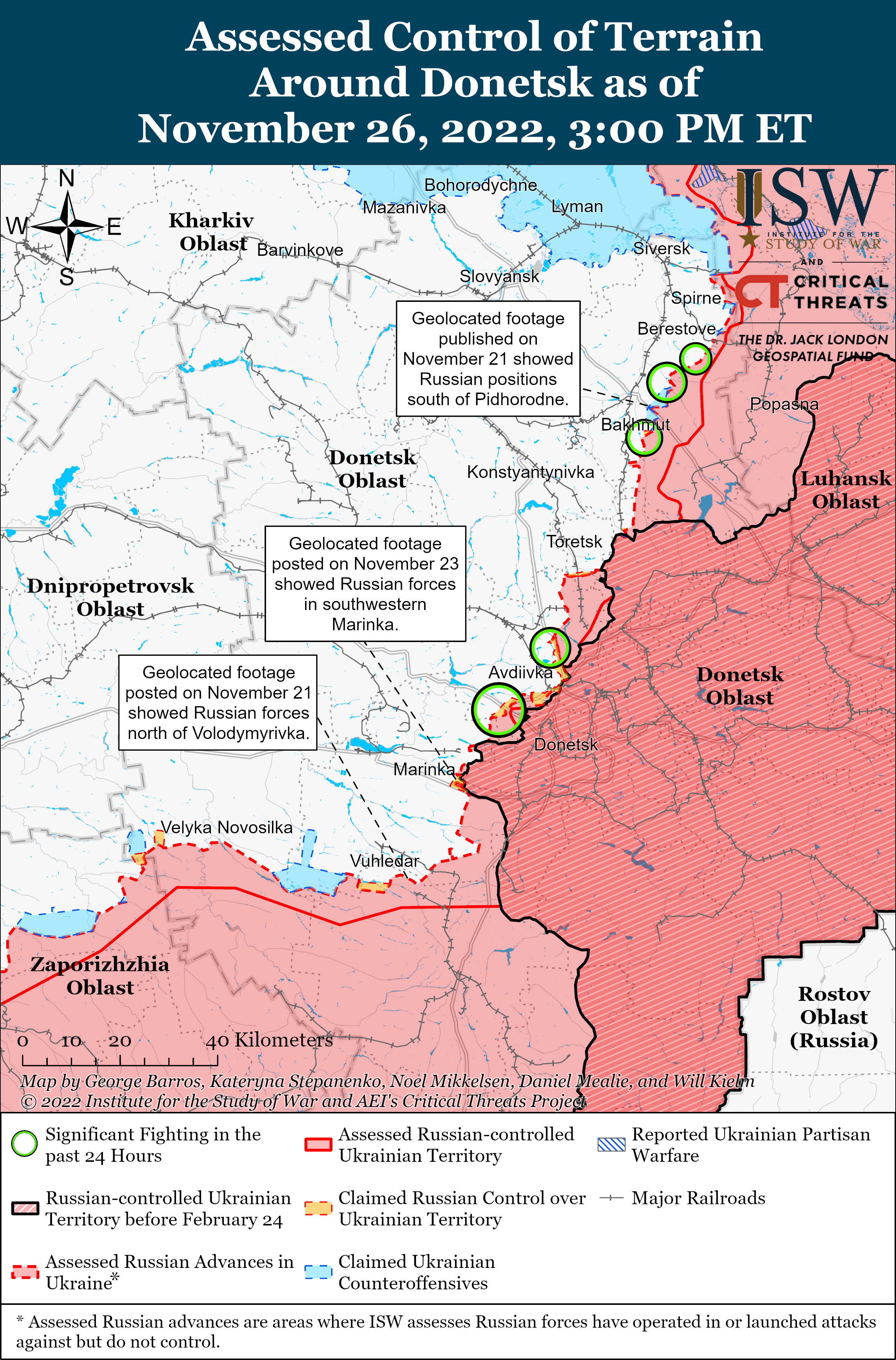 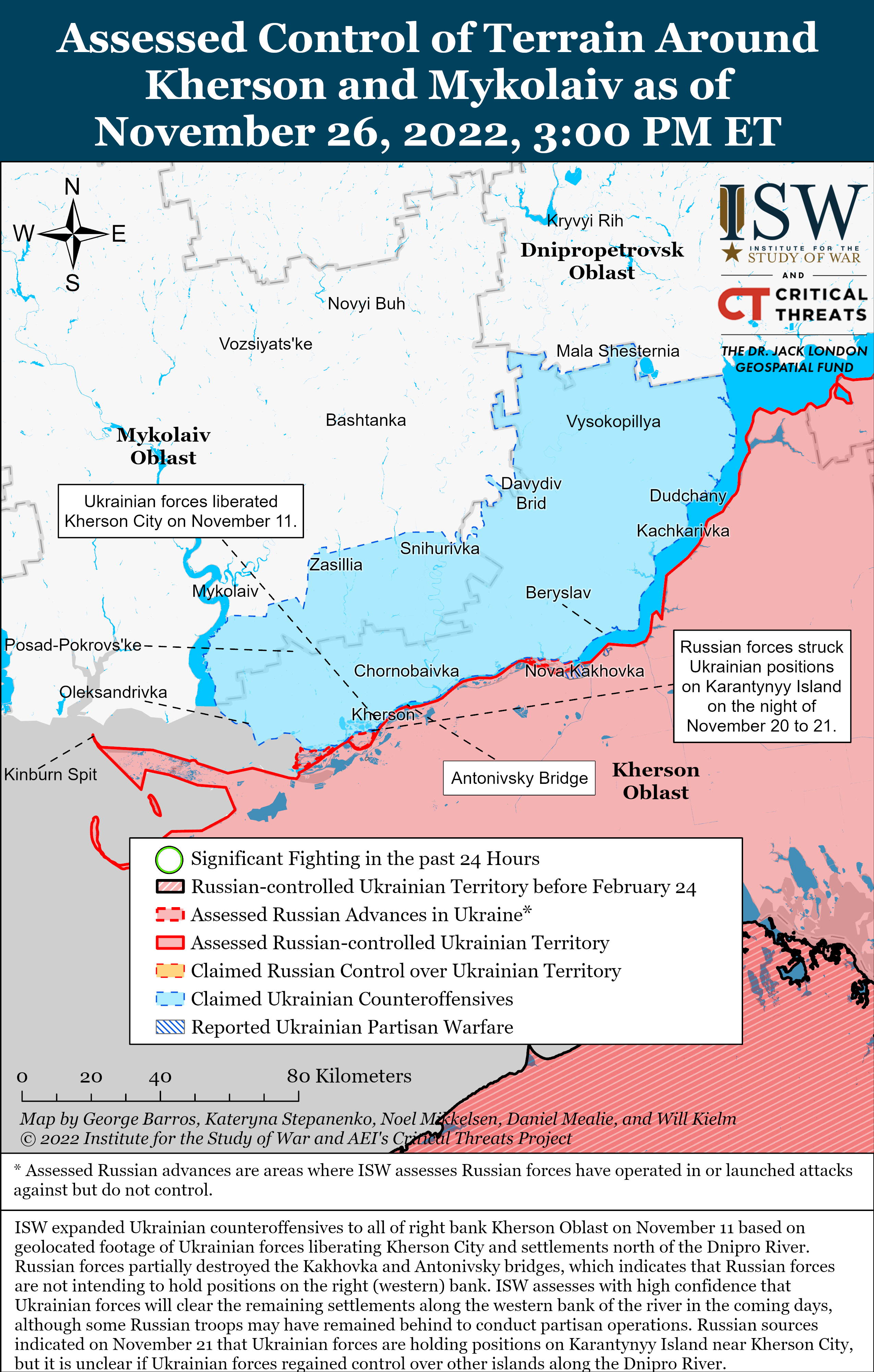 Russian tactical, logistical, and equipment failures continue to decrease the morale of Russian troops and drive searches for scapegoats. Donetsk People’s Republic (DNR) First Deputy Information Minister Danil Bezsonov claimed on November 25 that “the mistakes of military authorities of all levels” forced Russian President Vladimir Putin to order unpopular partial mobilization.[40] Bezsonov alleged that Russian military authorities are relying on the mobilized personnel to correct authorities’ planning mistakes while leaving mobilized soldiers in poor conditions.[41] A prominent Russian milblogger described “extremely outdated equipment” with which mobilized soldiers were photographed during training in Kostroma as “depressing.”[42] Another Russian milblogger lamented the inability of Russian forces to defend against Ukrainian drones without anti-drone systems, thermal imagers, drones, and radio stations.[43] The milblogger blamed wealthy elites for their failure to understand the importance of anti-drone warfare.[44] The Ukrainian General Staff stated on November 26 that Russian authorities continue to struggle to provide logistical support for mobilized soldiers.[45] Russian civilians are reportedly decreasingly willing to support material drives to fill that gap, though civilian collection drives for mobilized soldiers are ongoing.[46]

Actors in the Russian information space have been divided on whether to accept complaints of Russian soldiers as guidance for improvement or to quash them for decreasing faith in Russian military leadership, as ISW has previously reported.[47] Donetsk People’s Republic (DNR) First Deputy Information Minister Danil Bezsonov argued that mobilized soldiers deserve proper treatment, equipment, weapons, and attention and have the right to complain about a lack of proper equipment on November 25.[48] Bezsonov stated the mobilized do not have the right to complain about spending the night on the floor of a military recruitment office or about harsh conditions on the front.[49]

A Russian source framed Russian President Vladimir Putin’s November 25 creation of an electronic state information resource for information on citizens registered with the military as a resource useful in supporting better provisioning of soldiers fighting Ukraine.[50] The database is projected to begin working on April 1 to coincide with spring conscription.[51]

The Kremlin continues to respond disproportionately to limited domestic resistance to Russia’s war in Ukraine. A prominent Russian news source reported on November 25 that Russian authorities created three additional police controls and dispatched almost a dozen police and Federal Protective Service personnel (FSO) to patrol the Kremlin walls around the clock after an unidentified individual wrote “no to war” on the wall of the Kremlin.[55] The scale of such a response indicates continued Kremlin concern over domestic resistance and commitment to shaping the domestic information space and/or for the security of the Kremlin itself.