There were no claimed or assessed Russian territorial gains in Ukraine on July 6 for the first time in 133 days of war, supporting ISW’s assessment that Russian forces have largely initiated an operational pause.[1] The Russian Defense Ministry claimed territorial gains every day from the start of the war but has not claimed any new territory or ground force movements since completing the encirclement of Lysychansk on July 3.[2] However, Russian forces still conducted limited and unsuccessful ground assaults across all axes on July 6.[3] Such attempts are consistent with a Russian operational pause, which does not imply or require the complete cessation of active hostilities. It means, in this case, that Russian forces will likely confine themselves to relatively small-scale offensive actions as they attempt to set conditions for more significant offensive operations and rebuild the combat power needed to attempt those more ambitious undertakings.

The Kremlin continued to set conditions for the crypto-mobilization of the Russian economy in anticipation of protracted operations in Ukraine. The Russian State Duma adopted the third and final reading of a law introduced by the cabinet of ministers on June 30 that will allow the Russian government to oversee and regulate labor relations in Russian enterprises (both state and privately-owned).[4] This law, as ISW has previously reported, will allow government officials to recall workers from personal vacations, reschedule time off without employee consent, and require employees to work weekends, holidays, and nights. These measures allow the Kremlin to take much more direct control of most aspects of the Russian economy, including suspending rights and protections some workers would normally have.[5] The law must still be sent to the Federation Council before it reaches Russian President Vladimir Putin and is officially published, but the Kremlin is likely seeking to use the law to leverage domestic labor to maximize economic output and prepare for protracted operations in Ukraine.[6] Russia’s largest lead production plant reportedly stopped production on July 6 due to the almost-total halt of Russian metallurgical exports, and the Kremlin will likely continue to take measures to codify economic mobilization to offset or mitigate the effects of sanctions and the war on essential industries.[7] 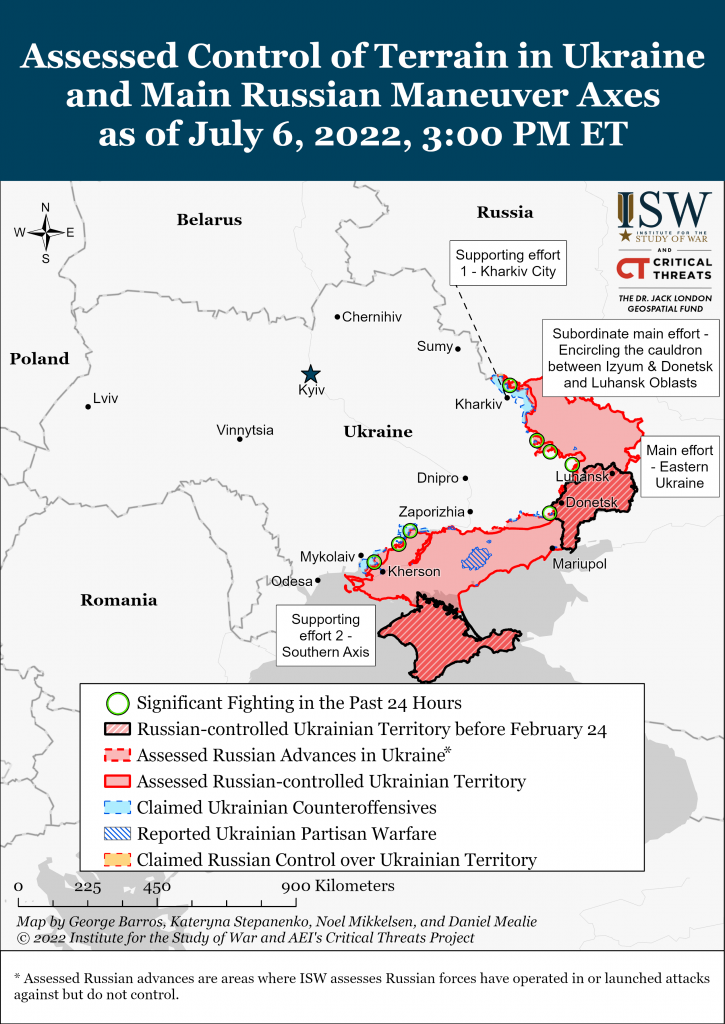 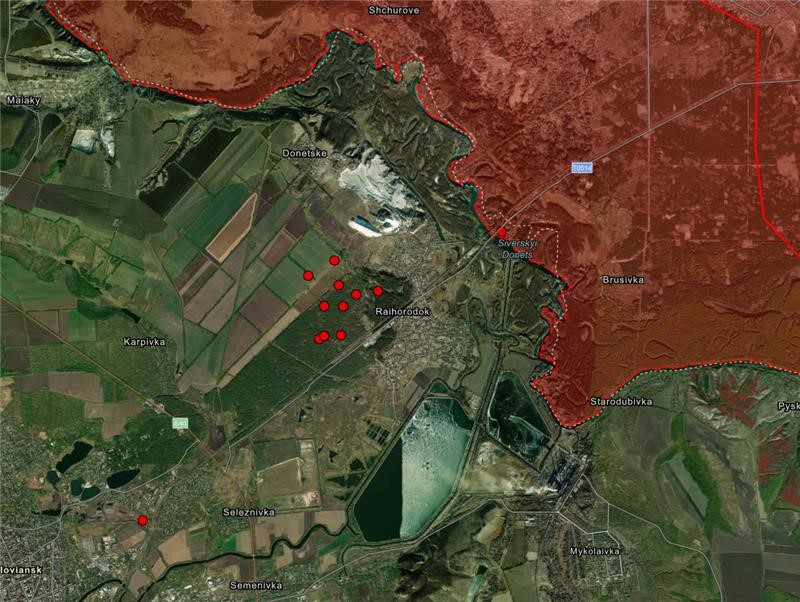 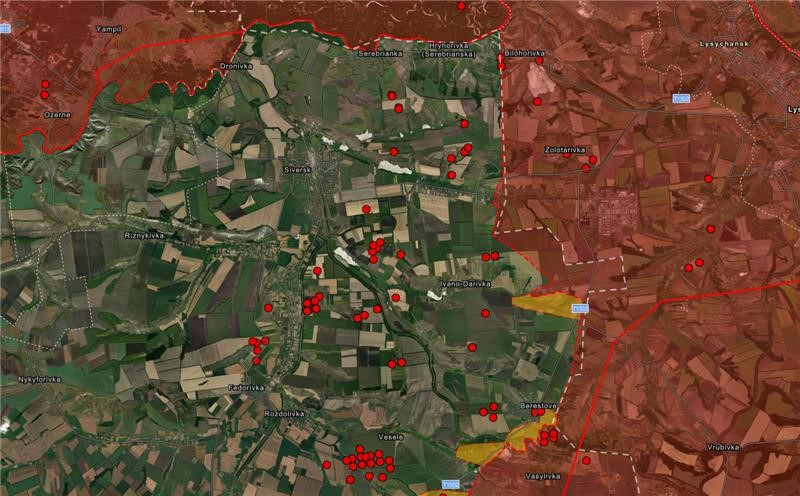 Russian forces continued ground attacks south of Bakhmut on July 6. The Ukrainian General Staff stated that Ukrainian troops repelled attempted Russian advances in the direction of Myronivka-Luhanske, Holmivskyi-Novoluhanske, and Vershyna, all south of Bakhmut and near the critical E40 or T0513 highways that run north into Bakhmut.[14] Residents of Bakhmut observed direct Russian artillery strikes on the city, indicating that Russian forces are continuing to set conditions to launch an assault on the city itself.[15]

Russian forces in the Donetsk City area continued to fire on Ukrainian positions along the Avdiivka-Donetsk City line of contact but did not make any confirmed advances on July 6.[16] 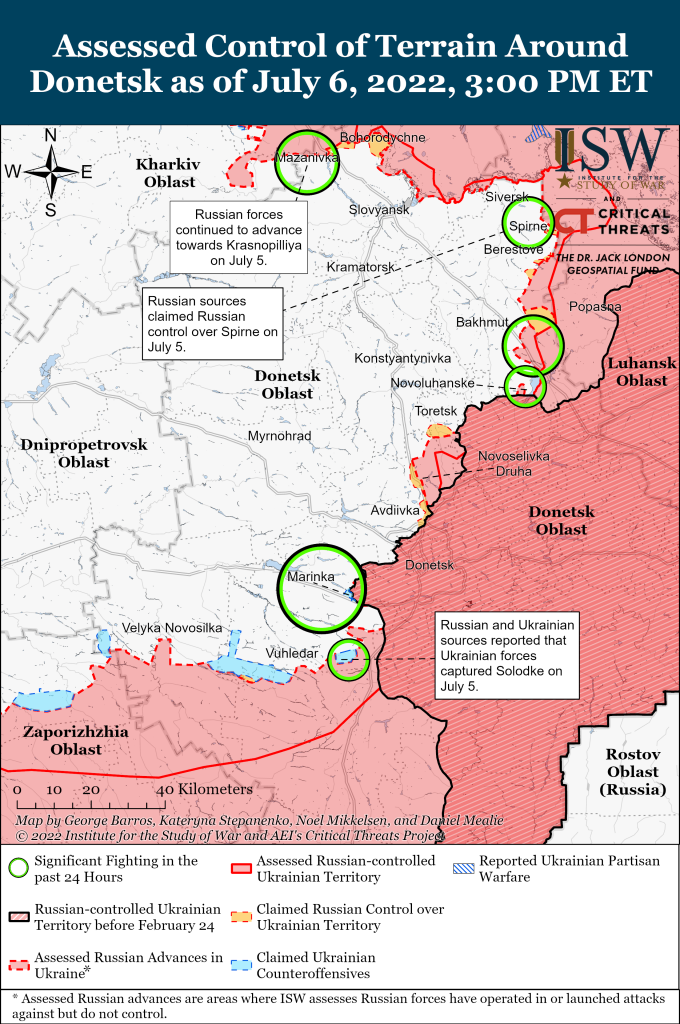 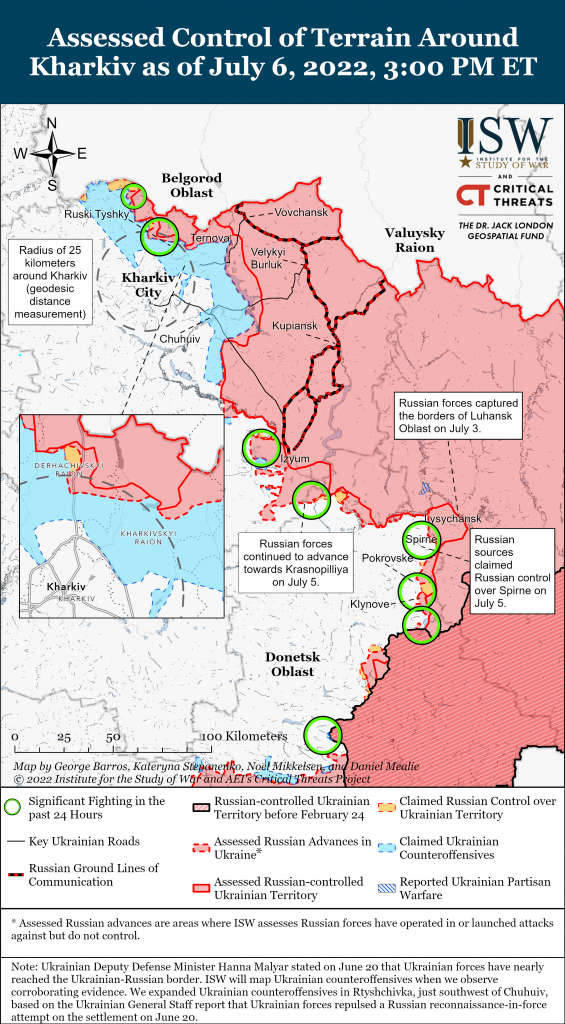 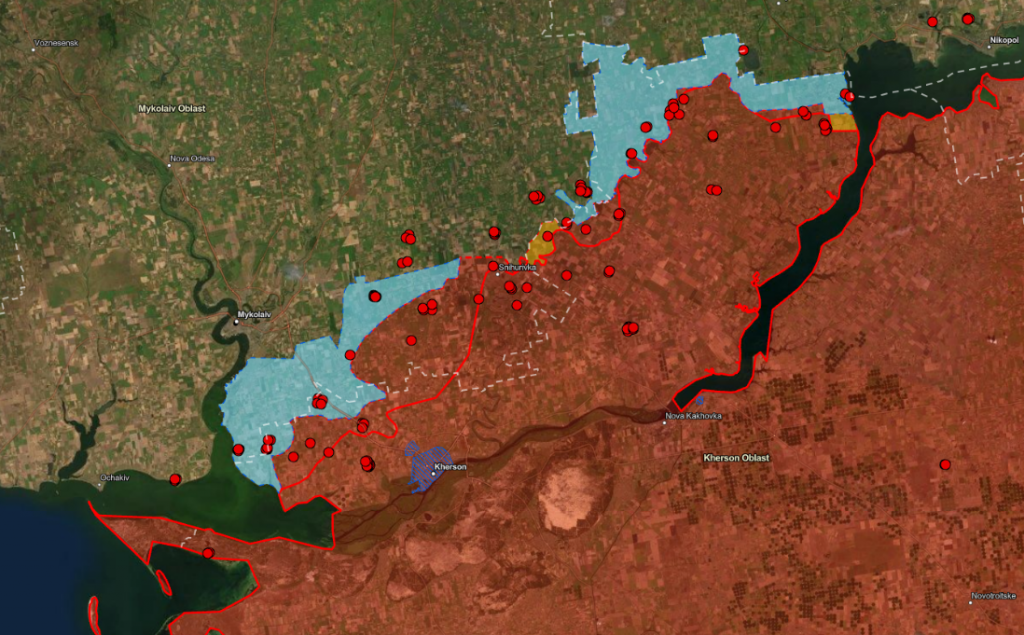 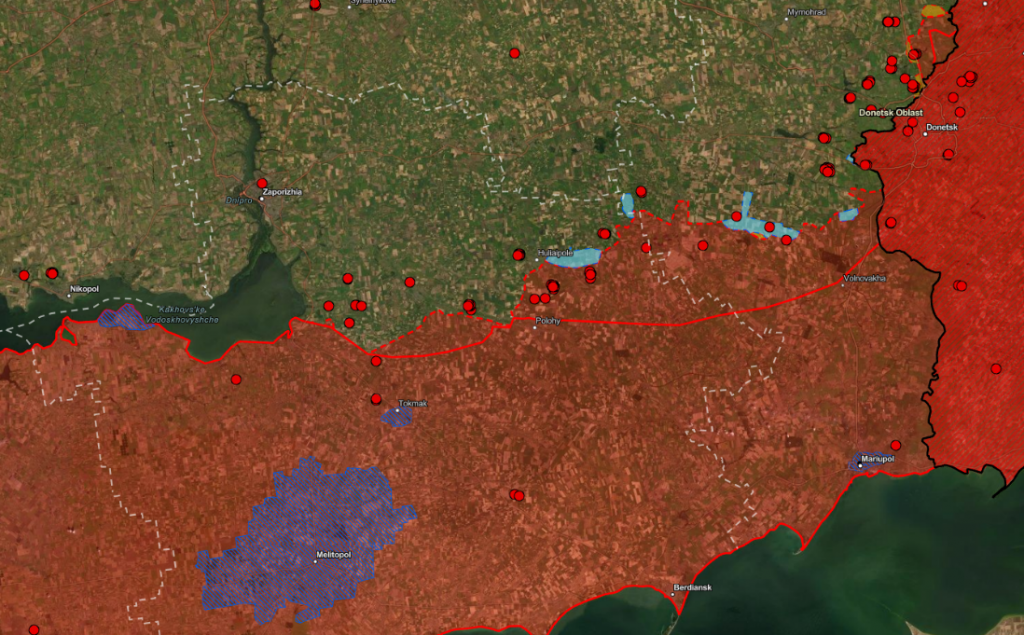 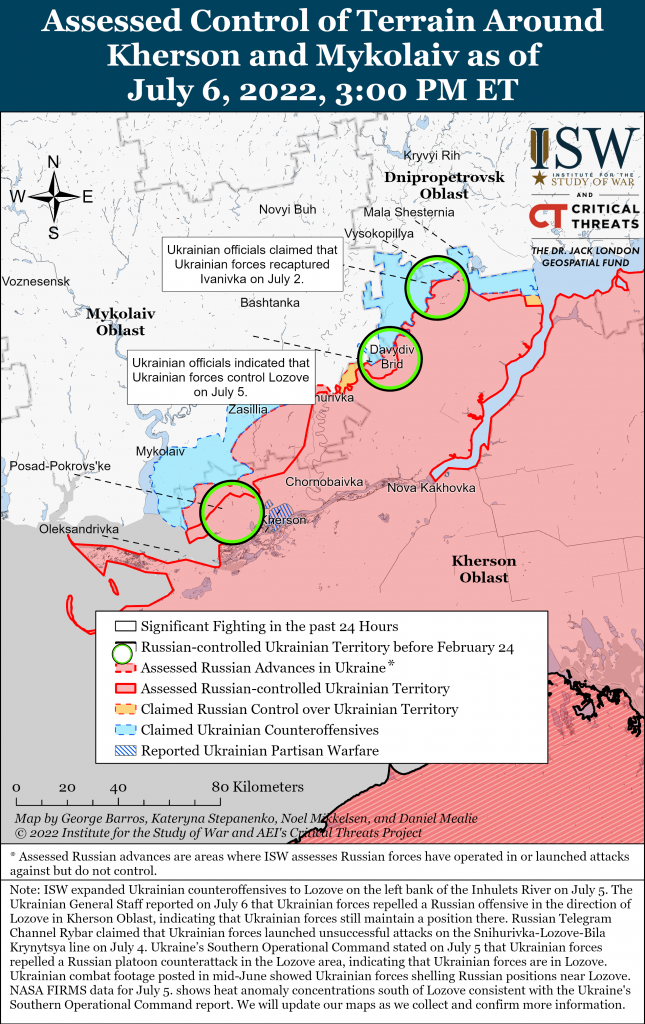 Russian forces began accumulating military equipment at the 1st Guards Tank Army training ground in Mulino, Nizhny Novgorod Oblast, likely to support the formation of a new military unit. Ukraine’s Conflict Intelligence Team (CIT) observed Russian military vehicles (presumably taken out of storage) heading towards Mulino over the past few weeks.[28] CIT added that an unnamed Russian military source claimed that Russian military commanders are forming a 3rd Army Corps in Mulino, but it is unclear if the Russians are creating a 3rd Corps within the Russian Ground Forces proper or integrating the new unit with existing LNR and DNR 1st and 2nd Army Corps or some other organization.[29] The Russian Ground Forces command structure does not currently have a regular corps echelon--it retains isolated corps associated with some fleets and in Kaliningrad.  CIT noted that such evidence supports former Kyiv Oblast Administration Head Oleksandr Pavlyuk’s reports that Russian forces are forming a 15,500-person-strong 3rd Army Corps within the Western Military District (WMD).[30] ISW cannot independently verify CIT or Pavlyuk’s statements, but Russian Defense Minister Sergey Shoigu had previously announced plans to create 12 new WMD units of unspecified echelon on May 20.[31]

Russian forces continue to face personnel generation and covert mobilization challenges. Director of Rochan Consulting Konrad Muzyka cited Finnish outlet Yle, which noted that the Russian army has sent at least one battalion tactical group (BTG) from the 80th Arctic Motorized Rifle Brigade (previously stationed close to the Finnish border in Alakurtti) to support the invasion of Ukraine.[32] The satellite imagery showed that Russian forces have withdrawn 100 military vehicles in May from Alakurtti and roughly 700 servicemen left the base in mid-May.[33] The 80th Arctic Motorized Rifle Brigade was reportedly the last northern brigade to enter the Russian war in Ukraine.[34] Pro-Kremlin media outlets announced the deployment of a new volunteer battalion from the Republic of Bashkortostan (north of Kazakhstan) to Donbas on July 6.[35] The Russian organization “Veterans of the Marine Corps and Special Forces of the Navy” announced the creation of the battalion at the end of May and noted that servicemen received a month of training before deployment.[36] A month is likely not enough time to sufficiently prepare the battalion for frontline hostilities in Donbas. The Republic of Bashkortostan and the Russian Defense Ministry financially incentivized servicemen by offering 200,000 rubles for signing the military contract and 2,000 rubles for every day served.[37] Russian outlet Baza also reported that three unknown assailants conducted an unspecified attack on the 488th Motorized Rifle Regiment of the 20th Combined Arms Army military unit in Klintsy, Bryansk Oblast, likely in protest of Russian covert mobilization practices.[38]