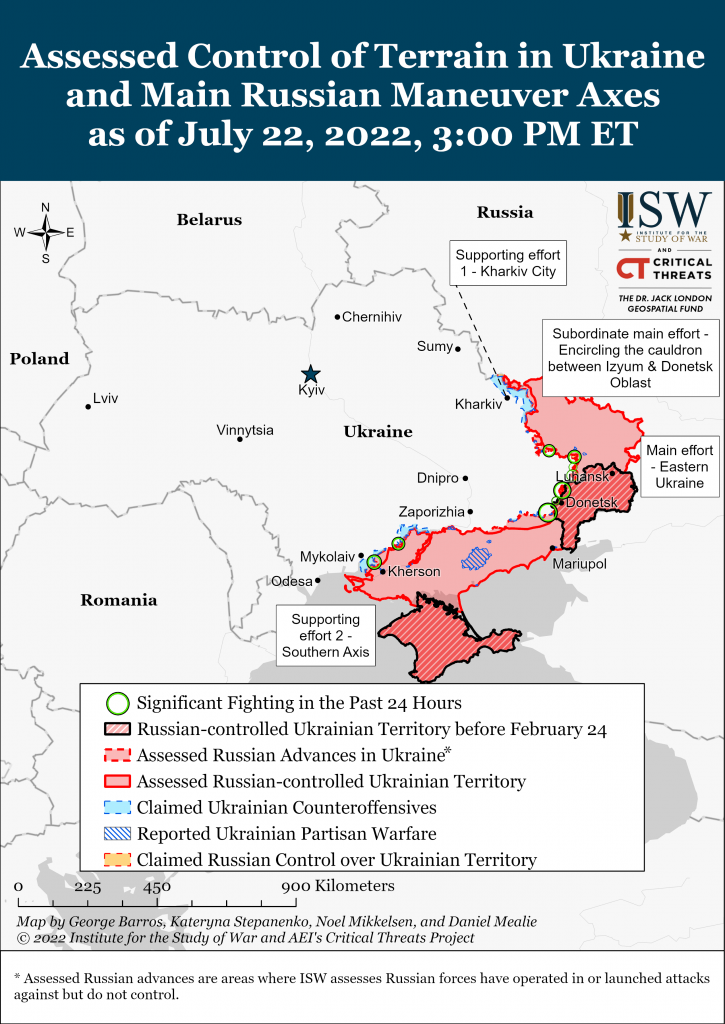 Russian forces did not conduct any confirmed ground attacks toward Slovyansk and shelled settlements to the southeast and southwest of Izyum on July 22. The Ukrainian General Staff reported that Russian forces shelled Dolyna, Dibrovne, Bohorodychne, Adamivka, Mykilske, Kurulka, Mazanivka, and Krestychne, all to the northwest of Slovyansk, and conducted aerial reconnaissance north of Barvinkove in Velyka Komyshuvakha.[6]

Russian forces conducted ground attacks toward Bakhmut from positions to the east and continued limited ground assaults south of Bakhmut on July 22. Russian sources claimed that troops of the Wagner Private Military Company (PMC) occupied the southern part of Pokrovske, less than 5 km east of Bakhmut.[9] The Ukrainian General Staff reported that Russian troops are also attempting to advance towards Bakhmut from the Stryapivka-Soledar area to the northeast and the territory of the Vuhledar Power Plant to the south.[10] Russian forces continued artillery strikes directly on Bakhmut and surrounding settlements to support ongoing ground offensives.[11] 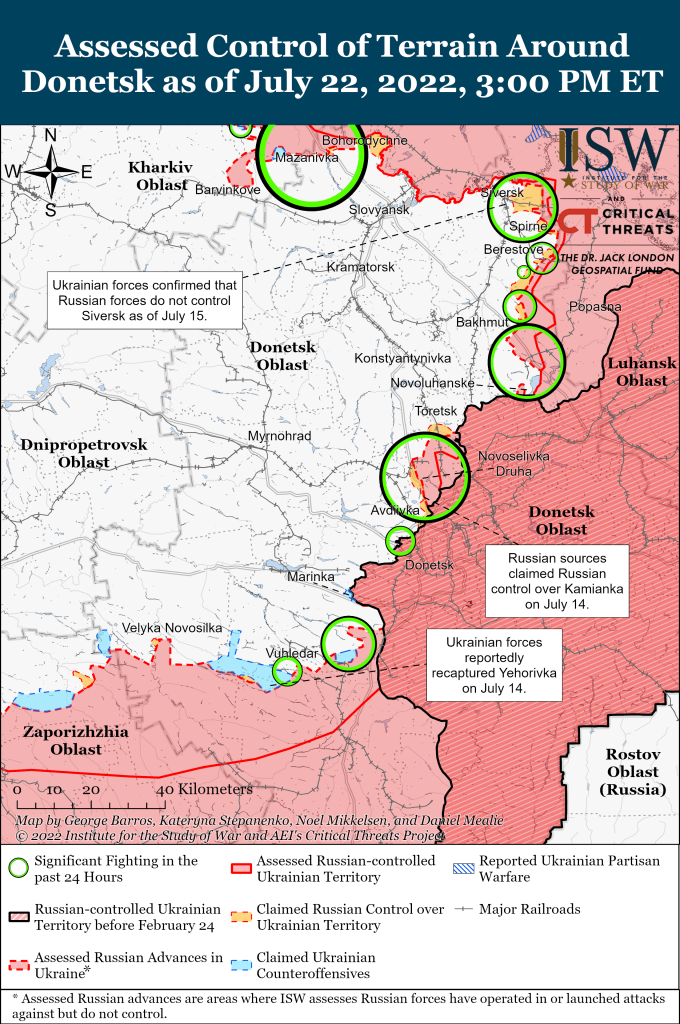 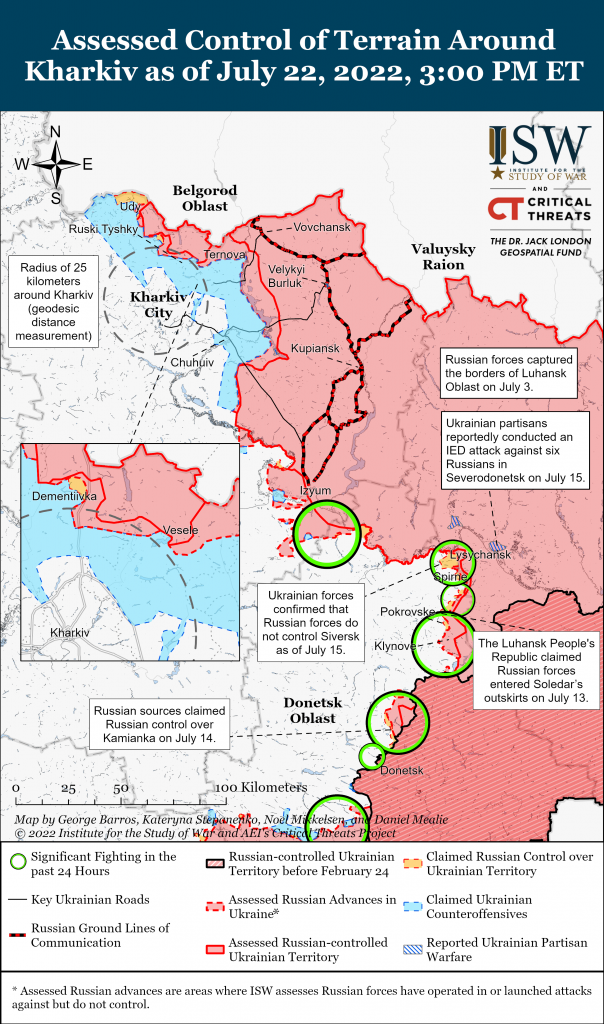 Russian forces conducted limited unsuccessful offensives in Kherson Oblast on July 22. The Ukrainian General Staff reported that Russian forces unsuccessfully attempted to advance in the Mala Seidemynukha-Andriivka and Davydiv Brid-Bilohirka directions, both near the Kherson-Mykolaiv Oblast border.[18] Russian Telegram Channel Rybar confirmed that Ukrainian forces still maintain a bridgehead on the Inhulets River near Lozove on July 22.[19] Russian forces continued focusing on defending previously occupied positions and preventing Ukrainian offensive actions along the Southern Axis and continued conducting artillery strikes on settlements along the Kherson-Mykolaiv and Kherson-Dnipropetrovsk Oblast borders and settlements on the Zaporizhia Oblast frontline.[20] Russian forces launched missile strikes on civilian infrastructure in Mykolaiv City and Apostolove in Dnipropetrovsk Oblast and airstrikes near Potomkyne and Prechystivka.[21] Ukraine’s Southern Operational Command reported on July 22 that Russian forces are mining roads and the banks of the Inhulets River in the areas bordering Snihurivka and Zelenodolsk, suggesting that Russian forces may be preparing for a possible Ukrainian counteroffensive in the area.[22]

Ukrainian forces are continuing to threaten Russian logistics strongholds along the Southern Axis. Ukraine's Southern Operational Command reported that Ukrainian forces destroyed five Russian strongholds and two Russian ammunition depots in the Zelendolsk and Skadovsk areas of Kherson Oblast on July 22.[23] However, ISW cannot confirm rumors about a Ukrainian encirclement of Russian forces near Vysokopillya as of this publication.[24] 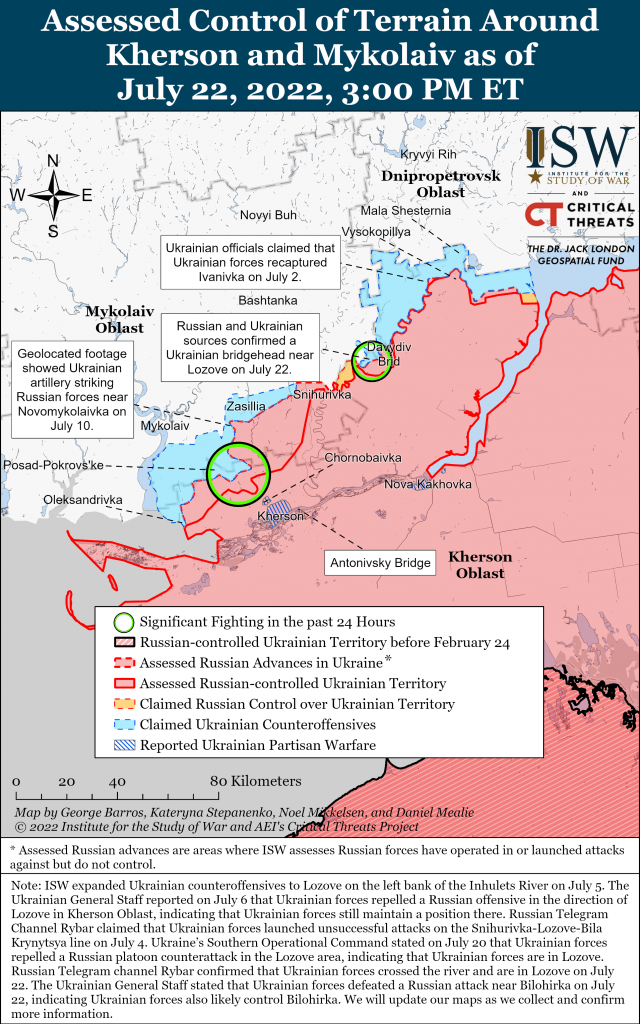 Russian leaders may be de-emphasizing the rapid deployment of ad hoc proxy units to Ukraine. Head of the Chechen Republic Ramzan Kadyrov announced on July 22 that personnel of the Chechen “West-Akhmat” Battalion (the formation of which was announced on June 26) will remain in Chechnya to further develop their skills and defend Chechen land if necessary.[29] Kadyrov had previously stated that this battalion was formed with maximum urgency for deployment into Ukraine, which is consistent with ISW’s observations that the Kremlin likely seeks to deploy non-Russian ethnic minority groupings to support operations in Ukraine in the short term.[30] However, Kadyrov now appears to be de-emphasizing the exigency of deployment, which may indicate that he is facing increasing domestic pressure to stop sending Chechens to fight in Russian operations in Ukraine.[31] Russian and Russian-backed proxy authorities may experience increasing internal pressure to scale down deployments of ad hoc battalions in minority enclaves.[32]

Donetsk People’s Republic (DNR) Head Denis Pushilin and Russian-backed Kharkiv occupation government head Vitaly Ganchev signed an agreement on July 22 to facilitate the cultural, political, and economic integration of occupied Kharkiv Oblast with Russia.[33] Pushilin claimed that the Russian “liberation” of Kharkiv Oblast, which Pushilin called “southern Russia,” has just begun.[34] Pushilin claimed that Russian cities in Kharkiv Oblast are waiting to return to their “Great Motherland” and that the “Russian city of Kharkiv, which has always been a gubernatorial city of the Russian empire...will also return home [to Russia].”[35] This agreement supports ISW’s assessment that the Kremlin intends to annex Kharkiv Oblast into the Russian Federation.  Russian forces may intensify efforts to gain ground in Kharkiv although the likelihood of Russian forces capturing significant territory in Kharkiv Oblast remains limited.