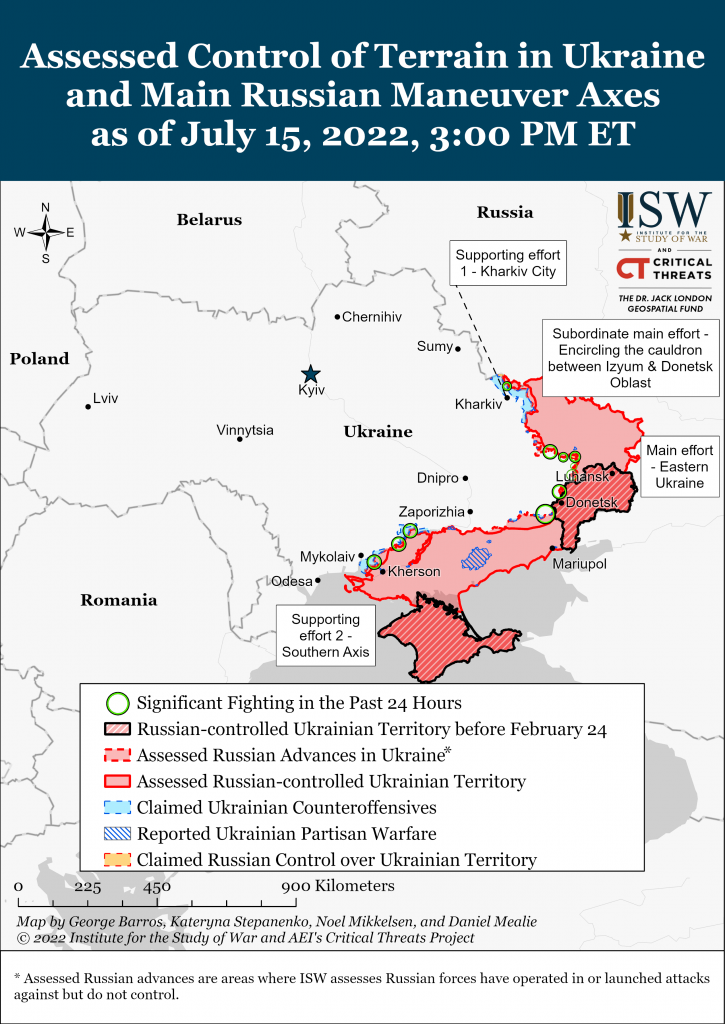 Russian forces continued to launch localized attacks and continued shelling north of Slovyansk on July 15. The Ukrainian General Staff reported that Ukrainian forces have repelled a Russian assault on Bohorodychne, approximately 20 km northwest of Slovyansk.[4] Geolocated footage shows Ukrainian artillery striking a Russian armored mobility vehicle in Bohorodychne on an unspecified date, which may indicate that Russian forces are attempting to advance through the settlement.[5] Russian forces continued to shell Slovyansk and settlements southwest and southeast of Izyum.[6] The Ukrainian Main Military Intelligence Directorate (GUR) released footage of the aftermath of Russian shelling at the Sviatohirsk Lavra (a monastery approximately 19 km northeast of Slovyansk), which indicates that Russian forces have not crossed the Siverskyi Donets River in the area.[7] 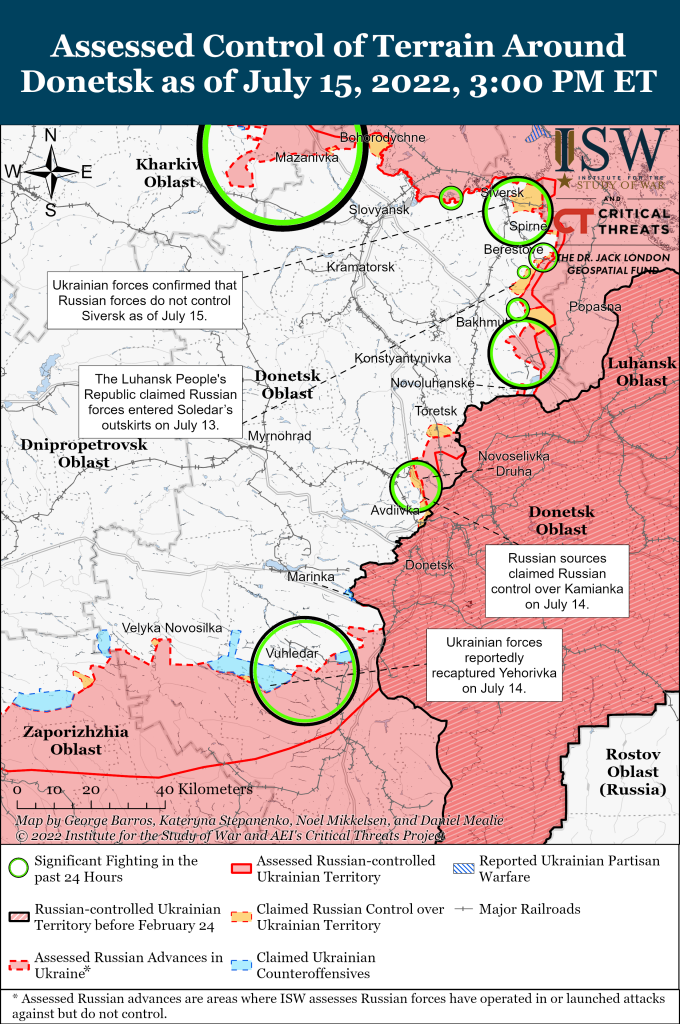 Russian forces continued offensive operations northeast of Bakhmut, likely in an attempt to seize the T1302 Bakhmut-Lysychansk highway.[11] The Ukrainian General Staff reported that Russian forces unsuccessfully attacked Nahirne and Bilohorivka along the T1302.[12] Geolocated footage showed Ukrainian artillery shelling a Russian ammunition depot in Nahirne, which indicates that Russian forces have likely advanced within the settlement but did not secure access to the T1302.[13] The Luhansk People’s Republic claimed that Russian forces seized Nova Kamyanka and Stryapivka, along the T1302, but did not provide any evidence to support the claim.[14] Ukrainian forces also reportedly repelled assaults on the Vuhlehisrka Power Plant, Vershyna, and Kodema, just southeast of Bakhmut.[15] 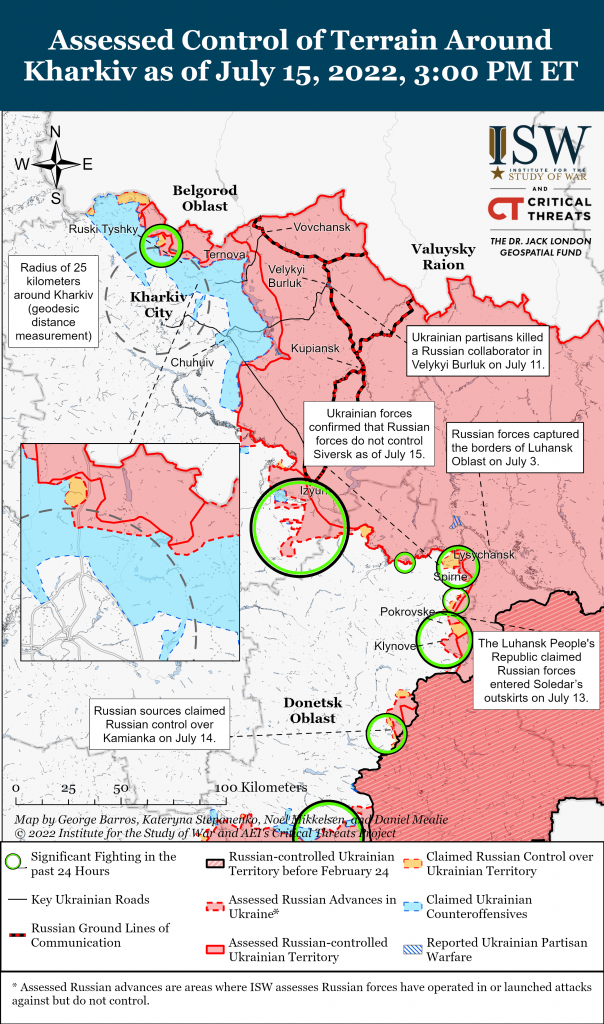 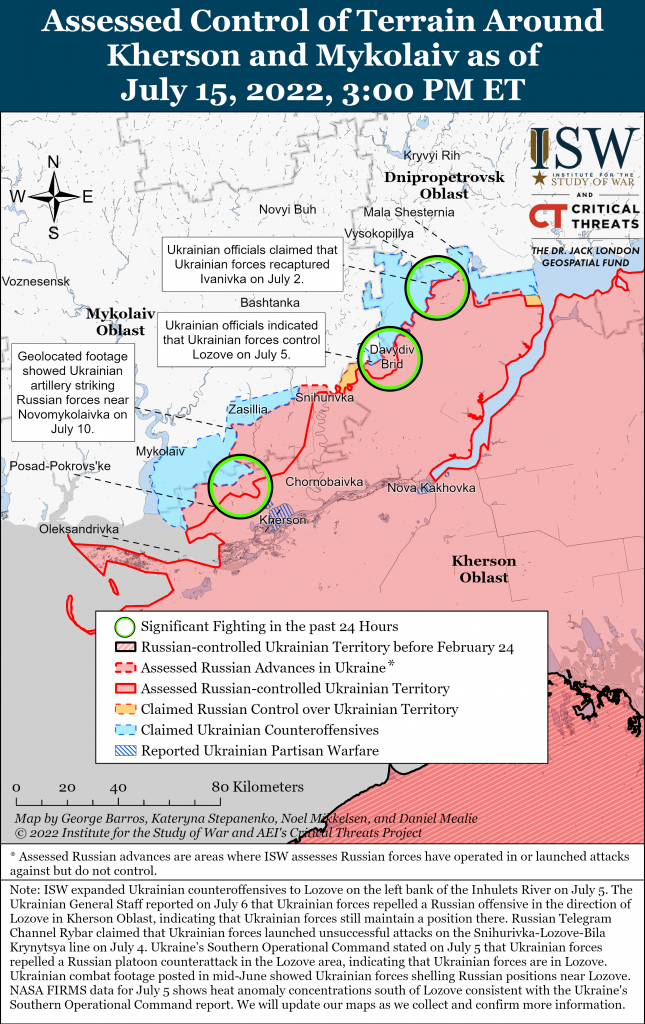 Russian forces continue conducting accelerated training for combat volunteers. Chechen Republic Head Ramzan Kadyrov claimed on July 15 that hundreds of volunteers are arriving daily in Grozny, Chechnya, for an accelerated training course before deploying to unspecified areas of Donbas.[27] Kadyrov claimed that volunteers receive unspecified state guarantees and train at the Russian Special Forces University east of Grozny in Gudermes, likely to entice prospective volunteers with promises of comfortable compensation and living conditions.[28] The governor of Russia’s Chelyabinsk Oblast announced on July 13 that the region is forming the “South Ural” and “South Uralets” volunteer battalions.[29] An 81-person detachment of Russian military volunteers of the 263-person South Uralets Battalion reportedly left Chelyabinsk on July 15 for an accelerated training course in Nizhny Novgorod, Russia.[30]

Advisor to the Head of Luhansk People’s Republic (LNR) Marina Filippova announced on July 15 that the LNR government established an organizational headquarters to support and hold a referendum on an unspecified date to join the Russian Federation.[34] The LNR will likely hold the referendum alongside those of other Russian occupation and proxy governments in Ukraine.