The Kremlin likely ordered Russian “federal subjects” (regions) to form volunteer battalions to participate in the Russian invasion of Ukraine, instead of declaring partial or full mobilization in Russia. Russian war correspondent and milblogger Maksim Fomin stated that Russia has begun a “volunteer mobilization,” where every region must generate at least one volunteer battalion.[1] The term “volunteer mobilization” likely implies that the Kremlin ordered the 85 “federal subjects” (regions, including occupied Sevastopol and Crimea) to recruit and financially incentivize volunteers to form new battalions, rather than referring to literal mobilization relying on conscription or the compulsory activation of all reservists in Russia. Russian outlets reported that regional officials recruit men up to 50 years old (or 60 for separate military specialties) for six-month contracts and offer salaries averaging 220,000 to 350,000 rubles per month (approximately $3,750 to $6,000).[2] Separate regions offer an immediate enlistment bonus that averages 200,000 rubles (approximately $3,400) issued from the region‘s budget and social benefits for the servicemen and their families.[3] Russian media has already confirmed the creation or deployment of volunteer battalions in Kursk, Primorskyi Krai, Republic of Bashkortostan, Chuvashia Republic, Chechnya, Republic of Tatarstan, Moscow City, Perm, Nizhny Novgorod, and Orenburg Oblasts in late June and early July.[4] Tyumen Oblast officials announced the formation of volunteer units (not specifically a battalion) on July 7.[5]

Volunteer battalions could generate around 34,000 new servicemen by the end of August if each federal subject produces at least one military unit of 400 men. Some Russian reports and documentation suggest that the Kremlin seeks to recruit an estimated 400 soldiers per battalion, who will receive a month of training before deploying to Ukraine.[6] The number of men may vary as some federal subjects such as Republic of Tatarstan and Chechnya are establishing two and four volunteer battalions, respectively.[7] It is possible that some federal subjects may delay or not participate in the establishment of the battalions, with officials in Volgograd reportedly remaining silent on the formation of the new units.[8] Newly formed battalions are currently departing to training grounds and will likely complete their month-long training by end of August but they will not be combat ready in such a short time period.[9]

Russian milbloggers criticized the Russian military on July 12 for sourcing Iranian UAVs to improve artillery targeting in Ukraine while failing to address the command issues that more severely limit the effectiveness of Russian artillery. Russian Telegram channel Rybar claimed on July 12 that Russian requests and approval for artillery fire pass through a convoluted chain of command, resulting in a delay of several hours to several days between Russian ground forces requesting artillery fire, Russian targeting, and conducting the actual strikes.[10] Rybar claimed that Russian forces in Syria reduced the time between targeting and striking to under an hour.[11] Rybar claimed that while the Russian need for more UAVs is clear and that Iranian UAVs helped achieve a target-to-fire time of 40 minutes in Syrian training grounds additional UAVs do not solve the problems of overcentralized Russian command and overreliance on artillery in Ukraine.[12] Russian milblogger Voyennyi Osvedomitel’ claimed that Russian forces had faced the same overcentralized command during the First Chechen War, wherein the inability of Russian ground forces to request artillery support without going through a chain of command inhibited responses to enemy offensive actions.[13] Milblogger Yuzhnyi Veter claimed that Ukrainian artillery forces’ target-to-response time is under 40 seconds.[14]

The Critical Threats Project at AEI has updated its datasheet on Iranian UAVs with additional information, including information on the kinds of munitions those UAVs can reportedly launch. 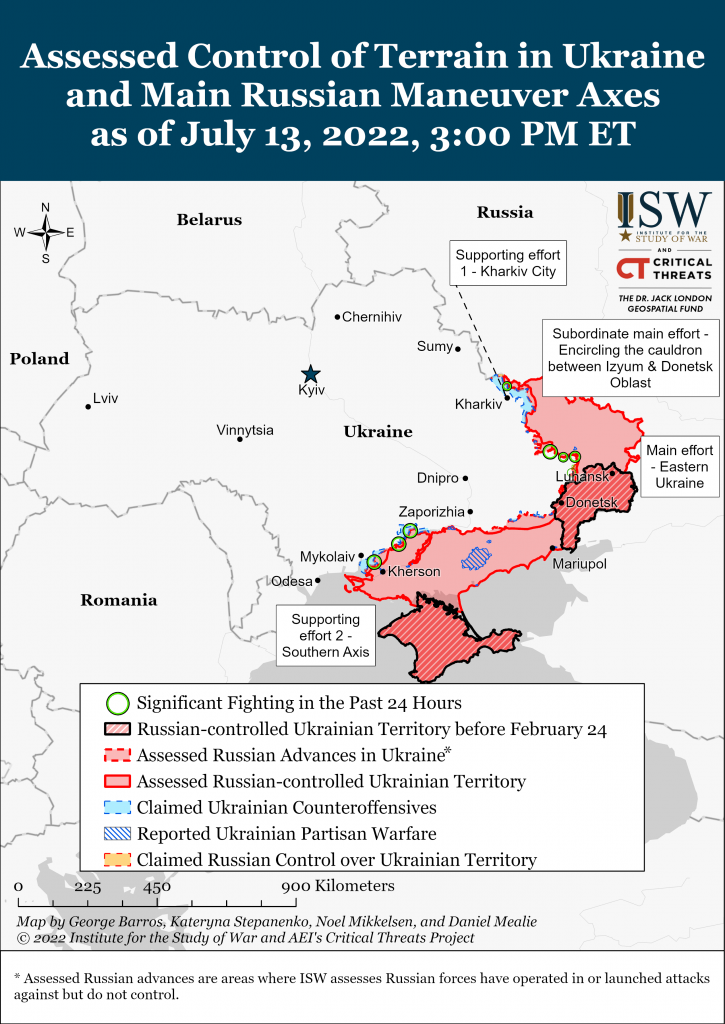 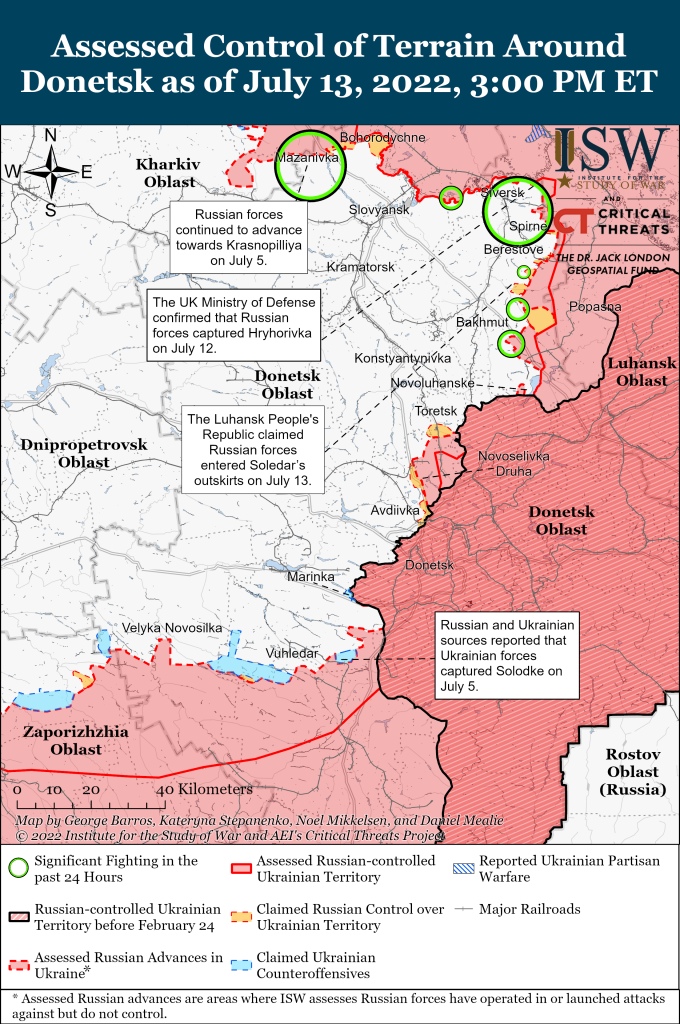 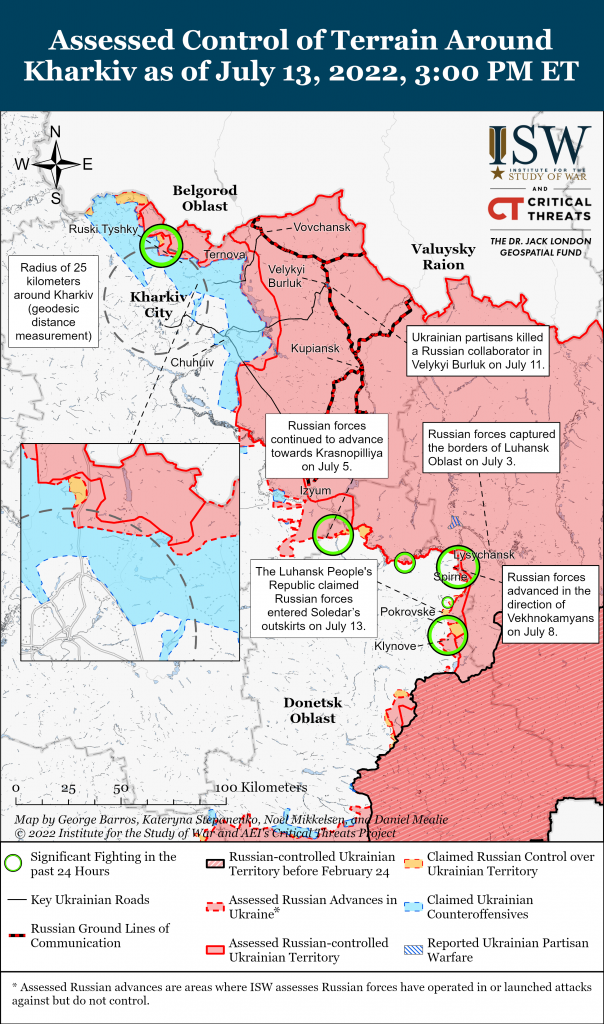 Russian forces continued to conduct limited and unsuccessful ground assaults northwest of Kharkiv City on July 13. The Ukrainian General Staff reported that Ukrainian forces repelled another Russian attack on Dementiivka and noted that units of the Western and Eastern Military Districts continue to maintain defensive positions on the Kharkiv City axis.[30] The Russian Defense Ministry claimed that Russian forces neutralized a Ukrainian sabotage and reconnaissance group in the area of Dementiivka, but ISW cannot independently verify if Russian forces recaptured territory in Dementiivka’s vicinity.[31] The Ukrainian General Staff also stated that Russian helicopters launched airstrikes on Petrivka and Verkhniy Saltiv, both northeast of Kharkiv City.[32] Russian forces continued to shell Kharkiv City and settlements northeast, northwest, and southeast of the city.[33] 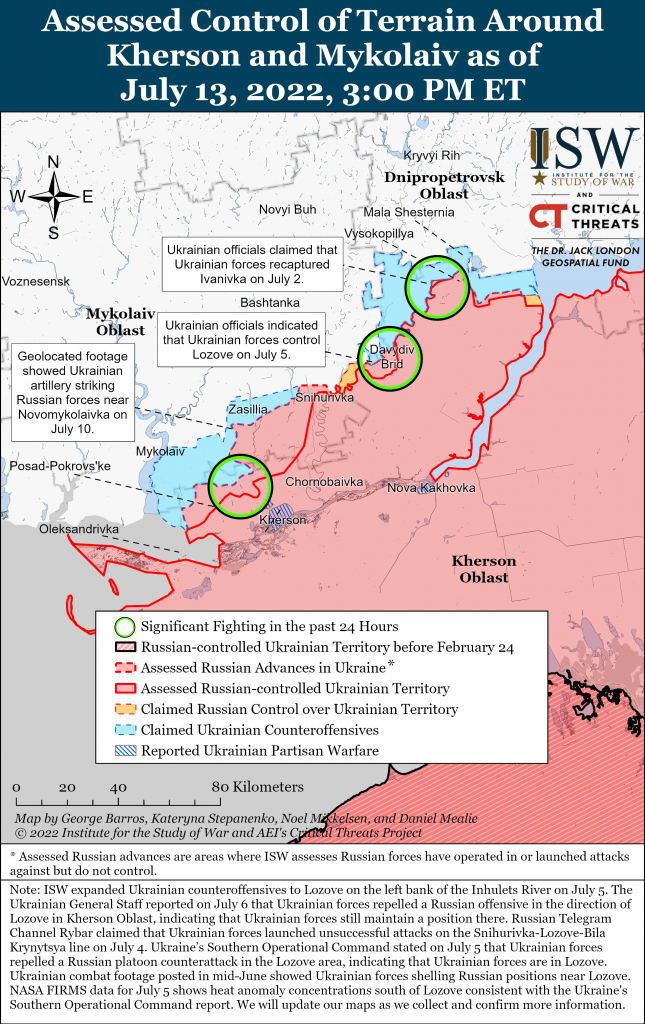 Russian forces continued to undertake defensive operations across the Southern Axis amidst Ukrainian strikes on Russian ammunition depots. The Kherson Oblast Administration reported that local residents observed Russian forces fortifying the Antoniv Bridge over the Dnipro River, just east of Kherson City, which may indicate Russian preparations for Ukrainian counteroffensives all the way to Kherson City.[34] Russian forces will likely attempt to defend the bridge to preserve their access to the western bank of the Dnipro River. Geolocated footage showed that Russian forces deployed Tochka-U tactical ballistic missile systems to Melitopol, reportedly in response to the increase of Ukrainian strikes on occupied territories.[35]

Russian forces continued to shell Ukrainian positions along the Kherson-Mykolaiv and Kherson-Dnipropetrovsk Oblast borders and settlements on the Zaporizhia Oblast frontline.[38] Russian forces reportedly launched missile strikes onto an industrial facility in Zaporizhia City, a farm in Odesa Oblast, and social infrastructure in the Bereznhuvatskyi district in Mykolaiv Oblast.[39] Dnipropetrovsk Oblast Administration Head Dmytro Reznichenko also reported that Russian MLRS struck Nikopol, Chervonohryhorivka, and Myrove, all situated on the northern side of the Kakhovske Reservoir.[40]

Russian forces continued to recruit and form additional regional volunteer battalions throughout Russia on July 13. Kazan regional news outlet Biznes Online reported that the Republic of Tatarstan established and dispatched the “Alga” volunteer battalion for a month-long training program before committing it to the “special military operation” in Ukraine.[41] The Republic of Tatarstan will deploy two volunteer battalions in total and pay servicemen 2,000 rubles (approximately $34) per day in addition to a one-time 260,000 ruble payment (approximately $4,450) for enlisting out of the republic’s budget.[42] The Russian Defense Ministry will reportedly pay servicemen a starting monthly salary of 170,000 rubles (approximately $2,900).[43] Biznes Online estimated that each battalion will have over 400 servicemen, and reported that 300 to 350 men already have already passed the selection process for the second volunteer battalion “Timer.”[44] Russian opposition outlet Meduza reported that Moscow officials began recruitment for the newly-established “Sobyanskiy Polk” regiment on July 1 and are offering over 200,000 rubles per month (approximately $3,400) to volunteers out of the Moscow City budget.[45] Meduza noted that men from regions other than Moscow City predominantly registered for the “Sobyanskiy Polk” as of July 13. Meduza stated that former commander of the Donetsk People’s Republic (DNR) Militia Roman Vysotsky is one of the recruiters for “Sobyanskiy Polk,” but it is unclear if the regiment will merge with DNR forces. Ukraine’s Conflict Intelligence Team (CIT) obtained a document stating that Krasnoyarsk Krai allocated 120 million rubles (approximately two million dollars) to recruit 400 servicemen from the region.[46]

Russian forces continue to face desertion and morale problems. The Ukrainian Zaporizhia Oblast Military Administration reported that about 60 Russian servicemen deserted due to fear of Ukrainian artillery strikes on Zaporizhia Oblast and noted that the Russian Federal Security Service (FSB) is searching for deserters in occupied settlements in the region.[47] Russian outlet Baza reported that an unknown man threw two Molotov Cocktails at a military recruitment center in Mozhaysk, Moscow Oblast on July 13.[48]