Russian forces are in the midst of a theater-wide operational pause in Ukraine. This operational pause has been largely characterized by Russian troops regrouping to rest, refit, and reconstitute; heavy artillery fire in critical areas to set conditions for future ground advances; and limited probing attacks to identify Ukrainian weakness and structure appropriate tactical responses. As ISW has previously noted, an operational pause does not mean a complete cessation of hostilities, rather that ongoing hostilities are more preparative in nature.[1]

Rybar stated that the Russian Defense Ministry and possibly actors within the presidential administration are actively attempting to silence unofficial coverage of the Russian war in Ukraine. Rybar expressed support for a Telegram article by Donetsk People’s Republic (DNR) Deputy Information Minister (and milblogger) Daniil Bezsonov that criticized the Kremlin's apparent effort to promote self-censorship among war correspondents.[3] Rybar noted that Adviser to the Russian Defense Minister Andrey Ilnitsky called for such self-censorship on May 26 and had encouraged Russian war correspondents to report on the war only from an ideological standpoint without getting into operational details.[4] Rybar speculated that the presidential administration or other Russian officials ordered Ilnitsky to promote censorship among war correspondents who publish frontline updates in real-time.[5]

Rybar noted that the relationship between the Russian military command and war correspondents particularly soured after Russian President Vladimir Putin met with war correspondents during the St. Petersburg Economic Forum on June 17. Rybar claimed that two prominent war correspondents told Putin about the “mess” at the frontlines during the closed-door meeting, effectively bypassing the Russian Defense Ministry in presenting their negative views directly to the commander in chief. The event Rybar is describing likely occurred: Kremlin Spokesperson Dmitry Peskov announced on June 12 that Putin would hold a largely closed-door meeting with Russian war correspondents, and Russian propagandist Margarita Simonyan confirmed that Putin had a “candid” and long conversation with frontline journalists after the event.[6] Rybar noted that Russian Defense Ministry began to identify war correspondents as a “threat” after this engagement whereas previously it had perceived them as a “poorly controlled problem.”

Putin likely held the June 17 meeting to defuse milblogger discontent, which had become evident and dramatic after the disastrous failed river crossing attempt at Bilohorivka in mid-May. If that was his aim, he failed to win them over, as the milbloggers have remained staunchly critical of the way the Russian high command is waging the war ever since. But Putin may also have obtained a more unvarnished view of what is occurring on the frontlines than he was getting from the chain of command.

The Russian information space would change significantly if the Ministry of Defense cracked down on the milbloggers and stopped them from operational reporting. ISW uses milbloggers and Russian war correspondents as sources of Russian claims on a daily basis, so the elimination of regular milblogger operational reporting would affect ISW’s approach to coverage. We will continue to observe and report on milblogger and war correspondent behavior and will flag significant changes in the Russian information space as we observe them.

Russian milbloggers are increasingly criticizing Russian strategy and military leadership by seizing upon recent successful Ukrainian strikes against Russian rear areas.[7] Russian milblogger Voennyi Osvedomitel’ underlined the threat posed by Western-provided high mobility artillery rocket system (HIMARS) and stated that HIMARS will complicate Russian logistics in a Telegram post on July 9.[8] Voennyi Osvedomitel’ cautioned that Russian air defense may be increasingly insufficient against Ukrainian strikes and called on Russian forces to improve coordination between intelligence and aviation in order to identify and target Western-provided weapons systems. Another milblogger with a small following, Nam Pishut iz Yaniny, complained that Russian military leadership is proving unable to defend against Western weapons being used against Russian positions.[9] Igor Girkin, a Russian nationalist who previously commanded militants during operations in Donbas in 2014, discussed recent Ukrainian strikes against Russian rear areas and criticized Russian troops for not targeting Ukrainian ground lines of communication (GLOCs) along which HIMARS and other Western weapons are delivered.[10] Girkin suggested that the ongoing operational pause is exposing easily-exploitable Russian vulnerabilities and called for Russian troops to start fighting in full force again. Girkin and other milbloggers are likely to continue voicing their discontent with Russian military leadership as Ukrainian capabilities are strengthened by Western weaponry and equipment. 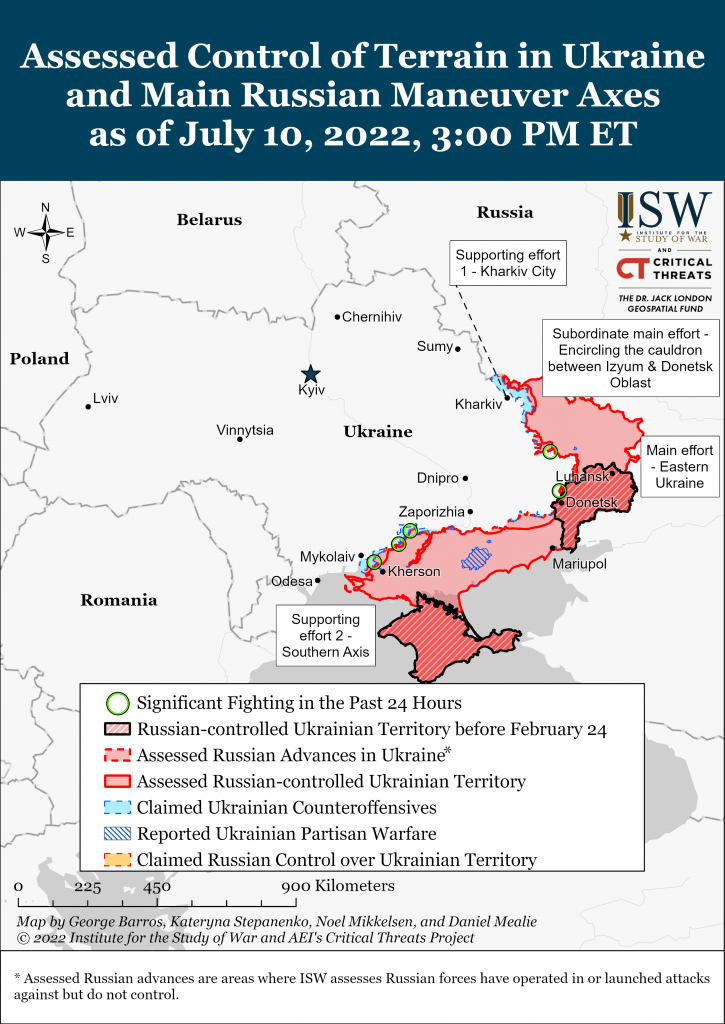 Russian forces continued to conduct artillery strikes near Siversk on July 10 but attempted no ground assaults in this area. The Ukrainian General Staff reported that Russian forces are concentrating troops in the Bilohorivka area, likely to consolidate control of the Luhansk Oblast border and prepare for westward advances.[14] Russian forces shelled Hryhorivka, Verkhmokamyanske, Serebryanka, Bilohorivka, Pereizne, Vyimka, and Ivano-Darivka in addition to Siversk.[15]

Russian forces intensified artillery and missile strikes west of Bakhmut but did not conduct any confirmed ground attacks near Bakhmut on July 10. Russian forces conducted a missile strike against a residential area of Chasiv Yar, 10 km directly west of Bakhmut along the T0504 highway.[16] Russian forces have previously shelled a railway station in Chasiv Yar on July 9, suggesting that they are targeting transportation infrastructure around Bakhmut.[17] The Ukrainian General Staff reported that Russian forces also shelled Kurdyumivka and Shumy, both within 25 km southwest of Bakhmut near critical roadways into the city.[18] Russian forces likely seek to isolate Bakhmut from Ukrainian lines of communication to the west and south, supporting their ongoing effort to interdict Ukrainian lines of communication along the Bakhmut portion of the E40 highway. 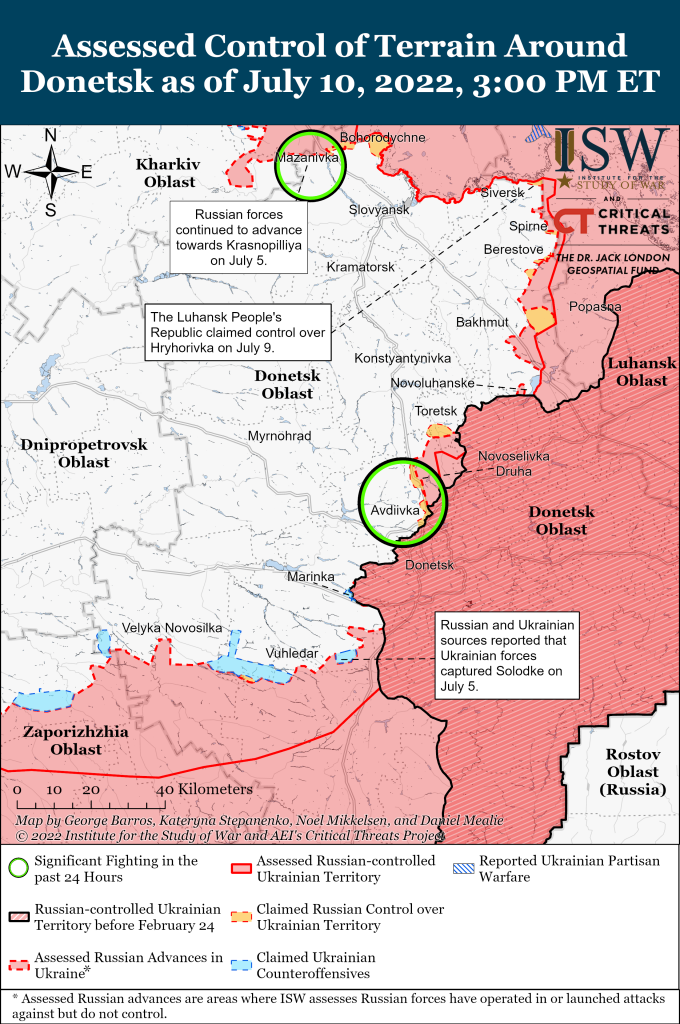 Russian forces did not conduct any ground assaults north of Kharkiv City on July 10, instead continuing air, artillery, and missile strikes on Kharkiv City and the surrounding settlements.[21] The Ukrainian General Staff reported that Russian forces continue to focus on restraining Ukrainian assaults on the front line.[22] 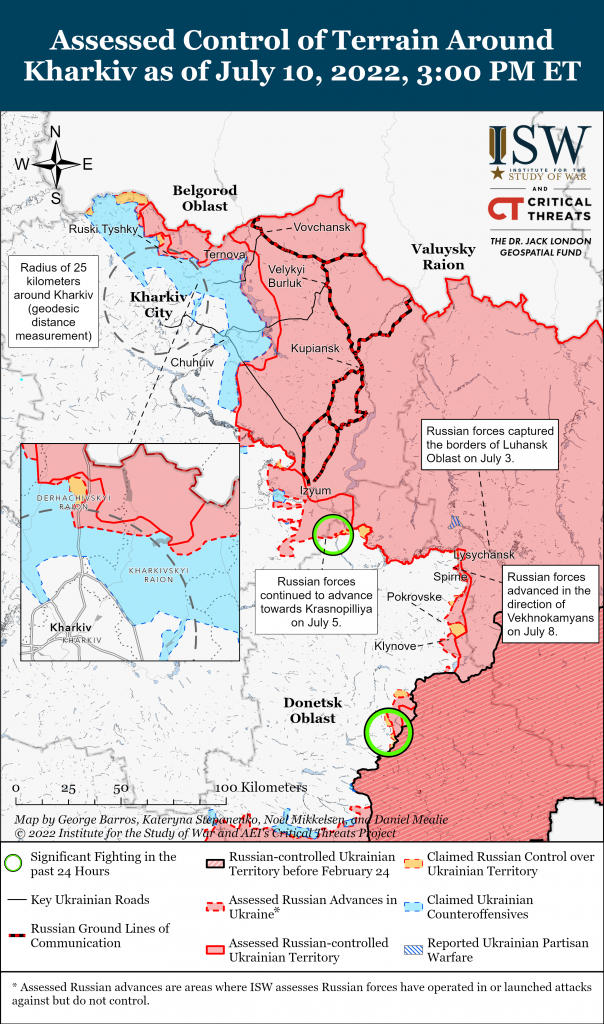 Russian forces conducted air, artillery, and missile strikes along the Southern Axis on July 10.[23] Russian forces shelled points in northwestern Kherson Oblast and eastern Mykolaiv Oblast and conducted a Ka-52 helicopter strike on Plotnytske, a small settlement in Kherson Oblast near Davydiv Brid.[24] Russian forces also hit the Kryvyi Rih region with Kalibr missiles.[25] Ukraine’s Southern Operational Command notably stated that Russian forces conducted a massive missile strike with S-300 anti-aircraft missiles on ground targets in Mykolaiv and Kherson Oblasts.[26] The use of anti-aircraft missiles in such a manner is inefficient, as such missiles carry small payloads and are optimized for destroying fragile aircraft in flight rather than ground targets. The reported Russian use of S-300 missiles in a ground attack role is also notable because of reports and indications that the Russians are having difficulty defending against Ukrainian manned air operations and missile strikes in the Southern Axis area. The decision to use S-300 missiles in this role in these circumstances may indicate that Russia is running out of surface-to-surface missiles or that it is running low on parts needed for the missiles’ air-to-air guidance or communications systems. 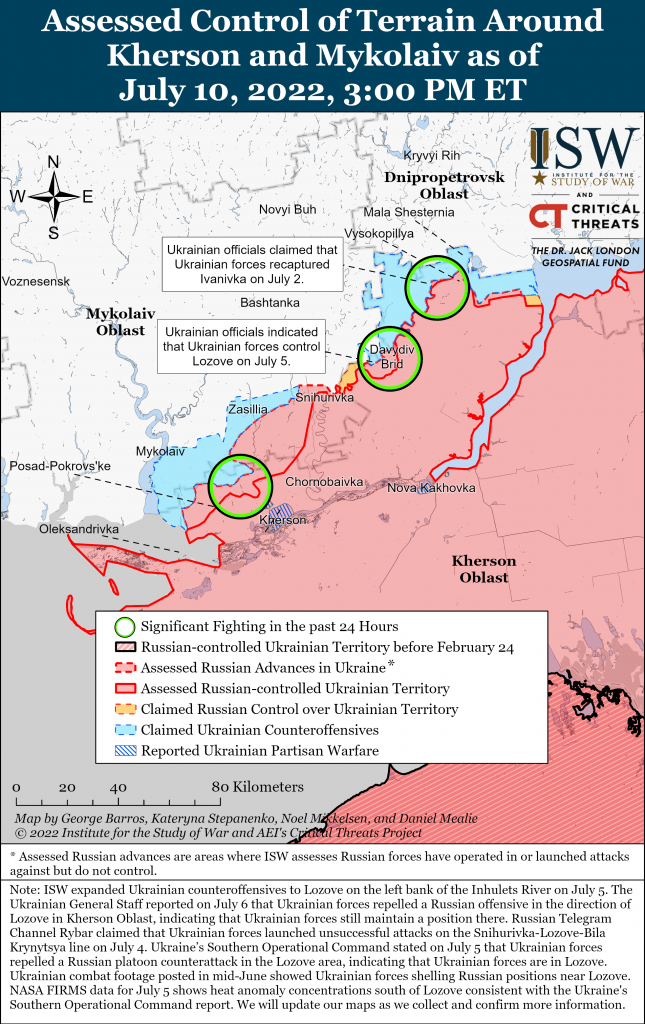 Russian military leadership continued to intensify recruitment measures to support force generation efforts on July 10. Ukraine’s Main Intelligence Directorate (GUR) reported that private military companies (PMCs) are escalating recruitment drives to compensate for personnel losses among conventional forces fighting in Ukraine.[27] The GUR noted that PMCs are actively recruiting prisoners due to a lack of other volunteers, which is consistent with previous reporting that the Wagner Group PMC has been recruiting prisoners from the IK-7 Yablonevka and IK-6 Obukhovo penal colonies in St. Petersburg.[28] The GUR claimed that PMCs are recruiting prisoners irrespective of the nature of their crimes in exchange for full amnesty after serving time on the frontline.

Governor of Russia’s Primorsky Krai, Oleg Kozhemkayo, announced on July 9 that Russia is forming the “Tigr” volunteer naval infantry battalion to participate in combat in Ukraine.[29] Kozhemkayo said that not all volunteers have prior combat experience and that they will undergo 30 days of training prior to deployment. Social media users noted that footage of the “Tigr” battalion shows that the recruits are older than traditional military age and are likely in their 50s to 60s.[30] ISW has previously reported that Russian military leadership will continue to constitute such ad hoc, oblast, and regionally-based volunteer units as losses among professional troops mount.[31]