Ukrainian officials confirmed that Russia is using Iranian-provided drones in Ukraine. Advisor to the Ukrainian President’s Office, Oleksiy Arestovych, stated on August 5 that Iran handed 46 drones over to Russia and that the Ukrainian government has already noted the use of these drones in combat in Ukraine.[1] At least a portion of the provided drones are older-generation “Shahed 129” heavy strike drones, which Russian forces may seek to use to attack US-provided HIMARS in Ukraine.[2] It is unclear whether the 46 drones represent all the drones that Tehran has agreed to send, or the number of Iranian drones that are currently operating in Ukraine. 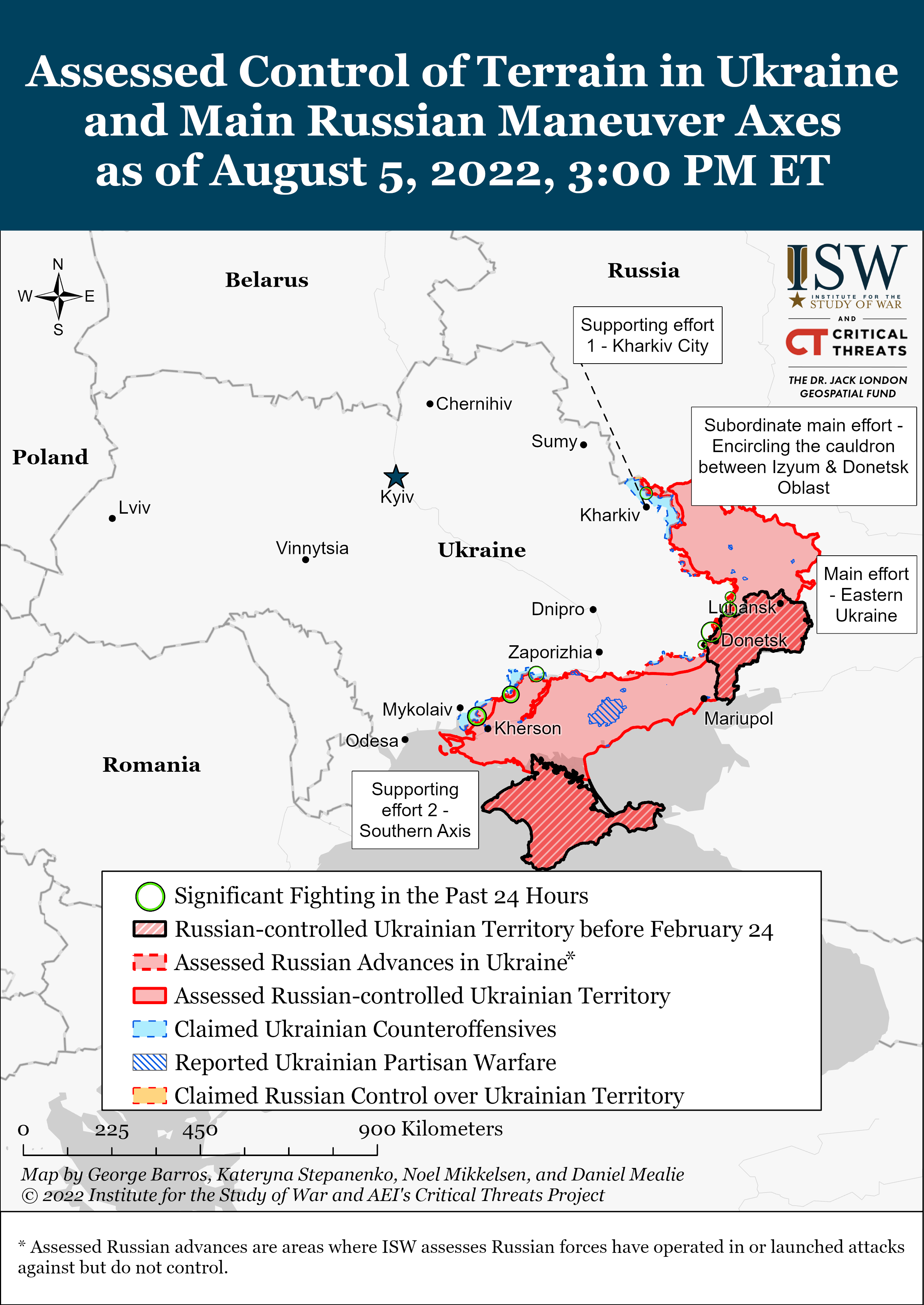 Russian forces did not conduct any confirmed ground attacks between Izyum and Slovyansk on August 5. The Ukrainian General Staff reported that Russian forces shelled settlements along the Kharkiv-Donetsk Oblast border northwest of Slovyansk, including Bohorodychne, Dolyna, Dibrivne, Mazanivka, Adamivka, and Kurulka.[3]

Russian forces continued offensive operations in the Siversk area on August 5. The Ukrainian General Staff stated that Russian troops are engaging in small arms fire near Siversk in addition to continued artillery strikes on Siversk City and surrounding settlements.[4] 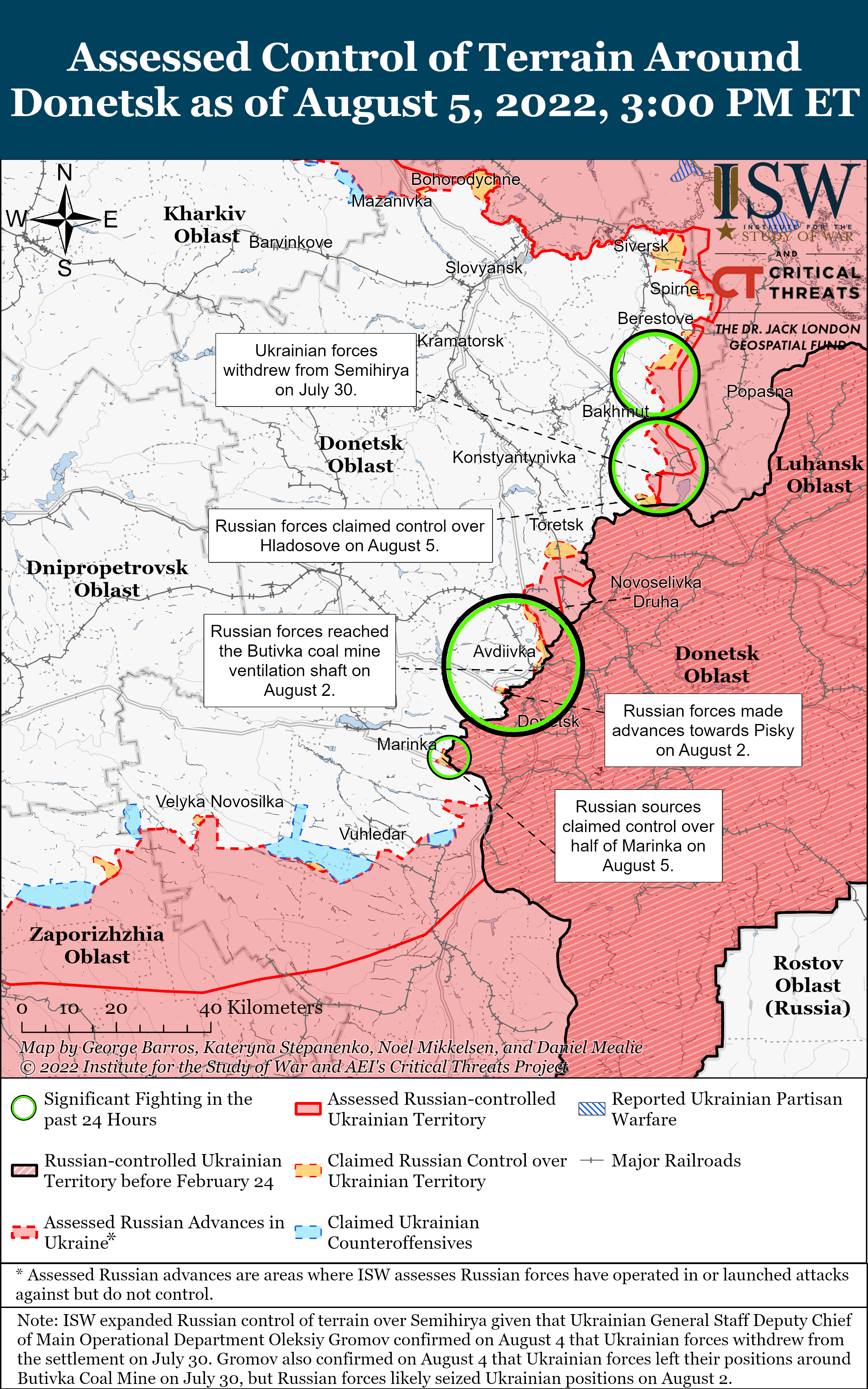 Russian forces conducted ground attacks south of Bakhmut on August 5. The Ukrainian General Staff reported that Russian troops unsuccessfully attempted to gain ground and improve their tactical positions in Zaitseve and Vershyna, both within 5km of the southern outskirts of Bakhmut.[5] Several Russian milbloggers claimed that Russian forces are actively fighting at the Knauf Gips Donbas gypsum factory on the southeastern outskirts of Soledar, about 8km northeast of Bakhmut and directly along the T1302 Bakhmut-Lysychansk highway.[6] Ukrainian sources stated that Russia troops are struggling to get through Ukrainian defenses surrounding Bakhmut, and Russian forces will likely continue to impale themselves on fortified Ukrainian positions under the cover of heavy artillery fire without securing large gains rapidly.[7] 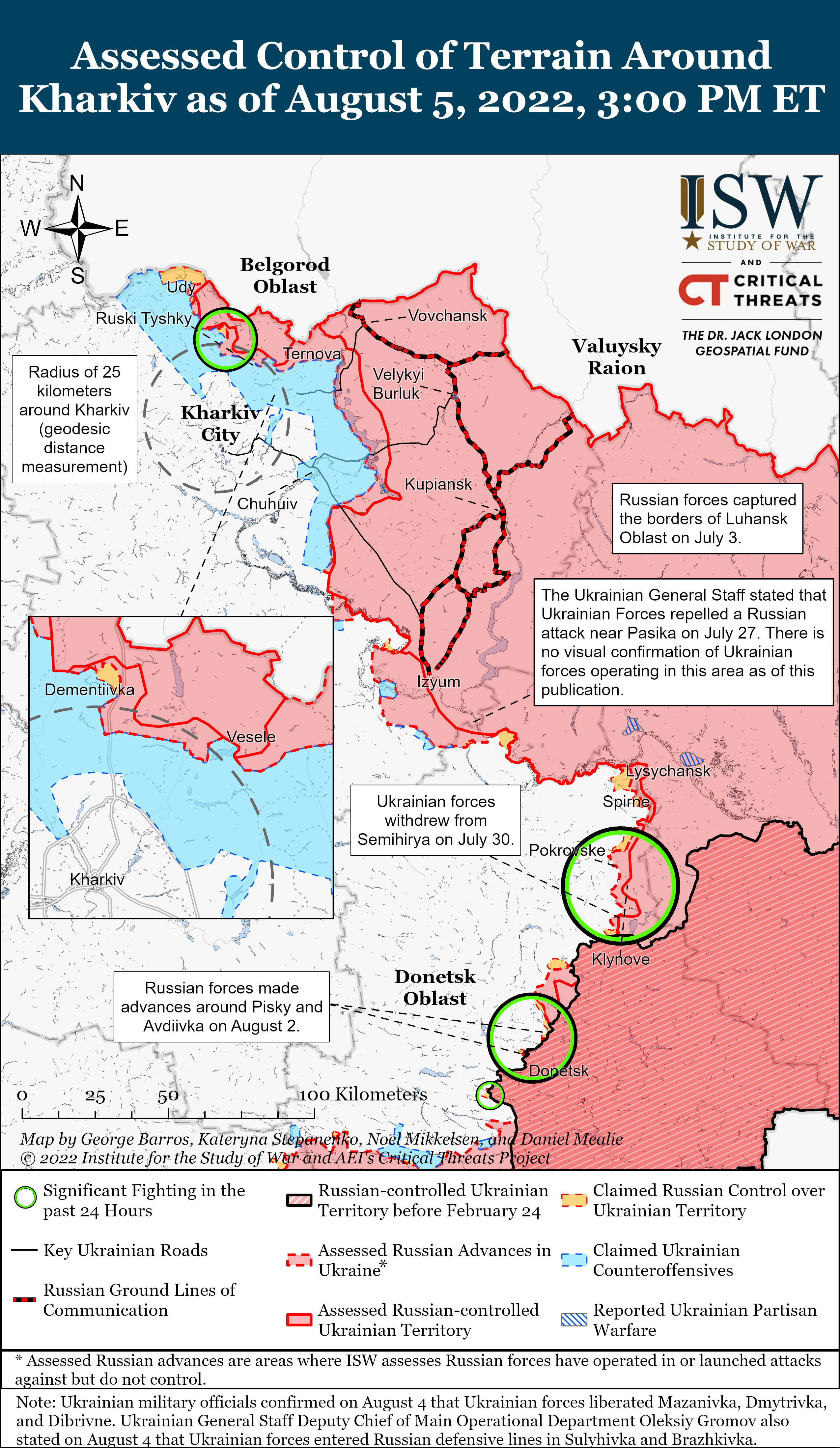 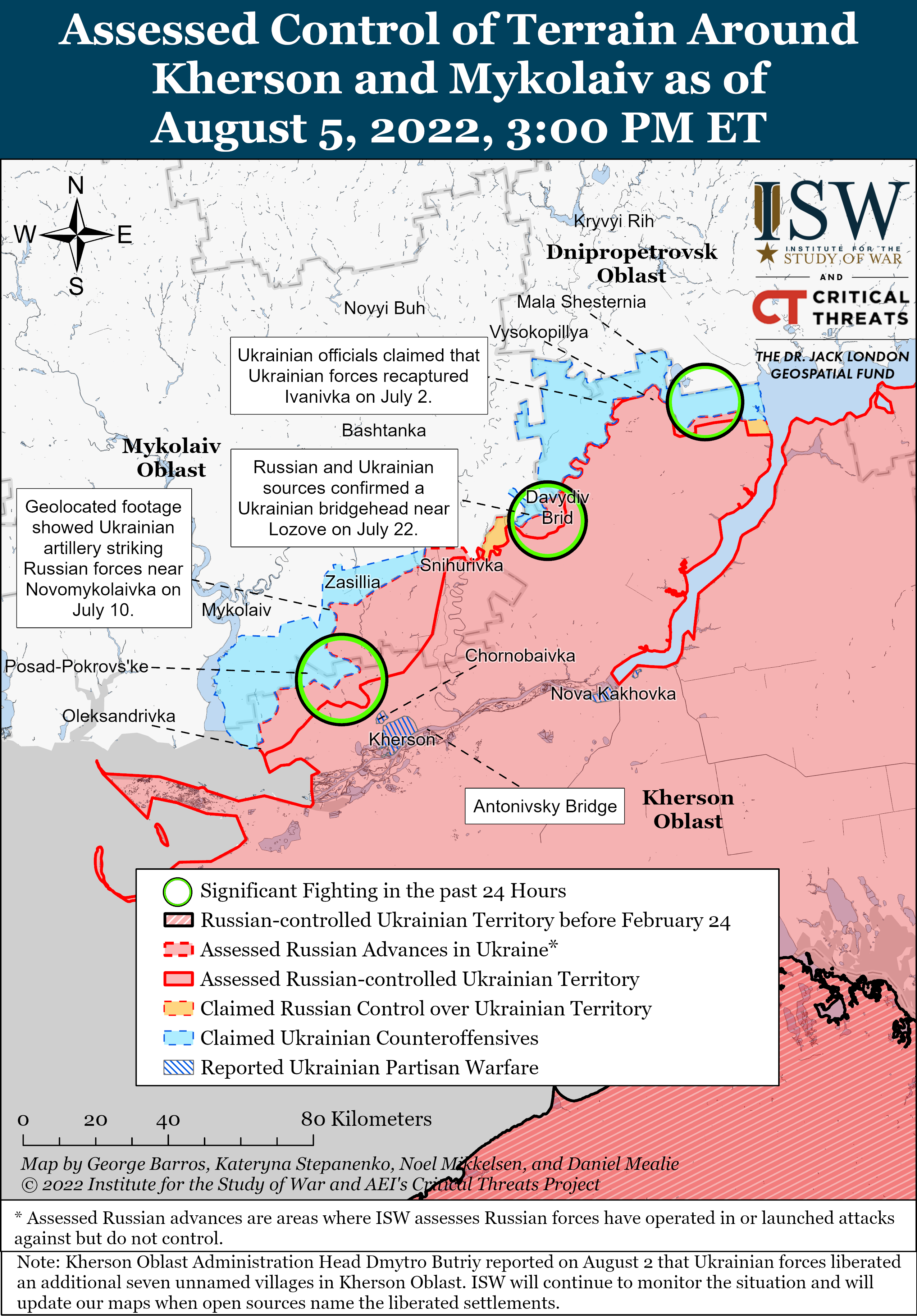 Russian sources confirmed the formation of the 3rd Army Corps on August 5. Russian milblogger and military correspondent Sasha Kots announced recruitment for the “Samara” volunteer battalion in Samara Oblast and noted that the battalion will join the 3rd Army Corps of the Russian Armed Forces.[28] The battalion is recruiting men between the ages of 18 and 50 who have completed at least middle or high school education, without required prior military experience.[29] ISW has previously reported that Ukrainian officials believed that Russian forces were forming a 15,500-person-strong 3rd Army Corps within the Western Military District (WMD) based out of Mulino, Nizhny Novgorod Oblast, but did not have official confirmation of its formation from Russian sources.[30] Sasha Kots’ announcement also indicates that the Kremlin is likely planning to compose the 3rd Army Corps at least in part from volunteer battalions.

Russian federal subjects (regions) continued to form regionally-based volunteer battalions. Omsk Oblast Governor Aleksandr Butkov reported on August 5 that Omsk Oblast is continuing to form three volunteer battalions - “Irtysh,” “Avangard,” and “Om” - to deploy to Donbas to provide engineering, medical and logistical support.[31] Butkov stated that Omsk Oblast will provide a one-time payment of 100,000 rubles (approximately $1,612) to recruits but specified that the funds will only be accessible after three months of service.[32] Omsk Oblast news outlet BK55 reported that recruits will receive a monthly salary is 40,000 to 50,000 (approximately $661-$826) that will increase to 130,000 (approximately $2,147) once they enter the territory of Ukraine.[33]

Russian forces continued to face low morale issues within its federal republics. Russian Telegram channel Rybar stated that the Akbuzat movement (a human rights activism movement) in the Russian Republic of Bashkortostan is calling on Bashkortostan servicemen to terminate their contracts with the Russian Armed Forces.[34] Rybar reported that Akbuzat leadership is offering legal assistance to those who break their contracts. Rybar condemned the movement and accused the Akbuzat leadership of sharing the personal data of applicants with third-parties, including the Security Service of Ukraine (SBU).[35] 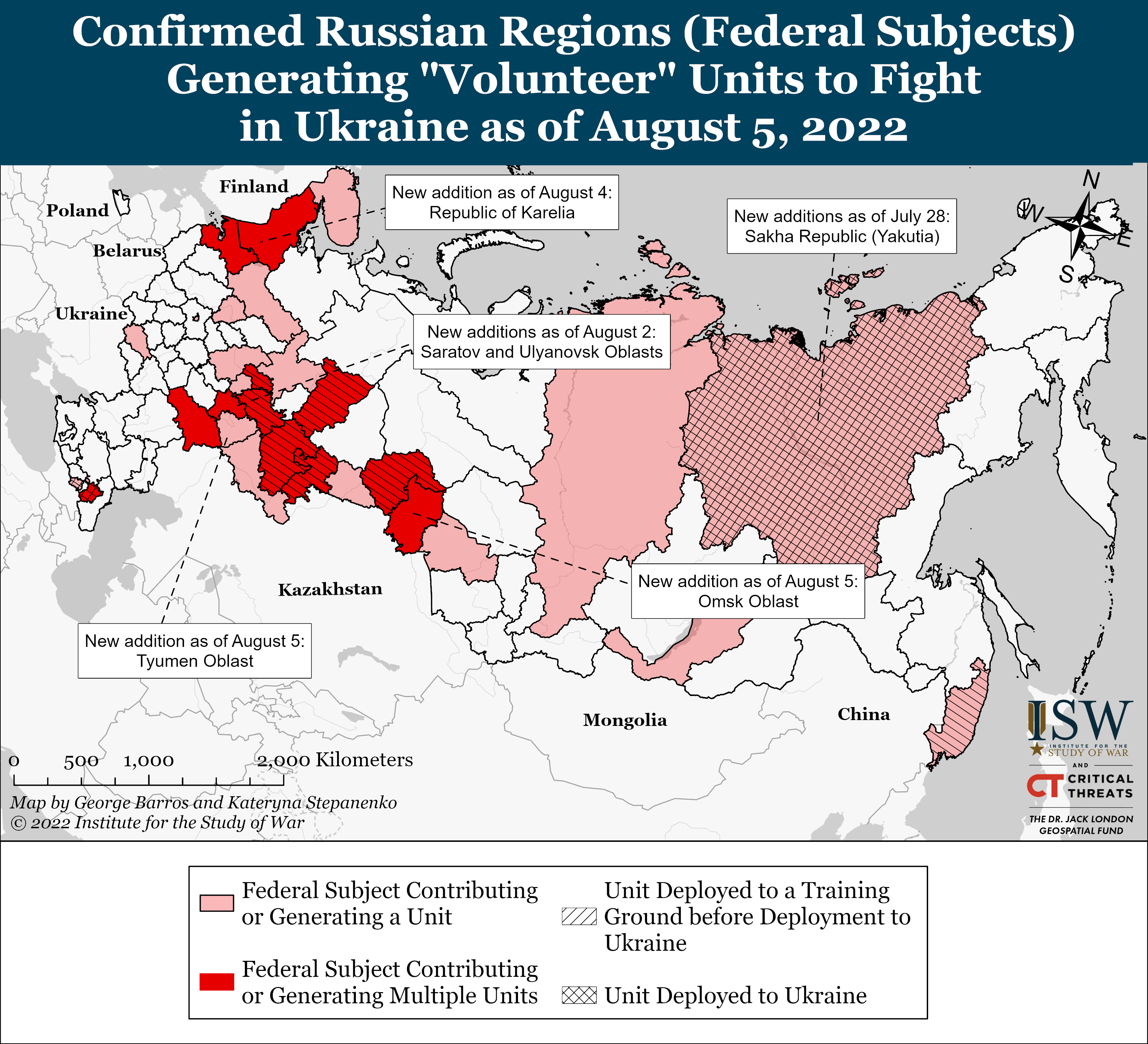 Ukraine’s Main Military Intelligence Directorate (GUR) reported on August 5 that Russian occupation authorities in Melitopol are forcing Ukrainian tenants who rent plots of agricultural land to negotiate new rental agreements, even if their agreements remain active.[36] Renegotiation of their rental agreements requires a Russian passport. The GUR also reported that Russian occupation authorities are requiring all Ukrainian vehicle license plates to transfer to temporary Russian-style license plates and to re-register their vehicles in a Russian system. Re-registration will require a Russian passport. The GUR also reported that the Russian-appointed Minister of Agrarian Policy for Kherson Oblast, Ukrainian collaborator Oleksii Kovalev, ordered Kherson farmers to register their businesses and pay taxes under Russian law. The GUR also reported that Russian authorities sent letters to businesspeople and self-employed residents of Kamianske, Zaporizhia Oblast requesting that they register their businesses and begin paying Russian taxes. Registration of business activity will require a Russian passport.

The Ukrainian advisor to the Kherson Oblast Military Administration, Serhiy Khlan, reported on August 4 that Russian occupation forces began to detain civilians for trying to exchange rubles to hryvnias in Kherson Oblast and began making pension payments in rubles to accelerate the forced rubleization of the occupied economy.[37] Pensioners hoping to collect their pensions are required to provide their personal information to occupation authorities. Khlan also reported that Russian forces require Ukrainian civilians who wish to have internet or cell phone access to provide their passports and personal information to authorities. Ukrainian Telegram Channel Mariupol Now reported that residents must bring their passports with them to register to vote in the annexation referenda.[38] The Ukrainian Mayor of Enerhodar, Zaporizhia Oblast, Dmytro Orlov, said that Russian authorities are using the records of utility companies and the passport information of pensioners to build a database of Ukrainian civilian information to falsify the results of the planned pseudo-referenda on accession into Rusia.[39] Orlov speculated that Russian forces are rushing to implement the referenda because ”they are well aware they have almost no time left.”

Voter registration for Russia’s annexation pseudo-referenda in occupied Ukraine will likely pose an impossible choice to pro-Ukrainian residents, who will need to provide identification to register to vote that can then be used to falsify or disregard their votes. The forced Russian passportization of occupied areas and the mass collection of residents’ data will enable occupying forces to better monitor dissent and votes and could allow Russian authorities to target and penalize any Ukrainian who votes against Russia’s annexation, as ISW previously reported.[40] Russian occupation authorities could also confiscate Ukrainian passports, making it more difficult for Ukrainian civilians to flee occupied areas.

Meanwhile, the Kremlin is continuing to replace Ukrainian collaborators in occupation administrations with Russian officials, likely to prepare for formal Russian governance of annexed areas. Russian authorities replaced the head of the Kherson Oblast Civil-Military Administration, Ukrainian collaborator Vladimir Saldo, with Russian Deputy Head of Kaliningrad Oblast Sergey Yeliseyev on August 4. Yeliseyev was an employee of the Russian Federal Security Service (FSB) from 1993-2005.[41] Saldo announced that he was leaving his position to seek medical treatment after consultations with colleagues and doctors. Russian sources reported that he suffered from a form of nervous exhaustion after complications from COVID-19, while the Russian outlet BAZA and various Ukrainian partisan sources suggested he had been poisoned and was in a medically induced coma.[42] Ukrainian partisan channel Zalizna Palianytsia boasted that the ”fate of the traitors has been decided in advance;” either Ukrainian partisans will kill them, or Russians will poison them.[43]