Ukrainian forces are continuing efforts to disrupt Russian ground lines of communication (GLOCs) that support Russian forces on the right bank of the Dnipro River. Ukrainian forces struck the bridge on the Kakhovka Hydroelectric Power Plant (HPP) dam again on August 13, reportedly rendering the bridge unusable by heavy vehicles.[1] Ukraine’s Southern Operational Command had previously reported on August 10 that the Kakhovka HPP dam bridge was unfit for use.[2] The Kakhovka bridge was the only road bridge Russian forces could use following Ukrainian forces’ successful efforts to put the Antonivsky road bridge out of commission. The UK Defense Ministry has claimed that Russian forces now have no bridges usable to bring heavy equipment or supplies over the Dnipro River in Kherson Oblast and must rely mainly on the pontoon ferry they have established near the Antonivsky road bridge.[3]  ISW cannot confirm at this time whether Russian forces can use the Antonivsky rail bridge to resupply forces on the right bank of the Dnipro River.

Russian forces cannot support mechanized operations at scale without a reliable GLOC.  Bringing ammunition, fuel, and heavy equipment sufficient for offensive or even large-scale defensive operations across pontoon ferries or by air is impractical if not impossible. If Ukrainian forces have disrupted all three bridges and can prevent the Russians from restoring any of them to usability for a protracted period then Russian forces on the west bank of the Dnipro will likely lose the ability to defend themselves against event limited Ukrainian counterattacks.

Indicators of degraded Russian supplies resulting from the disruption of Russian GLOCs over the Dnipro River would include: observed fuel and ammunition shortages among Russian forces in western Kherson Oblast; abandoned Russian vehicles; decreased intensity and, finally, cessation of Russian ground assaults and artillery attacks; possibly increased instances of Russian looting; increased reports from Russian soldiers about supply shortfalls; increased numbers of Russian prisoners of war taken by Ukrainian forces; and an observed absence of new heavy machinery transported to western Kherson.  Such indicators could take days or weeks to observe depending on how much Russian forces have been able to stockpile supplies on the west bank of the Dnipro and how successful Ukrainian forces are at finding and destroying those stockpiles while keeping the bridges inoperable.

Ukrainian Mykolaiv Oblast Head Vitaly Kim reported that unspecified Russian military command elements left upper Kherson Oblast and relocated to the left bank of the Dnipro River, suggesting that the Russian military leadership is concerned about being trapped on the wrong side of the river.[4] Ukrainian Advisor to the Minister of Internal Affairs Rostislav Smirnov also stated that Russia has deployed 90% of its air assault forces (presumably 90% of those deployed in Ukraine) to unspecified locations in southern Ukraine to augment Russian defenses or possibly prepare for Russian counteroffensives.[5] It is unclear whether the Russian airborne units Smirnov mentioned are concentrated exclusively in Kherson Oblast or also deployed near Zaporizhia. Elements of the Russian 7th Airborne Division are known to be operating in Kherson Oblast as of at least August 10.[6] The concentration of Russian Airborne Forces in western Kherson Oblast could indicate Russian efforts to use forces to defend against a Ukrainian counteroffensive that they are more likely to be able to exfiltrate by air if they are unable to hold the Ukrainians back or reestablish their GLOCs.  Airborne forces are easier to move by aircraft than regular mechanized forces, of course, although the Russians could find it challenging and very risky to try to move forces by air given Ukrainian attacks on airfields in Kherson Oblast and Russian failure to secure air superiority.

Russian forces may be reprioritizing advances in northeastern Donetsk Oblast in order to draw attention from Ukrainian counteroffensive actions in Southern Ukraine. Russian forces had seemingly scaled back offensive actions east of Siversk and conducted sporadic and limited ground attacks while relying heavily on artillery barrages of surrounding settlements since August 6.[7] However, since August 11, Russian forces have increased the number of limited ground attacks in the Siversk area.[8] These attacks, along with continued assaults in the direction of Bakhmut, may constitute an effort to draw Ukrainian materiel and personnel to the Bakhmut-Siversk line in northeastern Donetsk Oblast in order to detract Ukraine’s attention from critical areas in the South, where Ukrainian troops have been conducting effective counterattacks and may be setting conditions to launch a counteroffensive.[9] Russian forces may hope to shift both tactical and rhetorical focus away from the south in order to alleviate pressure on their own operations along the Southern Axis. ISW will continue to monitor the situation around Siversk. 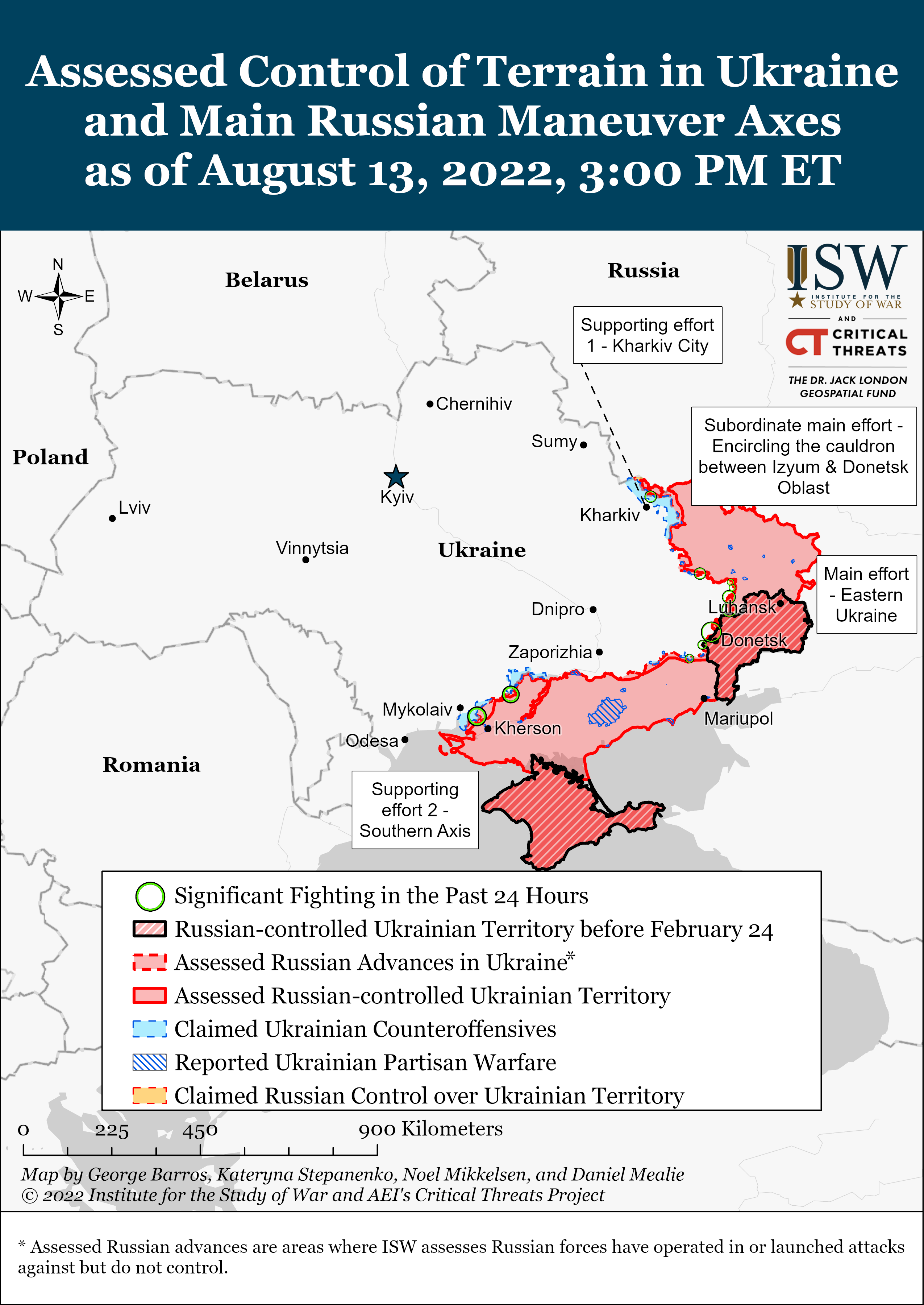 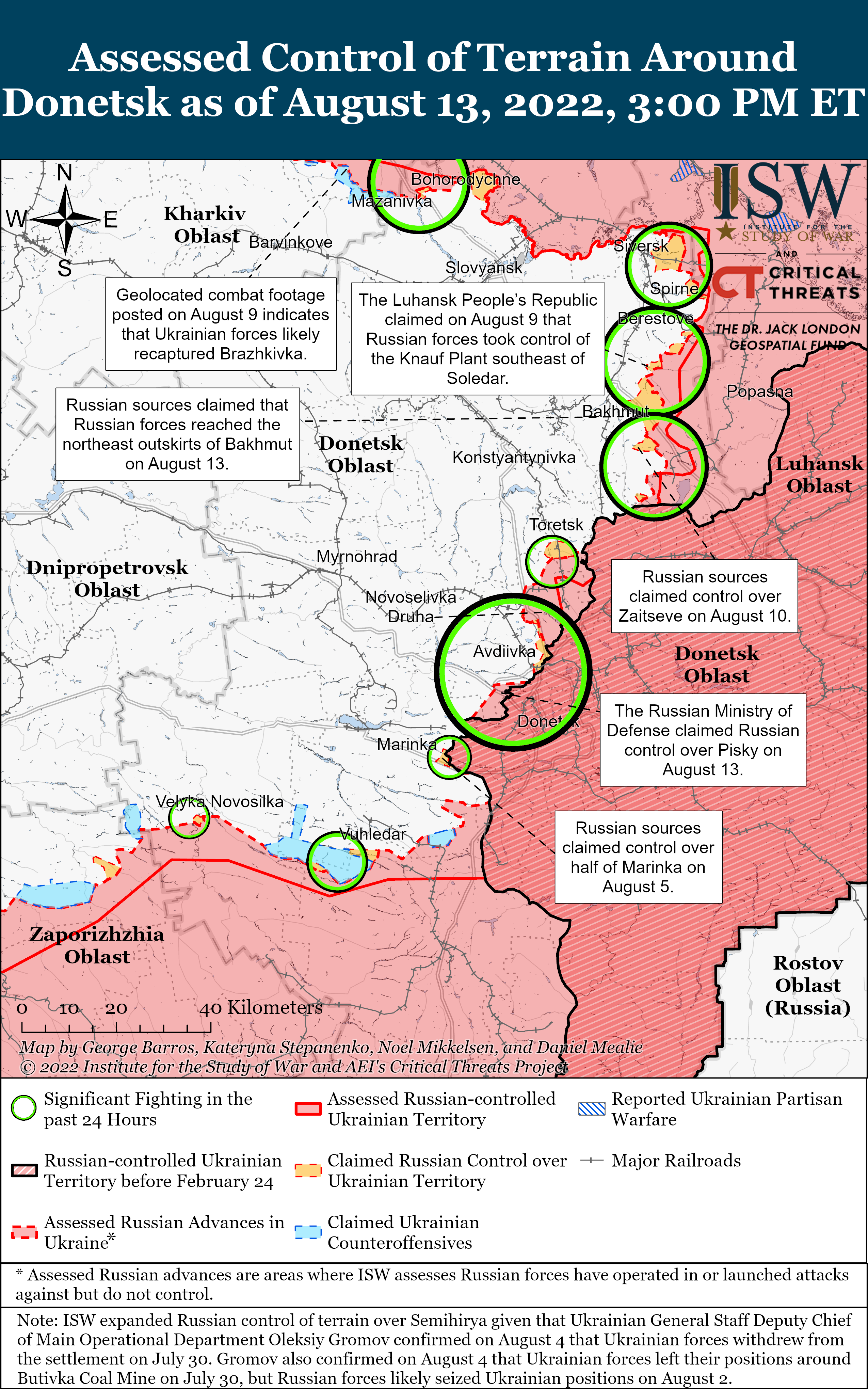 Russian forces may be reprioritizing efforts to advance on Siversk and conducted several limited ground attacks east of Siversk on August 13. The Ukrainian General Staff stated that Russian troops attempted to advance northward on Siversk along the Mykolaivka-Vyimka line.[12] Russian forces also continued efforts to push westward on Siversk from positions at the Lysychansk Oil Refinery in Verkhnokamyanske (13km east of Siversk) and Ivano-Darivka (8km southeast of Siversk).[13] Russian military correspondent Evgeniy Lisitsyn posted footage, reportedly of a Russian military convoy moving towards Siversk, which may correspond with the seeming intensification of ground attacks in this area over the last few days.[14]

Russian forces conducted several ground attacks north and southwest of Donetsk City on August 13. The Ukrainian General Staff reported that Russian forces attempted to advance through Ukrainian defensive lines in Oleksandropil and Krasnohorivka- 30km and 23km north of Donetsk City, respectively.[18] Russian forces additionally attempted to advance on Avdiivka from Spartak, about 4km south of Avdiivka.[19] The Ukrainian General Staff notes of Russian attacks north and south of Avdiivka are consistent with a statement made by a Russian source that Russian troops are attempting to focus on encircling Avdiivka from the south and north in order to capitalize on recent advances around Pisky and compensate for a generally stymied offensive operations on the Avdiivka-Donetsk City line.[20] Russian forces additionally attempted to improve their tactical positions near the Donetsk-Zaporizhia Oblast border and conducted ground attacks southwest of Donetsk City near Pavlivka and Novosilka.[21] 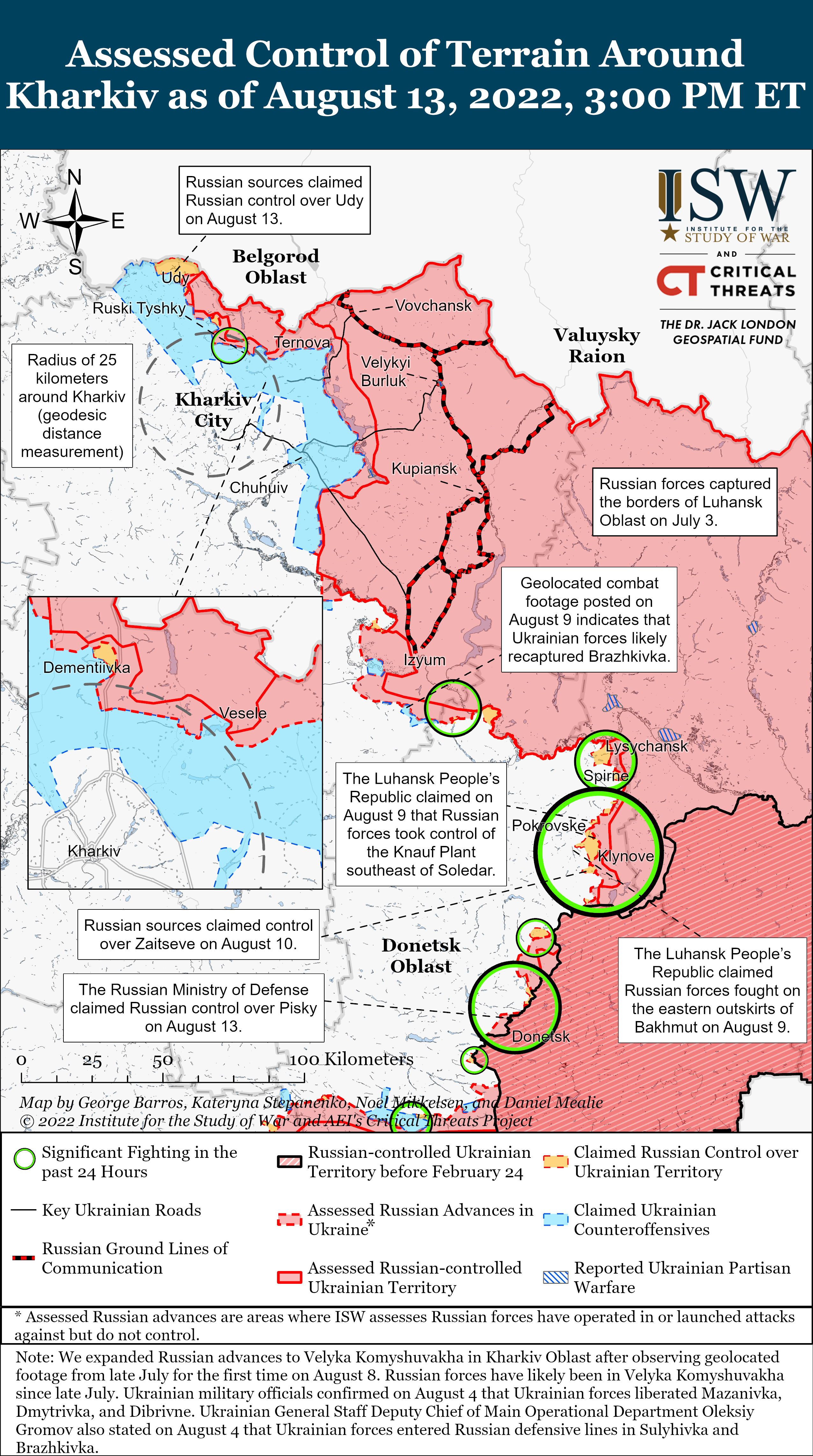 Russian and Ukrainian authorities again accused each other of shelling the Zaporizhzhia Nuclear Power Plant (NPP) in Enerhodar, Zaporizhia Oblast on August 13. Ukraine’s Main Intelligence Directorate (GUR) reported that Russian forces shelled the Zaporizhzhia NPP from positions in Vodyane on the southwestern outskirts of Enerhodar on the Dnipro River, damaging the first block of the pumping station of the Thermal and Underground Communicatons Workshop.[25] Luhansk People’s Republic (LNR) Ambassador to Russia Rodion Miroshnik claimed that Ukrainian forces fired nine rounds of unspecified munitions at the NPP from unspecified positions.[26] Geolocated footage posted to Twitter and Telegram on August 13 shows a Russian Pion 203mm artillery system operating roughly 11km from the Zaporizhzhia NPP.[27] 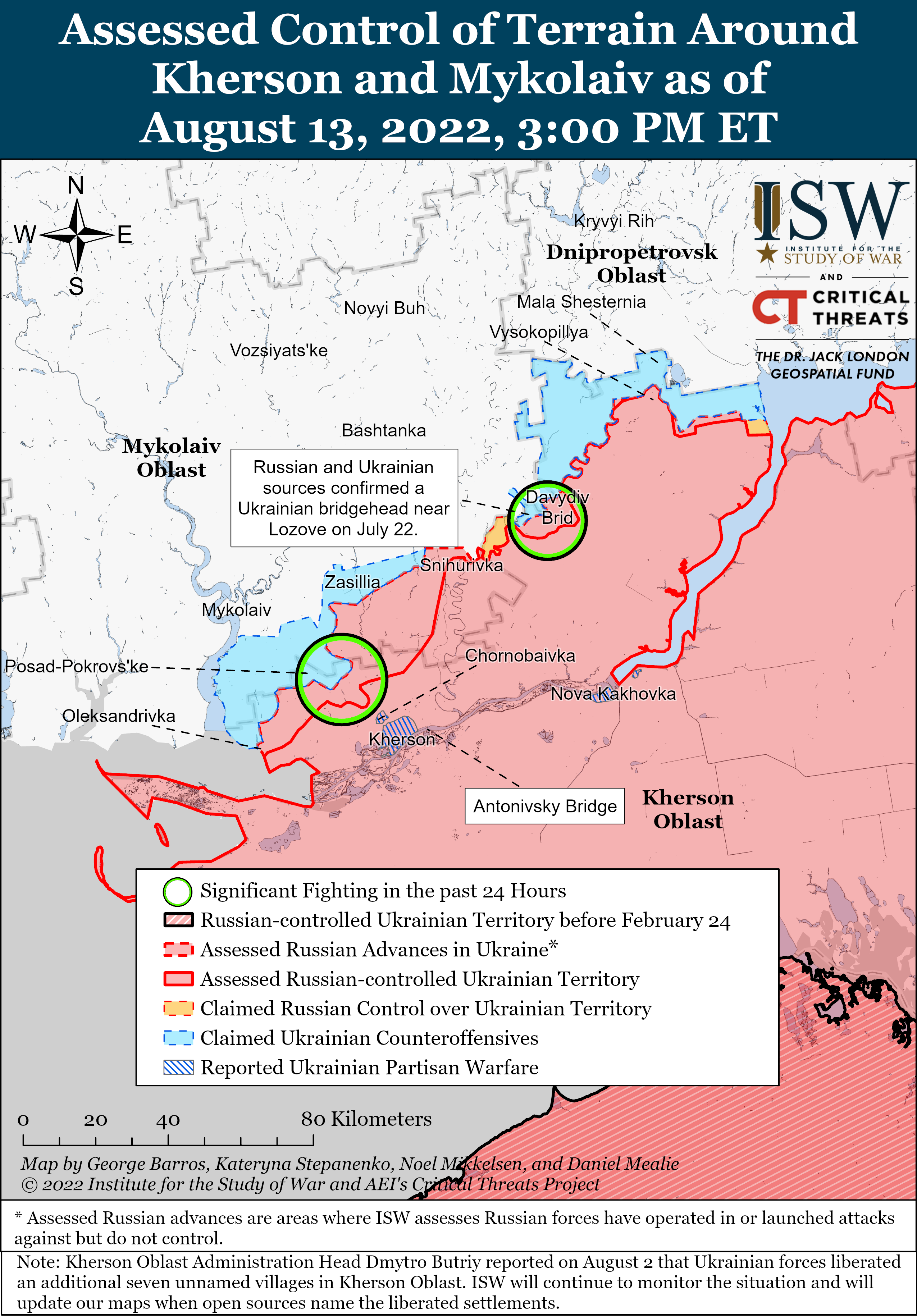 Russian reservists and members of “volunteer” units are reporting that Russian authorities have failed to deliver on promised benefits and pay. Russian authorities have reportedly placed recruits with no experience into positions as commanding officers at the company level or higher, failed to provide sufficient food, ammunition, or cigarettes to soldiers, failed to provide for the funeral arrangements of volunteer soldiers killed in action, and dumped soldiers in remote locations in Russia without transport home once their contracts expired. Several volunteers who have already returned home from Ukraine stated that they felt “deceived” and treated worse than regular contract soldiers.[33] Meanwhile, Russian officials have sent contract soldiers who refuse to fight following their deployment to Ukraine to special detention camps in Popasna and Bryanki, Luhansk Oblast, among other locations.[34] Russian officials continue to struggle to replace large personnel losses, prevent desertion, and to fund and logistically support the enticements necessary to do so.

Russian-backed occupation administrations are likely experiencing internal challenges that are preventing the coherent implementation of occupation regimes and impairing the ability of occupation officials to conduct reconstruction projects in decimated areas of Donbas. Workers from Russian water services company Mosvodokanal posted a video appeal to Russian President Vladimir Putin wherein they claimed that they never received payment for their work in Schastia, Luhansk Oblast.[35]  Mariupol Mayor Advisor Petro Andryushchenko similarly noted that Russian authorities brought workers from St. Petersburg to Mariupol and neglected to pay them. [36]

The prevalence of imported Russian labor in occupied regions of Ukraine suggests that Russian occupation authorities are struggling to persuade or forcibly coerce meaningful numbers of Ukrainian residents to work on reconstruction projects and may fit into the wider Kremlin campaign of population displacement by importing Russian citizens to Ukraine with promises of financial compensation. However, consistent reports that such Russian citizens have not been paid for their work in occupied areas of Ukraine indicate that occupation administrations lack coherent plans and financial backing from the Kremlin to carry out occupation agendas beyond employing Russians to work on service projects. Russian-backed occupation administrations are likely facing internal fragmentation over occupation agendas, as ISW has previously noted, which are likely exacerbated by a lack of direction and support from the Kremlin.[37]