The Islamic Revolutionary Guards Corps (IRGC) may be mobilizing retired servicemembers and other affiliated officers to suppress protests in Tehran on October 15. Iran International reported that the IRGC has called on its retirees and other affiliates to report to the Mohammad Rasoul Ollah Corps headquarters—the IRGC unit responsible for security in Tehran Province.[i] The regime is likely preparing for the planned countrywide protests on October 15. Trying to mobilize retirees and other affiliates would indicate that Iranian leaders are increasingly concerned by the mounting unrest.

CTP cannot verify this reporting. Iran International is UK-based and has an explicit anti-regime agenda. Individuals tied to the Saudi royal family reportedly fund it.[ii] The report that the IRGC is trying to mobilize retirees and others is consistent with CTP’s previous assessments that Iranian security forces are struggling with bandwidth constraints, exhaustion and low morale.[iii]

Demonstrators have killed more Iranian security personnel in the current protest wave than in any previous wave in the regime’s history according to regime statistics. Iranian state media reported that 26 security personnel have died.[iv] One IRGC major and one Basij Organization member were killed in Beyram, Fars Province on October 14.[v] The regime claims that protestors killed them. Beyram is a small town in a rural area. The killing of security officers there reflects the expansion of anti-regime violence to small towns deep in Iran in addition to major cities and border regions. The second most deadly wave for regime personnel according to regime statistics was the 2009 Green Movement, during which 23 security officers died.[vi] 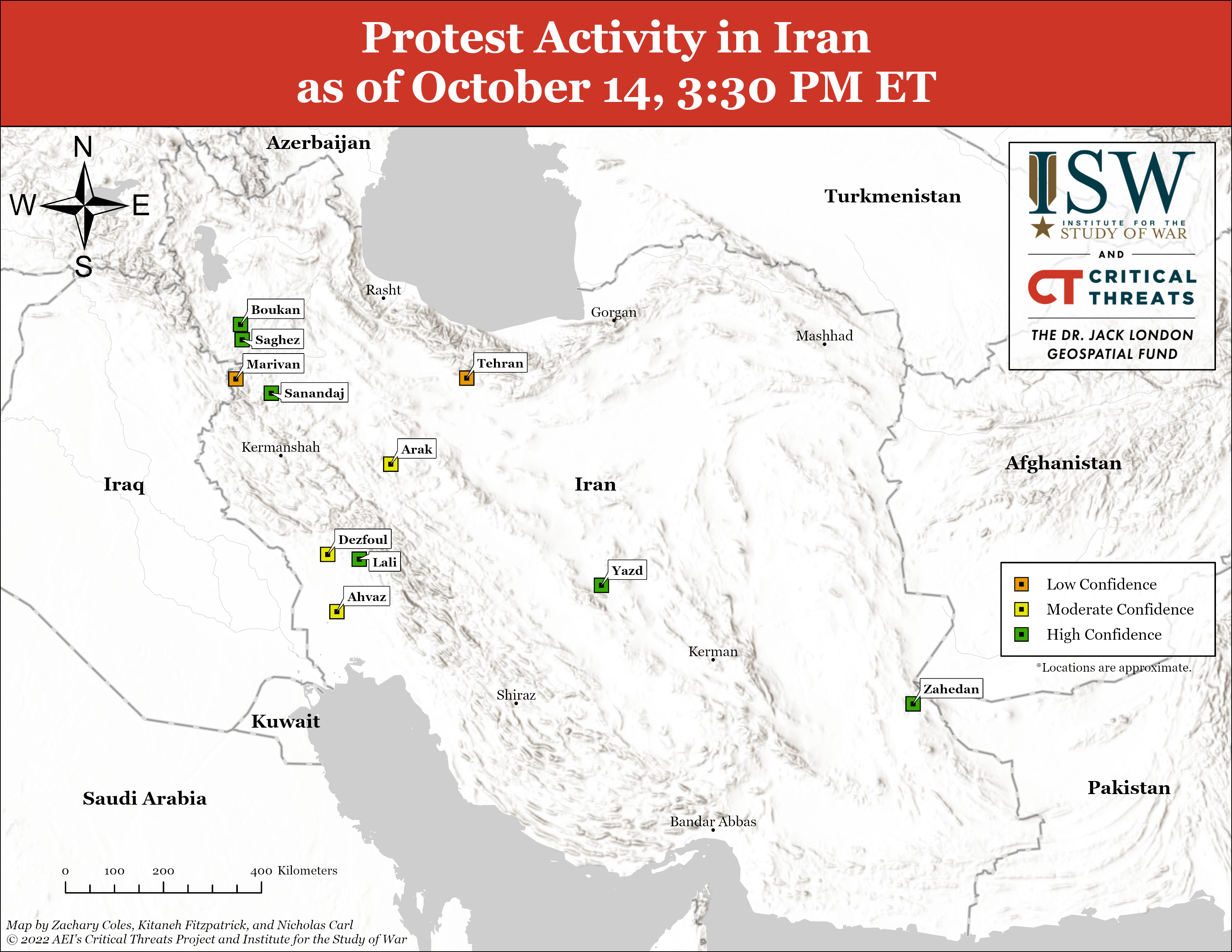 Security forces reportedly lethally injured and arrested dozens of Shahed High School students who had chanted anti-regime slogans in Ardabil several days earlier, marking a serious escalation in Iran’s protest response. Iranian security personnel allegedly arrested at least seven students and beat several others, 10 of whom were hospitalized and one of whom succumbed to her injuries.[vii] Iranian provincial officials have denied these reports.[viii]

Social media accounts that are representing themselves as youth groups organizing and coordinating protests called for countrywide unrest on October 15. Dozens of social media accounts are presenting themselves as provincial components of a broader youth movement aimed at overthrowing the regime.[ix] The movement does not appear to have a central headquarters or hierarchy—at least on social media—and some of these groups’ rhetoric is notably disjointed from the others. These accounts claim to have a presence in multiple Iranian cities, including Tehran, Karaj, Neyshabour, Hamedan, Shiraz, and Ahvaz.[x] Some of these accounts called for protests in Khuzestan on October 14, which did materialize in three different cities across the province on that date.[xi] Another account claimed that it had activated “sabotage groups” to destabilize the regime on October 14.[xii] The Tehran Neighborhood Youth group currently has the most followers and has posted for the longest period of time, possibly suggesting that it inspired copycat accounts based in other cities.[xiii]

Some of these groups are presenting themselves as having moved from protest organization to coordinating phase one insurgency attacks (see CTP’s update of Oct 10 for the definition a phase one insurgency).[xiv] The Karaj group tweeted instructions to protesters on how to ambush security forces.[xv] CTP has no means of evaluating the veracity of these groups’ claims, their leadership, or their membership at this time.

The regime staged and publicized a pro-regime rally commemorating the Prophet Mohammad’s birthday in Vali-Asr Square, Tehran City.[xx] State-affiliated media outlets unveiled a new poster in Vali-Asr Square on October 14.[xxi] The regime had previously installed a poster tying prominent Iranian women to the regime on October 13, but quickly removed it after some of these women publicly complained about being included and criticized the regime.[xxii] The regime reportedly launched another campaign centering on women’s role within the Islamic Republic, although this campaign mistakenly used the Hungarian and not the Iranian flag.[xxiii]

Lebanese Hezbollah (LH) media channels amplified Khamenei’s accusation that Western media is overstating the magnitude of protests to incite a revolution. LH-owned Al Ahed News highlighted talking points from Khamenei’s October 14 speech that framed the protest movement as “scattered riots.”[xxiv] LH-affiliated media personality Hossein Mortada further disputed reports of large protests in Tehran on Twitter and claimed that the media is uninformed about who controls the streets in Tehran.[xxv] Al Ahed also claimed that a DC-based “operations room” has instructed Western media to encourage a revolution against the regime by overplaying the size and scope of ongoing protests.[xxvi]

An IRGC-affiliated Telegram channel claimed that the Artesh Air Force flew several combat aircraft around the Iran-Azerbaijan border on October 14 to warn the Azerbaijani government against pursuing policies hostile to Iran.[xxvii] The regime may suspect that Azerbaijan has a role in stoking the protests among ethnically Azeri communities. Iranian state media has accused Azerbaijan of hosting Israeli intelligence agents as well.[xxviii] Tensions between Iran and Azerbaijan have flared in recent months. Iran has opposed Azerbaijani efforts to expand its transportation infrastructure into Armenia, arguing that it would block Iranian economic access to European and Russian markets.[xxix]