The ongoing, anti-regime protests could interact with and feed off of preexisting insurgencies in Iran. There are at least three active but low-level insurgencies in Iran’s northwestern, southwestern, and southeastern border regions. Iranian Arab, Baloch, and Kurdish militant groups have leveraged economic and political frustrations among marginalized minorities in Iran to fuel these groups’ anti-regime agendas for decades. These groups, which include the Kurdistan Free Life Party and Jaish al Adl, have historically conducted attacks into Iran and clashed with state security services regularly.

The greatest violence in the current protest movement has been in northwestern Kurdistan Province and southeastern Sistan and Baluchistan Province partly because insurgent groups operate in these areas.[i] These groups are likely trying to coopt and stoke the unrest to fight the regime. State security services are using greater force in these areas as well.

Demonstrations in the Iranian heartland may already be approaching the threshold identified in US military doctrine for a “latent and incipient” insurgency. CTP has not yet observed clear indicators that the protest movement has crossed the threshold and is not prepared to forecast that it will. American counter-insurgency doctrine, using a modified version of the Maoist insurgency framework, defines the lowest level of insurgency as follows:

“The first phase is latent and incipient. During this phase, activities include the emergence of insurgent leadership, creation of initial organizational infrastructure, training, acquisition of resources, and political actions, such as organizing protests. A group that eventually becomes members of an insurgency may simply be a legitimate political group at this stage. Governmental actions and changes in society can transform political groups into insurgencies.”[ii]

Protestor organizations are understandably cautious about leaving observable traces in the open source, making it impossible to gauge their extent, capabilities, or intentions at this time. But the appearance of nascent protestor organizations like the Neighborhood Youth of Tehran suggesting that they can do more than simply generate protests—specifically preventing regime security forces from entering certain areas of Tehran and other cities—could indicate an inflection in their capabilities or intentions.[iii] The slogans and chants calling for the overthrow of the regime, particularly those saying that this is not a protest but a revolution, are another possible indicator.[iv]

The Syrian civil war, however, followed a similar path to the one Iranian protest may be on—peaceful protests were met by violent oppression that fractured the security forces. Security force defectors joining the protests helped organize them and prepare them to defend themselves against increasing regime violence. Limited indications of Iranian security force defections are emerging, although some Iranian security forces have joined protestors in previous protest waves without turning them into organized insurgencies. The risk to the Iranian regime is there, however, if the current protest wave interacts with Iran’s long-standing insurgencies and the regime’s brutal response in ways that propel it along the insurgency spectrum. 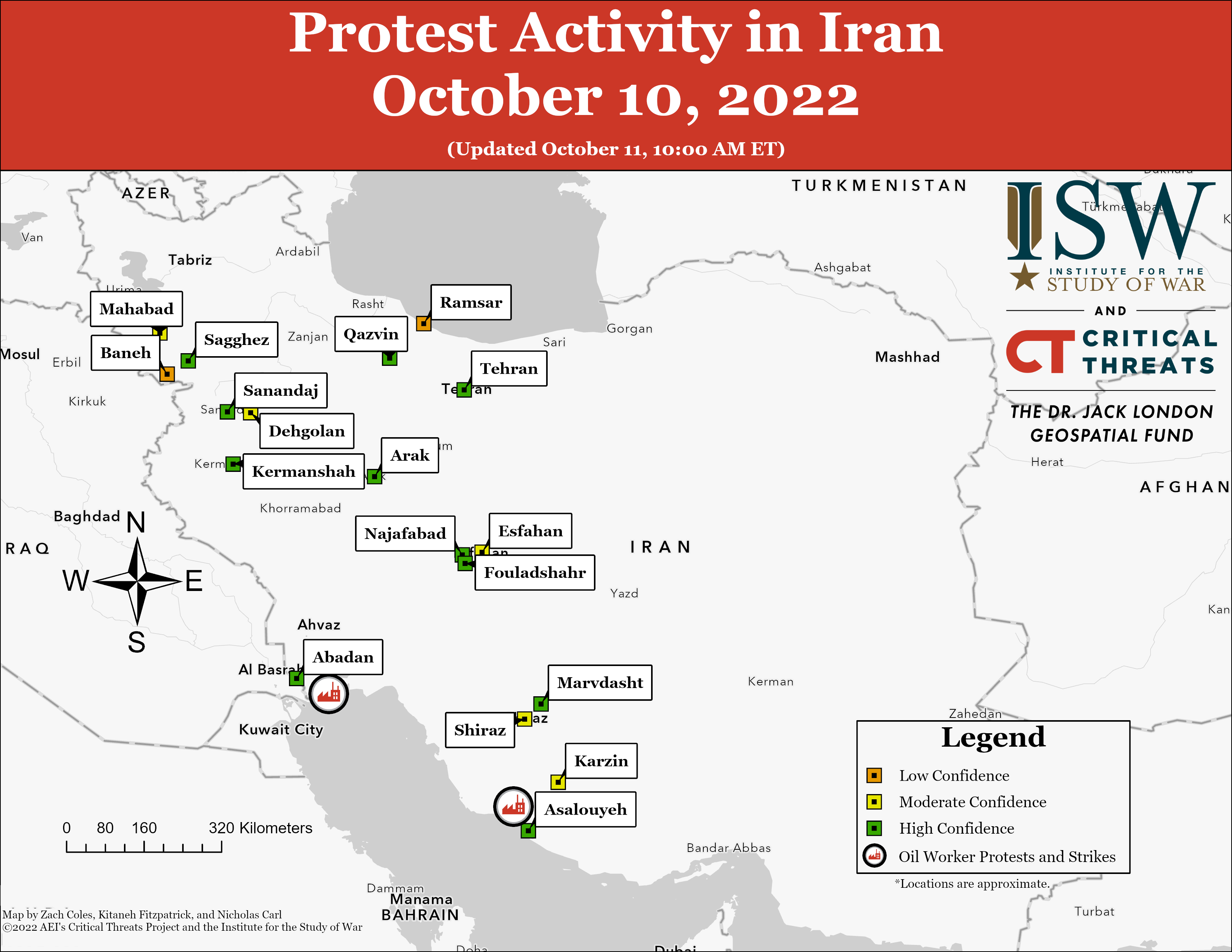 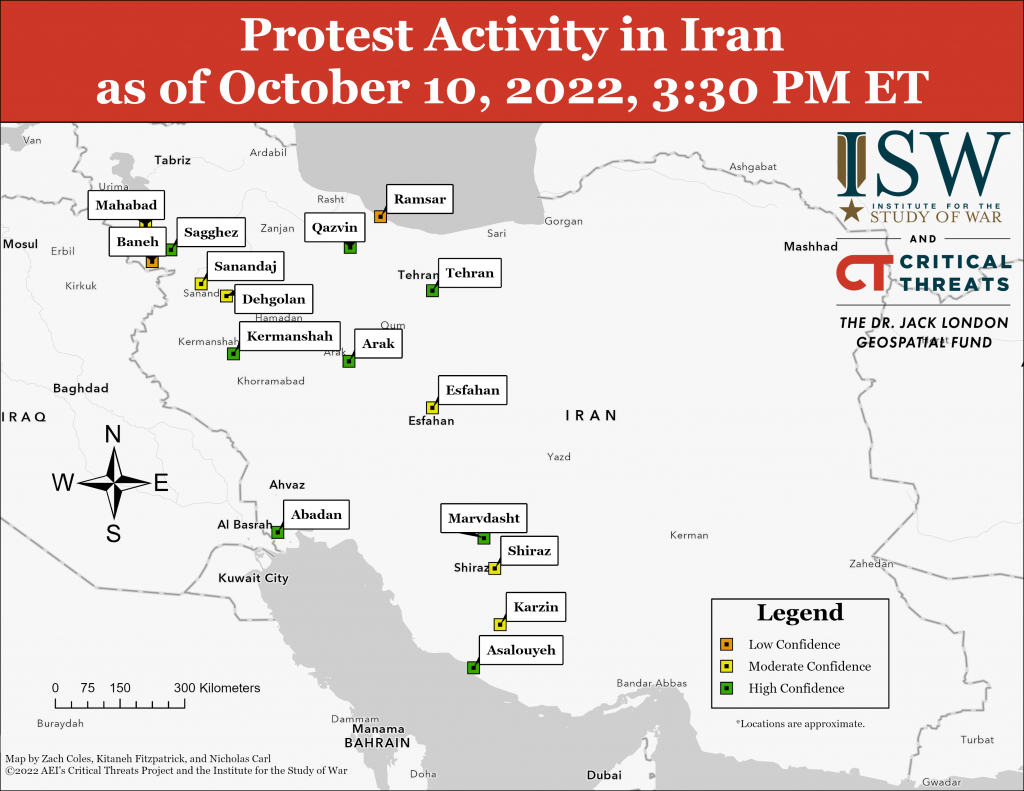 Iranian security forces violently and significantly escalated against anti-regime protesters in Sanandaj, Kurdistan Province. Iranian security personnel fired live ammunition and teargas indiscriminately at protesters and into people’s homes on October 9 and 10.[v] A Kurdish human rights outlet reported that Basij members surrounded and enclosed residents in several local neighborhoods, preventing them from leaving, and fired teargas at residents chanting anti-regime slogans from their homes on October 10.[vi] Other human rights organizations reported that security forces have killed multiple several Sanandaj residents, including a seven-year-old child.[vii] Some social media users are comparing the regime’s brutal protest crackdown in Sanandaj to a war zone.[viii]

A Kurdish human rights organization based in Europe reported that some Kermanshah Provincial Law Enforcement Command members assigned to suppress unrest in Sanandaj, Kurdistan Province are refusing to participate in the ongoing crackdown.[ix] CTP cannot verify these claims.

Oil workers participated in strikes and anti-regime protests in Bushehr and Khuzestan Provinces on October 10, threatening the regime’s oil production. Over 1,000 petrochemical workers in Asalouyeh, Bushehr Province participated in anti-regime solidarity strikes and protests.[x] Asalouyeh workers reportedly blocked highways, set fire to some facilities at the petrochemical plant, and chanted revolutionary slogans, including “this is the year of blood, Khamenei will be overthrown.”[xi] Oil Refinery workers in Abadan, Khuzestan Province similarly participated in strikes and anti-regime protests.[xii] The Council of Oil Contract Workers alleged that 4,000 oil workers participated in strikes on October 10, including several other oil refineries along the Persian Gulf.[xiii] The council called for further protests and strikes throughout Iran, urging protesters to “prepare for nationwide and back-breaking strikes.”[xiv]

Judiciary Chief Gholam Hossein Mohseni Ejei adopted a conciliatory tone toward protesters on October 10. Ejei called for engaging protesters in dialogue and discussing reform, diverging from other senior political and security officials who have struck a harder line toward protesters in recent days.[xv] It is unclear whether Ejei’s comments signify a shift in regime messaging in response to the growing oil worker strikes or whether Ejei is diverging from the regime talking points. President Ebrahim Raisi briefly articulated a similar position on September 28 but has adopted a more aggressive stance since then.[xvi] CTP continues to monitor the situation and will develop this assessment in the coming days.

Demonstrations will likely increase in scale and size on October 12. Anti-regime group The Neighborhood Youth of Tehran published a statement calling for protests on this date and provided protestors with guidance on how deter and blunt Iranian security forces.[xvii]