Iranian leadership is still largely speaking to itself rather than to the Iranian people. Iranian officials continue to ignore protester grievances and are instead emphasizing their readiness to brutally crack down. Supreme Leader Ali Khamenei addressed the protests publicly for the second time on October 12, reiterating his accusation that foreign enemies are responsible for the unrest.[i] He dismissed the protests as minor events. Khamenei did not mention Mahsa Amini or the citizens killed in the protests. Khamenei likely sought to reaffirm to the political and security establishment his approval of the brutal crackdown while portraying strength.

Other Iranian officials are following Khamenei’s lead, ignoring protester grievances and boasting of their tools of repression. President Ebrahim Raisi met with the Supreme Cyberspace Council on October 11 to discuss efforts to develop the national intranet. The regime uses this intranet to substitute for foreign internet services, asserting greater control over the Iranian information space.[ii] A senior Law Enforcement Command (LEC) official, Brigadier General Hassan Karami, boasted that the LEC Special Units use miniature drones to track protesters who flee into alleyways.[iii] Karami commands the Special Units, which is the LEC’s highly trained, anti-riot force. These units are heavily involved in the ongoing crackdown.

This messaging suggests that the regime will not make concessions to the protesters. This rhetoric will not assuage protester frustrations either. Regime officials may hope that the protests will lose momentum with time and brutality and slowly dissipate, but their actions and failures even to speak to their people directly are more likely to fuel continued unrest.

There was nothing significant to report today.  CTP will include this section in the future only when reportable events occur.

Anti-regime protests occurred in at least 29 cities in 18 provinces on October 12. Commercial and industrial strikes continued in nine cities and spread to Baneh, Kurdistan Province, and Sarpol-e Zahab, Kermanshah Province. Iranian security forces responded most violently to protests in ethnically Kurdish areas of Iran, which have had some of the country’s most frequent protests.

CTP assesses with moderate or high confidence that protests occurred in the following locations: 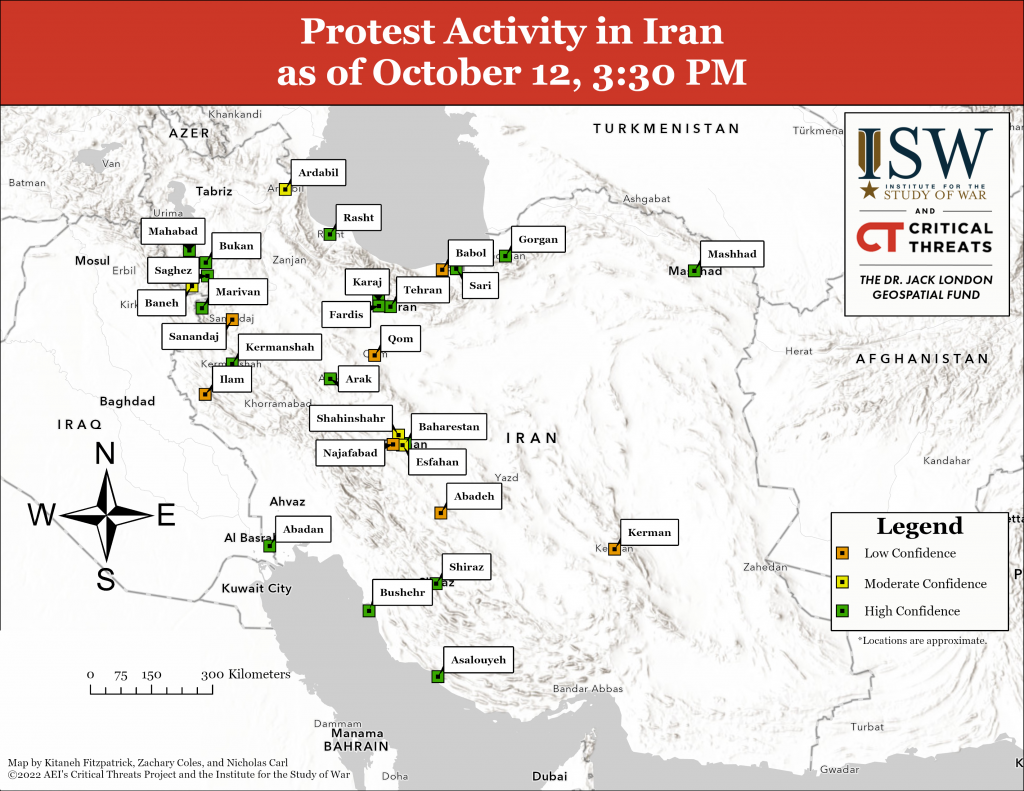 Protesters continue to demonstrate their capability to coordinate large-scale demonstrations despite expanding regime censorship and increasingly violent suppression. Protests grew significantly on October 12 after CTP reported protests in at least 16 cities in 11 provinces on October 11. Protesters started calling for protests on October 12 as early as October 10.

The Iranian regime activated internet and telecommunication restrictions earlier than usual on October 12. The regime restricted internet access at approximately 0600 local time on October 12.[iv] Anti-regime outlet Iran International claimed that Iranian mobile devices could connect to the country’s national intranet but not to the global internet.[v] The regime has typically delayed restricting access until the late morning or early afternoon during the current protest wave. The regime decided to impose internet and telecommunications restrictions earlier likely in anticipation of the October 12 surge in preplanned protest activity. The earlier shutoff nevertheless failed to prevent protests from occurring or to stop Iranians from getting reports and footage of protests to the outside world.

Commercial and industrial groups are increasingly attempting to coordinate protests and strikes between cities. The Free Union of Iranian Workers published an October 12 statement urging Iranian workers to expand labor strikes to their cities and industries.[vi]

Education Minister Yousef Nouri stated on October 11 that the regime has sent arrested high school students to “psychological centers” to educate and reform them.[vii] Nouri neglected to say how many students the regime sent to these centers when a journalist asked him, stating that “there are not many.”

The Iraqi parliament ostensibly still plans to select a new president on October 13. The Kurdistan Democratic Party (KDP) withdrew its nominee for Iraqi president on October 12 and proposed a compromise candidate to the Patriotic Union of Kurdistan (PUK). The KDP nominated PUK-affiliated former Iraqi Water Minister Latif Rasheed as its compromise candidate.[viii] The PUK has yet to accept the KDP’s compromise candidate.[ix] A continued KDP-PUK deadlock on the presidential nomination may prevent Parliament from voting on a president on October 13. No political group has yet petitioned to delay the October 13 session. Supporters of Iraqi nationalist Shia cleric Moqtada al Sadr and the anti-corruption Tishreen movement will likely protest if parliament meets whether or not it selects a new president.  If parliament meets without choosing a new president its failure could provide additional momentum to protests aimed at further delegitimizing the Iran-backed Shia Coordination Framework’s efforts to form a government.