Over 20 drones and missiles struck the world’s largest oil-processing facility, the Abqaiq plant in eastern Saudi Arabia, on September 14. Al Houthi–run media *credited the al Houthis for the attack. The US government has since assessed that the attack originated from Iran, not Yemen, and the US and several European countries have blamed Iran for the attack.

The al Houthi movement attempted to leverage the aftermath of the attack to secure a political settlement from the Saudi-led coalition in Yemen by threatening attacks on the UAE and offering Saudi Arabia a cease-fire. Both sides have exchanged attacks since this offer, however. The aftermath of Abqaiq may also widen fissures in the al Houthi movement over its relationship with Iran. Some al Houthi officials reportedly warned the US and Saudi Arabia of another planned Iranian strike, possibly to distance the group from Tehran or avert retaliation.

Al Qaeda in the Arabian Peninsula

The conflict in Yemen significantly challenges US efforts to combat al Qaeda and Iranian influence in the Middle East. Iran has expanded its influence in the Arabian Peninsula over the Yemeni civil war. The Iranian-backed al Houthi movement threatens Red Sea security and asymmetrically threatens US Gulf state partners, helping Iran maintain a degree of plausible deniability for its destabilizing regional activities. Al Qaeda in the Arabian Peninsula (AQAP), which had been al Qaeda’s most virulent affiliate, retains its sanctuaries in southern Yemen despite ongoing counterterrorism operations. The underlying conditions that AQAP exploited to strengthen remain, and the group could reconstitute as Yemen fragments. Other Salafi-jihadi groups, including the Islamic State, are also present in Yemen. US Gulf partners, especially Saudi Arabia and the UAE, have become entangled in the Yemeni civil war, now a regional conflict. Near-famine conditions in Yemen are driving the world’s worst humanitarian crisis, which could further destabilize the region.

Yemen has fragmented. President Abdu Rabbu Mansour Hadi’s government is weak with most of its influence limited to two governorates in northern Yemen. Multiple Yemeni factions, many of which have security forces backed by the UAE or Saudi Arabia, seek to secure their own interests even as they remain nominally aligned against the al Houthi movement. Few of the security forces in Yemen respond to the Hadi government directly. Southern Yemenis remain divided but are increasingly calling for greater autonomy from the government. A southern secessionist group seized Yemen’s de facto capital, Aden, from the Hadi government in August and is attempting to expand its influence across the south. The al Houthi movement controls most of northern and central Yemen, including the capital, Sana’a, after seizing power in September 2014.

A political resolution to the Yemen conflict is unlikely. The conflict is stalemated. The UN effort is not viable and has empowered the al Houthis. The Stockholm Agreement, signed by the Hadi government and al Houthis in December 2018, demilitarizes three Red Sea ports should it be implemented. The UN intended Stockholm as a confidence-building measure for further negotiations, but the effect was preserving al Houthi control of al Hudaydah port. The al Houthis are waging a campaign of attacks against Saudi Arabia to compel Riyadh to accept a ceasefire that would secure al Houthi interests. The UAE, a key contributor to the Saudi-led coalition, redeployed most of its forces from the anti-al Houthi front by in June 2019.

The al Houthi movement has participated in an Iranian-led escalation against the US and its Gulf partners while maintaining independent decision-making from Iran. The al Houthis escalated its pace of attacks against Saudi Arabia in May in tandem with Iranian escalations in the Gulf. The al Houthis have shot down two US surveillance drones over Yemen since then. Iran facilitates these attacks by furnishing the al Houthis with missiles and drones. The attacks serve Iranian interests by punishing Saudi Arabia for the US’s “maximum pressure” campaign while absolving Tehran of overt responsibility. Al Houthi attacks also impose a cost on Saudi Arabia for its intervention in Yemen.

The al Houthis *claimed responsibility for a drone attack on the world’s largest oil-processing facility in Abqaiq, Saudi Arabia, on September 14. The attack forced Riyadh to temporarily reduce oil production *by half and resulted in the largest spike in oil prices since the First Gulf War. Iran is likely responsible for the attack, which required a level of sophistication greater than that demonstrated by past al Houthi attacks. This is the second time the al Houthis have claimed an attack in Saudi Arabia that was actually conducted by Iran or Iranian proxies. The al Houthis claimed a drone attack on a Saudi pipeline conducted by an Iranian-aligned force in Iraq in May. (See Figure 1.)

The al Houthi movement may be fracturing over the group’s relationship with Iran. Al Houthi officials approached US and Saudi officials after the Abqaiq attack and warned that Iran had requested al Houthi assistance with a follow-up strike against Saudi Arabia, according to a Wall Street Journal report. These al Houthi officials are concerned that the group’s growing relationship with Iran runs counter to al Houthi interests, while other al Houthis support close ties with Iran. Potential fracturing could cause an intra–al Houthi conflict that would weaken the movement to the benefit of the Saudi-led coalition and the internationally recognized Yemeni government. The al Houthi bloc has survived fracturing in the past, however.

Forecast: The al Houthi movement will reiterate its calls for a cease-fire in the coming weeks but will not reach one with Saudi Arabia due to mutual mistrust. The al Houthi movement will continue to conduct frequent drone attacks against airports and military sites in southern Saudi Arabia interspersed with larger attacks against Saudi oil infrastructure over the next three months. (Updated September 24, 2019)

Figure 1. Al Houthi–Claimed Missile and Drone Attacks in Saudi Arabia Since May 14, 2019 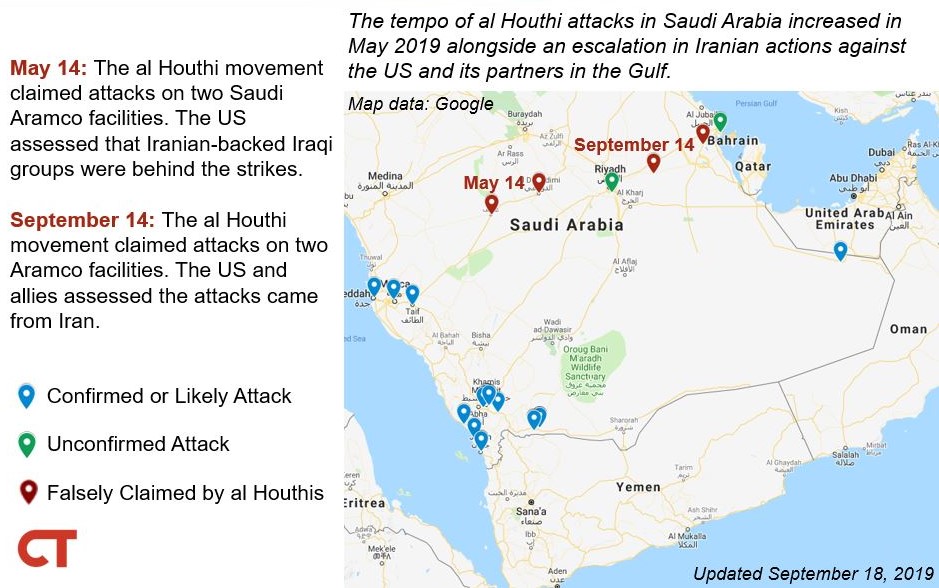 Al Qaeda in the Arabian Peninsula

Conflict between southern Yemeni factions and forces loyal to the internationally recognized Yemeni government is creating the conditions for AQAP to strengthen in southern Yemen. Fighting broke out in southern Yemen when the Transitional Political Council for the South (STC), a southern secessionist group, seized Aden – the de facto capital – on August 10. This takeover aimed to unseat the Yemeni government from southern Yemen. Clashes continued in *Aden and spread to neighboring *Lahij governorate in September. The involvement of Yemeni security forces that had been participating in counterterrorism operations lifts pressure from AQAP. The group has already capitalized on the unrest by *seizing a district in the southern governorate of Abyan.

AQAP may be resuming a campaign in another southern governorate, Hadramawt, as local security forces are drawn into the conflict between the STC and Yemeni government. Likely AQAP militants conducted several *attacks *targeting *Saudi and Saudi-backed Yemeni security forces in September. Saudi-backed forces aligned with President Abdu Rabbu Mansour Hadi’s government in Hadramawt’s interior may be *preparing for clashes with STC-aligned forces in coastal Hadramawt. These Hadi government–aligned forces may attack coastal Hadramawt, creating a security vacuum in the governorate’s interior. (For more information on the conflict between the STC and the Hadi government, see the September 10 Yemen File.)

Forecast: AQAP will expand its presence in Hadramawt’s interior by backfilling Yemeni security forces engaging in civil conflict. AQAP will also resume attacks in Hadramawt’s coastal cities. AQAP will expand its support zones in the interior of two other southern governorates, Shabwah and Abyan, as STC-aligned Yemeni counterterrorism forces are drawn into the fight for control of southern Yemen. (Updated September 24, 2019)