Conflict between southern Yemeni factions and forces loyal to the internationally recognized Yemeni government has fractured the anti-al Houthi coalition and exposed the division between Saudi and Emirati interests in Yemen. Fighting broke out in southern Yemen when the Transitional Political Council for the South (STC), a UAE-backed southern secessionist group, seized Aden — the de facto capital — on August 10. This takeover aimed to unseat the Yemeni government from southern Yemen. Members of the Yemeni government have a closer relationship with Saudi Arabia. STC-aligned security forces that had been backed by the UAE have since attempted to seize bases and population centers in Abyan governorate, east of Aden, and Shabwah governorate, which borders Abyan. The UAE conducted airstrikes against Yemeni military forces near Aden on August 29. The UAE’s coalition partner Saudi Arabia deployed additional forces to Shabwah governorate to support the government on September 1.

Prolonged conflict in southern Yemen makes a resurgence of AQAP increasingly likely. President Abdu Rabbu Mansour Hadi’s government has refused to negotiate with the STC, which *demands separation from the Yemeni state. The involvement of Yemeni security forces that had been participating in counterterrorism operations lifts pressure from AQAP. AQAP *surged attacks on UAE-backed forces in Abyan governorate and *seized a district in Abyan. Separately, AQAP simultaneously escalated its yearlong campaign against the Islamic State in Yemen in al Bayda governorate north of Abyan.

The fighting in the south has drawn forces away from the conflict against the Iranian-backed al Houthi movement. Some STC-aligned forces redeployed from the front line against the al Houthis near al Hudaydah port city on the Red Sea coast to Aden. Such redeployments risk the al Houthis recapturing the Red Sea coastline, from which they have previously attacked maritime vessels and threatened the security of the Bab al Mandab Strait.

For more on the al Houthi movement, see the August 28 Yemen File.

AQAP and the Islamic State in Yemen

At a Glance: the Yemen Conflict

The conflict in Yemen significantly challenges US efforts to combat al Qaeda and Iranian influence in the Middle East. Iran has expanded its influence in the Arabian Peninsula over the Yemeni civil war. The Iranian-backed al Houthi movement threatens Red Sea security and asymmetrically threatens US Gulf state partners. AQAP, which had been al Qaeda’s most virulent affiliate, retains its sanctuaries in southern Yemen despite ongoing counterterrorism operations. The underlying conditions that AQAP exploited to strengthen remain, and the group could reconstitute as Yemen fragments. Other Salafi-jihadi groups, including the Islamic State, are also present in Yemen. US Gulf partners, especially Saudi Arabia and the UAE, have become entangled in the Yemeni civil war, now a regional conflict. Near-famine conditions in Yemen are driving the world’s worst humanitarian crisis, which could further destabilize the region.

Yemen has fragmented. Hadi’s government is weak with most of its influence limited to two governorates in northern Yemen. Multiple Yemeni factions, many of which have security forces backed by the UAE or Saudi Arabia, seek to secure their own interests even as they remain nominally aligned against the al Houthi movement. Few of the security forces in Yemen respond to the Hadi government directly. Southern Yemenis remain divided but are increasingly calling for greater autonomy from the government. A southern secessionist group seized Yemen’s de facto capital, Aden, from the Hadi government in August and is attempting to expand its influence across the south. The al Houthi movement controls most of northern and central Yemen, including the capital, Sana’a, after seizing power in September 2014.

A political resolution to the Yemen conflict is unlikely. The conflict is stalemated. The UN effort is not viable and has empowered the al Houthis. The Stockholm Agreement, signed by the Hadi government and al Houthis in December 2018, demilitarizes three Red Sea ports should it be implemented. The UN intended Stockholm as a confidence-building measure for further negotiations, but the effect was preserving al Houthi control of al Hudaydah port. The al Houthis are waging a campaign of attacks against Saudi Arabia to compel Riyadh to accept a ceasefire that would secure al Houthi interests. The UAE, a key contributor to the Saudi-led coalition, redeployed most of its forces from the anti-al Houthi front by in June 2019.

AQAP and the Islamic State in Yemen

AQAP conducted counteroffensives in southern and eastern Yemen in June. The group has attacked security forces in *Hadramawt, *al Bayda, and Abyan governorates. It also capitalized on the security forces in Abyan being drawn into the conflict between the STC and Hadi government by seizing a *district in eastern Abyan governorate on September 8. Separately, conflict between AQAP and Islamic State militants in al Bayda continued, with increased clashes and accompanying rhetoric in the beginning of September. (As of September 10, 2019)

AQAP began a counteroffensive in southern Yemen in June and is capitalizing on the conflict between the STC and Hadi government. AQAP resumed attacks against Yemeni counterterrorism forces in June after nearly four months. UAE-backed *counterterrorism operations in the spring may have temporarily disrupted the group’s operations. AQAP attacked Shabwani Elite Forces in al Bayda in June in what was likely an attempt to exploit local tribes’ hostility to newly *deployed units from a neighboring governorate. AQAP then increased it attacks on UAE-backed al Hizam Security Forces in Abyan governorate in August after those forces suffered a major al Houthi attack. (See Figure 1.)  Some al Hizam units have since left their bases for Aden, which likely allowed AQAP to *seize al Wuday district in Abyan on September 8.

Forecast: AQAP will expand its presence in Abyan and Shabwah governorates over the next six months. AQAP will not seize larger population centers such as governorate capitals, however, because STC-aligned and Hadi government–aligned forces will prioritize holding those cities during the conflict in southern Yemen. (As of September 10, 2019) 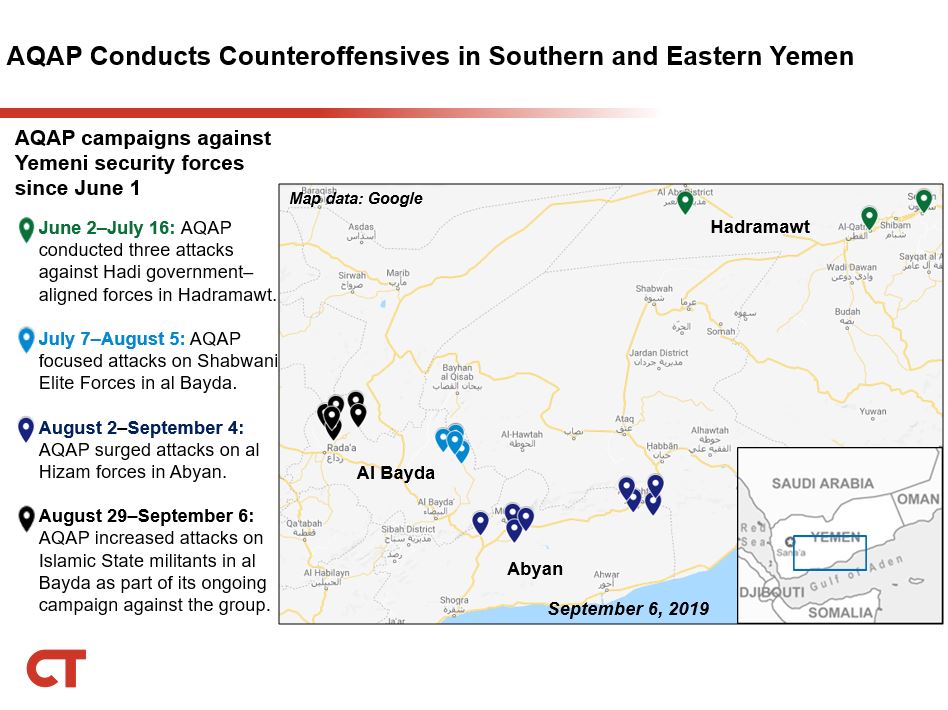 AQAP surged attacks within its yearlong campaign against the Islamic State in Yemen in September. The Islamic State seeks to lead the Salafi-jihadi movement in Yemen but lacks the resources or popular support to challenge AQAP. AQAP claimed 15 attacks on the Islamic State in Yemen in the Qayfa area of northern al Bayda governorate in the first week of September, which is AQAP’s highest rate of attacks against the group since April. Fighting between the groups intensified between February and May before subsiding for three months. Both groups are attempting to win the support of al Bayda tribes by painting the other as an agent of the Hadi government or al Houthi movement.

Forecast:  AQAP will reduce the Islamic State’s presence in al Bayda over the next six months. This conflict will not reduce AQAP’s ability to attack other targets in Yemen. The Islamic State in Yemen, which has more limited resources, will not conduct other territorial campaigns. It will, however, conduct intermittent assassinations and bombings and occasional spectacular attacks in Aden. (As of September 10, 2019)

Divergent Emirati and Saudi interests in Yemen hinder efforts to negotiate a resolution to the conflict in southern Yemen. Both countries support the Hadi government but have different visions of its composition. The UAE seeks to reduce the influence of the Islamist al Islah party in the Hadi government. The UAE may also seek to preserve its influence in Yemen through its patronage to the STC. (As of September 10, 2019)

The UAE and Saudi Arabia are increasing their military involvement in the conflict in southern Yemen. The UAE conducted air strikes against anti-STC militias in Aden on August 29. The UAE *claimed the air strikes targeted “terrorists” — likely a reference to al Islah–aligned militias — attacking Saudi-led coalition positions. The UAE also delivered armored vehicles to STC-aligned forces in Aden on September 5. Saudi Arabia deployed additional forces to Ataq, the capital of Shabwah governorate, on September 1 to prevent STC-aligned forces from capturing the city. (See Figure 2.) 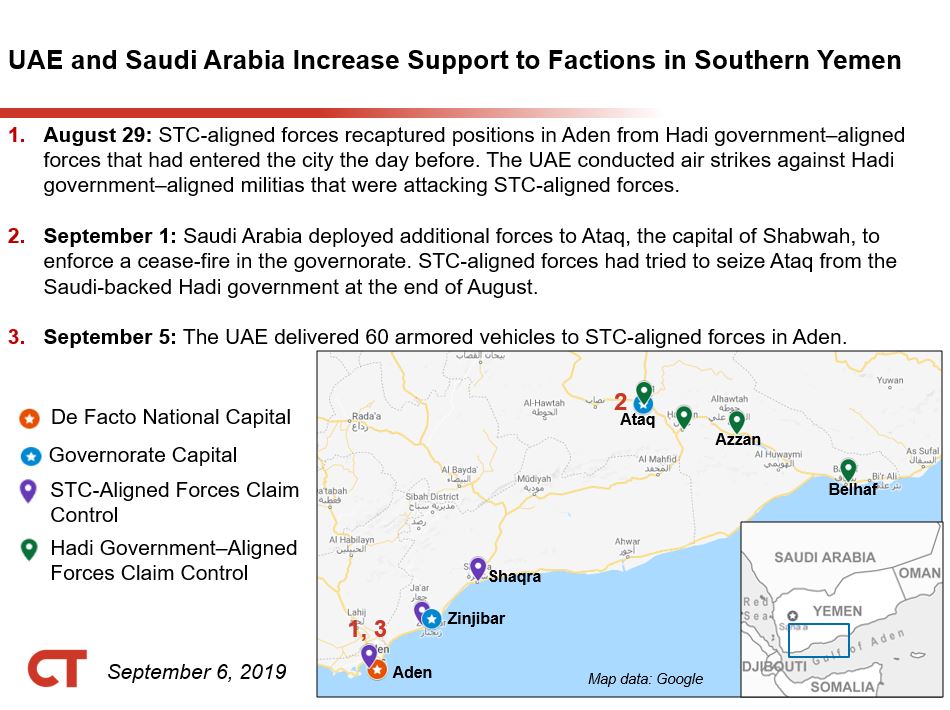 Forecast:  STC-aligned forces and Hadi government–aligned forces will resume fighting around Aden in the coming weeks. The UAE will not support offensives by STC-aligned forces, but it may conduct additional air strikes against Islahi forces if they threaten UAE-backed security forces. (As of September 10, 2019)

An Omani-backed militia leader formed a new political party to counter Saudi and STC influence in eastern Yemen. The UAE, Saudi Arabia, and Oman are competing for influence in Yemen’s eastern-most governorate, al Mahrah, which has remained relatively stable throughout the civil war. Sheikh Ali Saleh al Huraizi *announced the formation of an anti-STC party on September 3 in response to the STC’s seizure of Aden, which he blamed on the UAE. Huraizi has also organized protests against al Mahrah’s Saudi-backed governor.

The US has reportedly begun talks with the al Houthi movement focused on ending the war in Yemen. The al Houthi movement did not confirm or deny the talks, but an al Houthi official claimed that the announced talks by a US official was a victory for the group. The Wall Street Journal reported on August 27 that US Ambassador to Yemen Christopher Henzel would lead talks with the al Houthis in Oman. US Secretary of State Michael Pompeo and Secretary of Defense Mark Esper separately met with Saudi Vice Minister of Defense Khaled bin Salman in late August and discussed resolving the Yemen conflict.

For more on US policy in Yemen, see Katherine Zimmerman's testimony "Taking the Lead Back in Yemen."

A UN Human Rights Council report stated that the US, UK, France, and Iran may be complicit in war crimes in Yemen. Investigators found that all parties to the Yemen conflict had perpetrated probable war crimes, stating that France, Iran, the UK, and the US may be complicit in al Houthi– and Saudi-led coalition crimes, respectively. Saudi-led coalition air strikes that reportedly killed more than 100 prisoners on September 3 prompted a renewed outcry from the UN. A group of US representatives are renewing their push to curtail US support for the Saudi-led coalition.