The Iranian regime is attempting to leverage the Yemen cease-fire talks to advance its effort to split the Gulf States from the US and consolidate the influence of its al Houthi partners in Yemen. Iranian Supreme Leader Ayatollah Ali Khamenei and President Hassan Rouhani *endorsed a *cease-fire in Yemen on October 13. Iran is simultaneously *encouraging direct Iran-Saudi talks to convince Riyadh that Iran—not the US—is the only country that can guarantee regional security. Tehran will insert itself into any Yemen cease-fire negotiations and attempt to convince the Saudis that a broader Iran-Saudi agreement is the only way to end al Houthi cross-border attacks. [For more on Iran’s efforts to divide the US and its Gulf partners, read the October 7 Iran File.]

There are several potential outcomes to Saudi–al Houthi negotiations. A lasting cease-fire could help Iran split Saudi Arabia from the US’s maximum pressure campaign if Riyadh fears resumed al Houthi cross-border attacks as a result of its support for the campaign. The al Houthis will retain the military capabilities that Iran has provided in the case of a cease-fire. A cease-fire could give the al Houthis the space and resources to develop governance in areas they control, thus securing al Houthi, and by extension Iranian, influence in Yemen. Alternatively, negotiations could break down, prolonging the military stalemate in Yemen and causing a resumption of al Houthi attacks in Saudi Arabia. In either case, the al Houthi movement could fracture over disagreements about the group’s relationship with Tehran or *historical political differences in the movement.

Saudi Arabia is separately brokering an agreement to end a conflict in southern Yemen between southern secessionists and the internationally recognized government. The draft agreement postpones resolving the issue of southern secession, ensuring it remains a flashpoint. The agreement’s stipulations for greater southern representation in government will likely prompt backlash from powerful northern constituencies.

The conflict in Yemen significantly challenges US efforts to combat al Qaeda and Iranian influence. Iran has expanded its influence in the Arabian Peninsula during the Yemeni civil war. The Iranian-backed al Houthi movement threatens Red Sea maritime security and the security of US Gulf state partners, providing Iran with plausible deniability for Iran’s destabilizing regional activities. Al Qaeda in the Arabian Peninsula (AQAP), which had been al Qaeda’s most virulent affiliate, retains sanctuaries in southern Yemen despite ongoing counterterrorism operations. The underlying conditions that AQAP exploited to strengthen remain, and the group could reconstitute as Yemen fragments. Other Salafi-jihadi groups, including the Islamic State, are also present in Yemen. US Gulf partners, especially Saudi Arabia and the UAE, have become entangled in the Yemeni civil war, which is now a regional conflict. Near-famine conditions in Yemen are driving the world’s worst humanitarian crisis, which could further destabilize the region.

Yemen has fragmented. President Hadi’s government is weak with most of its influence limited to two governorates in northern Yemen. Multiple Yemeni factions, many of which benefit from Emirati or Saudi military assistance, pursue their own interests as part of an anti–al Houthi coalition. Few Yemeni security forces respond to the Hadi government directly. Southern Yemenis remain divided over the question of secession and distribution of political power but are increasingly calling for greater autonomy from the government. A southern secessionist group seized Yemen’s de facto capital, Aden, from the Hadi government in August and is attempting to expand its influence across the south. The al Houthi movement controls most of northern and central Yemen, including the capital, Sana’a, after seizing power in September 2014.

The al Houthi movement has increasingly aligned with Tehran since the start of the current conflict, but this alignment is likely not uniform across al Houthi leadership. Statements since the September 2019 attack on Saudi oil facilities in Abqaiq indicate that some al Houthi officials are skeptical of participating in Iran’s regional activities.

Saudi Arabia and the al Houthi movement began back-channel talks after the September 2019 Abqaiq attack. The drawdown of Saudi Arabia’s coalition partner, the UAE, by June 2019 and the growing risk of a direct confrontation with Iran are likely influencing Saudi Arabia’s efforts to seek a cease-fire. A lasting cease-fire would allow the al Houthis to focus more resources on the fight in Yemen and consolidating their gains in the country’s northern and central governorates.

Saudi Arabia conceded to some al Houthi demands and Saudi Arabia seeks a cease-fire to save face and hopes an agreement will enable the al Houthi movement to distance itself from Tehran. Riyadh is considering limiting its air campaign and lifting a blockade of al Houthi–controlled territories in return for an end to cross-border attacks. The Saudi-led coalition has halted air strikes against major al Houthi–held cities since the beginning of October. The Saudi-led coalition also *allowed several oil shipments to the al Houthi–controlled al Hudaydah port in mid-October.

Iran also supports a cease-fire in Yemen and will attempt to shape Saudi–al Houthi negotiations to secure its strategic objectives. Iranian President Rouhani *spoke favorably of a cease-fire in Yemen during an October 13 meeting with Pakistani Prime Minister Imran Khan, who is mediating between Riyadh and Tehran. The same day, Supreme Leader Khamenei publicly discussed the Yemeni civil war in unusual depth and *urged the international community to adopt an Iranian plan for resolving the war that Foreign Minister Javad Zarif has pushed since 2015. (See Figure 1.) Tehran may see a cease-fire as a means to compel Riyadh to distance itself from the US maximum pressure campaign to avoid inciting the resumption of al Houthi cross-border attacks. Iran also seeks to consolidate its influence in Yemen through a cease-fire and eventually a political settlement that secures al Houthi gains. [For more on Iran’s efforts to divide the US and its Gulf partners, read the October 7 Iran File.] 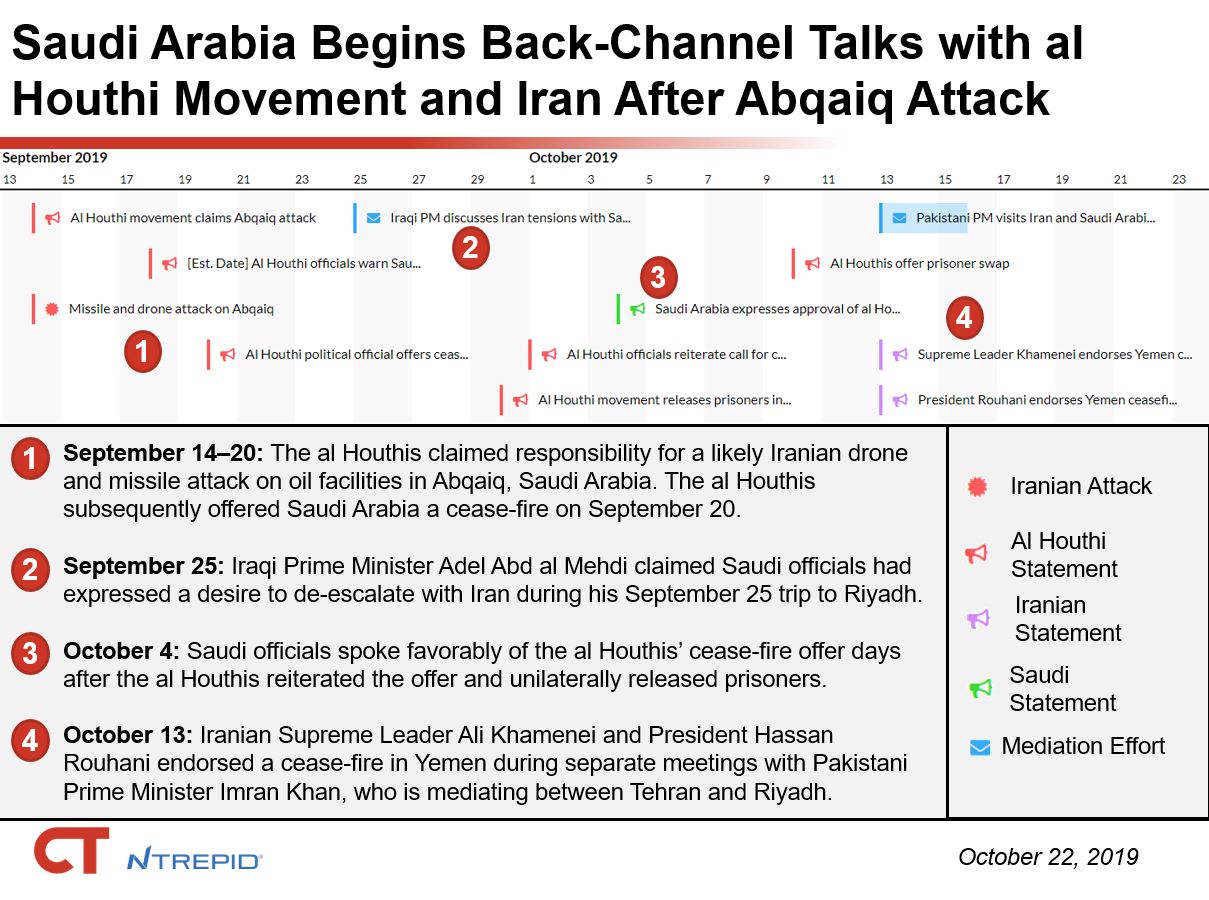 The al Houthi movement may fracture along political fault lines. The Sana’a-based wing of the General People’s Congress (GPC) *boycotted al Houthi institutions on October 20 after the al Houthis *released suspects linked to a 2011 assassination attempt against the late Yemeni President Ali Abdullah Saleh. Al Houthi officials have attempted to bring the GPC back into the fold by *claiming that the prisoner release was a mistake, but Sana’a-based GPC officials continue to criticize the al Houthis.

An early October breakthrough in negotiations brokered by Saudi Arabia between southern secessionists and President Hadi’s government may temporarily end the crisis in southern Yemen. The August 10 seizure of Yemen’s de facto capital, Aden, by the Transitional Political Council for the South (STC), a southern Yemeni secessionist group, set the conditions for the expansion of Yemen’s civil war as fighting spread from Aden into neighboring Abyan and Shabwah governorates. The STC sought to unseat the Hadi government from southern Yemen. The STC did not secede at this point but called for the resignation of most of President Hadi’s cabinet, particularly members of the Islamist al Islah party. Saudi Arabia is brokering negotiations in Jeddah to end the conflict in southern Yemen before publicly responding to the al Houthi movement’s cease-fire offer.

Saudi Arabia is close to brokering a deal that would give the STC significant influence in the Hadi government and increase Saudi military presence in southern Yemen. The draft agreement under negotiation postpones resolving the southern issue until after the conflict with the al Houthis ends. It also calls for equal north-south representation in government ministries and for Saudi forces to oversee local security forces in Aden. Saudi forces took control of key facilities in Aden in early October, likely as part of the agreement, and *reinforced positions in Shabwah, another southern governorate and a hot spot of recent clashes, on October 9. Two of President Hadi’s ministers who fled Aden in August *returned to Yemen from Saudi Arabia on October 19, possibly indicating that the Hadi government is preparing to return to Aden. (See Figure 2.) 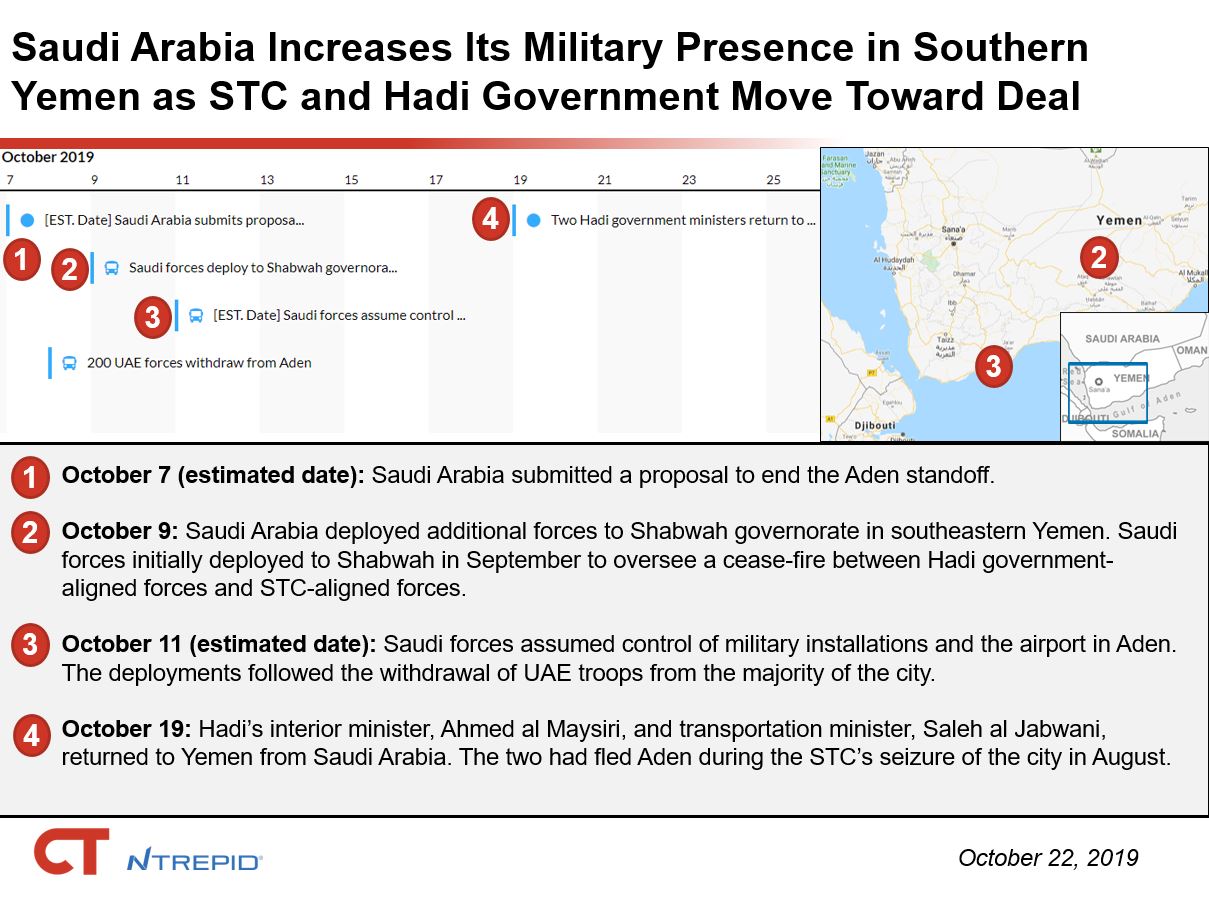 Forecast: The STC and Hadi government will accept the Saudi proposal. The STC will use its influence in the government to strengthen, especially in the security forces, creating the conditions for a future STC military victory. The STC will resume military operations against the Hadi government in the next year either to gain more power in the government or to declare secession. The STC’s inclusion in the Hadi government will alienate members of the Islamist al Islah party and forces loyal to Vice President Ali Mohsen al Ahmar, exacerbating a low-intensity conflict between al Islahi and STC-aligned forces in southern Yemen. (Updated October 22, 2019)