Conflict between southern Yemeni factions and forces loyal to the internationally recognized Yemeni government has fractured the anti–al Houthi coalition and exposed the division between Saudi and Emirati interests in Yemen. The al Houthi movement, which benefits from the infighting, has continued to take on the vestiges of a state and drawn closer to Iran. The Trump administration has reengaged diplomatically, with US cabinet officials meeting with Saudi officials, and announced plans for talks with the al Houthis.

Fighting broke out in southern Yemen when the Transitional Political Council for the South (STC), a UAE-backed southern secessionist group, seized Aden — the de facto capital — on August 10. Security forces that had been backed by the UAE have since attempted to seize military bases and population centers in two other governorates for the STC. Yemeni military forces and Yemeni government officials have closer relationships with Saudi Arabia. Riyadh and Abu Dhabi established a joint committee to negotiate a resolution to the conflict.

The stage is set for prolonged conflict in southern Yemen. The STC *demands separation from the Yemeni state, which President Abdu Rabbu Mansour Hadi’s government is unlikely to accept. Nor will the government engage in talks until the STC stands down. The fighting has already distracted from efforts to combat the al Houthi movement. Yemeni security forces that had been involved in counterterrorism operations will likely be drawn into the conflict, lifting pressure from al Qaeda in the Arabian Peninsula (AQAP).

The al Houthi movement is increasingly posturing as a state actor, recognized as such by the Iranian regime. Iran accepted the credentials of a newly appointed ambassador to Iran from the al Houthi–run government. Iranian Supreme Leader Ayatollah Ali Khamenei also hosted an al Houthi delegation on August 13, an honor reserved for Iran’s closest partners. The al Houthi leader separately framed a renewed campaign of drone and missile attacks targeting Saudi infrastructure as deterrence, indicating al Houthi pressure on Riyadh to accept some sort of détente.

At a Glance: the Yemen Conflict

The conflict in Yemen poses a significant challenge to US efforts to combat al Qaeda as well as Iranian influence in the Middle East. Iran has expanded its influence in the Arabian Peninsula over the course of the Yemeni civil war. The Iranian-backed al Houthi movement threatens Red Sea security and asymmetrically threatens US Gulf state partners. AQAP, which had been al Qaeda’s most virulent affiliate, retains its sanctuaries in southern Yemen despite ongoing counterterrorism operations. The underlying conditions that AQAP exploited to strengthen remain, and the group could reconstitute as Yemen fragments. Other Salafi-jihadi groups, including the Islamic State, are also present in Yemen. US Gulf partners, especially Saudi Arabia and the UAE, have become entangled in the Yemeni civil war, now a regional conflict. Near-famine conditions in Yemen are driving the world’s worst humanitarian crisis, which could further destabilize the region.

Yemen has fragmented. Hadi’s government is weak with most of its influence limited to two governorates in northern Yemen. Multiple Yemeni factions, many of which have security forces backed by the UAE or Saudi Arabia, seek to secure their own interests even as they remain nominally aligned against the al Houthi movement. Few of the security forces in Yemen respond to the Hadi government directly. Southern Yemenis remain divided but are increasingly calling for greater autonomy from the government. A southern secessionist group seized Yemen’s de facto capital, Aden, from the Hadi government in August and is attempting to expand its influence across the south. The al Houthi movement controls most of northern and central Yemen, including the capital, Sana’a, after seizing power in September 2014.

A political resolution to the Yemen conflict is unlikely. The conflict is stalemated. The UN effort is not viable and has empowered the al Houthis. The Stockholm Agreement, signed by the Hadi government and al Houthis in December 2018, demilitarizes three Red Sea ports should it be implemented. The UN intended Stockholm as a confidence-building measure for further negotiations, but the effect was preserving al Houthi control of al Hudaydah port. The al Houthis are waging a campaign of attacks against Saudi Arabia to compel Riyadh to accept a cease-fire that would secure al Houthi interests. The UAE, a key contributor to the Saudi-led coalition, redeployed most of its forces from the anti–al Houthi front by in June 2019.

The August 10 seizure of Yemen’s de facto capital, Aden, by the Transitional Political Council for the South (STC), a southern Yemeni secessionist group, set the conditions for the expansion of Yemen’s civil war. Fighting spread from Aden into neighboring Abyan and Shabwah governorates in mid-August. Saudi Arabia and the UAE have brokered a temporary cease-fire in Abyan and Shabwah and the Hadi government is attempting to recapture Aden. Saudi efforts to broker a settlement are stalled, however.

Fighting between the Hadi government, backed by Saudi Arabia, and the UAE-backed STC exacerbates rifts within the anti-al Houthi coalition and destabilizes southern Yemen. The STC does not represent all southern Yemenis. It relies on the support of various southern security forces that act in their own interests. The STC faces opposition from *some southern factions in addition to the Hadi government. Some of these *factions are Yemeni security forces that had been conducting counterterrorism operations against al Qaeda in the Arabian Peninsula (AQAP). *Other units that are *fighting the al Houthis along the Red Sea coast have a stake in the conflict in southern Yemen and might redeploy to southern governorates. Such a move would leave the al Houthi movement better positioned to attack international shipping around the Bab al Mandab Strait. (As of August 28, 2019)

The STC has lost momentum after failing to oust Yemeni military forces aligned with the Hadi government from Shabwah governorate. Yemeni military forces, possibly with *Saudi military *support, prevented STC-aligned forces from seizing Ataq, Shabwah’s capital, between August 20 and August 23. Yemeni military forces subsequently occupied *multiple bases belonging to STC-aligned and UAE-backed Shabwani Elite units across Shabwah, including in the governorate’s second-largest city and an industrial port. Three Shabwani Elite brigades *pledged support to the Hadi government when they handed over their bases. These forces are probably hedging but could reenter the STC’s fold if the group accrues more resources or influence. The Hadi government separately claimed to recapture the capital of Abyan and enter parts of Aden on August 28. 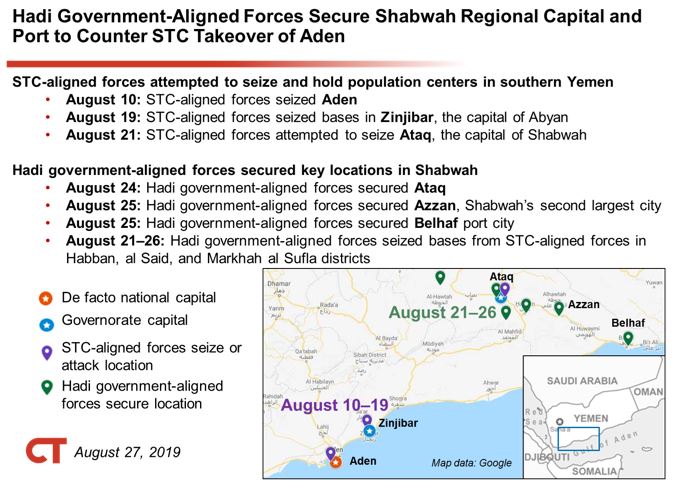 Saudi Arabia and the UAE are brokering a cease-fire between the Hadi government and southern Yemeni parties, but neither the Hadi government nor STC have agreed to direct negotiations.  Saudi Arabia and the UAE established a joint committee to oversee a cease-fire in Shabwah and Abyan governorates on August 26. Saudi officials have attempted but failed to hold negotiations between the STC and Hadi government in Jeddah, Saudi Arabia. Saudi Deputy Foreign Minister Khaled bin Salman *met with STC President Aydarus al Zubaidi in Jeddah on August 21, but Hadi government officials refused to attend the meeting. Both sides have issued demands that the other is unlikely to accept. The Hadi government preconditioned talks on the STC’s withdrawal from captured military positions and Aden’s port. The STC has *demanded the resignation of President Hadi’s cabinet and the expulsion of “northern” military forces from the south. Riyadh has close ties to the Hadi government, while Abu Dhabi backs the STC, which will make it difficult them to reach a unified position.

The al Houthi movement is increasingly taking on the characteristics of a state actor in its regional engagements. The al Houthi government in Yemen’s capital, Sana’a, controls Yemeni state institutions and recently named an ambassador to Iran. Al Houthi leader Abdul Malik al Houthi has also framed a campaign of drone attacks against Saudi Arabia as deterrence, indicating a desire to compel Riyadh into some version of a cease-fire with the al Houthi movement. The drone campaign also coincided with an Iranian escalation in the region against the US and its partners. The al Houthi movement retains independent decision-making from Iran, which has provided it with multiple forms of support, including strategic weapons, advisers, favorable *media coverage, and *funding. (As of August 28, 2019)

The al Houthi leader framed a drone attack against Saudi Arabia as an act of deterrence as part of the group’s effort to compel Saudi Arabia to end anti-al Houthi military operations. The al Houthi movement claimed to attack ARAMCO’s Shaybah oilfield in eastern Saudi Arabia on the Emirati border with 10 drones on August 17. Saudi officials confirmed the attack, which demonstrated an al Houthi weapons range of 800 miles and was the second-farthest al Houthi drone strike ever. Abdul Malik al Houthi described the attack in his August 17 speech as the “largest attack” in the movement’s history and framed it as an act of deterrence. The al Houthi movement subsequently claimed to attack a military target near Riyadh with multiple drones on August 26, but the Saudi-led coalition *claimed to intercept the drones in Yemen. These attacks are intended to break Saudi Arabia’s will to sustain its military intervention in Yemen.

The Trump administration is reengaging diplomatically in resolving the Yemen crisis. US Secretary of State Michael Pompeo met with Saudi Deputy Defense Minister Khaled bin Salman in Washington on August 28 to discuss the recent clashes in Aden and Iran’s destabilizing activities in the Middle East. US Secretary of Defense Mark Esper also met with Khaled bin Salman on August 29. The Trump administration plans for US Ambassador to Yemen Christopher Henzel to lead direct talks with representatives of the al Houthi movement in Oman, according to a Wall Street Journal report.