The al Houthi movement conducted an information operation directed at Saudi Arabia following a major Iranian attack on the Kingdom. Immediately after reports of an attack on the oil facilities in Abqaiq, Saudi Arabia, al Houthi media outlets released *claims of responsibility and statements from al Houthi officials. The al Houthis did not conduct the Abqaiq attack itself and have also falsely claimed responsibility for a May drone attack on a Saudi pipeline conducted by Iranian-backed Iraqi militants. The al Houthi military spokesman also claimed what would have been the al Houthis’ largest cross-border attack on Saudi forces, including capturing over 2,000 Saudi personnel, in late September. The al Houthis have produced no evidence of such an attack. Al Houthi–released footage is likely from operations in northern Yemen in late August.

The al Houthi information operation might be part of an Iranian-directed effort to weaken Saudi Arabia further. It could also be an al Houthi–generated effort to pressure Saudi Arabia to accept a détente since the Kingdom seeks to wind down the war in Yemen. Additionally, the information operation could be an attempt by al Houthi leaders to consolidate power against rival domestic factions in northern Yemen.

The conflict in Yemen significantly challenges US efforts to combat al Qaeda and Iranian influence in the Middle East. Iran has expanded its influence in the Arabian Peninsula over the Yemeni civil war. The Iranian-backed al Houthi movement threatens Red Sea security and asymmetrically threatens US Gulf state partners, helping Iran maintain a degree of plausible deniability for its destabilizing regional activities. Al Qaeda in the Arabian Peninsula (AQAP), which had been al Qaeda’s most virulent affiliate, retains its sanctuaries in southern Yemen despite ongoing counterterrorism operations. The underlying conditions that AQAP exploited to strengthen remain, and the group could reconstitute as Yemen fragments. Other Salafi-jihadi groups, including the Islamic State, are also present in Yemen. US Gulf partners, especially Saudi Arabia and the UAE, have become entangled in the Yemeni civil war, now a regional conflict. Near-famine conditions in Yemen are driving the world’s worst humanitarian crisis, which could further destabilize the region.

Yemen has fragmented. President Abdu Rabbu Mansour Hadi’s government is weak with most of its influence limited to two governorates in northern Yemen. Multiple Yemeni factions, many of which have security forces backed by the UAE or Saudi Arabia, seek to secure their own interests even as they remain nominally aligned against the al Houthi movement. Few of the security forces in Yemen respond to the Hadi government directly. Southern Yemenis remain divided but are increasingly calling for greater autonomy from the government. A southern secessionist group seized Yemen’s de facto capital, Aden, from the Hadi government in August and is attempting to expand its influence across the south. The al Houthi movement controls most of northern and central Yemen, including the capital, Sana’a, after seizing power in September 2014.

The al Houthi movement has grown closer to Tehran since the start of the current conflict, but this alignment is likely not uniform across al Houthi leadership. Statements since the September 2019 attack on a Saudi oil facility indicate that some al Houthi officials are skeptical of participating in Iran’s regional activities.

The al Houthi movement has supported Iran’s regional escalation campaign by increasing its pace of attacks against Saudi Arabia since May. Iran facilitates these attacks by furnishing the al Houthis with missiles and drones. The attacks serve Iranian interests by punishing Saudi Arabia for the American “maximum pressure” campaign while absolving Tehran of overt responsibility. The al Houthis falsely *claimed responsibility for an Iranian attack on Saudi oil facilities at Abqaiq on September 14 that temporarily *halved the Kingdom’s production.

The al Houthi movement claimed a major offensive in southern Saudi Arabia on September 28 but has yet to produce evidence of such an attack. Al Houthi military spokesman Yahya Sare’a announced Operation Victory from God on September 28 and claimed the capturing of three Saudi brigades, totaling over 2,000 soldiers. However, his statements on the offensive’s timing are inconsistent. Al Houthi media outlets have not released evidence for a cross-border offensive in September, much less one of this scale. Pictures and videos the al Houthis released purporting to show Saudi prisoners of war likely were taken at other locations and times, possibly in late August when the al Houthis captured hundreds of Saudi-led coalition-backed Yemeni forces in northern Yemen. Saudi Arabia and President Hadi’s government have *denied the al Houthi claims.

Several possible reasons for elements of the al Houthi movement to create the impression of a major attack on Saudi Arabia exist. 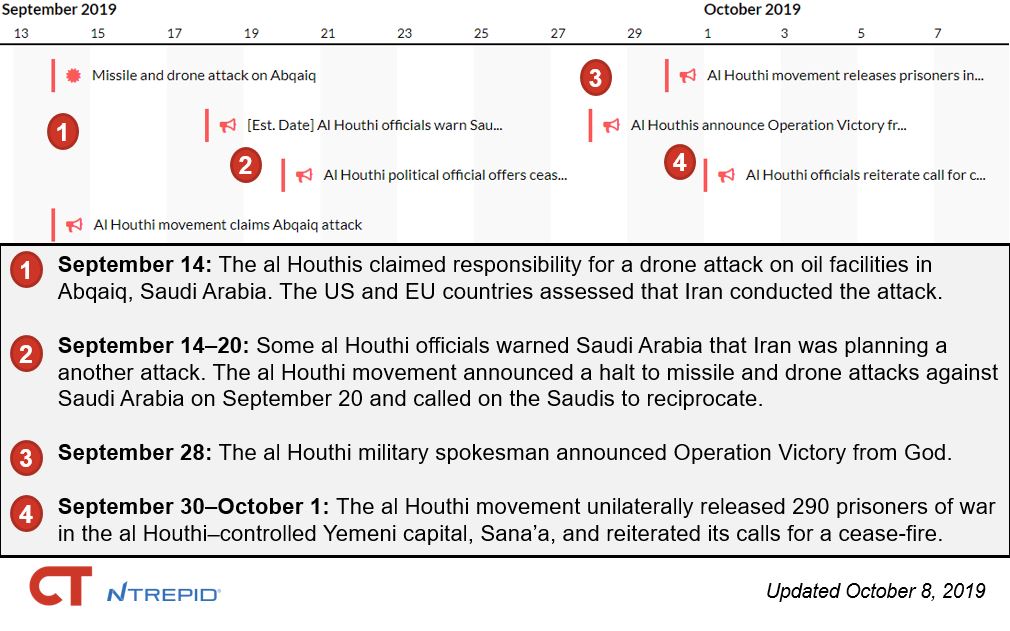 Forecast: Saudi Arabia and the al Houthi movement will agree to a partial cease-fire in Yemen in the next month. (Updated October 8, 2019)

A breakthrough in negotiations brokered by Saudi Arabia between southern secessionists and President Hadi’s government may end the crisis in southern Yemen. The August 10 seizure of Yemen’s de facto capital, Aden, by the Transitional Political Council for the South (STC), a southern Yemeni secessionist group, set the conditions for the expansion of Yemen’s civil war as fighting spread from Aden into neighboring Abyan and Shabwah governorates. The STC sought to unseat the Hadi government from southern Yemen. The STC did not secede at this point but called for the resignation of most of President Hadi’s cabinet, particularly members of the Islamist al Islah party. Saudi Arabia has attempted to broker negotiations in Jeddah. STC-aligned counterterrorism forces in southern Yemen have shifted their focus from combating AQAP to fighting Hadi government–aligned forces. AQAP capitalized on this shift by *seizing a district in Abyan in September.

The STC and Hadi government may be close to reaching a deal. Saudi Arabia recently *proposed that the Hadi government include the STC in its ministries and that Saudi forces deploy to Aden to oversee a neutral security force. Officials from an STC-aligned security force stated on October 7 that an agreement could be signed in a few days. Saudi Arabia seeks to end the conflict in southern Yemen before officially responding to the al Houthi movement’s cease-fire offer.

Forecast: The STC and Hadi government will accept the Saudi proposal. The STC will use its influence in the government to strengthen, especially in the security forces, creating the conditions for the group to secure a military victory in a future conflict. The STC will resume military operations against the Hadi government in the next year either to gain more power in the government or to declare secession. The STC’s inclusion in the Hadi government will spark backlash from members of the Islamist al Islah party, exacerbating a low-intensity conflict between al Islahi and STC-aligned forces in southern Yemen. (Updated October 8, 2019)