The Yemeni civil war may escalate in the near term even as limited diplomatic progress sets conditions for a potential political resolution to the conflict. The al Houthi movement and Saudi Arabia are engaged in cease-fire negotiations facilitated by Oman. Saudi Arabia also brokered a deal between President Abdu Rabbu Mansour Hadi’s government and the Transitional Political Council for the South (STC), a UAE-backed southern separatist group, to stave off the complete fracturing of the anti–al Houthi coalition by including the STC in future UN-brokered talks with the al Houthis. Hadi government and STC officials have postured for a potential offensive against the al Houthis since the signing of this deal, which has also allowed Hadi government ministers to begin returning to Aden.

The al Houthis have escalated attacks inside Yemen in recent months, signaling an effort to disrupt anti–al Houthi military capabilities and possibly deter an offensive. The temporary al Houthi seizure of South Korean and Saudi vessels in the Red Sea underscores the continued threat that the al Houthis pose to commercial maritime traffic.

A political resolution to the civil war does not address the local conditions that Salafi-jihadi groups exploit in Yemen. Local power conflicts, anti-government sentiments, and governance gaps will persist in the areas where al Qaeda in the Arabian Peninsula (AQAP) and the Islamic State in Yemen operate today even if a national cease-fire is achieved. 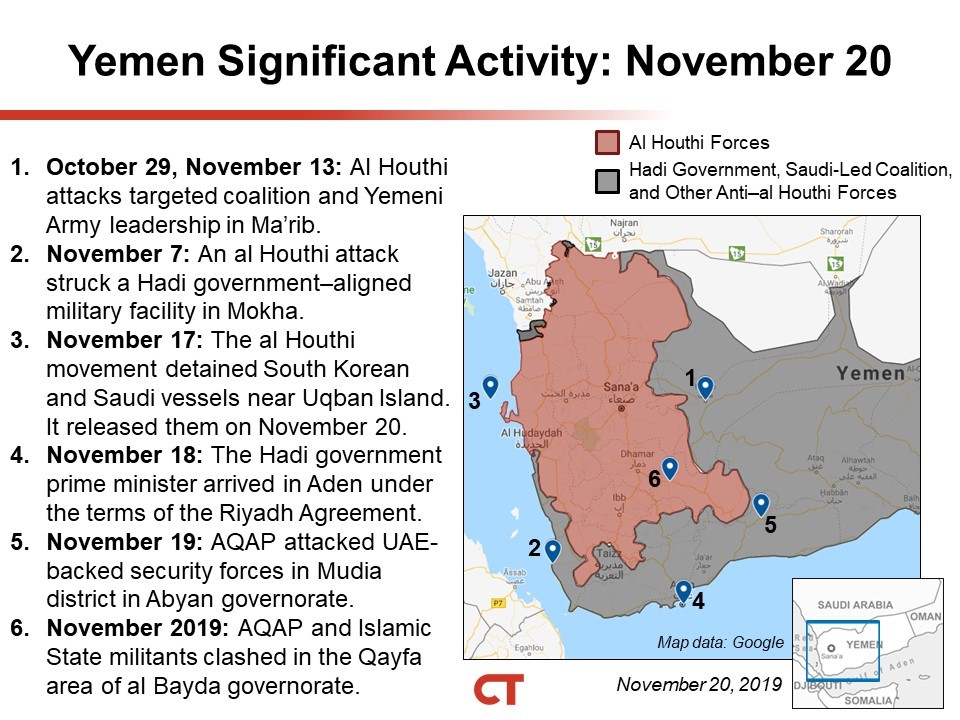 Yemen was always a fragile state and has fragmented over the course of this latest civil war. The internationally recognized government led by President Hadi is weak. Multiple Yemeni factions, many of which benefit from Emirati or Saudi military assistance, pursue their own interests as part of an anti–al Houthi coalition. Few Yemeni security forces respond to the Hadi government directly. The al Houthi movement controls most of northern and central Yemen, including the capital, Sana’a, after seizing power in September 2014. The movement has increasingly aligned with Tehran since the start of the current conflict, but this alignment is likely not uniform across al Houthi leadership.

Small diplomatic victories might yield momentum toward a negotiated end to Yemen’s civil war. Saudi Arabia and the al Houthi movement are engaging in cease-fire negotiations. The two sides began talks after the al Houthis claimed an Iranian attack on Saudi oil facilities in September 2019. The drawdown of Saudi Arabia’s coalition partner, the UAE, by June 2019 and the growing risk of a direct confrontation with Iran will likely influence Saudi Arabia’s efforts to seek a cease-fire.

Saudi Arabia separately brokered a power-sharing agreement between the internationally recognized Yemeni government and a southern opposition faction—the Transitional Political Council for the South (STC)—that was signed on November 5. The agreement upgraded the STC from observer to participant status in future UN-brokered talks with the al Houthis. This deal is a temporary solution that prevented a complete fracturing of the anti–al Houthi coalition in November 2019 but did not resolve key issues, such as the question of southern independence.

Any resolution to the civil war leaves significant challenges in Yemen, including to US interests. Iran expanded its influence in Yemen significantly over the past five years through its relationship with the al Houthi movement. The al Houthis now threaten Red Sea maritime security and Gulf state security in addition to supporting Iran’s destabilizing regional activities. Al Qaeda in the Arabian Peninsula (AQAP) retains its historical sanctuaries despite ongoing counterterrorism operations. AQAP, the Islamic State, and other Salafi-jihadi groups exploit local conditions unrelated to the war with the al Houthis to develop ties to local Yemeni communities. The war contributes to Yemen’s severe humanitarian crisis, which is one of the worst in the world.

Oman is facilitating in-person meetings between Saudi and al Houthi officials. Saudi Deputy Defense Minister Prince Khalid bin Salman traveled to Oman’s capital Muscat on November 18, indicating that talks may be advancing. The al Houthis have reduced cross-border attacks while negotiating a cease-fire. The group intensified efforts to persuade Saudi Arabia to enter negotiations in mid-September following an uptick in al Houthi cross-border attacks and falsely claimed attacks, including the Iranian attack on Saudi Arabia’s  Abqaiq oil facilities. The al Houthis seek the reopening of naval and air entry points to allow resources into northern Yemen, a key demand since the Saudi-led coalition began the blockade in 2015–16. A buffer zone on the Saudi-Yemeni border is also under discussion.

The Saudi-led coalition’s blockade of western Yemen contributes to a severe fuel shortage in Sana’a, Yemen’s capital, that with other service delivery failures risk cultivating local resistance to al Houthi control. A large al Houthi celebration marking the birthday of the Prophet Mohammed (Mawlid al Nabi) in early November caused *backlash on social media because of its cost.

An al Houthi drone and missile attack struck warehouses used by a Hadi government–aligned force in Mokha, in Taiz governorate on the Red Sea coast, on November 7. The attack damaged a hospital, forcing Doctors Without Borders to suspend its activities at the site.

The agreement postpones the southern issue to prioritize the war against the al Houthis. Hadi government and STC officials have emphasized this prioritization following the signing of the deal. Saudi Arabia has increased its military presence in southern Yemen to support the agreement, while the UAE withdrew its remaining forces from Aden in October.

For more on the Riyadh Agreement’s provisions, see the November 7 Yemen File.

The Hadi government began its return to Aden under the Riyadh Agreement. The agreement called for Hadi government ministers who had left Aden during the STC’s August takeover to *return by November 12. Hadi government Prime Minister Mu’ayyan Abdul Malik Sa’id arrived in Aden with five other ministers on November 18. The Yemeni Foreign Ministry *resumed work in Aden.

There are immediate challenges to the agreement’s implementation, however. STC supporters delayed the Hadi government’s return to Aden by refusing to cede control over the municipal headquarters and presidential palace.

Forecast: The Riyadh Agreement is unlikely to be fully implemented. The Hadi government and STC will maintain a fragile relationship so long as the war against the al Houthis continues. The STC will use its influence in the government to strengthen, especially in the security forces, during this time. North-south tensions and internal southern dynamics will cause renewed fracturing in southern Yemen after the civil war ends. (Updated November 20, 2019.)

Prolonged political instability and conflict in southern Yemen creates conditions for Salafi-jihadi groups to strengthen there in the long term. AQAP has waged low-level campaigns against Yemeni counterterrorism forces in multiple southern governorates in 2019, including counteroffensives in June, but remains significantly weakened by counterterrorism operations. AQAP’s main effort is fighting the Islamic State in Yemen in al Bayda governorate, but it also conducts intermittent attacks in Abyan governorate.