The Ukrainian counteroffensive is making verifiable progress in the south and the east. Ukrainian forces are advancing along several axes in western Kherson Oblast and have secured territory across the Siverskyi Donets River in Donetsk Oblast. The pace of the counteroffensive will likely change dramatically from day to day as Ukrainian forces work to starve the Russians of necessary supplies, disrupt their command and control, and weaken their morale even as counteroffensive ground assaults continue. The Russians will occasionally counterattack and regain some lost ground and will of course conduct likely fierce artillery and air attacks against liberated settlements and advancing Ukrainian troops. Ukrainian forces have made substantial enough progress to begin evoking more realistic commentary from the Russian milbloggers, who had been hewing very closely to the Kremlin’s optimistic rhetoric until today.

Geolocated footage from September 2-3 shows Russian forces firing MLRS rounds from positions on the grounds of the Zaporizhzhia Nuclear Power Plant (ZNPP) within 1km of a nuclear reactor.[4] Russian opposition outlet The Insider’s footage of Russian forces operating MLRS systems at the ZNPP reaffirms ISW’s prior assessment that Russian forces have militarized the ZNPP.[5] The International Atomic Energy Agency (IAEA) announced on September 3 that the ZNPP has been disconnected from the power grid for the second time in its operational history (the first instance occurred on August 25), likely due to continued Russian false flag attacks and other military activities in and around the ZNPP.[6] Russian sources claimed the ZNPP has stopped providing energy to Ukraine.[7]

Kremlin Spokesperson Dmitry Peskov stated that Russia is ready to negotiate Moscow’s conditions for ending the Russian war in Ukraine on September 4, but the Kremlin is maintaining its maximalist goals to  “denazify” Ukraine. Peskov said that the Kremlin would discuss with Ukrainian President Volodymyr Zelensky how Ukraine would meet Russian conditions during peace negotiations and noted that Russia will complete all stated objectives of the “special military operation.”[8] Peskov also noted that all conflicts end at the negotiations table and expressed that relations between Russia and the West will improve soon. Peskov’s statement comes amidst the reports of the Ukrainian counteroffensive progress in southern Ukraine. The stated objectives of the “special military operation” include regime change in Kyiv as well as the surrender of all of Donetsk and Luhansk Oblasts to the Kremlin. Russian efforts to integrate occupied areas of Kherson, Zaporizhia, and Kharkiv Oblasts demonstrate that Moscow expects to keep those territories permanently as well. Peskov’s statement is thus a reiteration of Moscow‘s demands for Ukrainian surrender and offers no indication that Moscow is willing to negotiate seriously and on the basis of a realistic assessment of its prospects in a war that is turning in Ukraine’s direction. 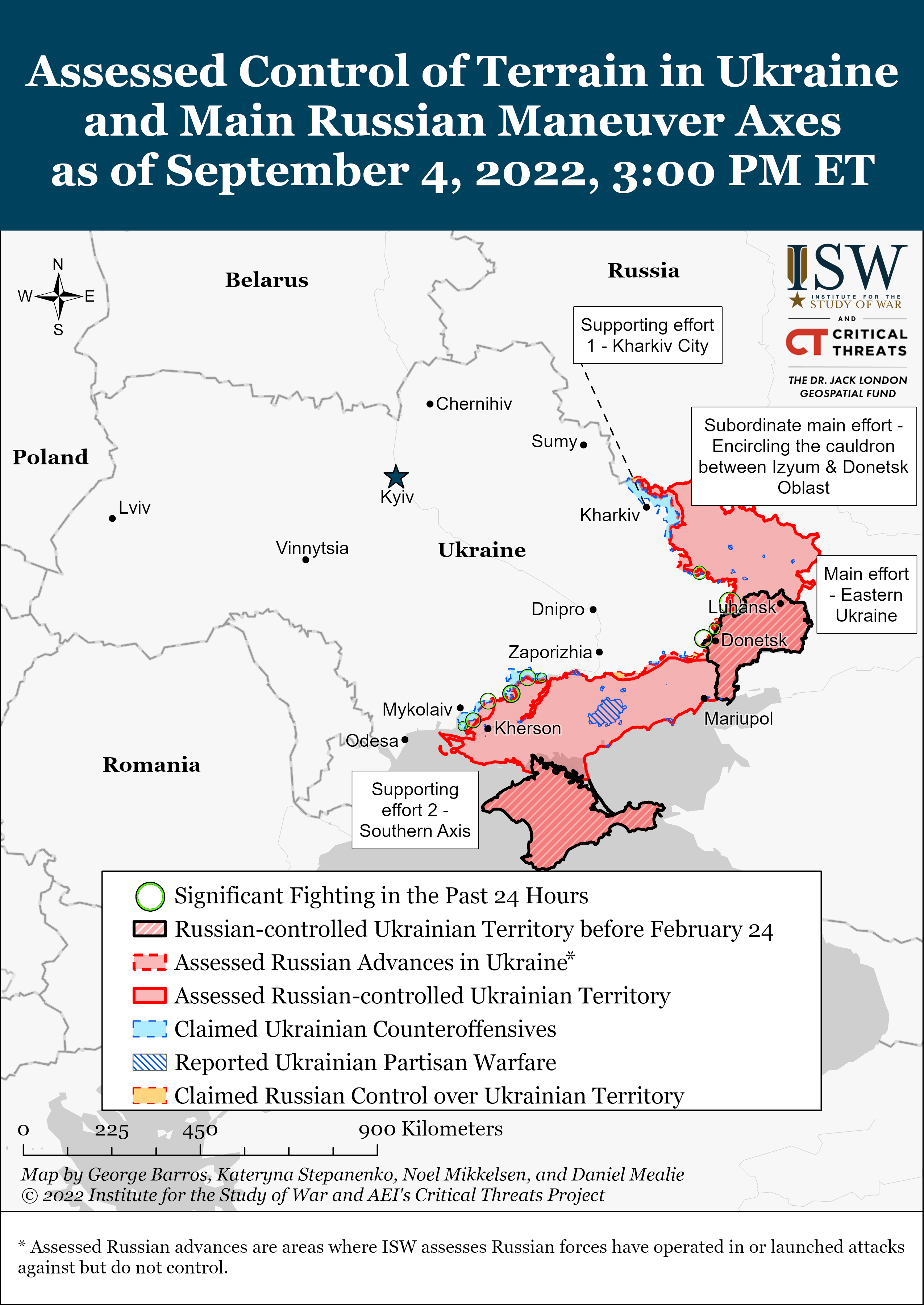 Ukrainian officials announced that Ukrainian forces are continuing to make unspecified advances in Kherson Oblast and are exhausting Russian troops and logistics as part of the counteroffensive on September 4. Ukrainian President Volodymyr Zelensky stated that “Ukrainian flags are returning to those places where they rightfully belong” and noted that Ukrainian forces liberated two unnamed villages in southern Ukraine.[9] Ukrainian officials and social media users published footage of Ukrainian forces raising a Ukrainian flag in Vysokopillya, south of the Kherson-Dnipropetrovsk Oblast administrative border.[10] Russian milbloggers noted that Russian forces withdrew from Vysokopillya to avoid encirclement from the Olhyne and Potomkyne directions (west and east of Vysokopillya, respectively).[11] Some milbloggers noted that a lack of Russian aviation in the area (diverted, they say, to the fight around the Ukrainian bridgehead over the Inhulets River) allowed for Ukrainian advances to Vysokopillya.[12]

The Ukrainian General Staff noted that servicemen of the Donetsk People’s Republic (DNR) 127th Regiment of the 1st Army Corps refused to fight, citing a lack of supplies such as water.[18] The Ukrainian General Staff reported that Russian counterintelligence representatives are dealing with the 127th regiment and that its fate is unknown.[19] Russian forces formed the 127th Regiment of forcefully mobilized personnel in Donetsk and Luhansk Oblast in early April, alongside four other DNR regiments: the 103rd, 109th, 113th, and 125th.[20] ISW previously reported that the DNR redeployed the 109th, 113th, and 125th Regiments to northwestern Kherson Oblast in late July, and the 109th regiment reportedly surrendered on the first day of the Ukrainian counteroffensive.[21] It is likely that Russian forces are reinforcing their frontline positions with inexperienced and forcefully mobilized elements that lack the will to fight.[22]

Gumenyuk noted that the Ukrainian counteroffensive strategy is to exhaust Russian forces and added that Ukrainian forces have enough resources and forces to restrain Russian combat power in southern Ukraine.[23] Ukrainian forces continued to strike Russian ground lines of communication (GLOCs), ammunition depots, and key positions to support Ukrainian ground counteroffensive efforts. Ukrainian officials reported that Ukrainian missile and artillery units struck a Russian ferry crossing in Beryslav (north of Nova Kakhovka), and social media users published footage of Ukrainian forces striking a segment of the Antonivsky Road Bridge on the left bank of the Dnipro River.[24] Ukrainian attacks on ferry crossings are likely in direct support of ongoing counteroffensive operations, as the disruptions generated by such strikes are more ephemeral than those caused by attacks on bridges. Continuing strikes on the bridges, on the other hand, are indicators of a long-term effort to prevent Russian forces from reestablishing GLOCs before the conclusion of the liberation of western Kherson Oblast. Ukrainian military officials noted that Ukrainian forces destroyed a Russian ammunition depot in Bashtanka Raion, and confirmed the destruction of a Russian ammunition depot in Oleshky (approximately nine kilometers south of Kherson City) that occurred on September 2.[25]

Russian milbloggers claimed that battles continued in five directions: east and west of Vysokopillya, near the Ukrainian bridgehead, near Snihurivka approximately 60km east of Mykolaiv City, and northwest and west of Kherson City on September 4. Milblogger accounts remain largely unverifiable as Ukrainian officials have not announced additional advances outside of those mentioned above

The Ukrainian liberation of Vysokopillya ignited some critical discussions among Russian milbloggers, whereas the Russian Defense Ministry maintained that Ukrainian forces continued to conduct “unsuccessful attempts” to advance in the Mykolaiv-Kryvyi Rih direction.[37] The Russian Defense Ministry changed its day-to-day recap of the progress of the Ukrainian counteroffensive from declaring total Ukrainian defeat on August 29, to claiming high Ukrainian losses among personnel and military equipment.[38] Milbloggers largely presented Ukrainian advances in northern Kherson Oblast as a “massacre of Kherson Oblast” due to claimed large losses among Ukrainian troops.[39] Some milbloggers noted that Ukrainian forces conducted a correct counteroffensive around Vysokopillya, and noted that Russian forces lost a tactically significant settlement.[40] This is the first occasion on which some milbloggers have broken with the Kremlin’s optimism about the Ukrainian counteroffensive and recognized Russian setbacks. 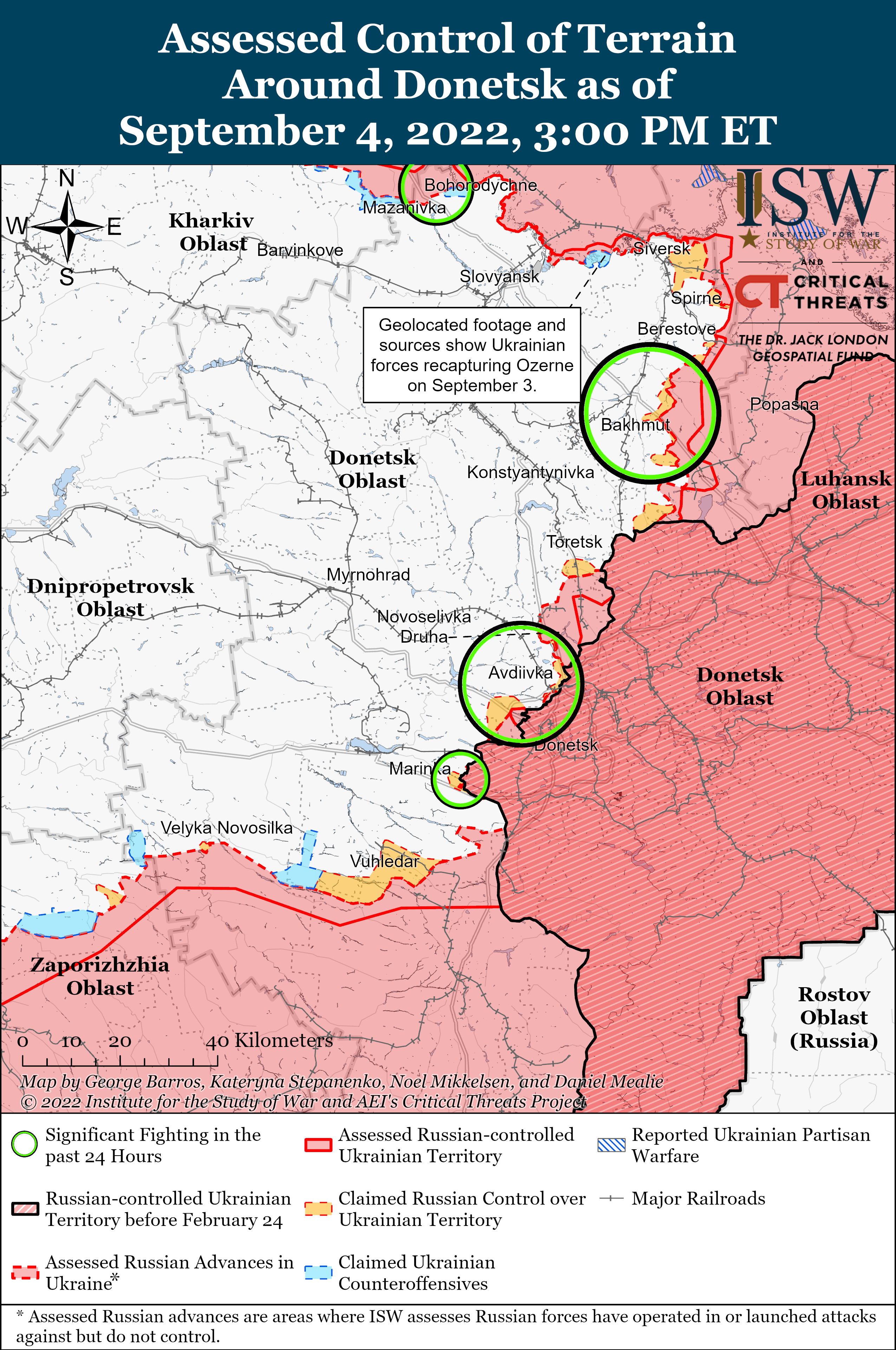 Note: We have revised our organization of Russian lines of effort to include Russian operations in eastern Zaporizhia Oblast as part of the Donetsk Oblast effort due to recently observed force allocations indicating the Russian grouping east of Hulyaipole, previously grouped with the Southern Axis, will support efforts southwest of Donetsk City.

Russian forces did not conduct any ground assaults near Siversk on September 4 and continued routine shelling on settlements in the area.[45] Russian forces conducted an airstrike on Verkhnokamianske, approximately 8km east of Siversk.[46] 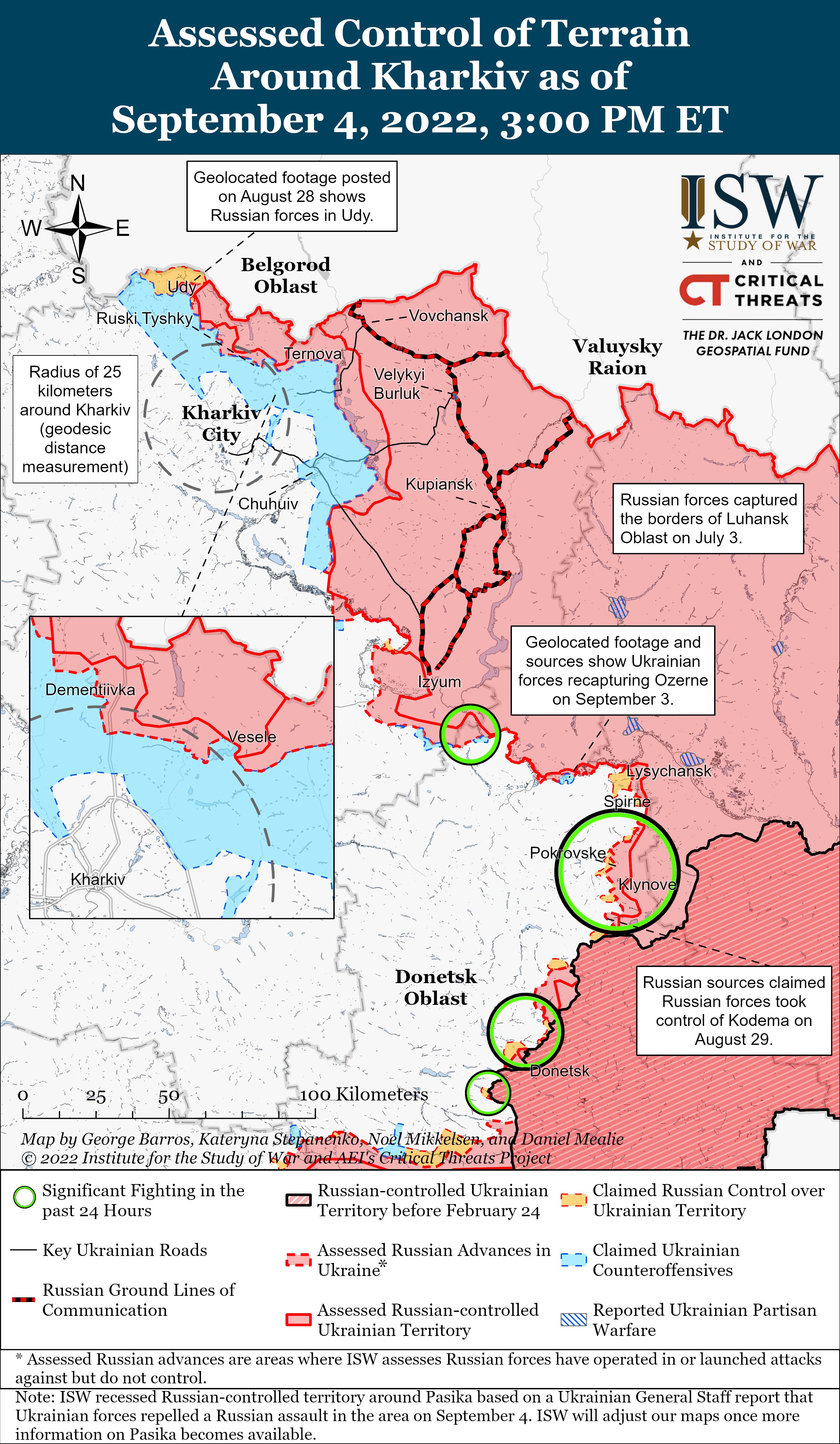 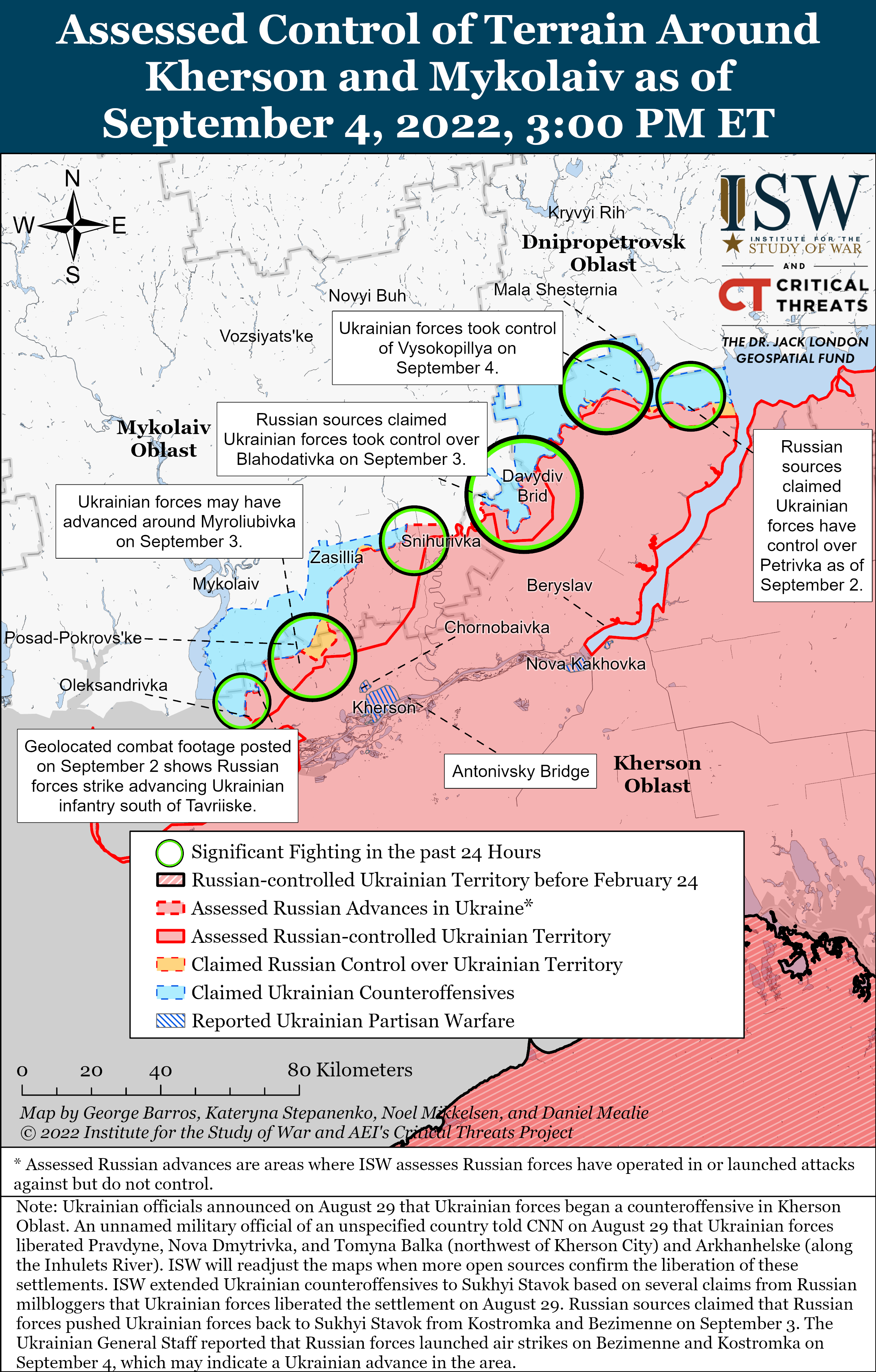 Russian forces did not conduct any ground attacks west of Hulyaipole in Zaporizhia Oblast and continued routine shelling along the line of contact on September 4.[56] The Russian Defense Ministry (MoD) claimed that Russian forces struck a Ukrainian command post in Mykilske, 23km northeast of Orikhiv.[57]

Russian and occupation officials are increasing their claims of Ukrainian attacks on the Zaporizhzhia Nuclear Power Plant (ZNPP). The Russian MoD claimed that Russian electronic warfare systems prevented eight Ukrainian attack drones from striking the ZNPP on September 4, intercepting the drones 1.5km from the ZNPP grounds.[63] Occupation Enerhodar Head Alexander Volga claimed on September 3 that a Ukrainian artillery shell pierced the wall of one of the nuclear reactor containment units on an unspecified date but did not produce the photo of the damage he claimed to possess.[64] Russian news outlet Komsomolskaya Pravda published excerpts of interviews with claimed former ZNPP personnel who left Ukraine for Russia in which the former employees downplayed the risk and impact of a nuclear disaster at the ZNPP.[65] These claimed former employees stated that even direct artillery strikes are unable to penetrate the nuclear reactor containment units because the containment unit walls are too thick.[66] Komsomolskaya Pravda also reported claims that a disaster at the ZNPP would only cause nuclear contamination on a local level with an unspecified span, not a global level.[67]

Russian forces fired on Nikopol and Marhanets, Dnipropetrovsk Oblast, likely from positions near Enerhodar on the opposite bank of the Kakhovka Reservoir.[68]

Russian authorities are continuing to struggle to recruit military personnel within occupied territories. The Ukrainian General Staff reported that Wagner personnel are recruiting convicts from correctional colony No. 124 in Donetsk City.[75] Head of the Donetsk Higher Combined Arms Command School Mikhail Tikhonov stated that the Donetsk Higher Combined Arms Command School suffered a shortage of applicants in 2022, as only 44 people entered the course and only 40 graduated.[76]

Russian occupation authorities in occupied southern Ukraine are continuing filtration and passportization measures to crack down on partisan activity in rear areas during the Ukrainian counteroffensive. Occupation authorities in Tavriisk (immediately west of Nova Kakhovka and on the left bank of the Dnipro River) are reportedly gathering civilian data to intimidate locals into revealing members of the partisan movement.[77] Ukraine’s Resistance Center reported that Russian forces are blocking humanitarian convoys from entering occupied Zaporizhia Oblast through the checkpoint at Vasylivka to coerce civilians into accepting Russian passports in exchange for humanitarian aid.[78] The Ukrainian Ministry for Reintegration of Occupied Territories announced on August 22 that it is restricting all passage in and out of occupied southern Ukraine through Vasylivka, Zaporizhia Oblast (the only checkpoint for such passage) to transit for humanitarian purposes only, likely because of the occupation administrations’ coercion and passportization efforts.[79]