Russian officials are preparing for further covert mobilization efforts even as the fall conscription cycle is underway, likely further flooding the already overburdened Russian force generation apparatus in such a way that will be detrimental to the development of mobilized and conscripted servicemen. Russian Telegram channels actively discussed indicators on November 18 that the Kremlin is preparing for a second mobilization wave and circulated an image of a draft summons received by a citizen of St. Petersburg who was reportedly told to appear for mobilization in January 2023 despite Russian President Vladimir Putin’s announcement of the formal end of partial mobilization on October 31.[1] Nationalist milbloggers additionally circulated claims that general mobilization will begin in December or January.[2] An independent Russian outlet published an investigation on November 18 showing that state structures and enterprises are continuing to prepare their employees for mobilization by sending them to various training programs and mobilization-related educational courses.[3] Another Russian outlet noted that the Odintsovo garrison military court in Moscow Oblast inadvertently confirmed that mobilization is continuing despite its formal end.[4] The court reportedly accused a mobilized soldier of beating his commander on November 13 “during the performance of his duties of military service or in connection with the performance of these duties during the period of mobilization,” which indicates that the court is operating on the legal basis that mobilization is still very much underway.[5] The Kremlin has said that Russian President Vladimir Putin has no need to sign a decree formally ending the mobilization period, as ISW has previously reported.[6]

The continuation of covert mobilization efforts and potential preparations for another mobilization wave in tandem with the current fall conscription cycle are likely adding substantial strain to an already over-burdened Russian force generation apparatus. As ISW previously assessed, Putin likely ordered the end of partial mobilization in order to free up bureaucratic and administrative capacity for the November 1 conscription class.[7] However, it is evident that Russian authorities never fully halted mobilization efforts, which means that a limited number of mobilized recruits are still being forced through the training system at the same time as conscripts are going through their own training cycle. This will likely lead to even lower quality training for both mobilized recruits and conscripts as they compete for insufficient training capacity. Another wave of mobilization in the coming months will only worsen the situation and likely degrade the overall quality of the Russian troops that will be funneled to the frontline in Ukraine.

The International Atomic Energy Agency (IAEA) announced that it does not recognize the illegal Russian seizure and operation of the Zaporizhzhia Nuclear Power Plant (ZNPP) or the illegal annexation of occupied Ukrainian territory, a sharp escalation in IAEA rhetoric. The IAEA’s Board of Governors issued a statement on November 17 that called on Russia to “immediately abandon its baseless claims of ownership of the plant” and to withdraw “military and other personnel” from the ZNPP due to “grave concerns” over the ZNPP’s integrity.[8] The IAEA issued a statement on November 18 that Russian strikes on November 17 partially or completely cut power to Ukraine’s Khmelnytskyy Nuclear Power Plant and Rivne Nuclear Power Plant, and IAEA Director-General Rafael Grossi stated that these strikes demonstrate “the potential nuclear safety and security risks facing all of Ukraine’s nuclear facilities during this terrible war, not just the Zaporizhzhia Nuclear Power Plant.”[9] ISW recently assessed that the IAEA’s rhetorical shift suggests that Russian physical control and operational authority over the ZNPP alarms the IAEA.[10] Russian forces’ ongoing threats to both the ZNPP and Ukrainian nuclear power plants (NPPs) in unoccupied territory indicate that Russia is an unsuitable caretaker of the ZNPP, even though the Russian government relies on claims that it is a responsible operator of the ZNPP to legitimize its ongoing presence at the plant.[11] 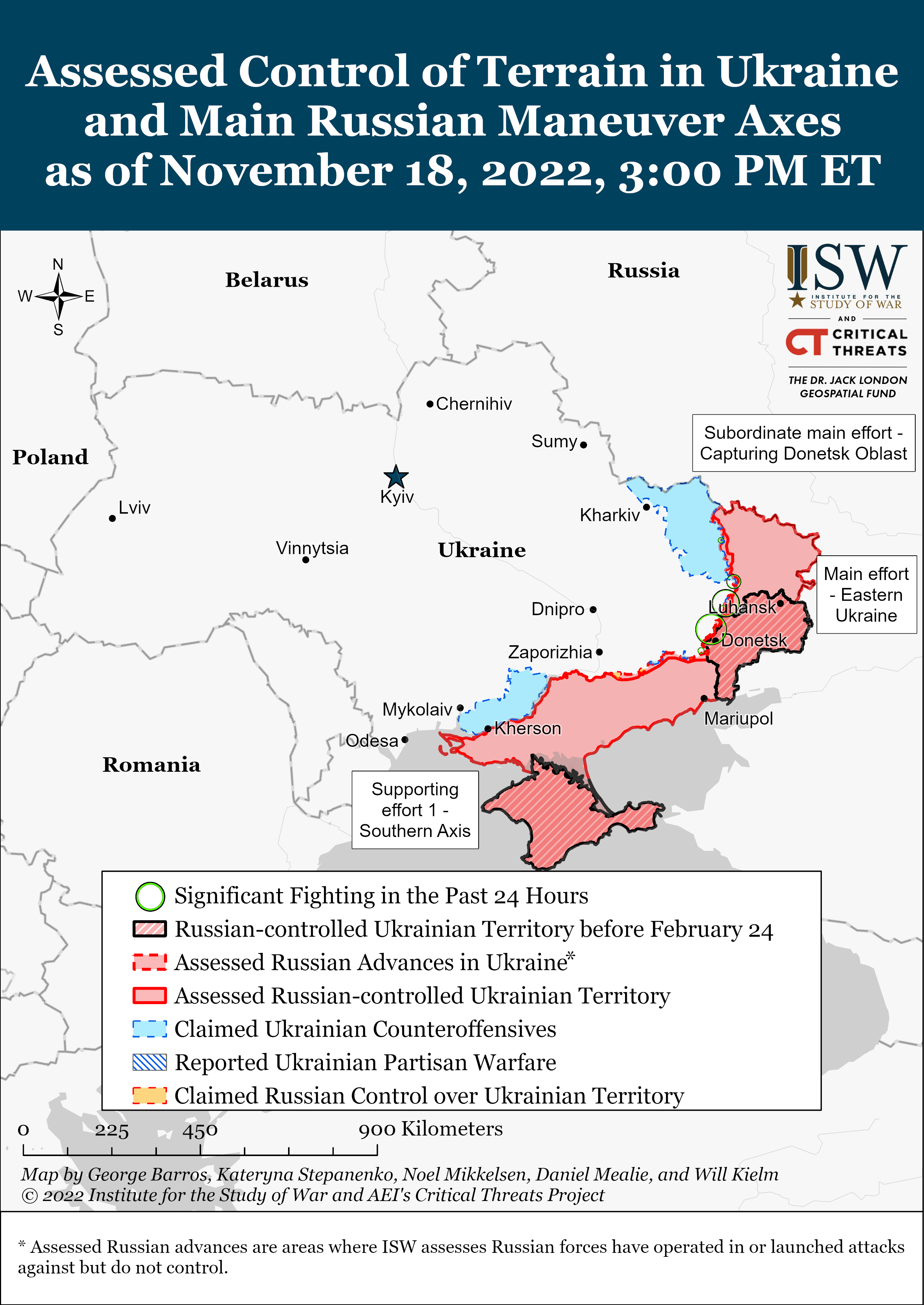 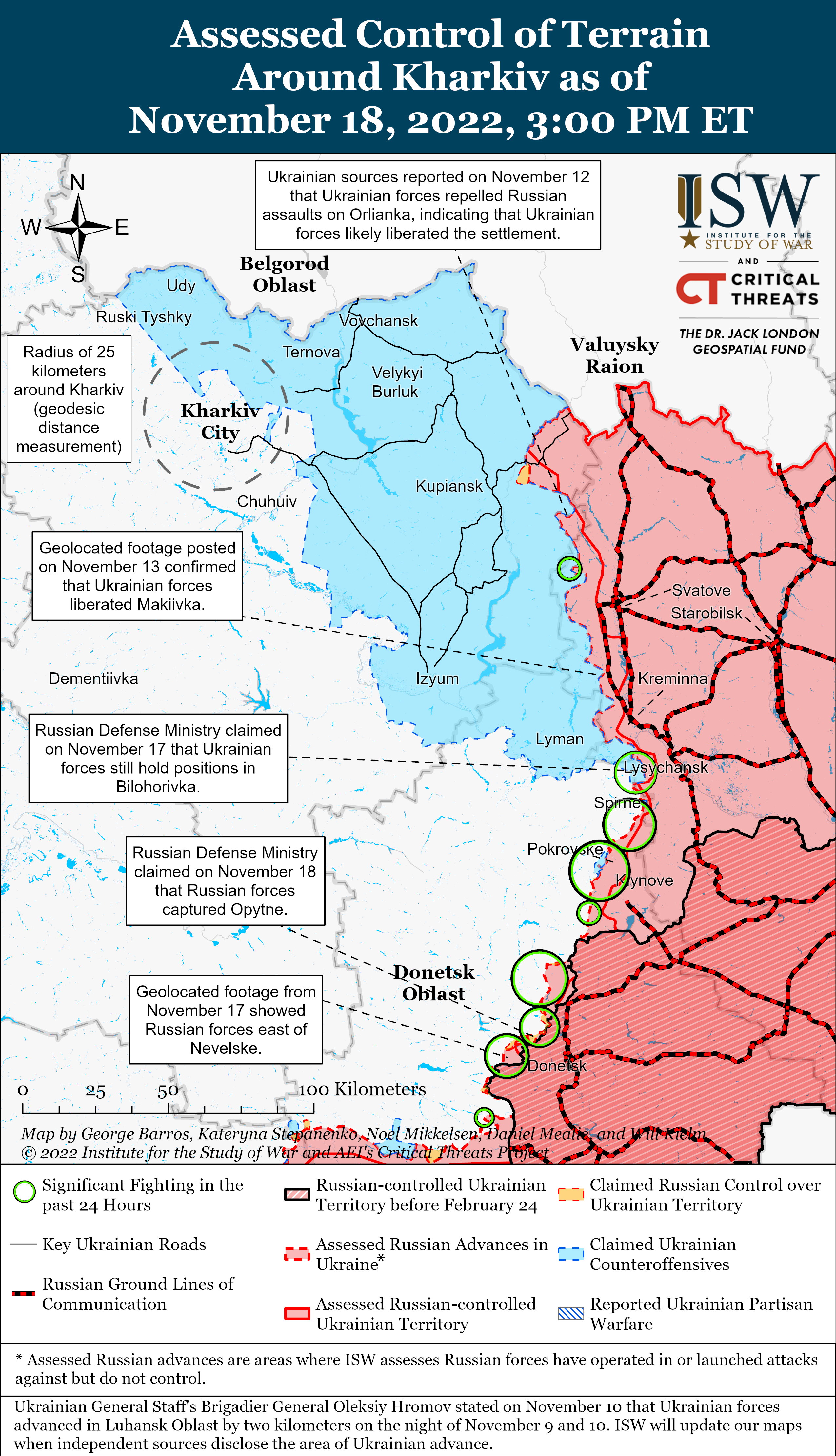 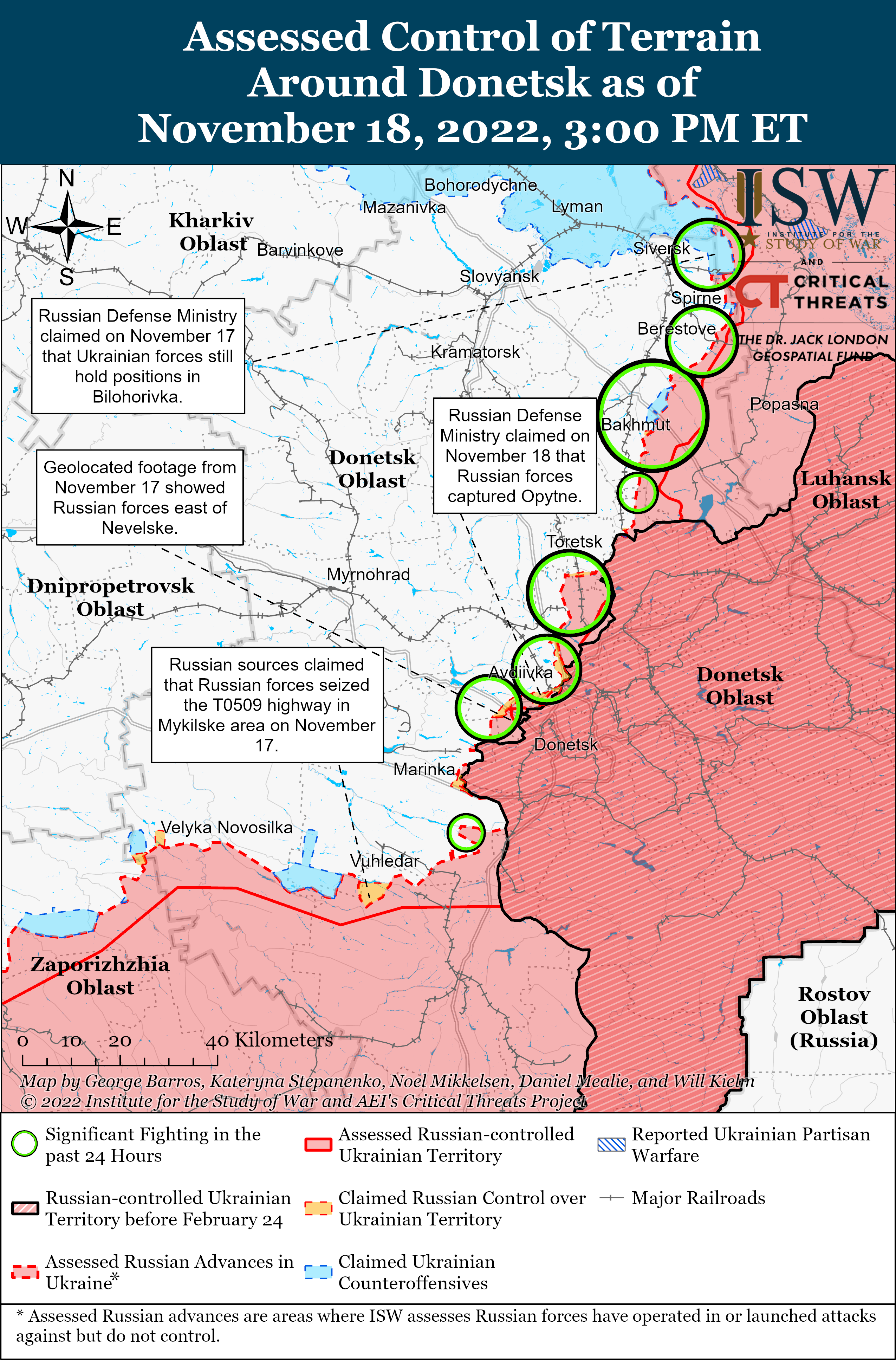 Ukrainian forces continued to strike Russian military assets and concentration areas south of the Dnipro River. The Ukrainian General Staff reported on November 18 that Ukrainian strikes in previous days killed over 50 Russian military personnel in Skadovsk and destroyed an ammunition depot in Chaplynka.[31] Ukraine’s Southern Operational Command stated that Ukrainian strikes destroyed military assets along the eastern bank of the river, including in Nova Kakhovka, Hola Prystan, and Oleshky.[32]

Russian occupation officials and military leadership are seemingly increasingly concerned about subsequent Ukrainian counteroffensive operations in southern Ukraine. The Ukrainian General Staff stated that Russian forces are accumulating engineering equipment to construct defensive lines in Mykhailivka Raion, Zaporizhia Oblast, (on the T0810 and T0818 highway intersection and connects Melitopol to the checkpoint at Vasylivka and Enerhodar) and are using production enterprises in Zaporizhia Oblast to construct more defensive structures.[33] Zaporizhia Oblast occupation official Vladimir Rogov stated that Russian officials are not preparing for a winter “lull” in hostilities in Zaporizhia Oblast.[34] Crimean occupation head Sergei Aksyonov announced on November 18 that Russian forces are building defensive lines in northern Crimea after satellite imagery emerged on November 10 of Russian defensive lines in the area.[35] As ISW has previously reported, Russian forces have increasingly relied on logistics lines through southern Ukraine, particularly connecting Melitopol to Crimea, to supply forces in southern Ukraine following the attack on the Kerch Strait Bridge.[36] 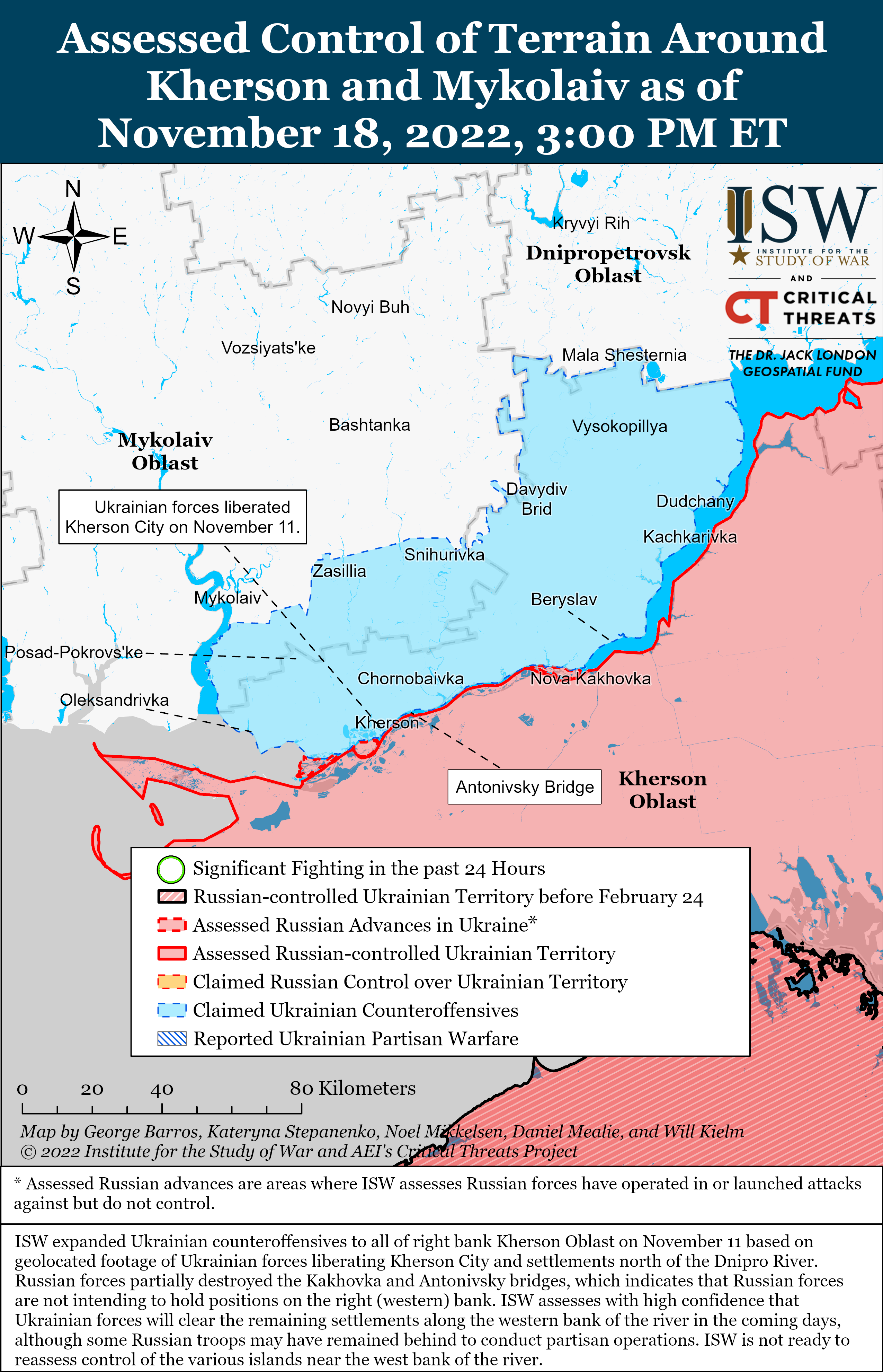 Russia continues to face exceedingly low morale and poor discipline among its forces against the backdrop of ongoing domestic backlash to partial mobilization. A Russian source reported a case of drunken mobilized men engaging in a mass physical altercation at the Leninsky market in Omsk, Russia around November 6.[39] Footage posted on November 18 showed Russian conscripts complaining about being mismanaged.[40] A Russian source highlighted that Russian authorities continue to mobilize men with health problems and men originally promised deferments without explanation.[41] Citizens of St. Petersburg amplified Russian troops’ complaints of poor training, failing equipment, and mistreatment by demanding change and picketing in front of the Western Military District Headquarters in St. Petersburg.[42] A Russian media source reported that a Russian court ruled to block links to a popular petition against mobilization on Change.org that had over 500,000 signatures.[43] Another Russian source reported that Russian authorities forced college students to go to a military training camp in Dolgoprudny, Moscow Oblast, under the threat that they would not receive their diplomas otherwise.[44] The source stated that these students fear that Russian authorities will mobilize them after this training.[45]  A Russian milblogger criticized Russian authorities’ mismanagement of mobilization and failure to properly train and equip mobilized Russians as a “war crime.”[46]

Russian forces continued efforts to expand training capabilities and replenish diminishing supplies. The Russian MoD shared multiple reports on November 17 of mobilized Russian troops training at centers in Buryatia Republic, Kaliningrad Oblast, and Novosibirsk Oblast.[47] The Russian MoD emphasized that experienced instructors are training mobilized men in various combat skills including weapons training, hand-to-hand combat, operating drones, and first aid.[48] The Russian MoD is likely presenting these reports in a continued attempt to quell public dissatisfaction with the level of training mobilized servicemen are receiving. A Russian source reported on November 18 that Russian forces began to receive Iranian-made flak jackets and helmets, which is consistent with previous reports that Russian forces are relying on foreign-provided weapons and armor due to a shortage of domestic supply.[49] Multiple Russian sources reported that the Russian public has had to supplement Russian supply shortages with their own contributions.[50]