The Ukrainian Resistance Center reported on June 28 that the Kremlin is setting conditions to annex areas of Kherson and Zaporizhia into the Russian Federation under the template of the pre-1917 “Tavriia Gubernia.”[1] The Tavriia (or Tauride) Gubernia was a historical province of the Russian Empire.[2] Under the Tavriia Gubernia scenario, the left bank of Kherson Oblast and part of Zaporizhia Oblast would be directly annexed to the Russian Federation, likely as a single unit.[3] The Ukrainian Resistance Center stated that Russian authorities are preparing for a pseudo-referendum to set conditions for the annexation of the Tavriia Gubernia (as opposed to proxy “people‘s republics“). The Russians are also requiring Ukrainian citizens in southern Ukraine to open bank accounts with Russian state-owned Promsvyazbank.[4] Head of Ukraine’s Kherson Oblast Administration Hennadiy Lahuta reported that Russian forces have locked down civilian traffic in northern Kherson Oblast and are not allowing anyone to enter or exit occupied territory, which may be an additional attempt to control the civilian population in preparation for annexation measures.[5]

Ukrainian sources warned on June 29 that Russian forces may be planning a false flag provocation at the Zaporizhzhia Nuclear Power Plant (NPP) to accuse Ukrainian authorities of mishandling nuclear facilities.[6] Ukrainian nuclear operating enterprise Energoatom stated that Russian occupation authorities are planning to throw unsafe objects into the cooling system at the NPP in order to compromise the plant’s cooling mechanisms.[7] Mayor of Enerhodar Dmytro Orlov added that Russian troops have been kidnapping and torturing employees of the NPP to coerce confessions that employees dropped weapons into the cooling systems to sabotage the plant and blame Ukrainian authorities for paying inadequate attention to the management of the NPP.[8] Russian troops have previously demonstrated irresponsible and dangerous behavior in and around nuclear power plants, firing on nuclear facilities at the Zaporizhzhia NPP in early March and digging into radioactive soil in the Chornobyl Exclusion Zone.[9] 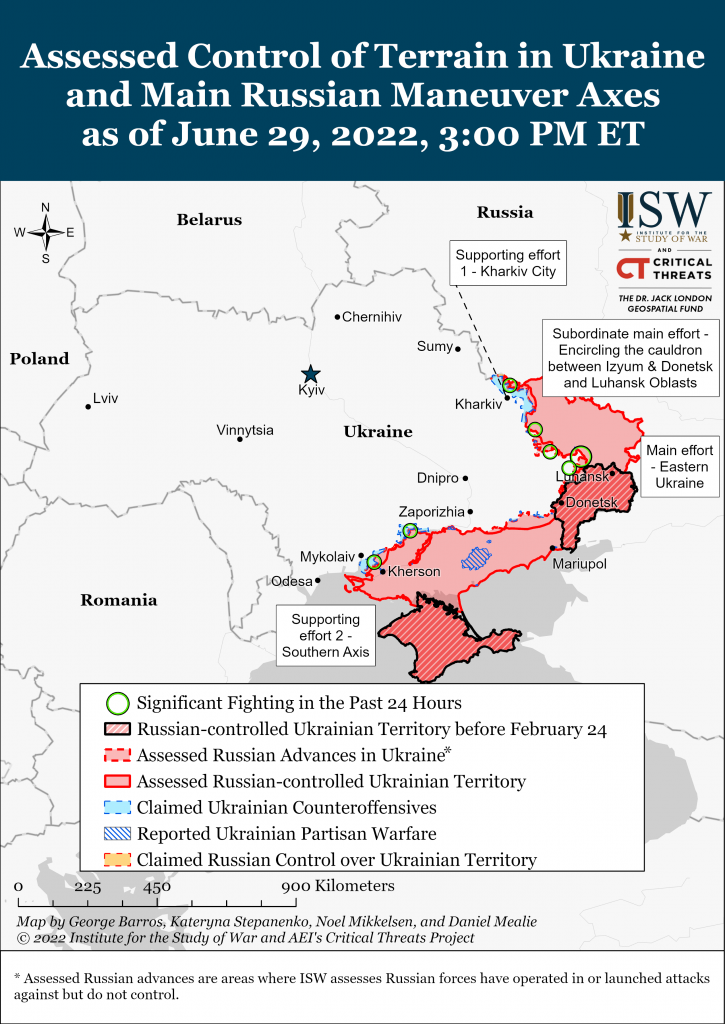 Russian forces continued offensive operations in and around Lysychansk on June 29. The Ukrainian General Staff stated that Russian forces are attempting to advance on Lysychansk from the Verkhnokamyanka-Vovchoyarivka line, about 5km southwest of Lysychansk.[10] Luhansk Oblast Administration Head Serhiy Haidai noted that two Russian battalion tactical groups (BTGs) are engaged in offensive operations towards Lysychansk, although these BTGs are likely to be substantially under-strength and heavily degraded following protracted conflict around Severodonetsk and Lysychansk.[11] Russian forces are likely advancing within Lysychansk itself and are reportedly fighting in southwestern and southeastern suburbs of the city, as well as on the territory of the industrial zone in the gelatin and rubber plants.[12]

Russian Telegram channel Rybar claimed that Russian forces have crossed the Siverskyi Donets River northwest of Lysychansk and established a bridgehead in Privillya, which indicates that Russian forces may be attempting to complete the seizure of the northwestern apex of the Lysychansk salient.[13] Ukrainian forces may have reduced or abandoned their efforts to hold the western banks of the Siverskyi Donets River north of Lysychansk because Russian forces are already advancing on Lysychansk from the south along the western bank.  The Russians likely have also learned to avoid the kinds of tactical errors that allowed Ukrainian artillery to decimate a BTG attempting to cross the river at Bilohorivka on May 15. Russian forces continued assaults on settlements along the T1302 highway near Lysychansk in the area of Spirne, Berestove and Verkhnokamyanka.  The Russians have already deprived Ukrainian forces of the ability to use this highway to support their troops in Lysychansk, as ISW previously reported on June 23, and are now likely continuing operations along the highway to complete the encirclement of Lysychansk from the south.[14]

Russian forces continued offensive operations northwest of Slovyansk near the Kharkiv-Donetsk Oblast border on June 29.[19] The Ukrainian General Staff stated that Russian forces are fighting around Bohorodychne and Krasnopillya, likely in order to drive southeast on Slovyansk along the E40 highway.[20] The Ukrainian General Staff additionally noted that Russian forces shelled Mykilske—a settlement 15km northwest of Slovyansk that is separated from the E40 highway by a distinctive network of reservoirs that run parallel to the E40 between Dolyna and Slovyansk.[21] Russian forces may be shelling Mykilske to complement offensive operations to the south of Dovhenke (which also lies to the west of this water feature) in order to set conditions for offensive operations towards Slovyansk from the road network west of the reservoirs, in addition to the existing effort to drive down the E40. Russian forces additionally shelled Majaky and Tetyanivka to set conditions to advance on Slovyansk from the west of Lyman.[22] 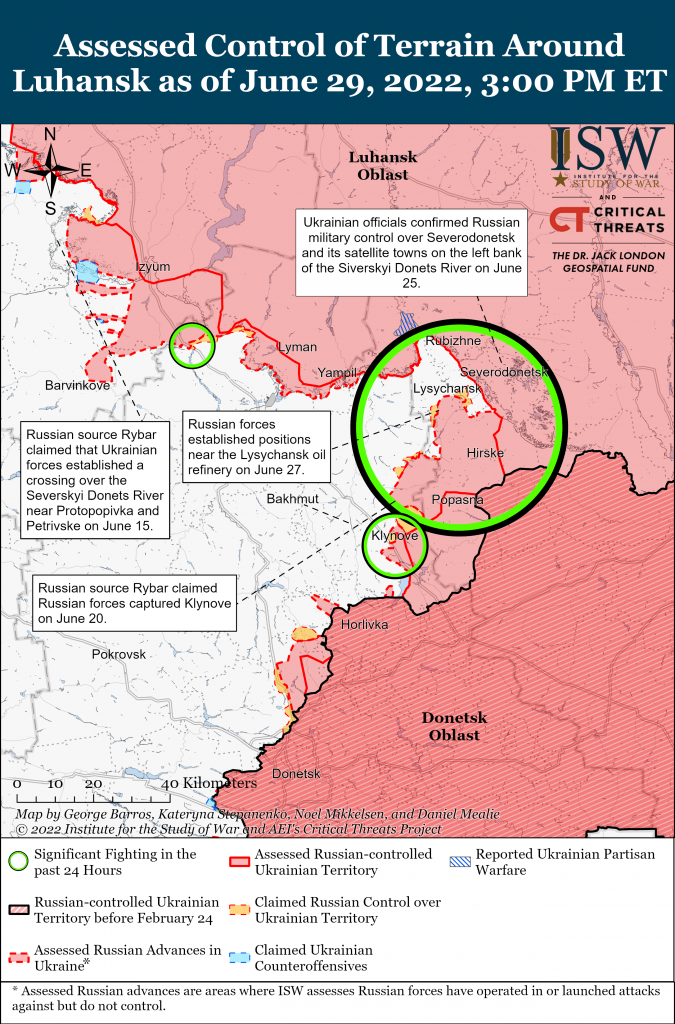 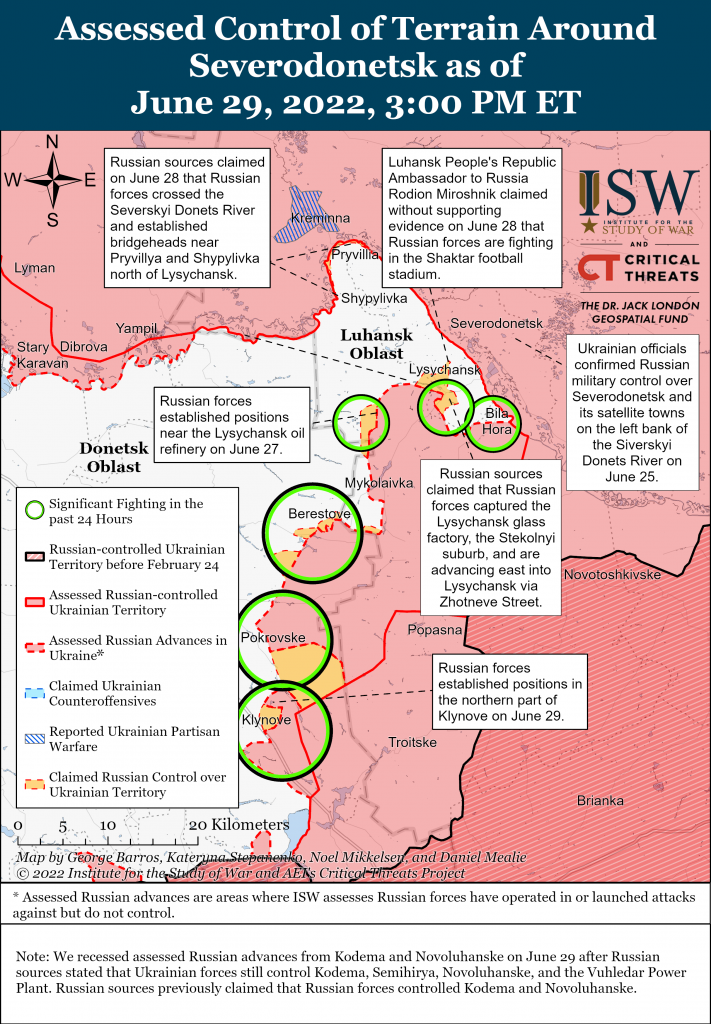 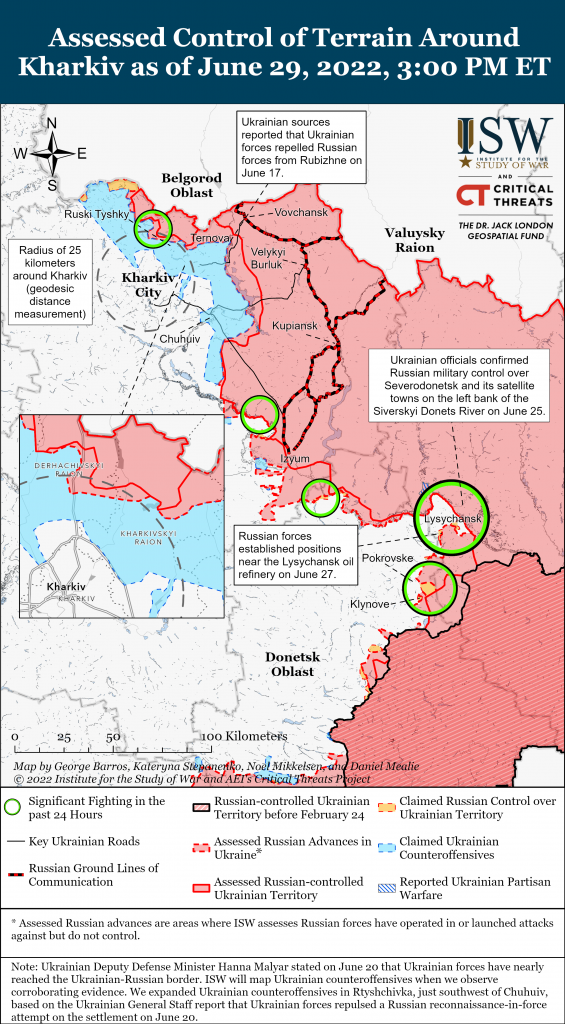 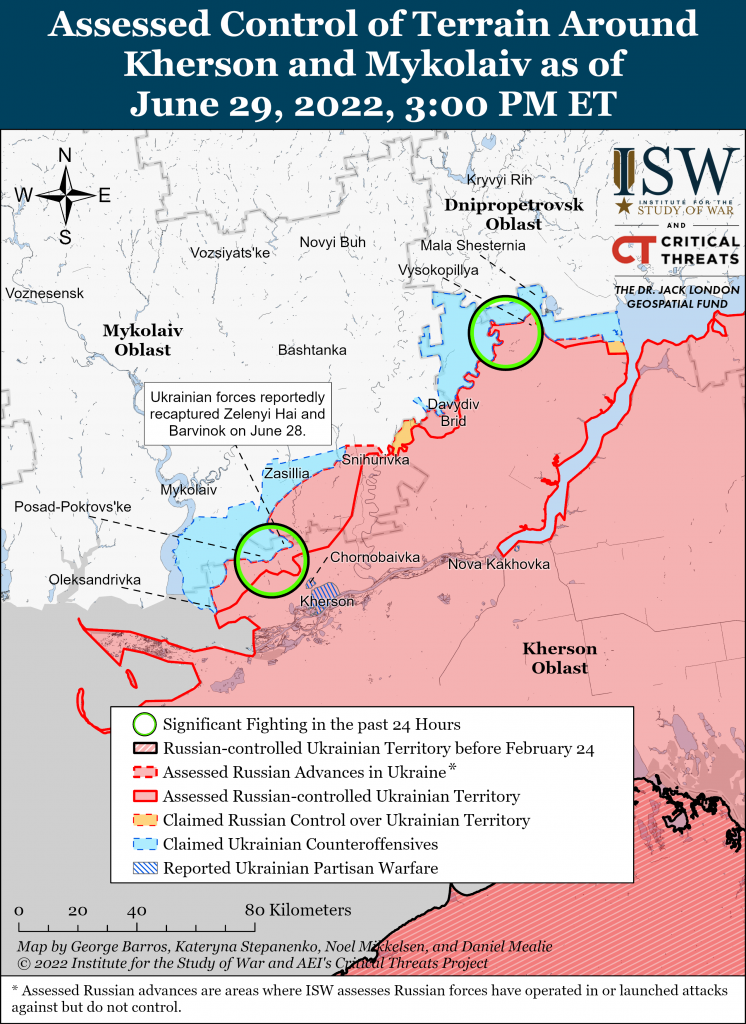 Russian occupation authorities continued to set conditions to prepare for referenda on the annexation of occupied areas of Ukraine into the Russian Federation. Russian-appointed Kherson Occupation Administration Deputy-Head Kiril Stremousov stated on June 29 that his administration is preparing for a referendum on the accession of Kherson Oblast to Russia.[33] Several Ukrainian sources reported that in order to prepare for such referenda, Russian authorities are escalating efforts to collect personal data of Ukrainian citizens living in occupied areas.[34] Collection of personal information advances Russian occupational objectives beyond preparing for referenda and will allow Russian authorities to consolidate administrative control of occupied areas prior to making political moves to integrate these areas directly into the Russian Federation.