Russian President Vladimir Putin celebrated the Russian seizure of Lysychansk and the Luhansk Oblast border and appeared to direct the Russian military to conduct an operational pause. Putin met with Russian Defense Minister Sergey Shoigu on July 4 to discuss recent Russian gains in Luhansk Oblast and presented Colonel General Alexander Lapin and Major General Esedulla Abachev with the “Hero of Russia” award for their leadership during the Lysychansk operation.[1] Putin and Shoigu presented the capture of Lysychansk and Luhansk Oblast as a major victory for Russian forces in Ukraine. Putin also stated that the Russian units that participated in the battle for Lysychansk should rest to increase their combat capabilities.[2] Putin‘s public comment was likely meant to signal his concern for the welfare of his troops in the face of periodic complaints in Russia about the treatment of Russian soldiers. His comment was also likely accurate—Russian troops that fought through Severodonetsk and Lysychansk very likely do need a significant period in which to rest and refit before resuming large-scale offensive operations. It is not clear, however, that the Russian military will accept the risks of a long enough operational pause to allow these likely exhausted forces to regain their strength.

Former Russian military commander Igor Girkin, an ardent Russian nationalist who commanded militants during the 2014 war in Donbas, posted a scathing critique of the Kremlin’s handling of the war on his Telegram channel and questioned the significance of the seizure of Lysychansk. He suggested that Russian forces had paid too high a price for a limited gain. In a series of Telegram posts published prior to Putin’s meeting with Shoigu on July 4, Girkin complained that Russian forces have failed to meet the announced goals of the “second stage of the special operation” (the operations in eastern Ukraine following Russia’s retreat from Kyiv) to his nearly 400,000 subscribers.[3] Girkin noted that the Ukrainian defense of Lysychansk was deliberately designed to inflict maximum damage on Russian troops and burn through Russian manpower and equipment. He strongly suggested that accepting battle on the Ukrainians‘ terms was a significant misstep by the Russian leadership.[4] Girkin stated (before Putin’s remarks were made public) that Russian troops need time to rest and replenish in order to recover their offensive potential and noted that the lack of individual soldier replacements and unit rotations is severely degrading morale. He warned, however, that taking time to reconstitute offensive capability would allow Ukrainian troops to seize the initiative and further threaten Russian gains.[5] Girkin additionally claimed that Russian forces have limited prospects of advancing elsewhere in Ukraine due to Ukrainian personnel and equipment superiority.[6]

Girkin’s critique is a noteworthy example of the way Russian milbloggers and military enthusiasts have become disillusioned with the Kremlin’s handling and execution of operations in Ukraine, particularly after the dramatic failed river crossing attempt at Bilohorivka in early May.[7] Girkin’s statements directly undermine the Kremlin’s efforts to frame Lysychansk as a significant victory or turning point and show that the disillusionment amongst ultra-nationalist elements in the Russian information space continues to run deep. Girkin’s assessment of Russian military failures notably aligns with much of ISW’s (and other Western agencies’ and experts’) analysis, suggesting that he and some other milbloggers continue to make and publish assessments of the situation and forecasts independent of the Kremlin line. Girkin likely hopes to use his status as a prominent former participant in the war in Donbas in 2014 to persuade Putin to take certain measures to secure Russian success in a war that Girkin still thinks is justified and necessary—specifically mobilizing the Russian population for war on a much larger scale.[8] Girkin, along with other members of the Russian nationalist milblogger space, will likely continue to offer critiques of the Kremlin’s line on operations in Ukraine to advocate for general mobilization and more competent Russian military leadership. 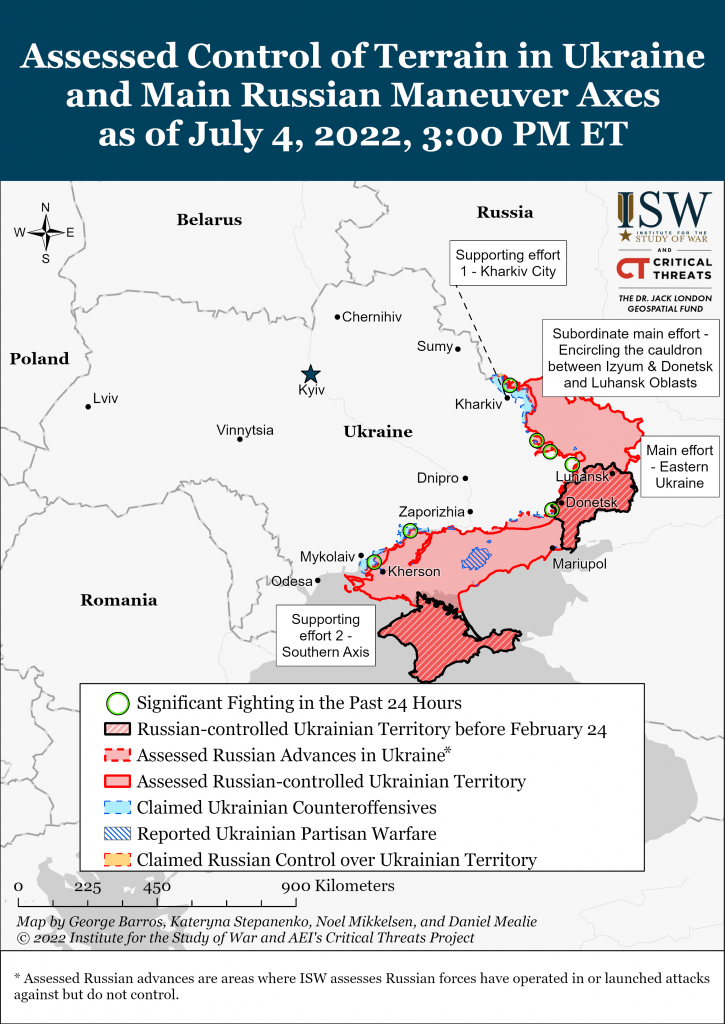 Russian forces continued offensive operations to the east of Bakhmut on July 4 to prepare for subsequent offensive operations toward Bakhmut and Siversk.[15] The Ukrainian General Staff reported that Russian forces conducted a reconnaissance in force on the outskirts of Berestove and undertook offensive operations around the Vuhledar Power Plant, Vasylivka, Spirne, Klynove, and Mayorsk.[16] Russian forces will likely continue efforts to move west of the T1302 Bakhmut-Lysychansk highway to eventually drive on Bakhmut and Siversk, although their ability to do so successfully following losses sustained during attempts to take Lysychansk is questionable.[17] NASA’s Fire Information for Resource Management System (FIRMS) remotely sensed data showed fires near Spirne, Klynove, and the Vuhledar Power Plant on July 4, consistent with the Ukrainian General Staff’s reports. 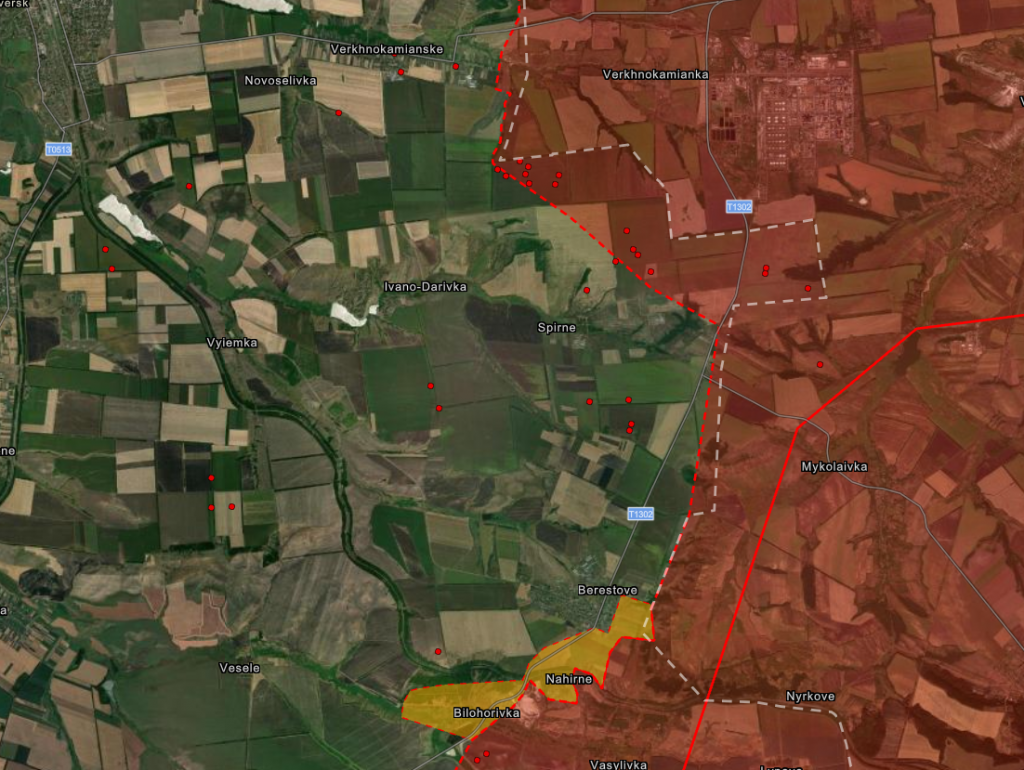 Russian forces continued offensive operations northwest of Slovyansk near the Kharkiv-Donetsk Oblast border and made incremental gains on July 4.[20] The Ukrainian General Staff stated that Russian forces had “partial success” in Mazanivka, about 20 km northwest of Slovyansk, and fought in Bohorodychne and Dolyna.[21] Russian forces also reportedly redeployed a battalion tactical group (BTG) from Izyum to Snizhkivka- just south of Izyum in the direction of Barvinkove, which may suggest that Russian forces are preparing for renewed offensives southeast of Izyum towards Barvinkove. NASA FIRMS data for July 4 showed large concentrations of heat anomalies in the wooded areas to the southeast of Izyum indicating probable locations for Russian indirect fire and Ukrainian counterbattery fires. 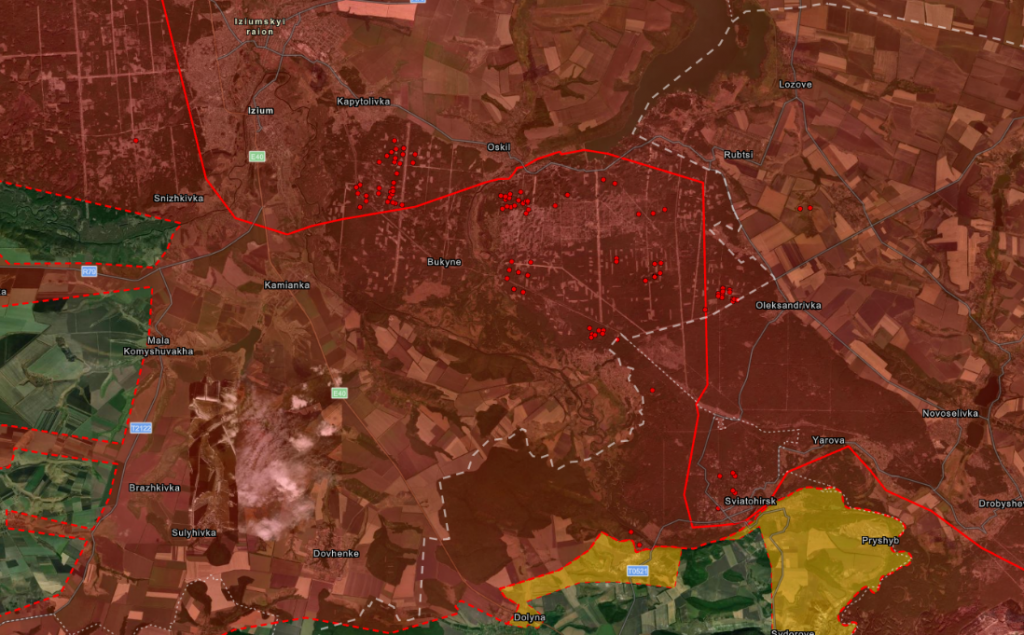 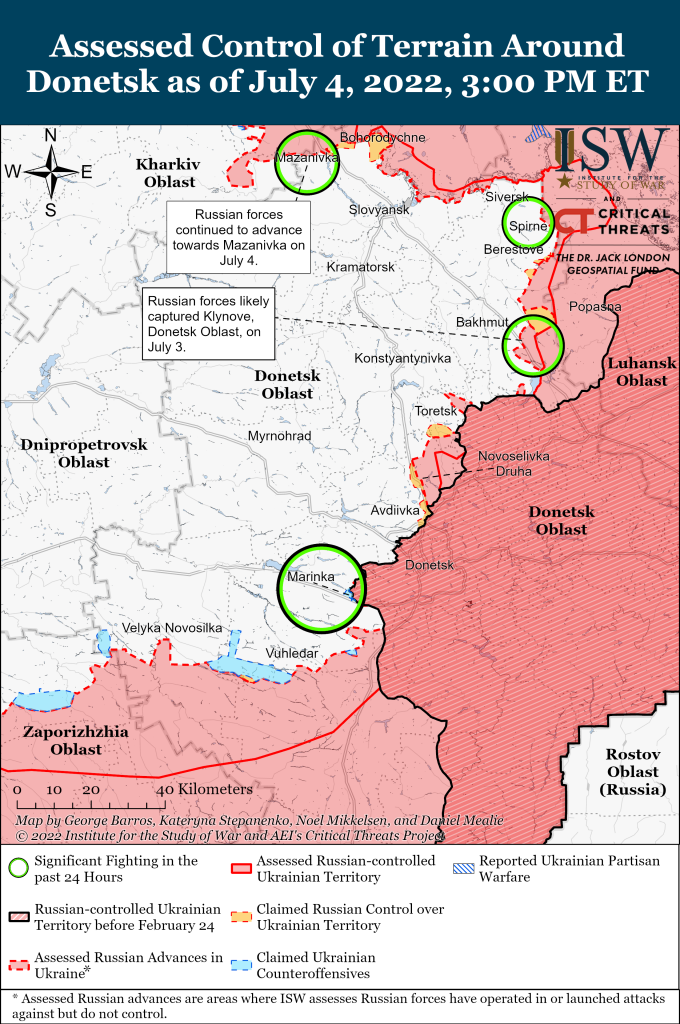 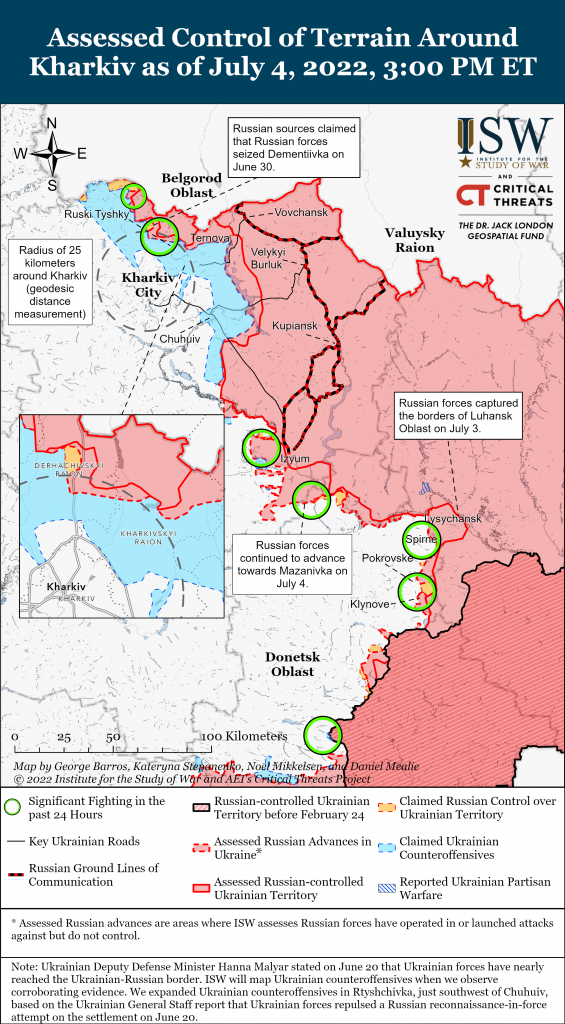 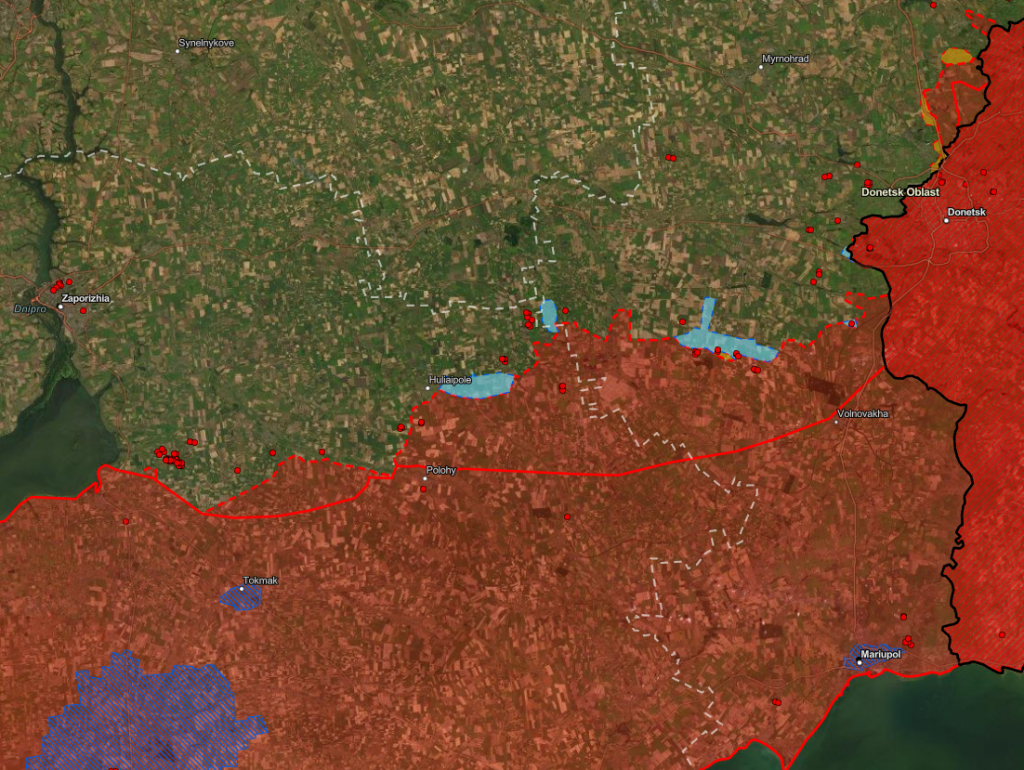 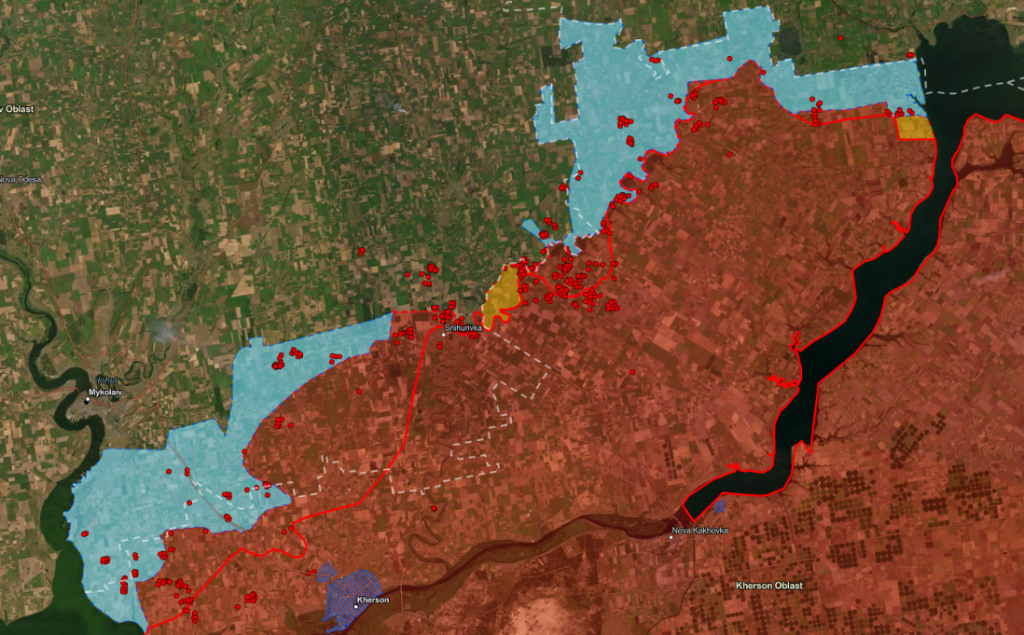 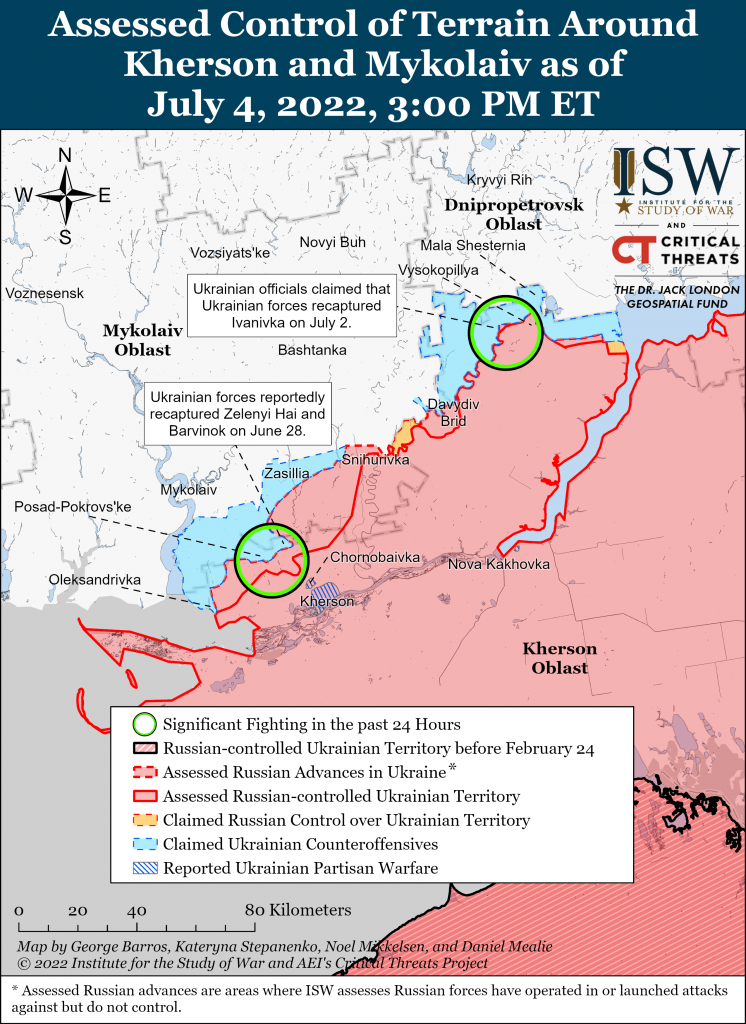 Russian leaders may be preparing to mobilize Ukrainian citizens in occupied areas. The Representative of the Ukrainian President in Crimea stated on July 3 that the Russian administration in Crimea issued a decree creating a “conscription commission for the mobilization of citizens in the Republic of Crimea,” which would allow Russian authorities to forcibly mobilize residents of Crimea to fight against Ukraine.[33] While the status of Crimea under Russian Federation law (but not under Ukrainian or international law) is distinct from the areas of eastern and southern Ukraine that have been occupied since February 24, this decree may set an internal Russian precedent for Russian authorities to begin forced mobilization campaigns throughout occupied parts of Ukraine to support force generation efforts in the coming months.

Russian authorities continued to set conditions for various annexation scenarios on July 4. Director of Ukraine’s Main Intelligence Directorate (GUR) Kyrylo Budanov stated that Russia is preparing several annexation scenarios before September 11, the suggested date for the annexation of Ukrainian territory into the Russian Federation.[34] Budanov claimed that Russia may be preparing to join Ukrainian territories to Russia, create one large ”People’s Republic,” or annex individual territories to Russia. The suggestion of a singular, large ”People’s Republic” is novel and has not yet been discussed by Ukrainian or Russian authorities. A single ”People’s Republic” likely indicates that the Kremlin continues to hold territorial aspirations beyond the Donbas.