A kinetic event killed and wounded scores of Ukrainian POWs in Russian-occupied Olenivka, Donetsk Oblast, on July 28.[1] Ukraine and Russia are blaming each other for the attack and available visual evidence appears to support the Ukrainian claim more than the Russian, but ISW cannot independently assess the nature of the attack or the party responsible for it at this time. The Russian Defense Ministry asserted that Ukrainian forces deliberately struck the Olenivka pre-trial detention center holding Ukrainian POWs including Azov Regiment servicemen using Western-provided HIMARS, killing at least 40 and wounding 75 POWs.[2] Kremlin-sponsored news outlet “RIA Novosti” published videos of the detention center, which showed fire damage but not the sort of damage that a HIMARS strike would likely have caused.[3] RIA Novosti also released footage of HIMARS missile fragments but provided no evidence that the fragments were recovered at Olenivka.[4] Luhansk People’s Republic (LNR) Ambassador to Russia Leonid Miroshnik claimed that Ukrainian forces struck the pre-detention center to eliminate the evidence of Ukrainian surrenders and prevent POWs from speaking out against the Ukrainian government.[5]

The Ukrainian General Staff said that Russian forces conducted the attack as a false flag operation to cover up Russian war crimes, disrupt the supply of Western weapons, discredit Ukrainian forces, and stoke social tensions within Ukrainian society.[6] The Ukrainian General Staff stated that a deliberate explosion occurred near the newly-constructed penal colony, to which Russian forces had transferred Ukrainian POWs a few days earlier. The Ukrainian General Staff also noted that Ukrainian analysis of the damage to the building, intercepted phone conversations between Russian servicemen, the lack of reported shelling in Olenivka, and the absence of casualties among Russian personnel serving at the penal colony all point to a Russian deliberate “terrorist act” as the cause of the incident.[7] The Ukrainian Main Military Intelligence Directorate (GUR) accused Wagner Group head Yevgeny Prigozhin of ordering the “terrorist act” without consulting with the Russian Defense Ministry, to conceal the embezzlement of funds allocated for the maintenance of Ukrainian POWs before an official inspection on September 1.[8] The Ukrainian Office of the General Prosecutor reported that the explosion killed at least 40 and wounded 130 Ukrainian POWs.[9]

ISW is unable to assess the nature of the event or the party responsible for it with any confidence at this time.  We will update our assessment as more information becomes available. 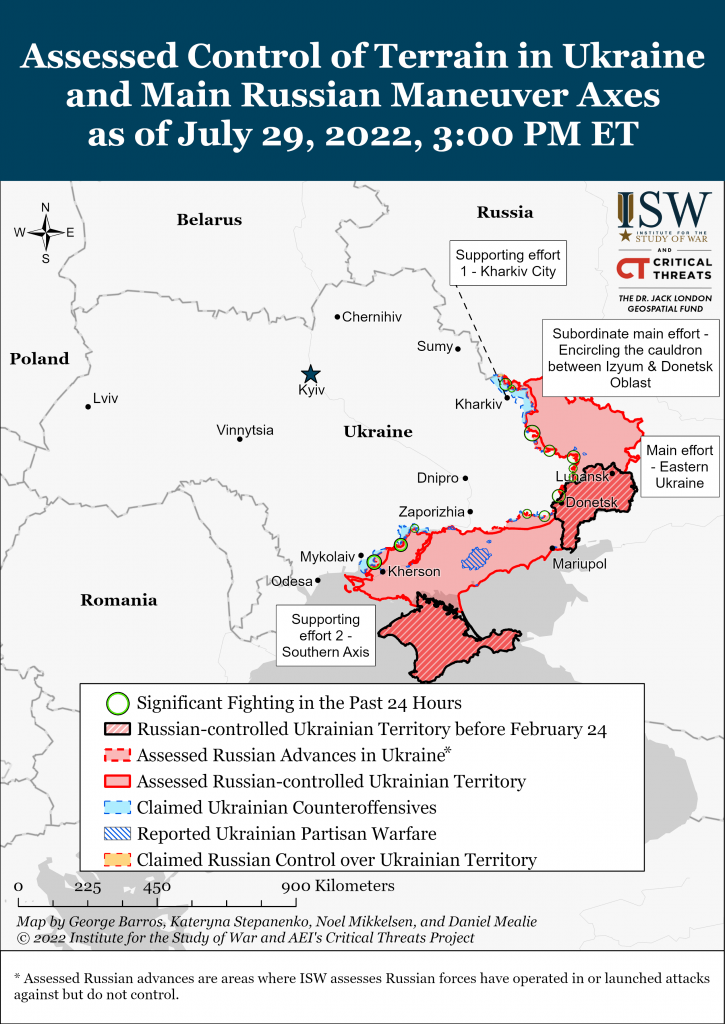 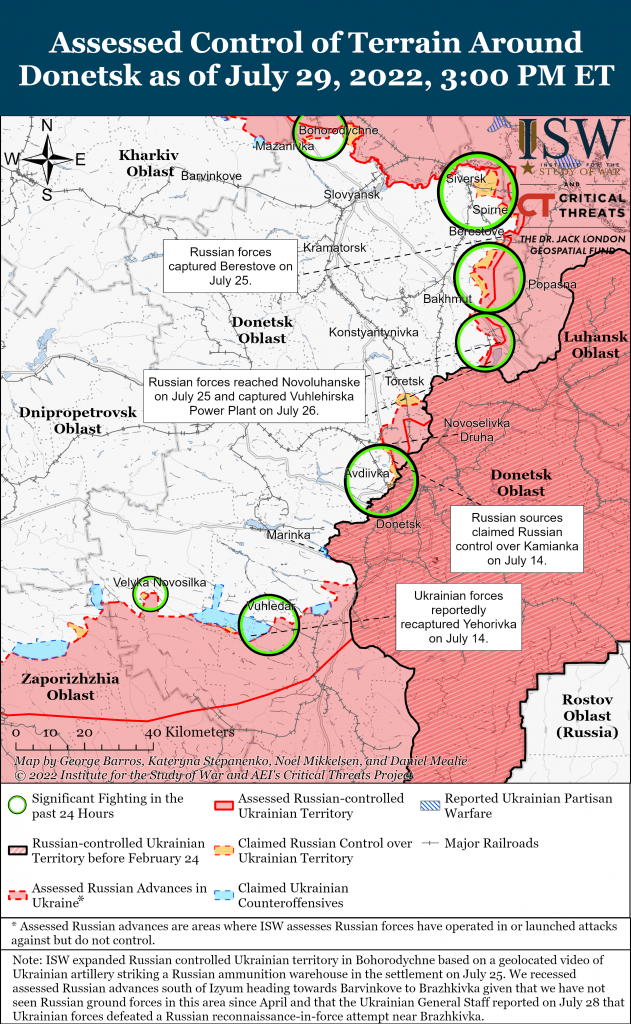 Russian forces also continued to shell settlements near the Kharkiv-Donetsk Oblast border and struck Dolyna, Bohorodychne, Kurulka, Virnopillya, and Mazanivka.[13] Russian forces additionally shelled Slovyansk and conducted a rocket strike on Kramatorsk on the night of July 28 to 29.[14]

Russian forces conducted a limited ground attack east of Siversk on July 29. The Ukrainian General Staff stated that Ukrainian troops prevented a Russian reconnaissance group from advancing near Verkhnokamyanske, 5km due east of Siversk.[15] Russian forces also continued to conduct air and artillery strikes on Siversk and its surroundings.[16]

Russian forces escalated ground attacks on the northwestern outskirts of Donetsk City on July 29. The Ukrainian General Staff reported that Russian forces conducted ground assaults near Avdiivka, Kamyanka, Krasnohorivka, Vodyane, and Pisky, all north and northwest of Donetsk City.[20] The Donetsk People’s Republic (DNR) militia claimed that Russian and DNR forces in the Avdiivka area have made unspecified but significant advances north and east of the settlement.[21] Russian forces additionally maintained constant artillery pressure along the Avdiivka-Donetsk City line of contact.[22] Russian forces are likely re-engaging in offensive operations around Avdiivka to expand the defensive pocket around the northwestern sector of Donetsk City, as ISW assessed on July 28.[23] 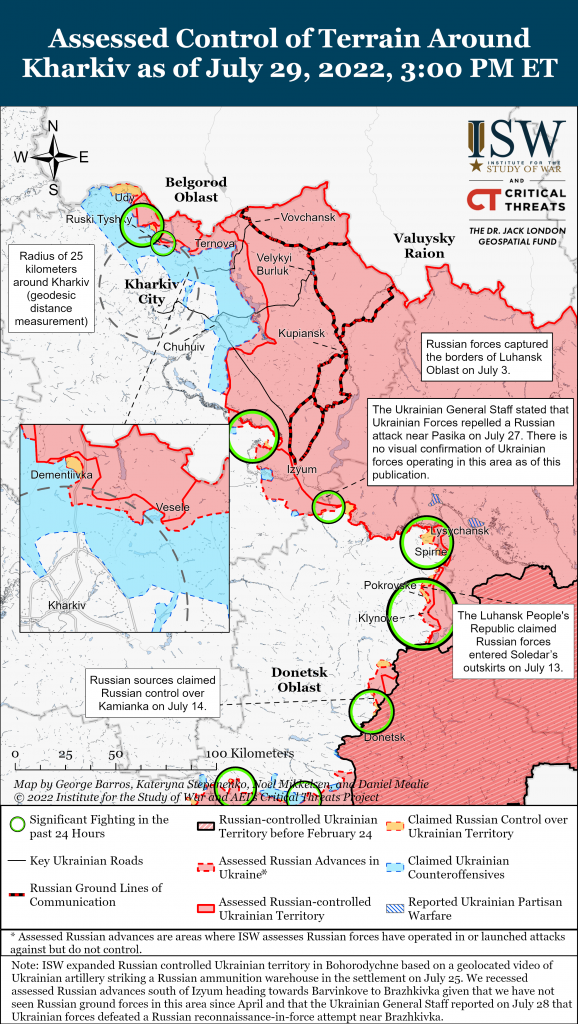 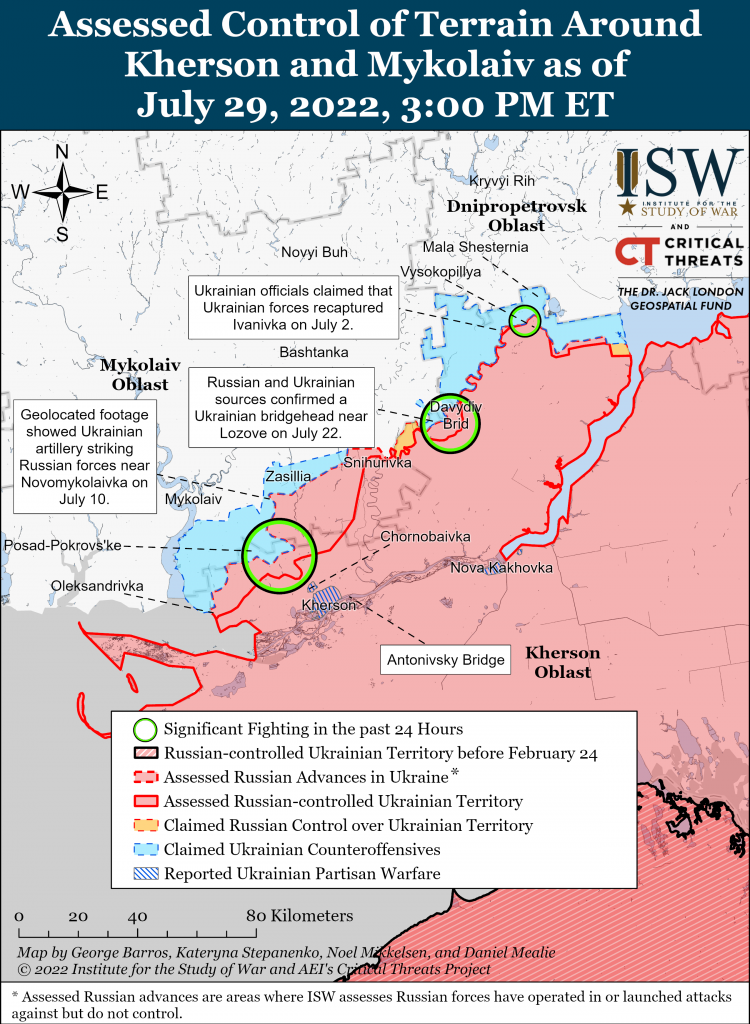 Russian regional outlets reported the recruitment and establishment of additional volunteer battalions within Russian federal subjects (regions). Buryatia Regional Administration Deputy Chairman Pyotr Mordovskoy noted that the Republic of Buryatia authorized a one-time payment of 100,000 rubles (approximately $1,600) to all recruits for the “Baikal” volunteer battalion on July 13.[38] The Republic of Buryatia is currently recruiting men with at least a middle school education to join the battalion. The local outlet ”Taiga Info” reported that on July 11, Novosibirsk Oblast Governor Andrey Travnikov ordered the formation of a reserve battalion for participation in the ”special operation,” but did not mention deployment to Ukraine.[39] The order requested that Oktyabrskiy District (one of the districts within Novosibirsk Oblast) recruit 37 reservists, which may indicate that the Oblast is recruiting reservists rather than volunteers without prior military experience.[40] Taiga Info has previously reported that the leadership of an unspecified Novosibirsk University requested information about employees’ military identity cards regardless of sex or age in late May, which may indicate ongoing Oblast-wide recruitment of reservists[41]

Russian occupation officials are promoting an organization entitled “We Are Together with Russia” throughout occupied Ukrainian oblasts, likely to present the façade of a “grassroots” call for the Russian annexation of occupied Ukraine and to prepare for falsified annexation referenda in occupied areas. Russian occupation official Vladimir Rogin told the Russian outlet “Ruskiy Mir” on July 27 that “the movement will turn into an effective platform that will speed up the process of the region’s entry into Russia.”[45] Russian Telegram news channel “Readovka” reported on July 26 that members of United Russia, the political party of Russian President Vladimir Putin, and members of the All-Russian Popular Front party are staffing the organization’s headquarters across occupied Ukrainian oblasts.[46] The Russian governor of Russia’s Penza Oblast, senior United Russia member Oleg Melnichenko, opened a “humanitarian office” for “We Are Together with Russia” in Tokmak, Zaporizhia Oblast on July 29.[47]

The possibility of a Ukrainian counteroffensive into occupied Kherson may be disrupting Russian attempts to prepare for annexation referenda and to force Kherson civilians to register for Russian passports. The Ukrainian Resistance Center reported on July 29 that occupation authorities from United Russia have left Kherson City as of July 29.[48] The Center claimed that the party members were preparing for an annexation referendum in the city under the guise of “humanitarian activities” and were forcing Ukrainian civilians to register for Russian passports in exchange for humanitarian aid. The Center reported that the party members fled because they are afraid of a Ukrainian counteroffensive in the city following the July 26 strike on the Antonivky Bridge. ISW could not corroborate the Ukrainian Resistance Center’s report. However, Russian milblogger Yuri Kotyenok and pro-Russian outlet “KhersonLife” reported on July 29 that occupation authorities are holding a large-scale “public forum” under the umbrella of “We Are Together with Russia” in Kherson City on July 30 and 31 to proclaim “the return of the right to self-determination and a new historical destiny for the inhabitants of Southern Russia,” which is how some Russian sources have begun to refer to Ukraine’s Kherson Oblast.[49] Russian sources claimed that more than 500 delegates would participate. Cancellation of, postponement of, or low turnout at this event would suggest that United Russia members have in fact fled the city in anticipation of a Ukrainian counteroffensive.

Occupation officials also continued to restrict usage of Ukrainian currency and are attempting to force the rubleization of occupied areas but may have limited access to rubles in cash. Luhansk Oblast Administration Head Serhiy Haidai said on July 29 that Russian occupation forces have not installed or serviced any ATMs in Kreminna, Rubizhne, or Popasna since taking those cities in May and that the situation is similar in Severodonetsk and Lysychansk.[50] Haidai said that Russian occupiers are trying to issue cash pensions to civilians in occupied areas but can only provide pensions by mail.