The Russian grouping in Donetsk Oblast is likely seeking to capitalize on recent marginal gains southeast of Bakhmut by continuing to attempt to advance in that area. Russian forces may be de-emphasizing attempts to take Siversk in order to concentrate on Bakhmut, but it is too soon to tell. Russian forces continued efforts to advance northward on Bakhmut from recently gained positions around Novoluhanske and the Vuhlehirska Power Plant while pursuing southwestward advances along the T1302 highway from recently captured positions in Berestove. By contrast, Russian forces have been struggling to make concrete gains around Siversk and have not made any confirmed advances toward the city since the capture of the Luhansk Oblast Administrative border in early July. Russian command is likely, therefore, seeking to maintain momentum around Bakhmut, potentially at the expense of continued pressure on Siversk. Russian forces remain unlikely to take Bakhmut itself, despite recent incremental advances in its direction.

Putin replaced Colonel-General Gennady Zhidko as deputy defense minister and head of the Main Military-Political Directorate on July 28.[1] Putin signed a decree appointing Colonel-General Viktor Goremykin to Zhidko’s position and has not publicly announced the appointment of Zhidko to a new position.[2] ISW previously reported that Zhidko would become the overall commander of Russian forces in Ukraine, a report that appears to have been incorrect.[3] 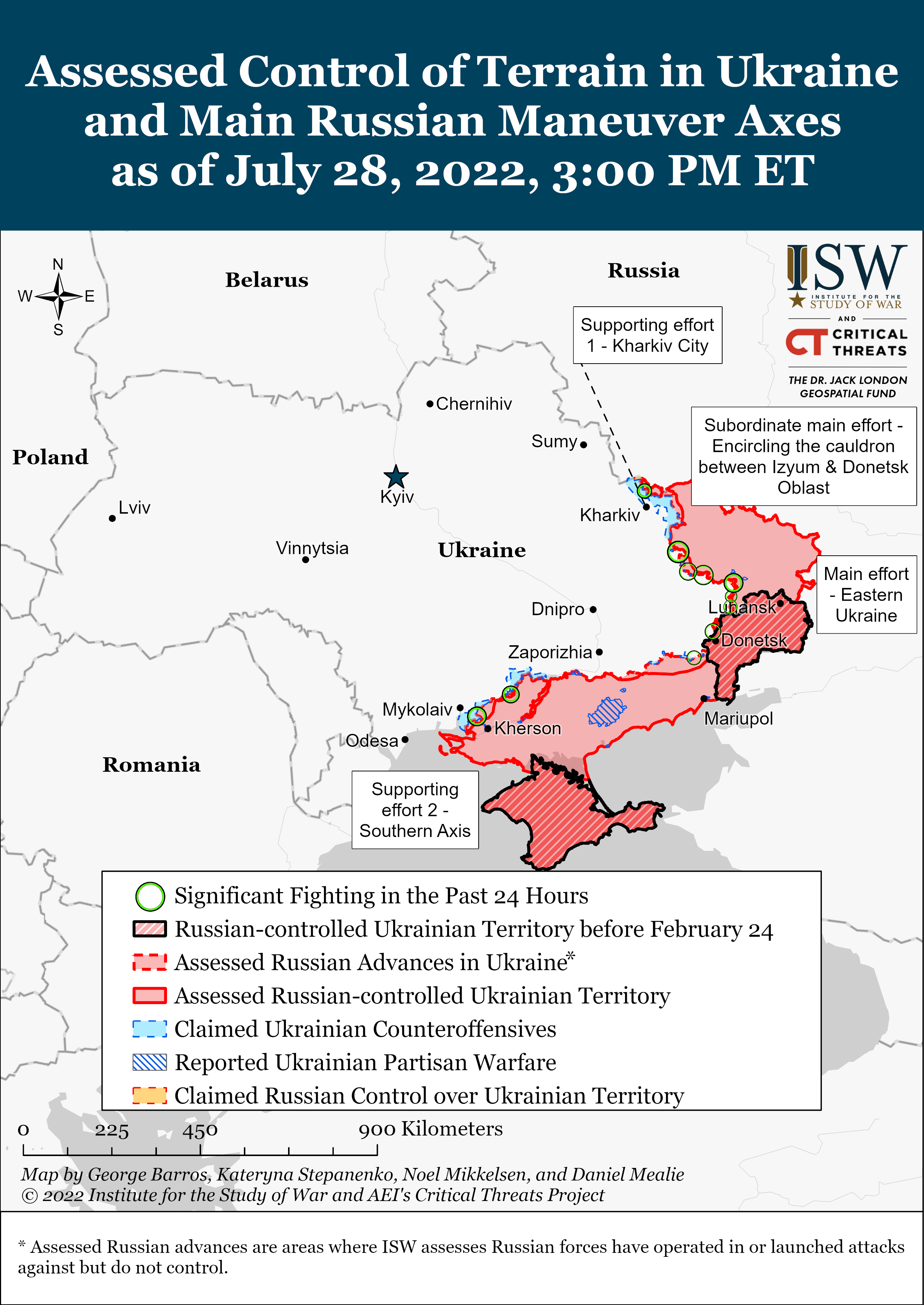 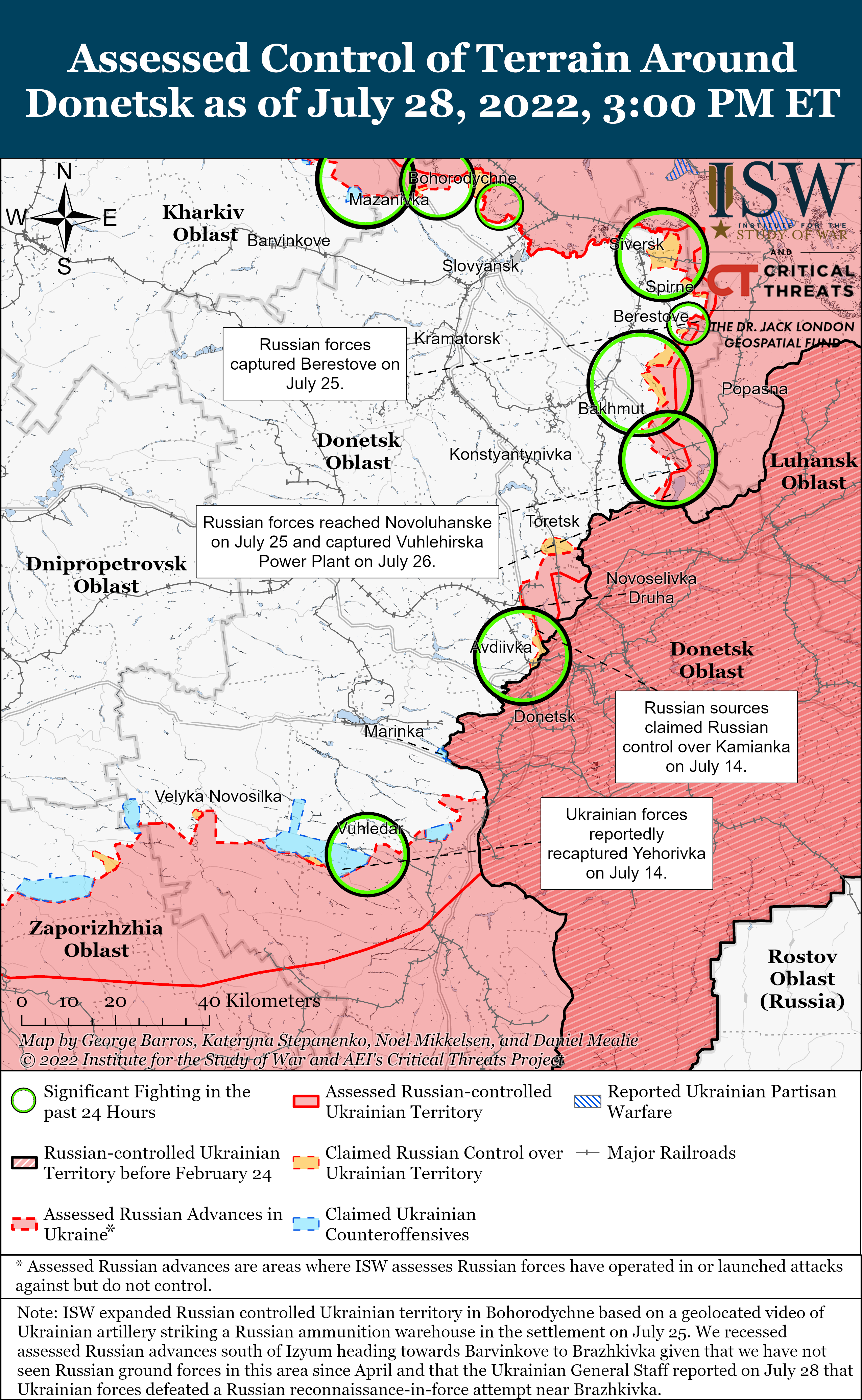 Russian forces did not conduct any confirmed ground attacks in the Siversk area and Ukrainian positions around Siversk City on July 28.[8]

Russian forces may be intensifying offensive operations in the Avdiivka area to reduce Ukrainian strikes on the Donetsk City area. Deputy Head of the Ukrainian General Staff’s Main Operational Directorate Oleksii Gromov stated that Russian forces are deploying elements of the 2nd Army Corps (forces of the Luhansk People’s Republic) and other unspecified formations to the Avdiivka area to form offensive groups, which suggests that Russian forces may be increasingly interested in committing combat power to assaults on Avdiivka.[13] The Ukrainian General Staff noted that Russian forces resumed assault operations in the direction of Avdiivka and Pisky, just southwest of Avdiivka.[14] Multiple Russian sources reported that Russian troops are increasing artillery pressure on Avdiivka in order to support more serious ground attacks against Ukrainian lines of defense surrounding the city.[15] Russian milbloggers are progressively emphasizing the increase in the pace of operations in the Avdiivka area and claiming that Ukrainian forces are using positions around Avdiivka to target Russian positions in Donetsk City.[16] This recent Russian push is likely premised on extending the Russian defensive pocket around Avdiivka and pushing Ukrainian forces out of fortified positions that have existed since 2014 in order to relieve pressure against Russian assets in Donetsk City. This push likely does not indicate that Russian forces are opening up a new offensive in the southwestern sector of Donetsk Oblast intended to drive far into the oblast.

Russian forces did not make any territorial gains on the Kharkiv Axis on July 28 but may be setting conditions for renewed offensive operations in the Kharkiv City direction. The Derhachi City Council reported that Ukrainian and Russian forces continued fighting in Kozacha Lopan, Tsupivka, Dementiivka, and Velyki Prokhody, north of Kharkiv City.[17] Russian Telegram channel Rybar claimed that Russian forces conducted successful raids on Ukrainian positions near Borshchova, Sosnivka, and Petrivka, which could later enable Russian forces to advance on Kharkiv City from the Ruska Lozova salient to Borshchova, approximately 28 km northeast of Kharkiv City.[18] Russian forces launched an airstrike near Rusky Tyshki, approximately 25 km north of Kharkiv City, and continued launching tube and rocket artillery strikes at Kharkiv City and settlements to the north, northeast, and southeast.[19] Successful Russian offensive operations in Kharkiv are extremely unlikely, but the Russians will likely try to gain more ground in the oblast before the September referenda. 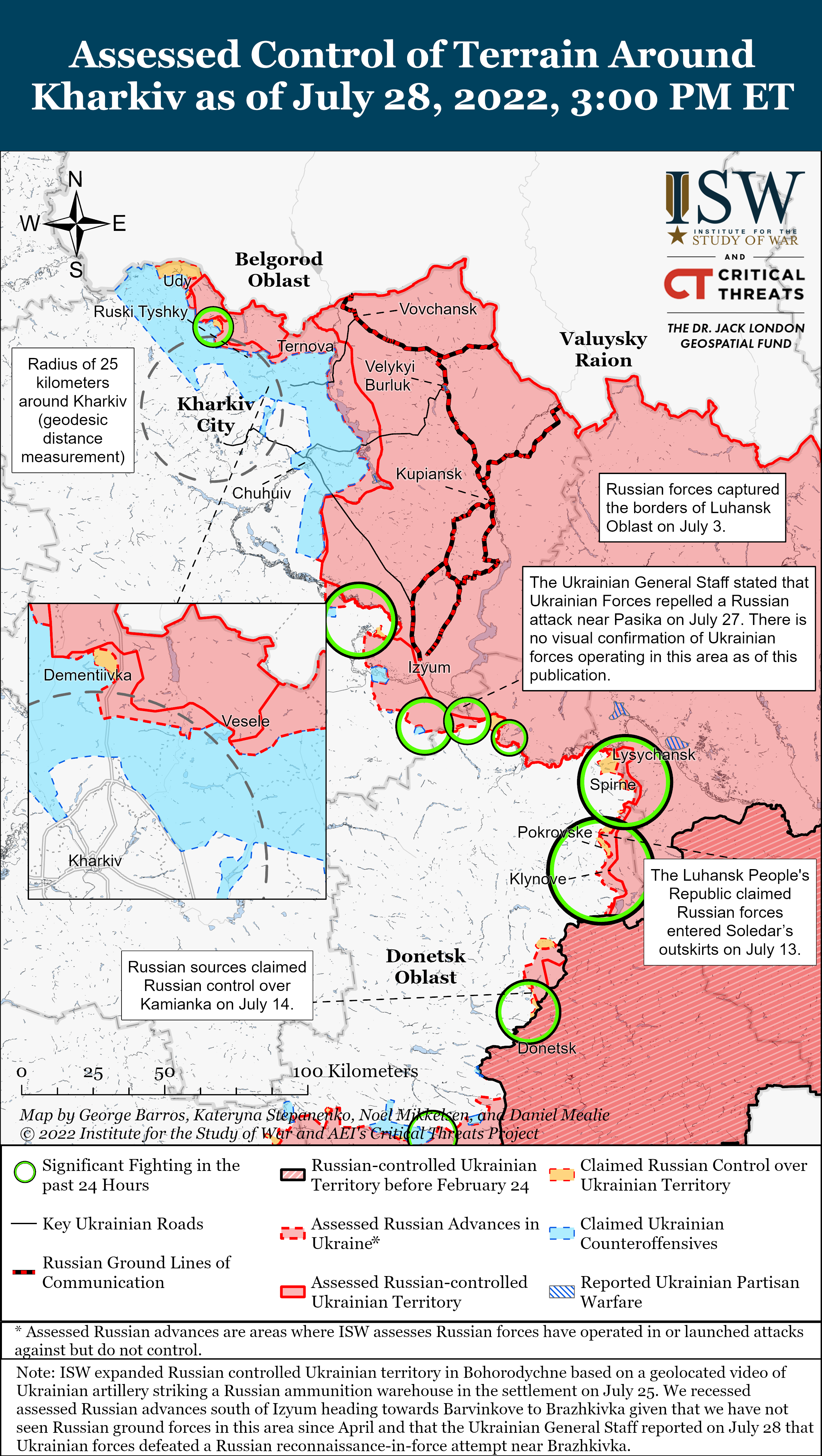 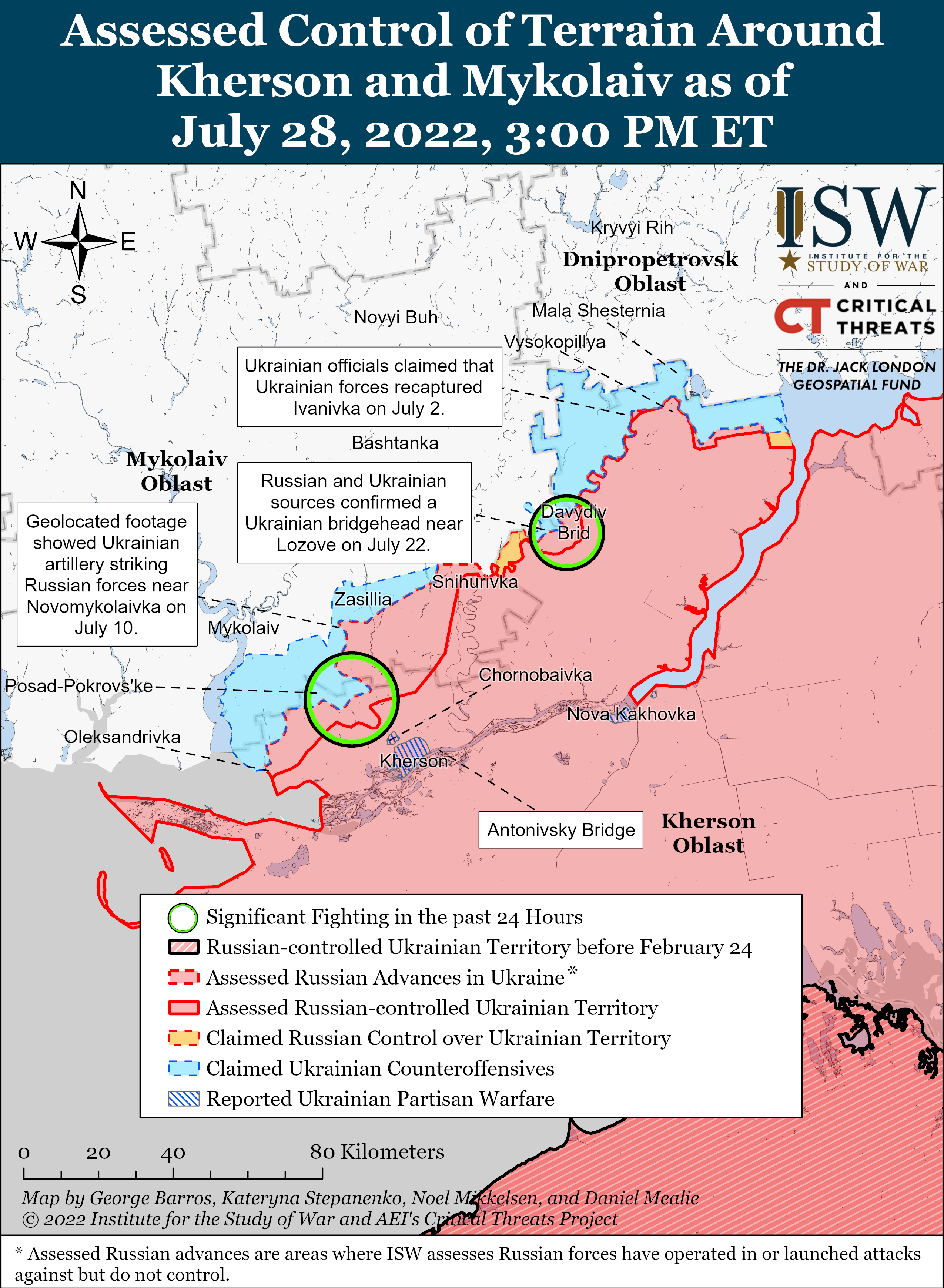 Russian forces are attempting to preserve their ground lines of communication over the Dnipro River connecting Kherson City to rear areas in eastern Kherson Oblast. Russian forces established a ferry crossing under the Antonivskyi Bridge to allow passenger traffic to cross the Dnipro after Ukrainian strikes on July 27 rendered the bridge unusable.[28] Russian occupation authorities repaired the Darivka Bridge east of Kherson City enough to reopen the bridge to passenger traffic; they tore down the previously reported pontoon bridge erected after Ukrainian strikes on the bridge on July 23.[29]

Russian military authorities continued to take measures to compensate for personnel losses in Ukraine. The Ukrainian Main Intelligence Directorate (GUR) reported on July 28 that Russian military leadership has begun to assign the officer rank of junior lieutenant to non-commissioned officers (NCOs) without requisite education or experience on a widespread basis.[30] The GUR additionally reported that the Russian military leadership is forming specialized medical commissions to identify servicemembers who are faking illnesses to get out of service requirements.[31]

Russian federal subjects continued to form regionally-based volunteer battalions. Russian media outlet Bez Formata reported on July 28 that the “Bootur” battalion from Russia’s eastern Sakha Republic (also known as “Yakutia”) has been formed with 105 volunteers for deployment into Ukraine.[32] The GUR notably reported that servicemembers from eastern regions such as Yakutia are reluctant to participate in the war in Ukraine partially due to the fact that these volunteer units are not formed on a professional basis.[33] ISW has updated the map of volunteer battalions to reflect developments in the Sakha Republic.

The Kremlin is continuing to leverage private military companies (PMCs) to support operations in Ukraine. Commander of US Africa Command (AFRICOM) General Stephen Townsend stated on July 27 that the Wagner Group PMC has transferred an unspecified number of forces from Libya to fight in Ukraine.[34] The Kremlin is increasingly relying on the Wagner Group as its premier strike group and Wagner Group leadership likely seeks to maintain its presence in Ukraine (and by extension, its positive perception with Russian military leadership) through importing fighters from other areas of operation.[35]

The Kremlin is continuing to institutionalize its occupation administrations in occupied parts of Ukraine to prepare for sham referenda, annexation, and integration into Russia. Russian Senator Andrei Klishas said on July 28 that he “fully admits” that the primary objective of the autumn session of the Russian Duma will be “the integration of new territories into the legal space of the Russian Federation.”[36] The autumn session is scheduled to begin on September 12, one day after the most likely date for sham annexation plebiscites to be held in occupied territories. In the meantime, the Russian Ministry of Internal Affairs (MVD) announced on July 28 that it has created “temporary departments” and deployed MVD employees to occupied Kherson and Zaporizhia oblasts to support occupation authorities in “ensuring order on the streets,” assisting in the formation of local police departments, conducting operational-search activities, fighting extremism, and assisting in the “permanent issuance” of Russian passports.[37] The Kremlin has likely been unable to recruit many Ukrainians to enforce occupation laws and combat resistance efforts in occupied territories.

Russian occupation forces are continuing to pressure Ukrainian civilians in occupied areas to use Russian rubles and passports instead of Ukrainian hryvnias and identification documents. Acting Ukrainian Head of Kherson Oblast Dmytro Butrii said on July 28 that Russian occupation forces have banned the use of the hryvnia in Kherson and that occupation police are patrolling local markets to threaten and punish those using hryvnias.[38] Butrii also reported that occupation officials have begun to remove ATMs from local markets, suggesting that the Kremlin may be attempting to not only eliminate the use of the hryvnia, but also limit cash access to civilians who cooperate with the occupation administration. The Kremlin could also attempt to drive occupied areas toward a cashless (and therefore more trackable) economy. Russian milblogger Boris Rozhin claimed that 10% of Zaporizhia Oblast residents had received or were in the process of receiving Russian passports as of July 28.[39] He also claimed that passportization is underway in occupied parts of Kharkiv Oblast and claimed that the slow formation of Kharkiv occupation administration accounts for the low percentage of Kharkiv residents in the passport process so far.

Russian occupation authorities are also advancing their efforts to influence schools and curricula in occupied territories in the face of some Ukrainian resistance. Ukrainian Mayor of Melitopol Ivan Fedorov claimed that all Zaporizhia Oblast school leaders have refused to cooperate with occupation authorities as of July 28.[40] Fedorov said that occupation officials have decided to consolidate four unspecified universities in occupied areas down to one and that 2,000 students would return at an unspecified date, compared to peacetime university attendance of 14,000 students in the oblast. Russian Zaporizhia Occupation Administration Head Yevheny Balitsky claimed on July 28 that his agenda for a meeting with senior occupation officials included not only discussions of price controls, social payments, and the annexation referendum, but also preparation for the new academic year, demonstrating the degree to which occupation officials are prioritizing control over Ukrainian education in occupied territories.[41]

Ukrainian advisor to the mayor of Mariupol Petro Andryushchenko reported that Ukrainian teachers from Donetsk and Mariupol completed a pre-certification course for “knowledge and teaching of Russian propaganda” to children in occupied territories. Occupation officials likely brought in Russian specialists to reform Ukrainian curriculums and may be forcing Ukrainian teachers who hope to keep their jobs to re-certify their educational credentials to match Russian standards and curricula. Evacuees from near Mariupol told NPR on July 9 that Russian forces threatened to take children from their parents if they did not attend schools with Russian teachers, suggesting that children in occupied areas will be largely forced to attend Russian-controlled educational institutions.[42] That Russian effort is one component of the Kremlin campaign to set conditions for longer-term Russian social control throughout occupied parts of Ukraine.