Russian forces appear able to sustain only two significant offensive operations in Ukraine at this time, one attempting to seize Siversk and the other advancing on Bakhmut. These operations have focused on advances in the Siversk, Donetsk Oblast, direction from Verkhnokamianka and Bilohorivka and in the Bakhmut direction from the areas of Novoluhanske and the Vuhlehirska Thermal Power Plant since the end of the operational pause on July 16.[1] Russian forces have committed enough resources to conduct near-daily ground assaults and to seize territory on these two axes but have been unable to sustain a similar offensive operational tempo or to make similar territorial gains elsewhere in Ukraine. The Russian offensive, therefore, remains likely to culminate before seizing any other major urban areas in Ukraine. 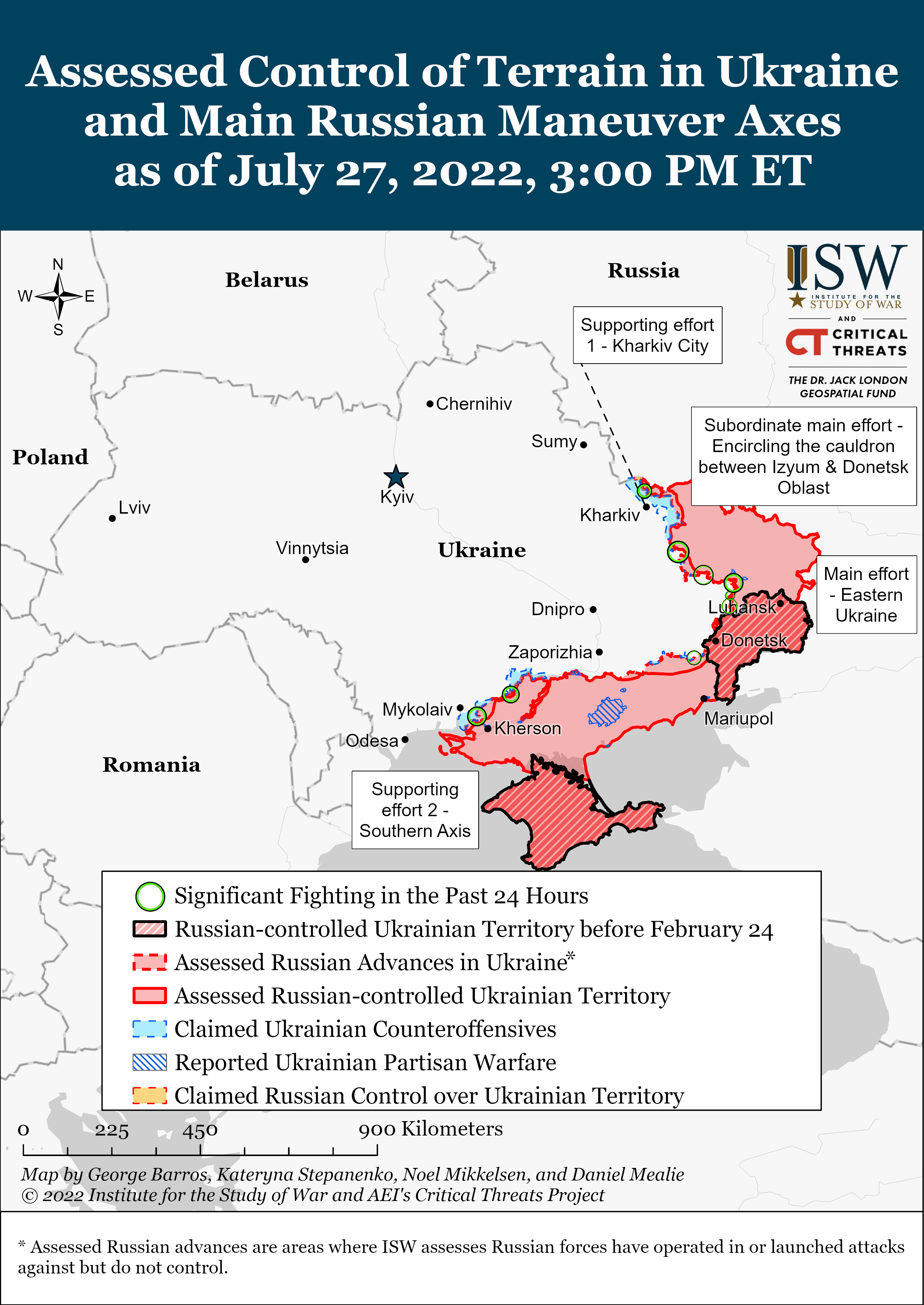 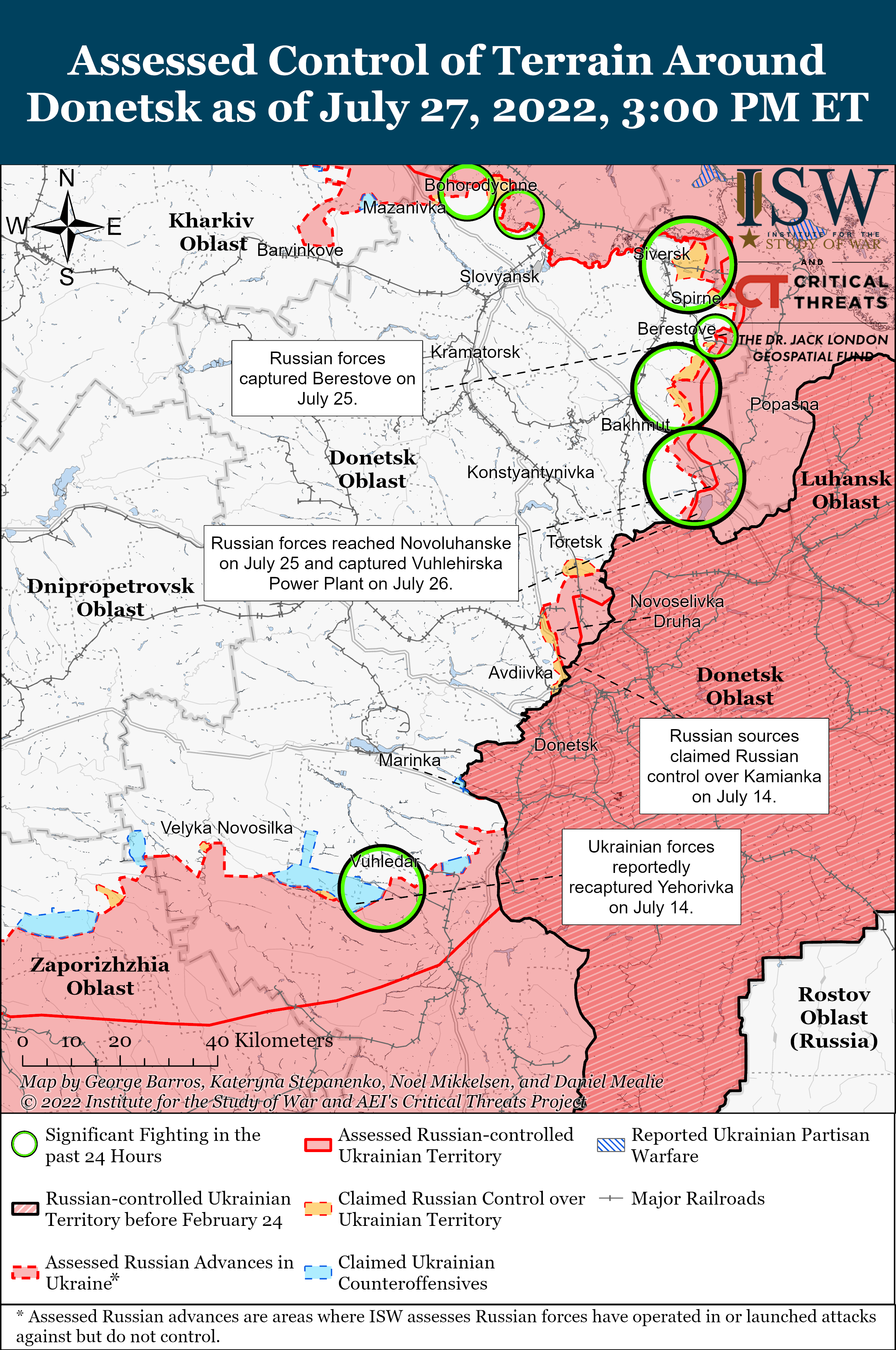 Russian forces did not conduct offensive operations around Avdiivka or near the Donetsk-Zaporizhia Oblast border on July 27.[16] LNR Interior Minister Vitaly Kiselev maintained that Russian forces began an assault on Avdiivka, however.[17] 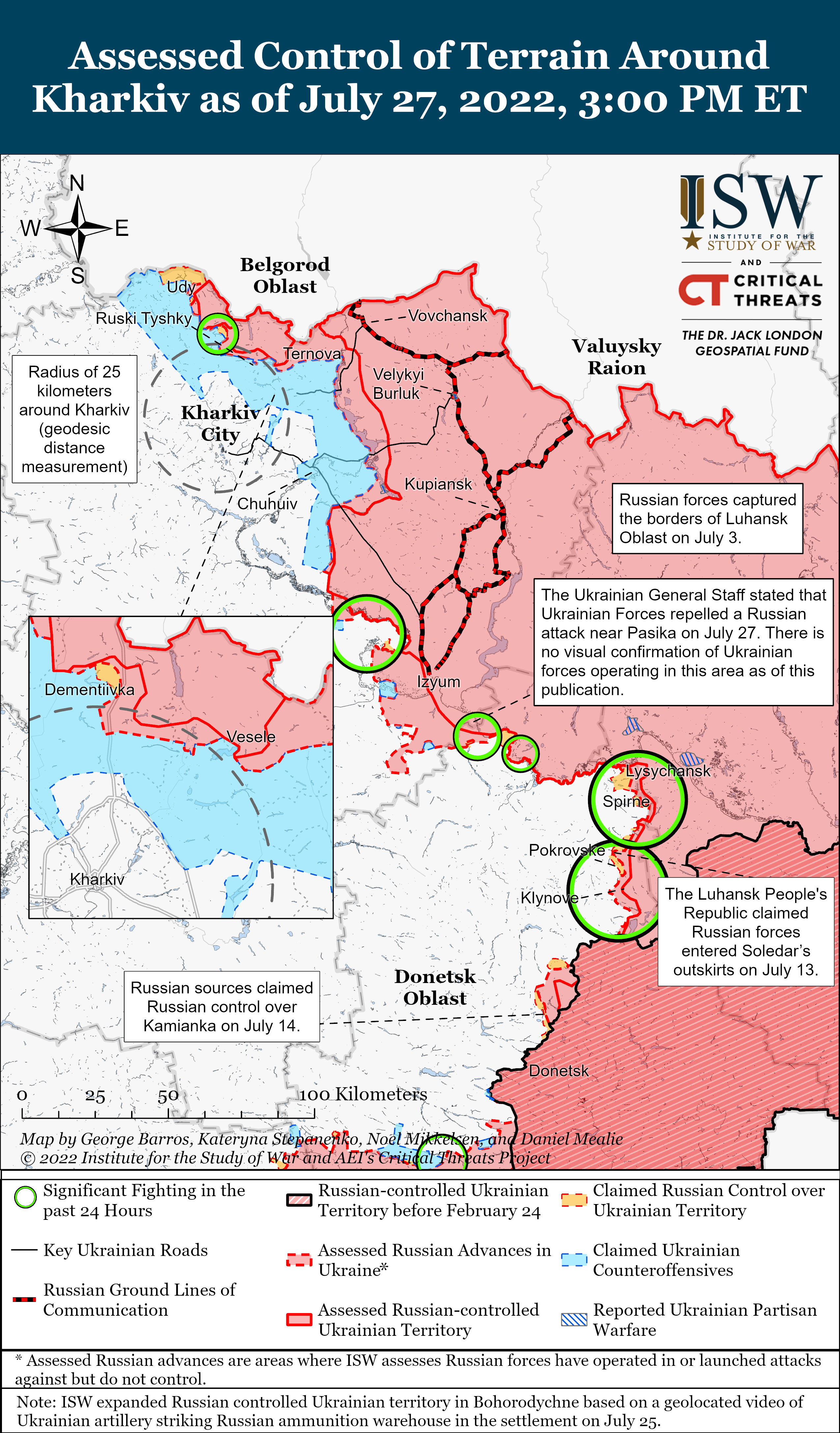 Ukrainian forces struck the Russian-controlled Antonivskyi Bridge east of Kherson City overnight on July 26-27 for the third time in ten days.[22] Ukrainian forces launched eight projectiles at the Antonivskyi vehicle bridge and two projectiles at the Antonivskyi railway bridge, 6 km east up the Dnipro River from the vehicle bridge.[23] Russian-backed Kherson Oblast Administration Deputy Kirill Stremousov announced that the vehicle bridge is closed to all traffic and that the rail bridge also sustained damage.[24] Images and footage of the strike aftermath show damage across the entire width of the vehicle bridge, likely rendering the bridge inoperable.[25] The Russian Defense Ministry claimed that Russian air defense shot down ten Ukrainian Vilkha and HIMARS projectiles over Antonivka and Brilivka, likely referring to the bridge strikes, but footage of the strikes shows Russian air defense systems only activating after the Ukrainian strikes landed.[26] 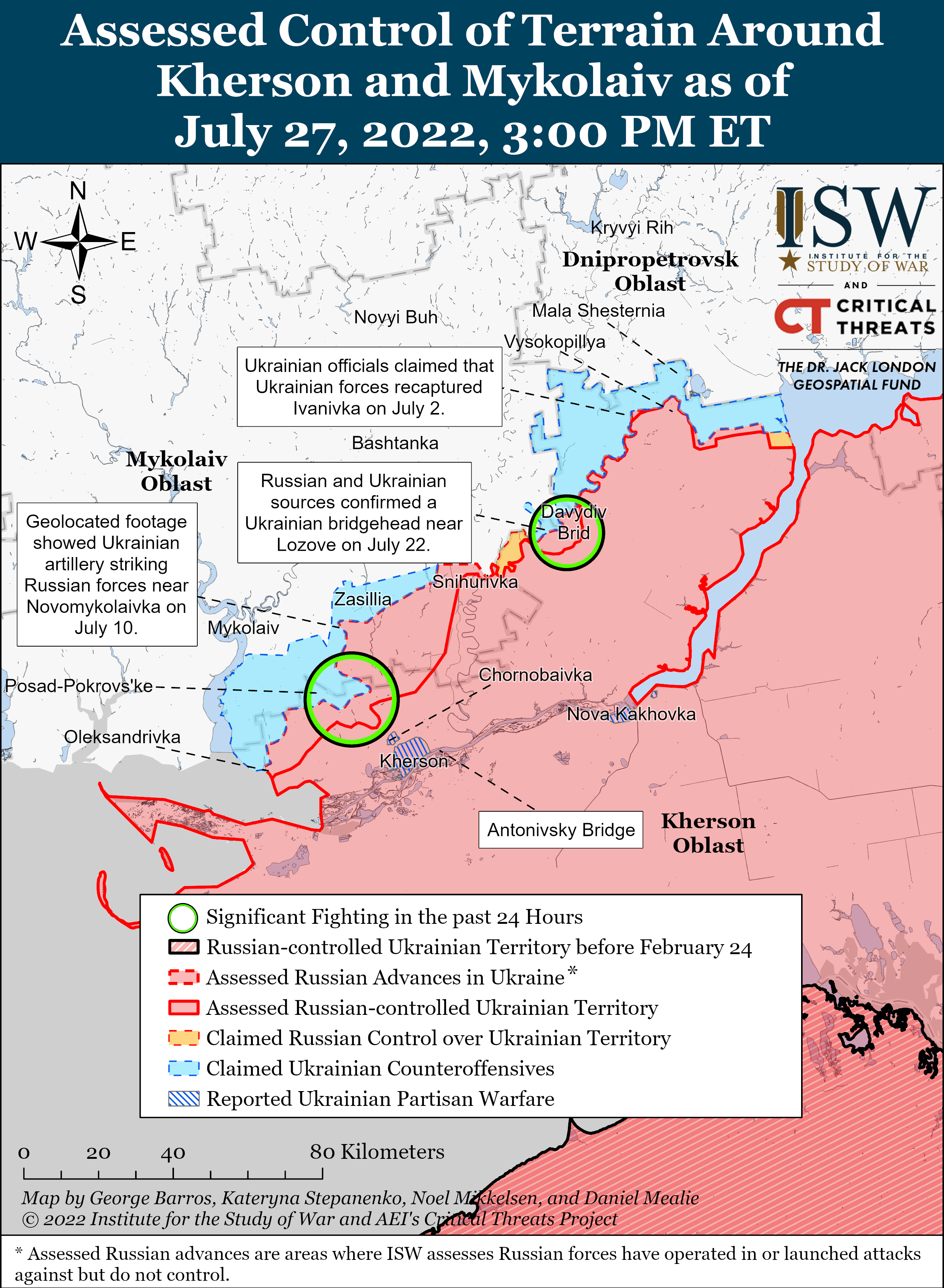 Russian federal subjects (regions) continued to establish volunteer battalions throughout Russia for deployment to Ukraine. The Mari El Republic (an ethnic republic established for the indigenous Mari people and situated north of Kazan) formed and deployed two volunteer battalions named “Iden” and “Poltysh” to training grounds on July 27 and is currently forming a third battalion named “Akpatr.”[32] Yoshkar-Ola City Administration announced the recruitment for the battalions on May 30 for any man that has completed nine grades of schooling (middle school).[33] Local media outlets reported that recruits will receive over 300,000 rubles (approximately $5,050) per month and that families may receive five million rubles (approximately $84,200) if the serviceman dies in combat.[34] Russian Telegram channel “Mozhem Obyasnit” collected statements from men and their relatives from Moscow, Kemerovo Oblast, Tyumen, and Lipetsk Oblast who reported receiving recruitment calls attempting to persuade them to enlist in the “Sobyaninskiy Polk” Moscow-based volunteer battalion.[35] Some responders reported receiving aggressive recruitment calls after signing up for public employment services, while other formerly conscripted men were falsely told that they had already signed military contracts, despite not entering the military service after their conscription period. Such a country-wide call for recruits for the “Sobyaninskiy Polk” likely indicates that Russian forces are facing challenges in recruiting personnel for the Moscow volunteer battalion. The Ukrainian Main Military Intelligence Directorate (GUR) intercepted a call with a Chechen fighter from “Vostok” (presumably the newly-formed “Vostok Akhmat”) battalion, which likely confirms that some elements of certain volunteer battalions have deployed to Ukraine.[36]

The Kremlin continues to show preference for some ethnic groups over others during the Russian invasion of Ukraine, which may spark ethnic unrest in Russia. Ukrainian Deputy Justice Minister Olena Vysotska said that the Kremlin prioritizes returning Chechen fighters in prisoner exchanges but is not as interested in exchanging personnel from the Buryatia Republic or the Far East.[37] Vysotska added that the Kremlin shows almost no consideration for the Donetsk and Luhansk People’s Republics (DNR and LNR) prisoners of war. YouTube channel “The People of Baikal” reported that Buryatia has lost at least 208 servicemen in combat as of July 1, and the channel’s criticism indicates the formation of some region and ethnicity-based opposition platforms in Russia.[38]

Ukrainians in occupied territories are refusing to collaborate with Russian occupation officials en masse, forcing the Kremlin to import Russian citizens to fulfill basic tasks. Russian officials continue to struggle to procure enough labor to reopen businesses, clear rubble, or establish occupation bureaucracies in occupied Ukrainian territory. The Ukrainian Resistance Center reported on July 26 that the three branches of the Russian Promsvyazbank failed to open as expected in Kherson Oblast because insufficient numbers of Ukrainian civilians agreed to work there—Promsvyazbank and other financial institutions are key to the Kremlin’s plans to replace the hryvnia with the ruble in occupied Ukrainian territories.[39] The Kremlin has begun to transfer Russian government officials into new roles in occupied Ukrainian oblasts; the Ukrainian Resistance Center reported on July 26 that the Kremlin appointed former Moscow Deputy Head of Criminal Investigations Department Oleg Koltunov as the head of the Zaporizhia Oblast Occupation Administration’s Ministry of Internal Affairs.[40] The Ukrainian Resistance Center also reported that Russian authorities have insufficient medical personnel in Luhansk Oblast because locals refuse to cooperate, forcing the Kremlin to import Russian doctors from Novosibirsk and Volgograd on a rotational basis.[41]

Russian occupation officials are likely leveraging food aid and other humanitarian assistance to force occupied populations to cooperate with and work for Russian occupiers. The Mariupol City Council announced on July 27 that Russian forces stopped providing humanitarian assistance to Mariupol residents to force residents to demine and clear rubble on behalf of the occupation administration in exchange for food, as ISW forecasted in June.[42]

Russian occupation officials are additionally continuing to mobilize faux grassroots movements to set conditions for a falsified referendum on the Russian annexation of occupied territories. The Ukrainian Resistance Center reported on July 26 that Russian public relations specialists and political technologists have deployed to occupied Melitopol.[43] The center reported that their first objective is to create a public movement called “We Are Together with Russia” to rally in support of the falsified referendum that occupation officials likely aim to hold as soon as September. The GUR reported on July 26 that occupation forces released a 14-page booklet for pro-Russian supporters and collaborators in Ukraine entitled “Handbook for Ukrainian Citizens on Organizing Resistance to the Kyiv Puppet Government.”[44] The guide advises pro-Russian Ukrainians to disrupt general societal functioning in many ways, including by giving confusing and illogical answers when asked for advice, conducting Ukrainian conversations slowly to force the interlocutor to offer to switch to Russian, inserting anecdotes to distract from decision-making conversations, not reporting signs of corruption, using extra medicine, creating superfluous documents and requests, and spending more time in the bathroom at work.[45]