Russian-backed proxy leadership continues to enunciate deadlines for the capture of additional Ukrainian territory, likely to support ongoing preparations for referenda on the annexation of these territories to the Russian Federation. Donetsk People’s Republic (DNR) Deputy Minister of Information Daniil Bezsonov stated on July 25 that the DNR expects to capture the entirety of Donetsk Oblast by the end of August.[1] Various Russian and Western sources have previously reported that Russia intends to hold referenda in occupied areas by the first half of September, likely sometime around September 11, which is the unified voting day in the Russian Federation.[2] Proxy leadership and Russian-backed occupation authorities are likely pushing for deadlines for military objectives to support condition setting for expedited annexation objectives, although Russian forces remain unlikely to occupy significant additional territory in Ukraine before the early autumn annexation timeline. 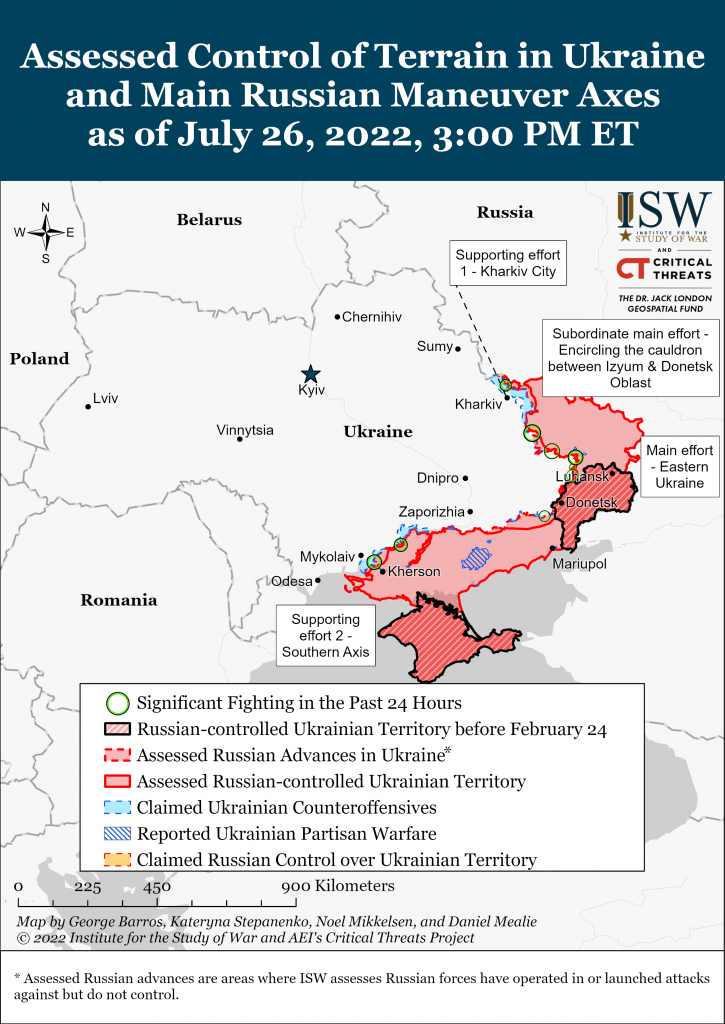 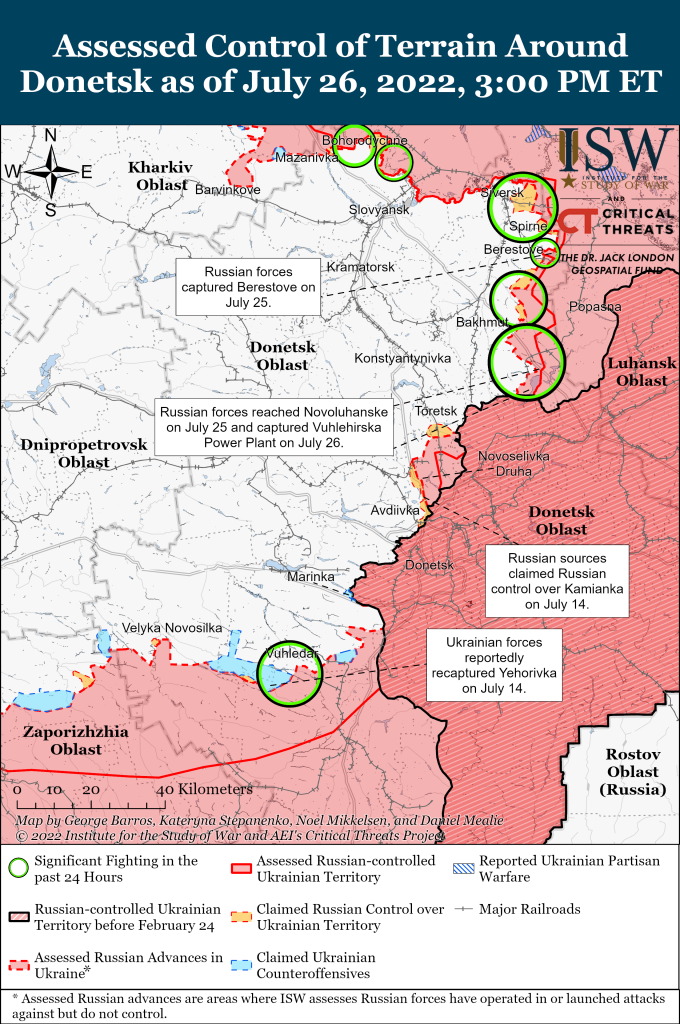 The Ukrainian General Staff additionally claimed that Ukrainian forces repelled Russian assaults in the area of the Sviati Hory National Nature Park, about 20 km northeast of Slovyansk.[6] The Sviati Hory park is bounded by the eastern bank of the Siverskyi Donets River, and it is unlikely that Russian forces have yet made it across the river and are advancing southwest toward Slovyansk. The language of the General Staff report is vague and may suggest that:

ISW will continue to monitor developments and potential directions of Russian advances from the Sviati Hory area.

Russian forces made incremental gains northeast of Bakhmut between July 25 and 26. Geolocated footage posted by a Russian soldier walking freely along a very damaged segment of the T1302 Bakhmut-Lysychansk highway in Berestove (25 km northeast of Bakhmut) shows that Russian forces took control of Berestove on July 25.[7] The footage shows that Berestove has been essentially leveled by Russian artillery and is completely abandoned, which suggests that Ukrainian troops may have conducted a controlled withdrawal from the area. Russian forces will likely leverage this position to move southwest along the T1302 towards Soledar and attempt to assault Bakhmut from the Berestove-Soledar line. Russian forces are also fighting near Soledar itself.[8]

Russian forces continued to fight south of Bakhmut on July 26. Several Russian sources posted further confirmation that Russian forces, including Wagner Group mercenaries, have taken control of the Vuhlehirska Power Plant (also sometimes referred to as the Vuhledar Power Plant) about 25 km southeast of Bakhmut.[9] The Ukrainian General Staff stated that Russian forces are fighting in Semihirya (just northwest of the Vuhlehirska Power Plant).[10] ISW assessed on July 25 that Ukrainian troops likely conducted a controlled withdrawal from the power plant to Semihirya, and Russian forces will likely continue measured attempts to push north of the territory of the plant towards Bakhmut.

Russian forces conducted limited ground attacks southwest of Donetsk City on July 26. The Ukrainian General Staff reported that Russian forces attempted to assault Blahodatne and Pavlivka, both about 45 km southwest of Donetsk City.[11] Blahodatne is within ISW-assessed Russian-controlled territory, and the Ukrainian General Staff’s report on an attack in its vicinity may suggest that Ukrainian troops have conducted limited counterattacks near Blahodatne as they have around Pavlivka. Russian troops additionally continued to focus offensive operations in the direction of Avdiivka and fired along the Avdiivka-Donetsk City line of contact.[12] 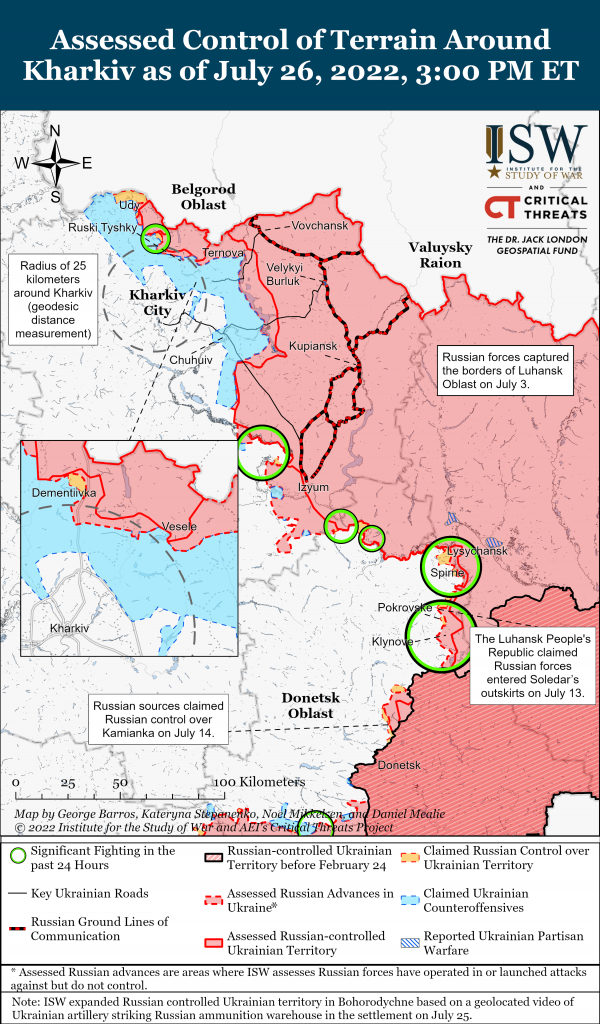 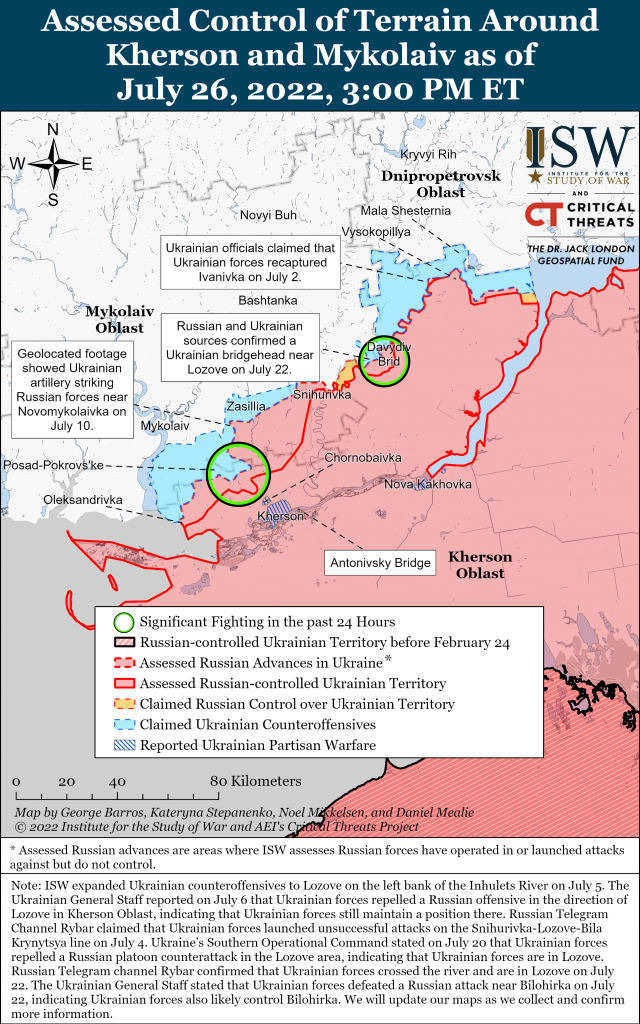 Russian forces continued to focus on defending their occupied positions and attempted a limited unsuccessful assault in northwestern Kherson Oblast. The Ukrainian Southern Operational Command reported that Russian forces made another unsuccessful attempt to advance from occupied Ishchenka to Bilohirka on July 25, likely in an effort to push back Ukrainian positions on the eastern Inhulets Riverbank.[20] Russian forces also carried out air and missile strikes on settlements around the Ukrainian bridgehead over the Inhulets River.[21]

Russian forces are likely training volunteer battalions from different regions in select training camps due to lack of military trainers. Chechen leader Ramzan Kadyrov reported that recruits from various Russian regions undergo accelerated training in the SPETSNAZ University in Chechnya and published footage of unspecified Chechen fighters deploying to Donbas from the Grozny Airport on July 25.[29] Kadyrov has previously reported on the deployment of unspecified volunteer elements throughout July, and Chechen units will likely deploy to Ukraine in smaller groups rather than fully assembled battalions due to limited training capacity at the SPETSNAZ University.[30]

Ukrainian intelligence leaks continue to detail Kremlin plans to annex occupied Ukrainian territory into Russia via falsified referenda. The Ukrainian Security Service (SBU) reported on July 26 that Russian officials plan to rely on activist members of the “Donetsk Republic” organization to advocate for an accession referendum and to mobilize voters across occupied Ukrainian territory in Donetsk, Luhansk, Zaporizhia, and Kherson Oblasts.[31] The Donetsk Republic organization is a Russian proxy precursor to the governance structures of the Donetsk People’s Republic that has advocated for Russian annexation of Donbas since 2005. The SBU reported that the organization will likely rename itself “Greater Russia” and will advocate for the Russian annexation not just of Donbas, but of all of occupied Ukraine, demonstrating the Kremlin’s ever-expanding territorial objectives. Ukrainian intelligence leaked t-shirt designs showing a unified outline of Russia and Ukraine that also includes the US state of Alaska as part of “Greater Russia.” Ukrainian intelligence also leaked pre-drafted letters, ostensibly by members of the organization, appealing to DNR Head Denis Pushilin to hold a referendum. The letters were hand-signed and dated August 1 and 9, 2022.

These future-dated documents demonstrate that the Kremlin has planned a paced information operation to support the annexation and integration of occupied Ukrainian territory into the Russian Federation. That operation has already begun. The first phases involved Russian proxies calling for Russian intervention, Russian forces taking and occupying swathes of southern and eastern Ukraine, and Russian occupation officials replacing Ukrainian identifying documents, telecommunications, currency, and local governance with Russian alternatives. Proxy officials will now continue to request annexation, citing what they will claim is a popular, grassroots campaign calling for accession referenda.

The next phase will likely involve ostensibly grassroots groups engaging or intimidating civilians in occupied areas and occupation officials increasingly tying humanitarian aid to “correct” electoral participation in annexation referenda. The SBU reported that members of the Donetsk Republic have already engaged with 200,000 citizens in occupied areas, encouraging them to join the organization and support the occupation and annexation. After releasing their “grassroots appeals” in early August and increasing their propaganda output throughout the month, the Kremlin’s proxies will most likely claim that it is the will of the people to schedule their referenda for September 11, the same day that local and gubernatorial elections are held across Russia.

The reported objectives of the “Greater Russia” organization demonstrate that the Kremlin has already developed post-annexation plans for population control as well. The group’s listed objectives include territorial integration, humanitarian aid, “support for civil initiatives on the ground,” “removal of social tension,” and “development of the economic potential of the territories.”

Repeated Ukrainian intelligence leaks of this Russian and proxy planning may force the Kremlin to alter or forgo elements of their planned annexation campaign, just as US and allied “pre-bunking” of Russian false-flag attempts forced the Kremlin to forgo many of its planned justifications for the invasion of Ukraine in February 2022. Ukrainian counteroffensives could also force a change in the Kremlin’s annexation timeline.