The current Russian offensive may secure limited additional territorial gains in Donbas northeast of the E40 highway but will likely culminate before seizing major populated areas such as Slovyansk or Bakhmut. Russian forces have not made significant advances towards Slovyansk or along the Siversk-Bakhmut salient in the past few weeks and are continuing to degrade their own offensive combat power in localized fights for small and relatively un-important settlements throughout Donetsk Oblast. Russian troops have notably been attempting to take Siversk since the capture of Lysychansk and the Luhansk Oblast border on July 3 and have still not reached the city as of July 20.[1] Similarly, Russian troops have failed to launch direct assaults on Bakhmut and have largely impaled themselves on fights for small settlements to its east and south. Efforts to advance on Slovyansk have mostly ground to a halt and have made no meaningful gains for weeks. The renewal of active ground offensives following the brief operational pause has not yet translated into meaningful Russian forward progress, although it is possible that either steady Russian pressure or the completion of Russian efforts to rebuild combat power could generate limited gains in the coming days or weeks.

Russian troops are now struggling to move across relatively sparsely-settled and open terrain.  They will encounter terrain much more conducive to the Ukrainian defenders the closer they get to the E40 around Slovyansk and Bakhmut due to the increasing population density and built-up nature of these areas (see map in-line with text). The current Russian offensive in Donbas is therefore highly likely to culminate somewhere along the E40 in the coming weeks.

[Map showing population density in Donbas as of 2020 in comparison with ISW’s assessed control of terrain in Donetsk Oblast as of July 20, 2022. Russian forces will likely face challenges taking control of the darker-grey areas, which represent more densely-populated hromadas and are largely concentrated along the E40 highway between Slovyansk and Bakhmut] 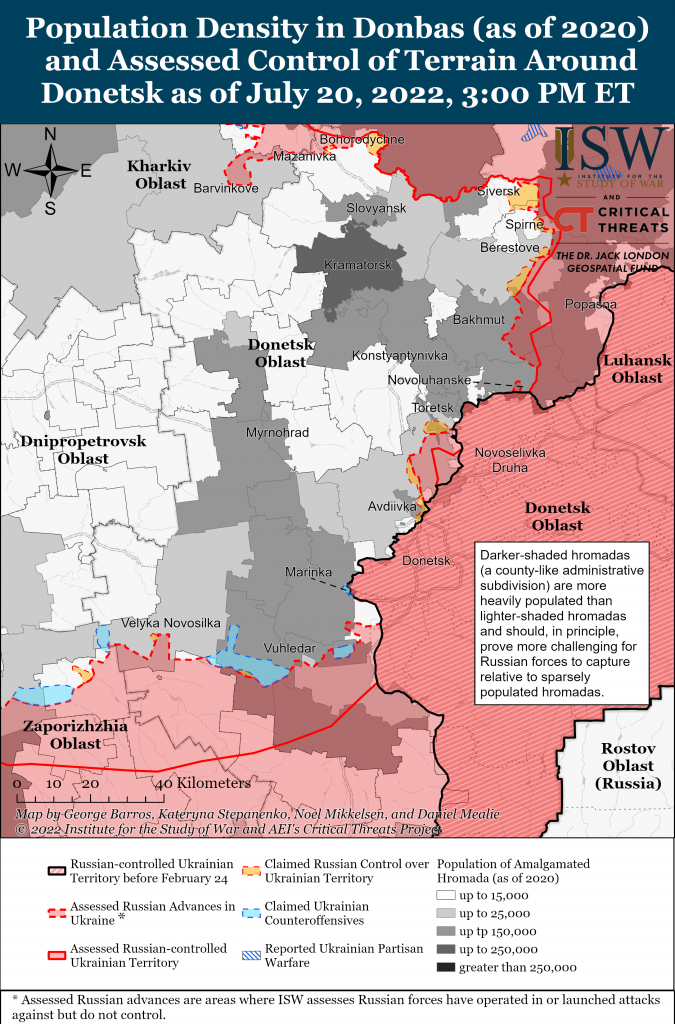 Russian Foreign Minister Sergey Lavrov articulated expanded geographical aims for Russian operations in Ukraine on July 20, confirming ISW’s long-held assessment that Russia has territorial goals beyond Donetsk and Luhansk Oblasts. Lavrov held an interview with state-owned media outlet RT’s editor-in-chief Margarita Simonyan wherein he stated that the geography of the “special operation” has changed since March and now includes not just the Luhansk and Donetsk People’s Republics, but also Kherson and Zaporizhzhia Oblasts and a number of other unspecified territories.[2] Lavrov also warned that these goals will expand if the West continues to provide Ukraine with long-range weapons. Lavrov’s calls for maximalist territorial objectives are notably divorced from the slow and grinding reality of recent Russian operations in Ukraine as discussed above. Ukrainian counteroffensive pressure is complicating Russian efforts to consolidate military control of occupied Kherson and Zaporizhzhia Oblasts, and it is unclear how the Kremlin will generate the offensive combat power needed to take significant new amounts of Ukrainian territory.

The Russians have identified commanders of the southern, central, and eastern groups of forces, corresponding to their respective military districts and oriented on Bakhmut, the Izyum area, and Siversk respectively.  They have notably failed to identify any commander of Russian forces operating in occupied southern Ukraine, however. The Russian commander of forces on the Southern Axis could be the commander of the Russian 7th Guards Mountain Airborne (VDV) Division based in Novorossiysk, Krasnodar Krai, or of the Black Sea Fleet’s 22nd Army Corps, based in Simferopol, Crimea, respectively, as there is no other obvious military district from which he might be drawn.[7]

Ukrainian troops rescued a cat during clearing operations on Snake Island and evacuated it back to the Ukrainian mainland on July 20.[8] The cat reportedly survived the duration of the Russian occupation of the island. 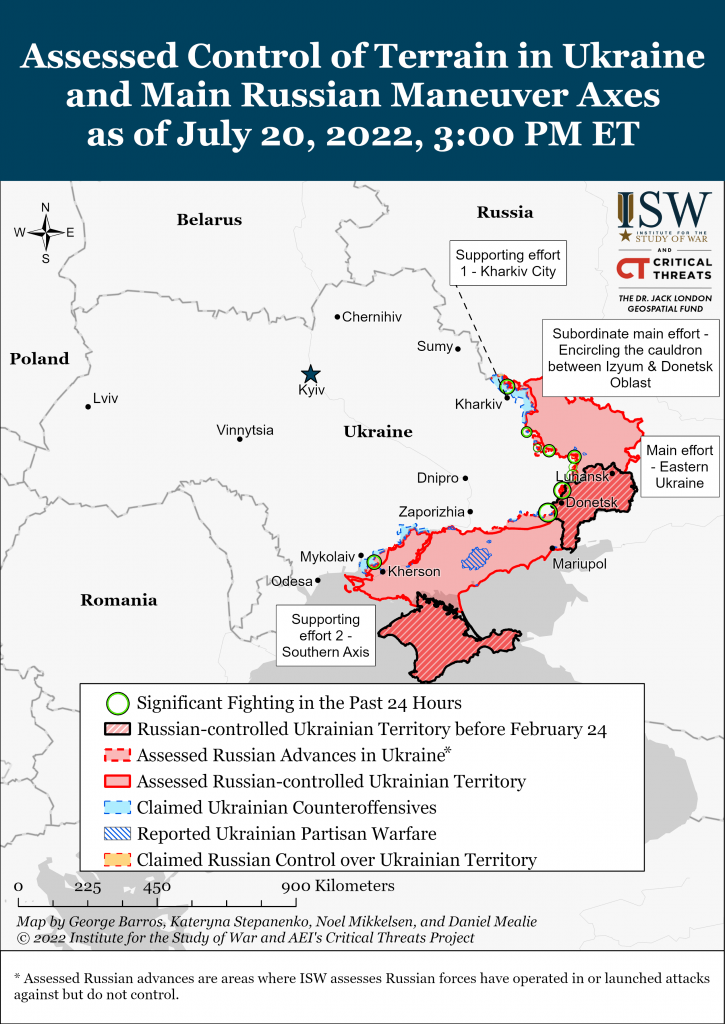 Russian forces continued limited ground assaults east of Siversk on July 20. The Ukrainian General Staff stated that Ukrainian troops pushed back Russian troops near Hryhorivka (northeast of Siversk) and Spirne (southeast of Siversk).[13] The Russian grouping in this area is likely still severely degraded by recent operations to complete the capture of the Luhansk Oblast administrative borders and is therefore only making slow and grinding progress towards Siversk. 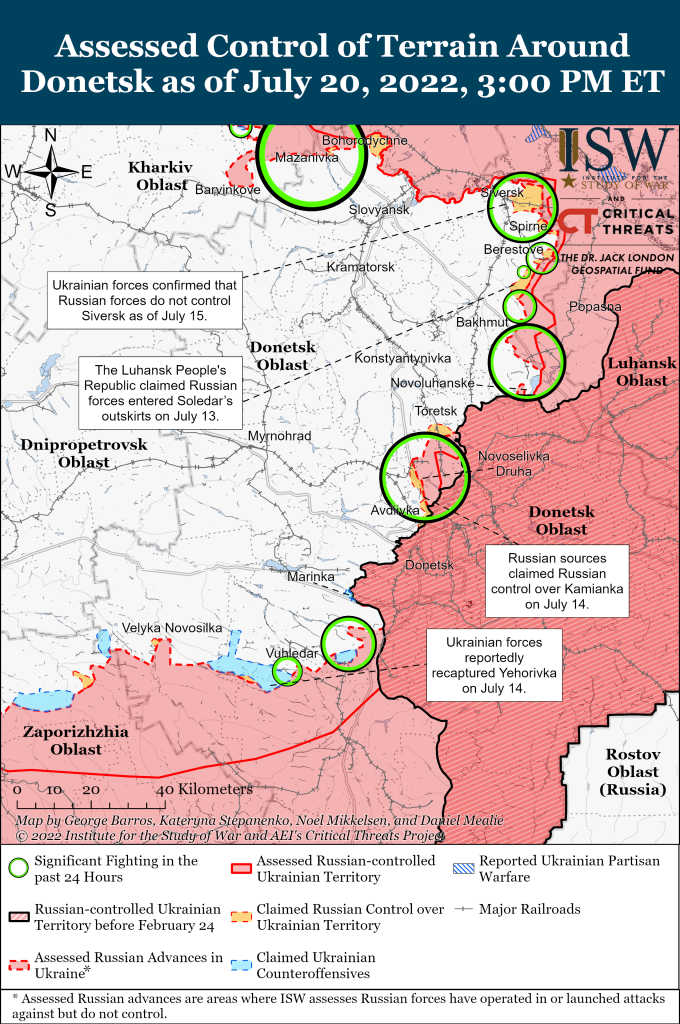 Russian forces made incremental progress northeast of Bakhmut along the T1302 highway on July 20. The Donetsk People’s Republic (DNR) Territorial Defense Force claimed that joint DNR and Russian troops took control of Berestove, about 25km northeast of Bakhmut.[14] The DNR Territorial Defense Force suggested that DNR troops will use the capture of Berestove to move southwest along the T1302 towards Soledar and eventually Bakhmut.[15] Russian forces also continued to fight south of Bakhmut around Vershyna and Novoluhanske, including near the Vuhledar Power Plant.[16] Russian forces are likely setting conditions for three directions of advance on Bakhmut- from the southwest of the Berestove-Soledar line; west from Pokrovske; and north from Novoluhanske and the territory of the Vuhledar Power Plant.[17] Russian troops continued to conduct air and artillery strikes around Bakhmut along these three lines of advance.[18]

Russian forces conducted limited ground attacks around Donetsk City and near the Donetsk-Zaporizhia Oblast border on July 20. The Ukrainian General Staff noted the Russian forces conducted two failed reconnaissance-in-force attempts in Novoselivka Druha, just northeast of Avdiivka near the H20 highway that runs from Avdiivka to Kostyantynivka.[19] Russian forces reportedly also unsuccessfully attempted to advance towards Mykilsky and Novomykhailivka—both southwest of Donetsk City about 60km from the Donetsk-Zaporizhzhia Oblast border.[20] 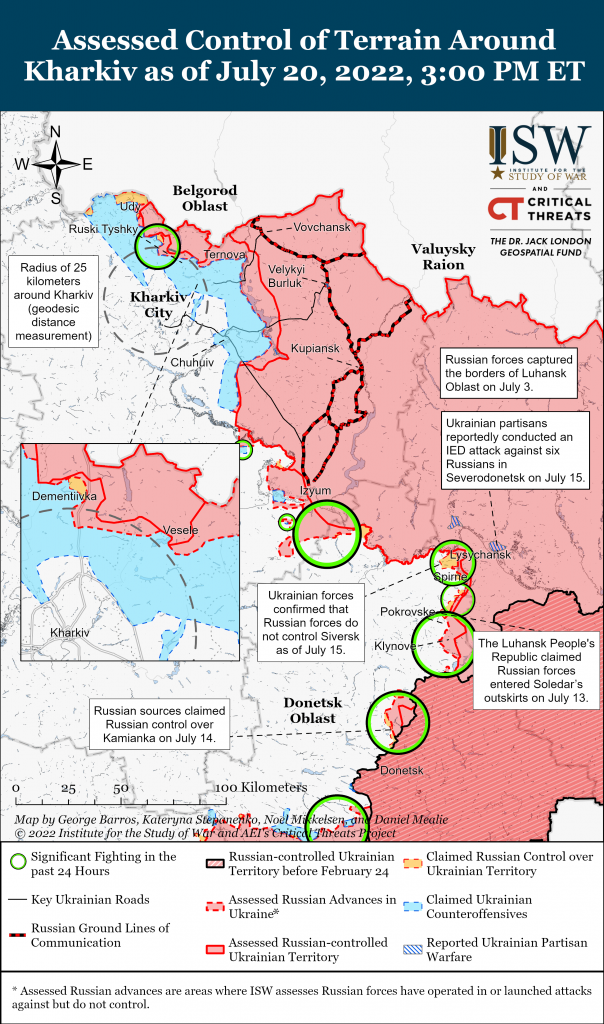 Ukrainian forces struck the Antonivskyi Bridge over the Dnipro River east of Kherson City for the second day in a row on July 20.[23] Head of the Russian-backed Kherson Occupation Administration Vladimir Saldo announced that the bridge is closed to freight traffic for repairs but that it remains open to passenger vehicles.[24] Ukrainian Kherson Oblast Military Administration Adviser Serhiy Khlan stated that the Ukrainian strikes on the Antonivskyi Bridge have made it impossible for Russian forces to transport heavy equipment across the bridge.[25]

Russian forces continued strikes along the line of contact but made no confirmed ground assaults on the Southern Axis on July 20. Ukraine’s Southern Operational Command reported that Russian forces fired 20 missiles from S-300 anti-air systems in Kherson Oblast at unspecified ground targets overnight on July 19-20.[26] Russian forces conducted air and missile strikes on Murakhivka and Novohryhorivka, Mykolaiv Oblast, and on the Pidyommyy Bridge in Zatoka, Odesa Oblast.[27]

Ukrainian partisans attacked Russian occupation personnel at the Zaporizhzhia Nuclear Power Plant (NPP) in occupied Enerhodar, Zaporizhia Oblast on July 19. The Ukrainian Resistance Center reported that the partisan attack injured nine Russian occupation personnel and killed an unspecified number.[28] Russian-backed Zaporizhia Oblast occupation administration head Vladimir Rogov claimed that Ukrainian “terrorists,” likely referring to partisans, attacked the Zaporizhzhia NPP with kamikaze UAVs, which are highly accurate and unlikely to have risked damage to the Zaporizhzhia NPP nuclear reactors.[29] If true, a UAV attack would be the most sophisticated Ukrainian partisan attack ISW has observed to date. Geolocated footage shows shrapnel but no other evidence of damage 300 meters from the Zaporizhia NPP reactors, but this footage could have been staged to incite panic and further occupation authorities’ anti-Ukrainian propaganda.[30] 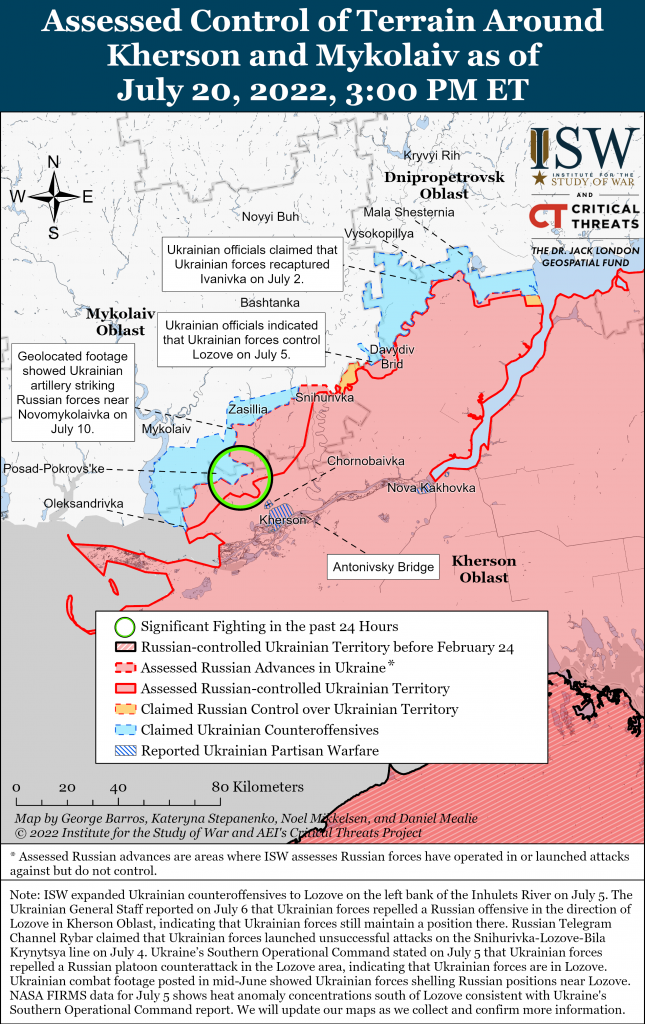 Russian occupation authorities may be propagandizing recent Ukrainian high-precision strikes against Russian assets and Ukrainian partisan activity in occupied areas in order to set conditions for mass deportations of Ukrainian citizens to Russian territory. The Luhansk People’s Republic (LNR) Internal Ministry claimed that LNR authorities are bussing residents of Kozacha Lopan (northern Kharkiv Oblast) to “rescue settlements” in Russia due to intensified Ukrainian shelling of the settlement and its surroundings.[31] ISW reported on July 17 that Russian occupiers are similarly preparing for massive deportations from Southern Ukraine under the guise of punitive measures against anti-occupation dissent.[32] Such forced deportations may be a means of exporting Ukrainian labor and combat power to the Russian Federation.