The Russian Defense Ministry announced that the Russian operational pause has concluded on July 16, confirming ISW’s July 15 assessment.[1] Russian Defense Minister Sergey Shoigu ordered Southern Group Commander General of the Army Sergey Surovikin and Central Group Commander Colonel General Alexander Lapin to increase offensive operations on all axes on July 16, but the tempo of the resuming Russian offensive will likely fluctuate or stutter over the coming days.[2] Russian forces conducted fewer ground assaults on all axes on July 16 than on July 15, but maintained increased artillery and missile strikes on July 16.[3]

Shoigu indicated that Surovikin and Lapin will both continue to command forces on the Eastern Axis even though a force concentration and effort of this size should only require a single, very senior overall commander. Surovikin should in principle be in overall command because he outranks Lapin. Shoigu has not even named Surovikin as the head of Russia’s Southern Military District (SMD) despite the likely ousting of SMD Commander General of the Army Alexander Dvornikov and despite Surovikin’s experience commanding the Southern Grouping in Ukraine. Lapin, in contrast, has been and remains commander of the Central Military District.[4] The Kremlin‘s failure to use the operational pause to reorganize the Russian military command structure in Ukraine and its decision to instead retain an ad-hoc command structure is very odd.  The apparent dual command of two very senior generals over operations in a very small area may hinder Russian operations going forward. 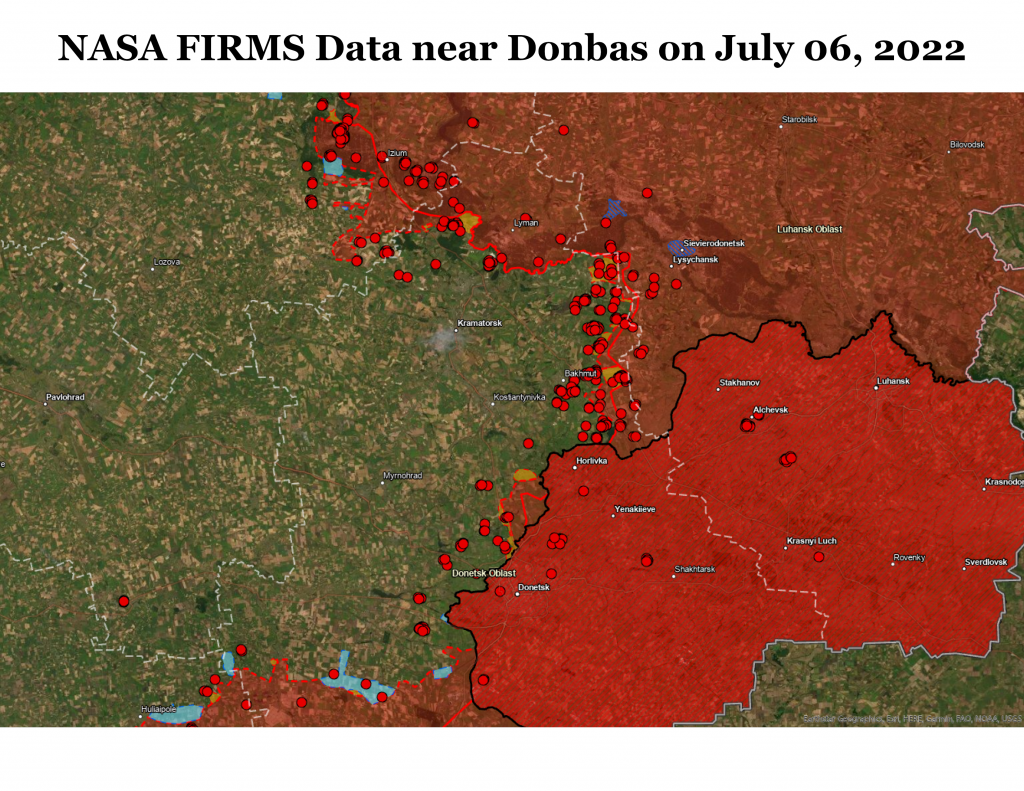 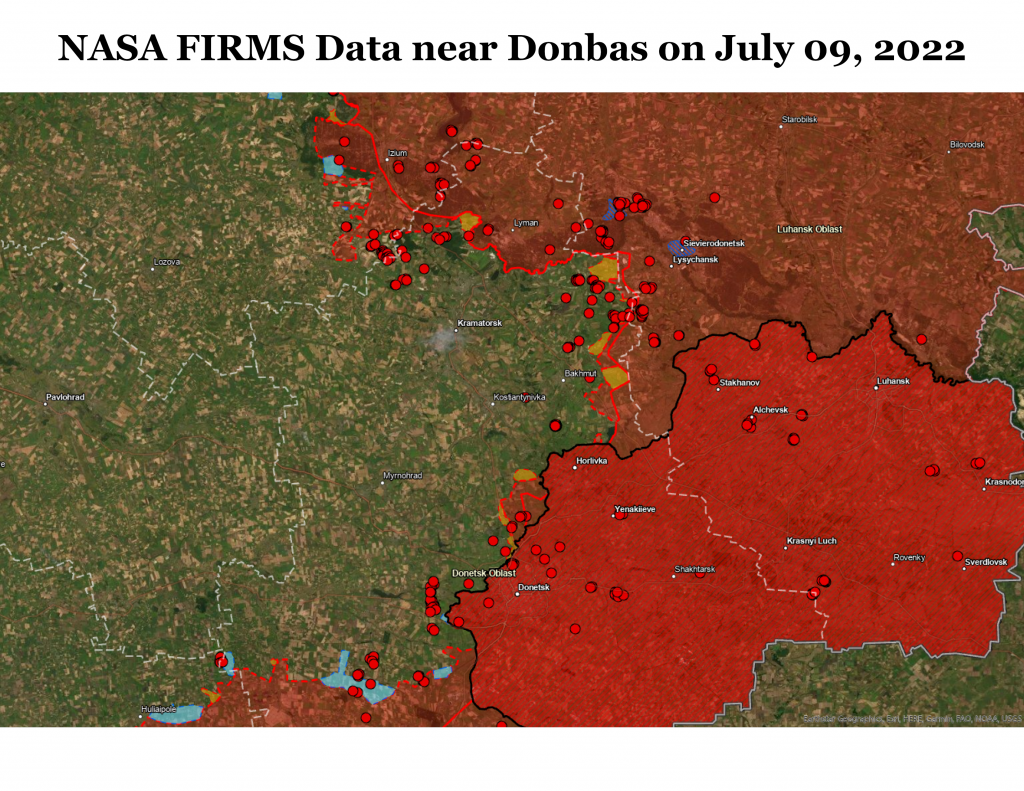 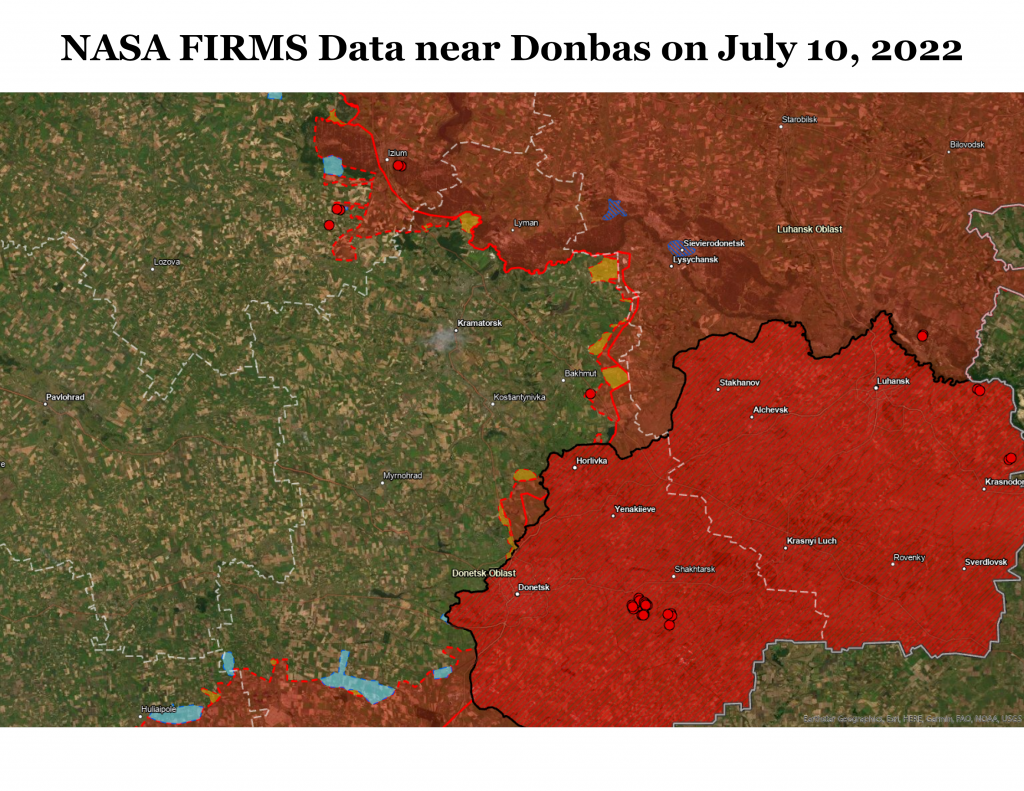 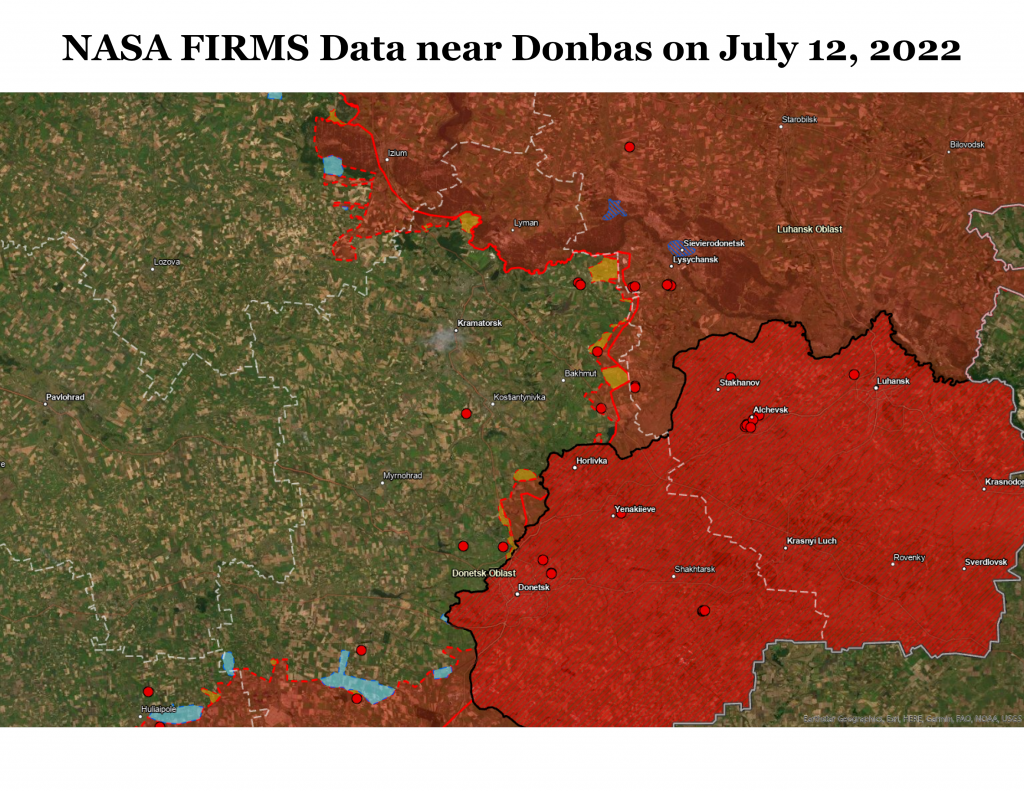 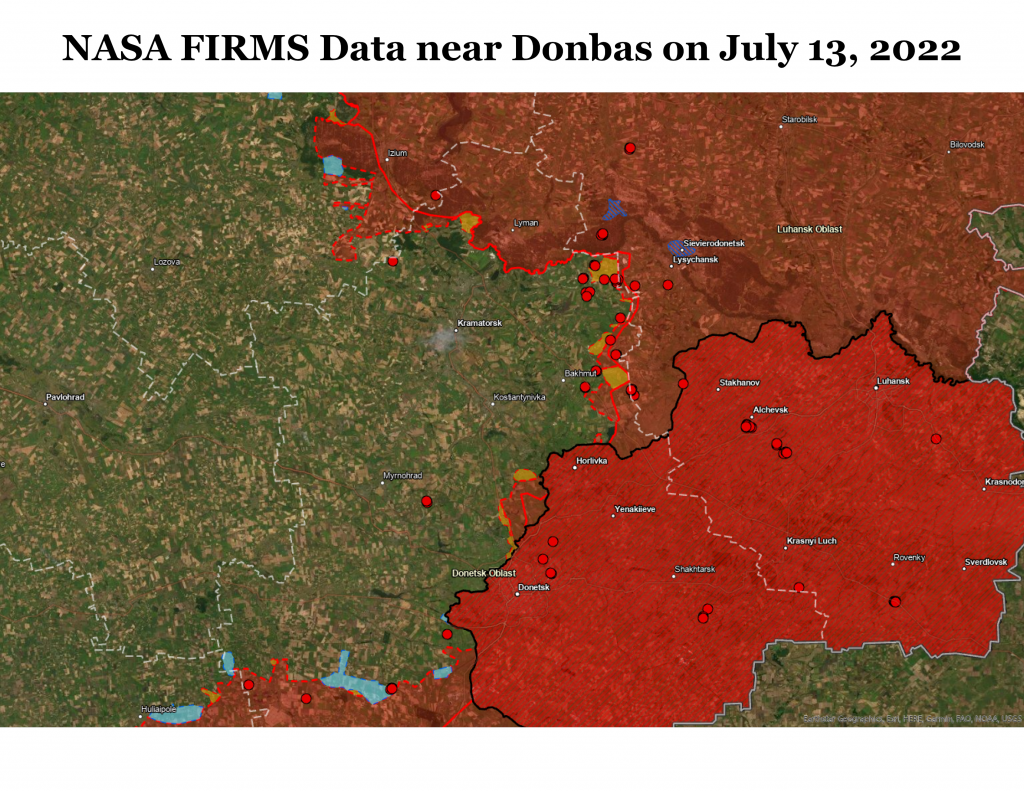 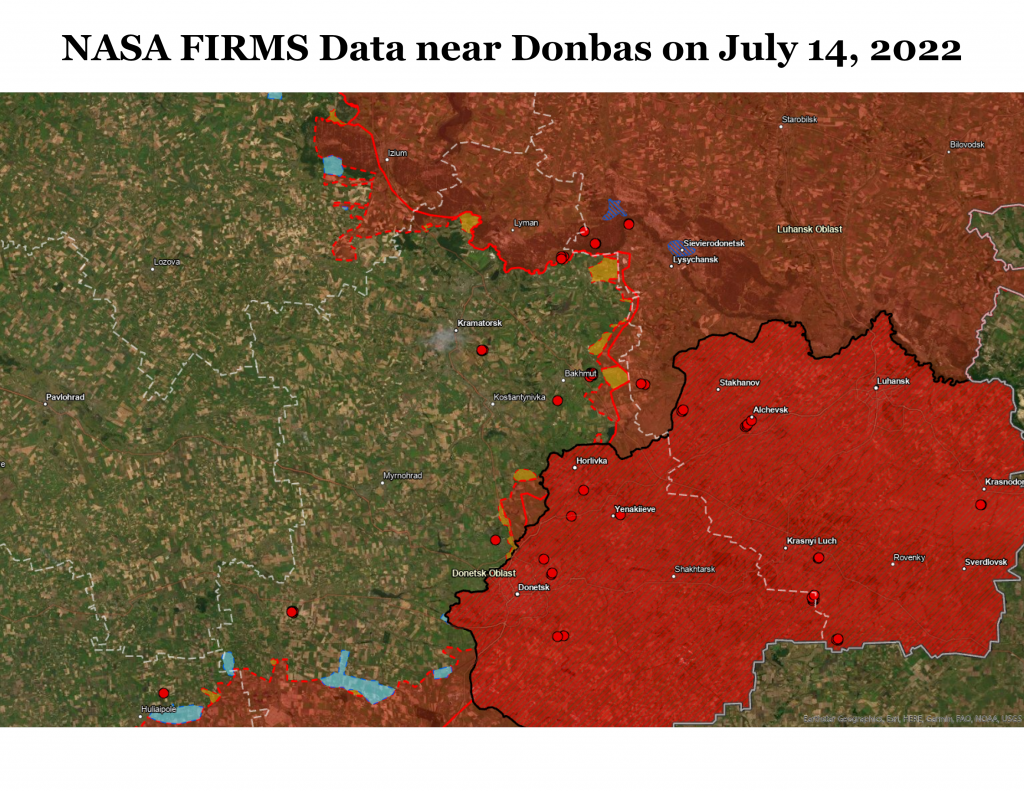 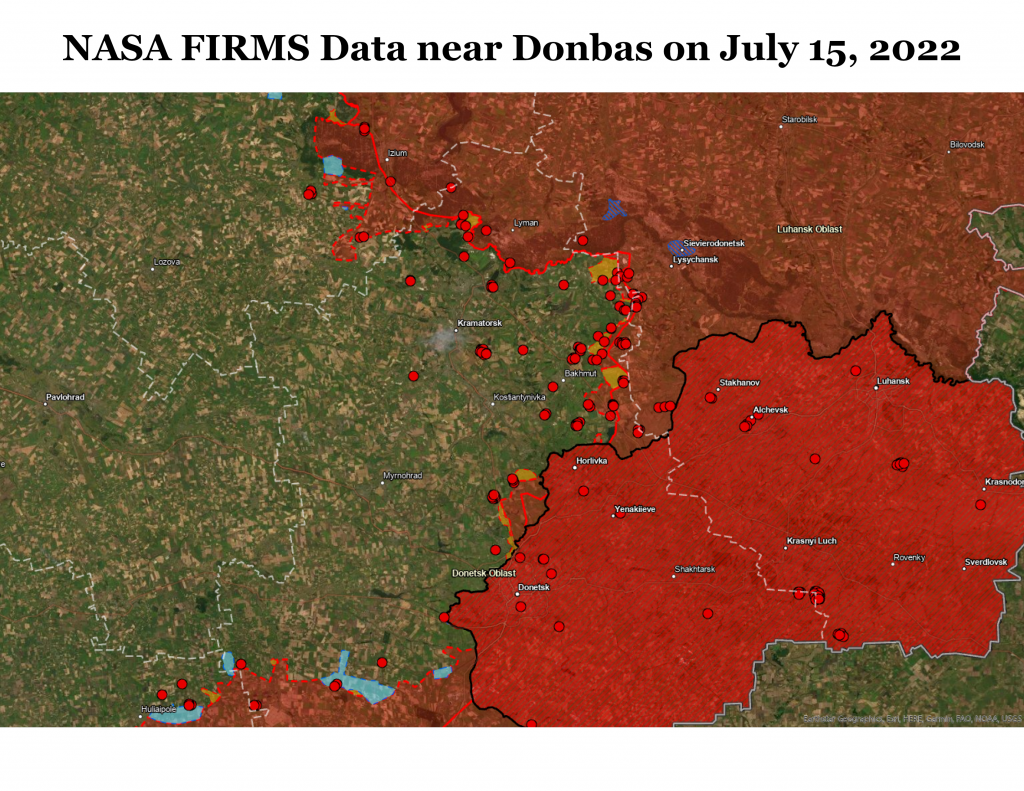 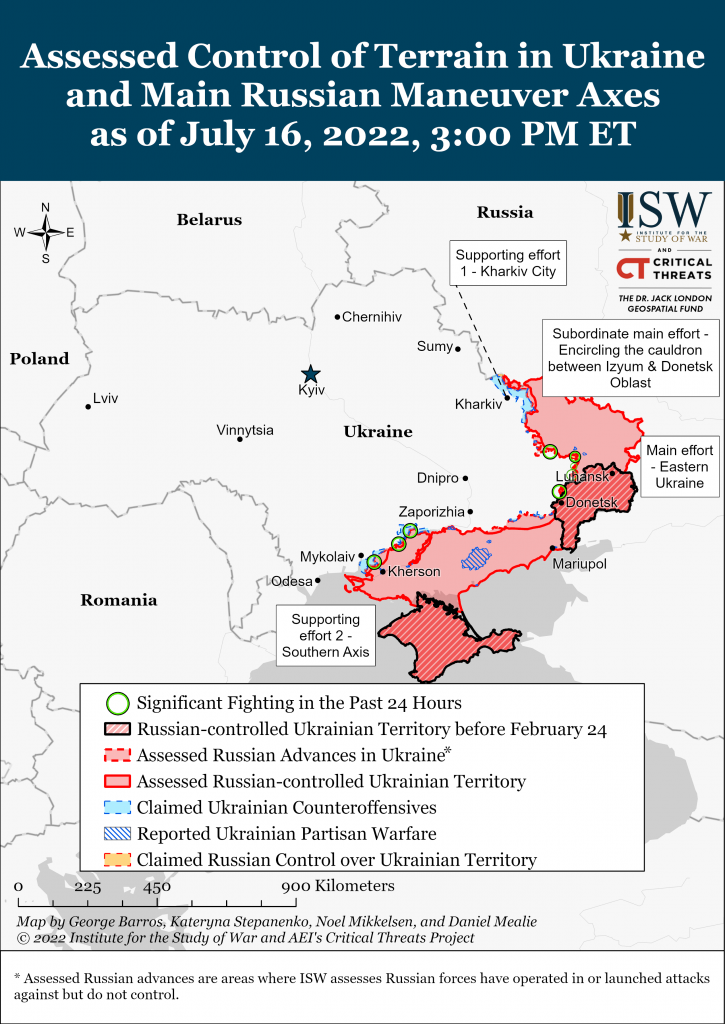 Russian forces continued to fire on settlements southeast of Izyum but did not make any confirmed ground assaults in the direction of Slovyansk on July 16.[9] The Ukrainian General Staff reported that Russian forces are regrouping in order to further advance towards Slovyansk and Barvinkove.[10] Russian troops may seek to advance southeast from Barvinkove either to support operations towards Slovyansk or to open parallel lines of advance towards Kramatorsk. Russian forces additionally conducted air and artillery strikes against settlements along the Kharkiv-Donetsk Oblast border northwest of Slovyansk and hit Bohorodychne, Dibrovne, Mazanivka, Mykilske, and Novomykolaivka.[11]

Russian forces continued limited and unsuccessful ground assaults towards Siversk on July 16.[12] The Ukrainian General Staff stated that Russian troops unsuccessfully attempted to improve their tactical positions in Ivano-Darivka (around 5km southeast of Siversk) and Hryhorivka (10km northeast of Siversk).[13] Russian forces also shelled Siversk and surrounding settlements of Verkhnokamyanske and Zvanivka to continue to set conditions for operations to take control of the city.[14]

Russian forces continued ground assaults to the south of Bakhmut on July 16.[15] The Ukrainian General Staff noted that Ukrainian troops repelled Russian attempts to advance around Novoluhanske, Semyhirya, Dolomytne, Roty, and Vershyna, all within 25km south of Bakhmut.[16] Russian forces notably resumed efforts to attack the Vuhledar Power Plant in Novoluhanske.[17] The Vuhledar Power Plant lies on the northern edge of the Vuhlehirske Reservoir, a major water feature surrounded by settlements such as Svitlodarsk. Russian forces began their concerted efforts to break free of the canalized terrain in this area at the end of May.[18] Russian forces are likely focusing on advancing past the Vuhledar Power Plant in order to set conditions for a cross-country advance towards Bakhmut, as the area north and west of the power plant is relatively flatter and more open than the terrain around the Vuhlehirske Reservoir.[19] Russian forces also continued to conduct artillery strikes around Bakhmut.[20]

Russian forces continued to fire along the Avdiivka-Donetsk City line of contact but did not conduct any confirmed ground attacks in this area on July 16.[21] The Ukrainian General Staff reported that Russian forces are firing on Avdiivka to dislodge Ukrainian positions in the city.[22] 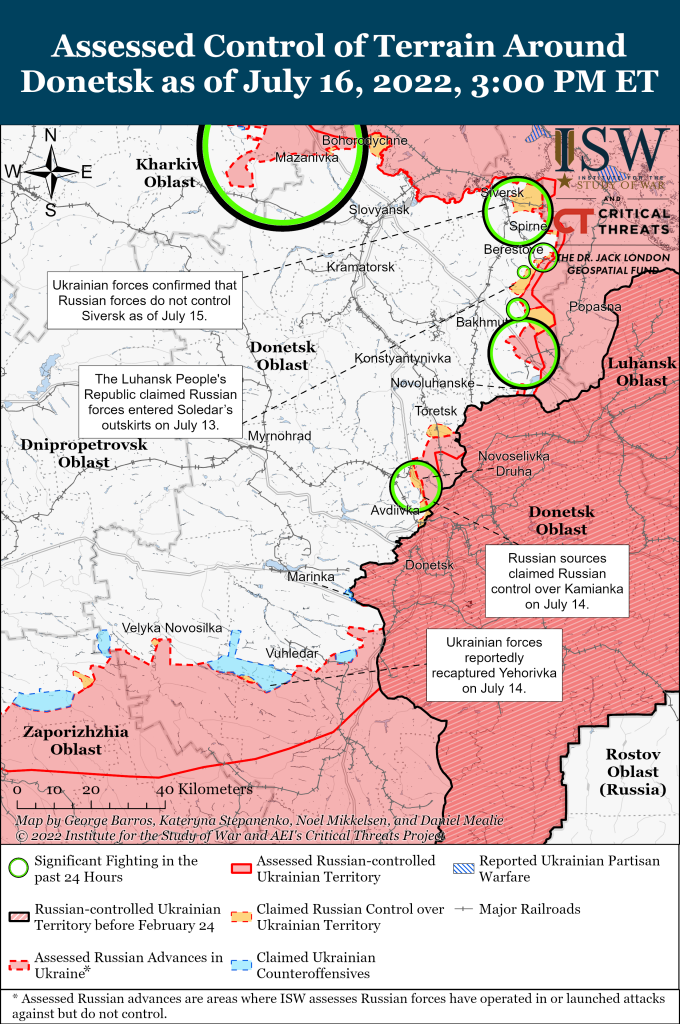 Russian President Vladimir Putin may have ordered Russian forces to seize Kharkiv City and the rest of unoccupied Kharkiv Oblast despite the extreme improbability of success. ISW offers this observation as a hypothesis rather than an assessment because evidence and indicators for it are limited and circumstantial. Russian forces have been attempting to take Dementiivka to the north of Kharkiv City since June 26 even though capturing Dementiivka has limited significance for the objective of defending Russian territory against Ukrainian offensive actions.[23] Ukraine’s Main Intelligence Directorate released an intercepted conversation on July 16 in which a Russian soldier stated that his commander cares nothing for his losses but only wants to reach Kharkiv.[24] Russian-backed occupation authorities continue to set conditions to annex Kharkiv Oblast beyond currently-held territory, as ISW has previously assessed.[25] The Russian-backed Kharkiv Oblast occupation government head Vitaly Ganchev and Luhansk People’s Republic (LNR) Head Leonid Pasechnik signed a mutual cooperation and defense agreement on July 16, which indicates that Russian authorities in Kharkiv Oblast are setting conditions for long-term occupation contingencies.[26] Ganchev previously announced on July 6 that occupied Kharkiv Oblast will consist of the Kupyansk, Izyum, Vovchansk, and Kharkiv districts, which incorporates territory that Russian forces do not yet control.[27] Russian forces will likely inconsistently intensify ground assault attempts north of Kharkiv City over the coming days to reflect continued territorial ambitions in Kharkiv Oblast but are unlikely to secure significant territorial gains. Russian forces continued artillery strikes along the entire line of contact and on Kharkiv City.[28] 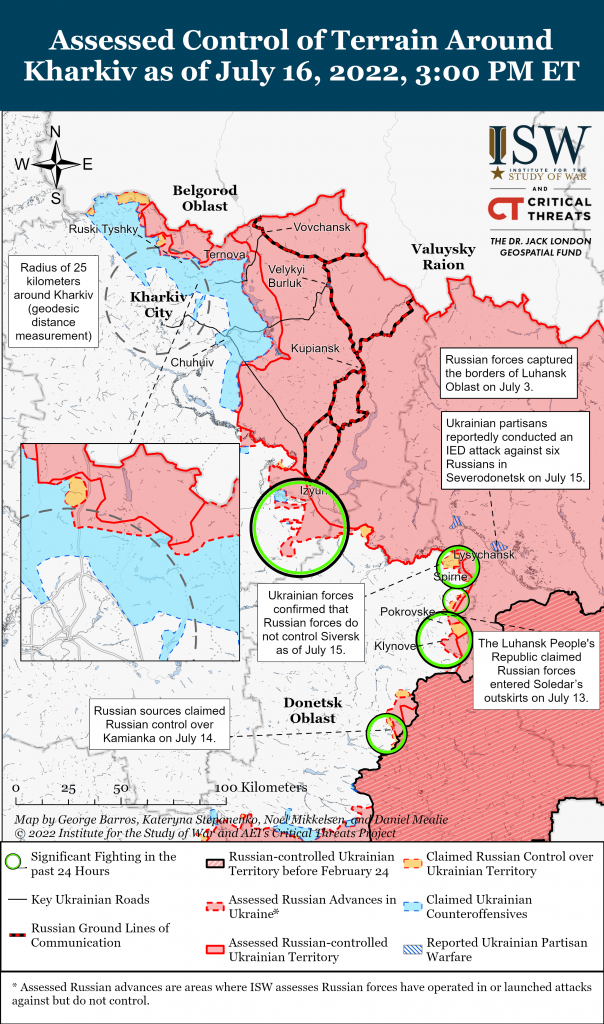 Russian forces launched missile and rocket strikes at ground targets across the Southern Axis on July 15-16. Russian forces launched four-to-six Kh-101 cruise missiles – advanced, high-precision cruise missiles designed to evade air defense systems – at Dnipro, Dnipropetrovsk Oblast in the evening on July 15.[29] Footage shows Ukrainian air defenses successfully intercepting at least one of the missiles, and at least two missiles hit buildings in central Dnipro.[30] The Russian Defense Ministry claimed that the missiles struck the Yuzhny Machine Building Plant used to build and repair Ukrainian Tochka-Us and MLRS systems in Dnipro’s industrial district, but ISW is unable to verify the exact locations of the strikes at this time.[31] The Russian usage of Kh-101 missiles to strike a Ukrainian military factory could indicate that Russian forces are either running out of appropriate munitions for such strikes or are desperate to curtail Ukrainian strikes on Russian military infrastructure by targeting Ukrainian supplies of missile and rocket systems.

The Ukrainian General Staff reported that Russian forces continued shelling the line of contact and did not conduct ground offensives on July 16.[32] 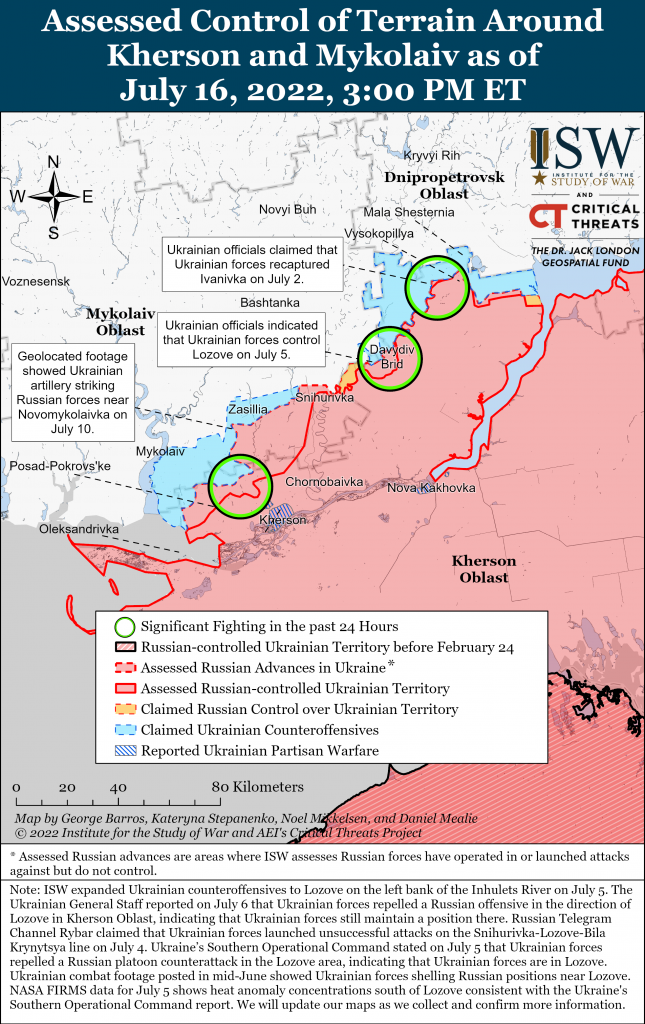 Russian authorities in occupied areas are likely assessing that growing Ukrainian partisan activity seeks to threaten and complicate efforts to institute coherent occupational control and are strengthening administrative regimes accordingly. Ukrainian news source Ria-Melitopol reported on July 16 that Russian authorities in Melitopol have substantially increased Russian military presence in the city and established checkpoints to stop and strip-search civilians.[33] Kherson Oblast Administration similarly warned that Russian occupation authorities in the Kakhovskyi district (near Kherson City) have issued an order to strengthen the access regime for communal enterprises and other checkpoints, which will allow Russian forces to detain suspected Ukrainian “terrorists” for 72 hours for violating controls on the access regime.[34] Ukraine’s Center for Strategic Cooperation noted that Russian authorities are struggling to galvanize public support for occupation administrations in Kharkiv Oblast and in the cities of Melitopol and Mariupol.[35] These reports indicate that Russian authorities perceive a growing threat to the consolidation of occupational regimes and will likely continue efforts to crack down on pro-Ukrainian sentiments and actions in occupied areas.