Belarusian President Alexander Lukashenko is likely continuing to grant Russian forces access to Belarusian airspace to demonstrate at least nominal support to Russian President Vladimir Putin without risking direct military involvement of Belarusian Armed Forces in operations in Ukraine. Deputy Chief of the Main Operational Department of the Ukrainian General Staff Oleksiy Gromov previously reported on July 7 that the Belarusian government transferred use of the Pribytki airfield in Gomel Oblast to Russia.[i] Independent Belarusian monitoring organization The Hajun Project similarly reported on July 11 that a Russian Airborne Warning and Control System (AWACS) aircraft flew into Belarusian airspace for the first time since April 4.[ii] The Hajun Project noted that the Belarusian government introduced new airspace restrictions along the border with Ukraine where the AWACS aircraft patrolled between July 10 and 11.[iii] Taken together, these data points likely indicate that Lukashenko is attempting to provide support to Putin's war in Ukraine short of direct Belarusian military intervention in an effort to respond to the pressure Putin is likely putting on him. As ISW has previously assessed, the likelihood of direct Belarusian involvement in the war in Ukraine remains low due to the effect that might have on the stability and even survival of Lukashenko’s regime.[iv] 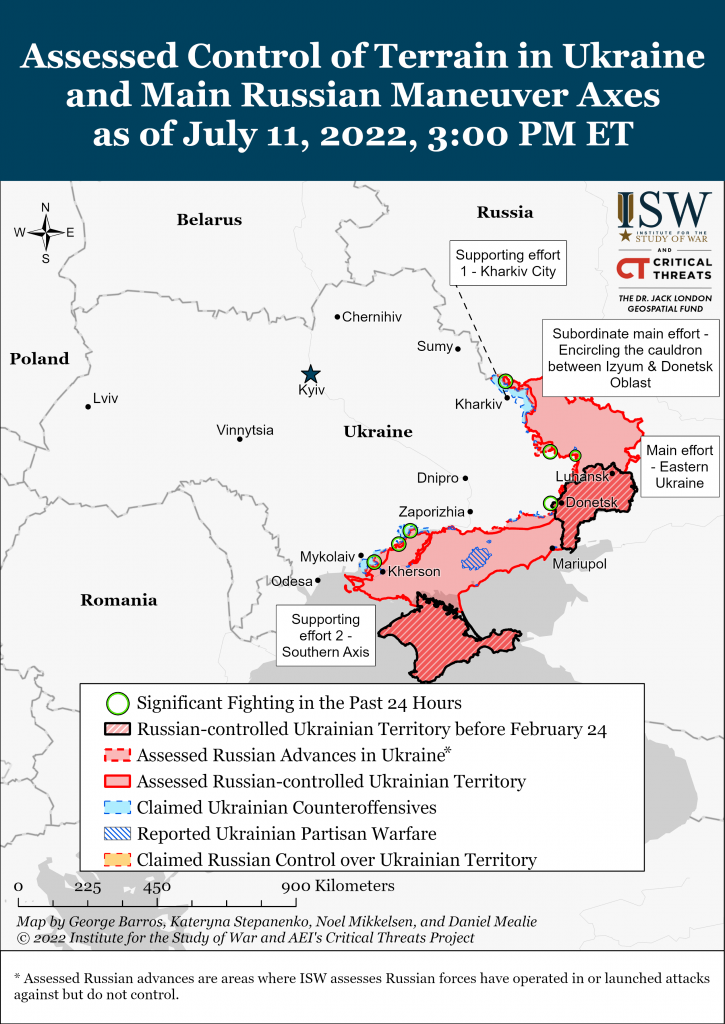 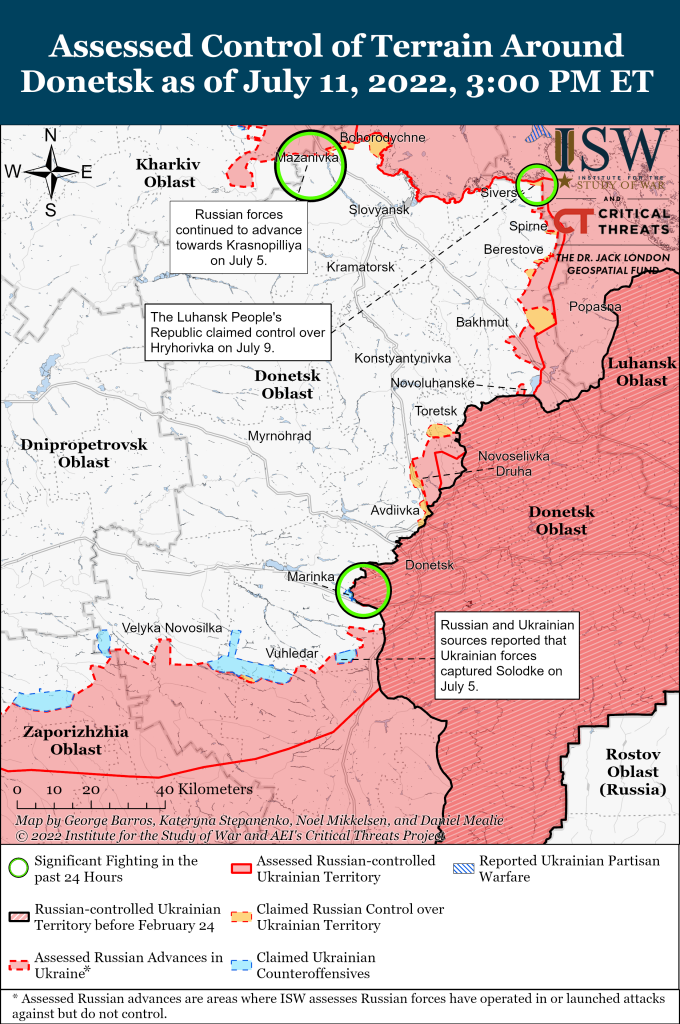 Russian forces continued offensive operations west of the Luhansk Oblast border around Siversk on July 11. The Ukrainian General Staff noted that Russian forces did not conduct any active ground assaults around Siversk, but Russian Telegram channels reported that Russian forces are fighting around Ivano-Darivka (less than 10km southeast of Siversk) in order to advance to Vyimka and gain access to the T0513 highway that runs northward into Siversk.[x] While ISW cannot independently confirm Russian claims of ground attacks to the south of Siversk, Russian troops are likely continuing various offensive operations, including intensive shelling, in the area in order to prepare to advance on the city.[xi] Russian forces additionally shelled Zakitne, Serebryanka, Hryhorivka, Bilohorivka, Verkhmokamyanske, and Zvanivka.[xii] 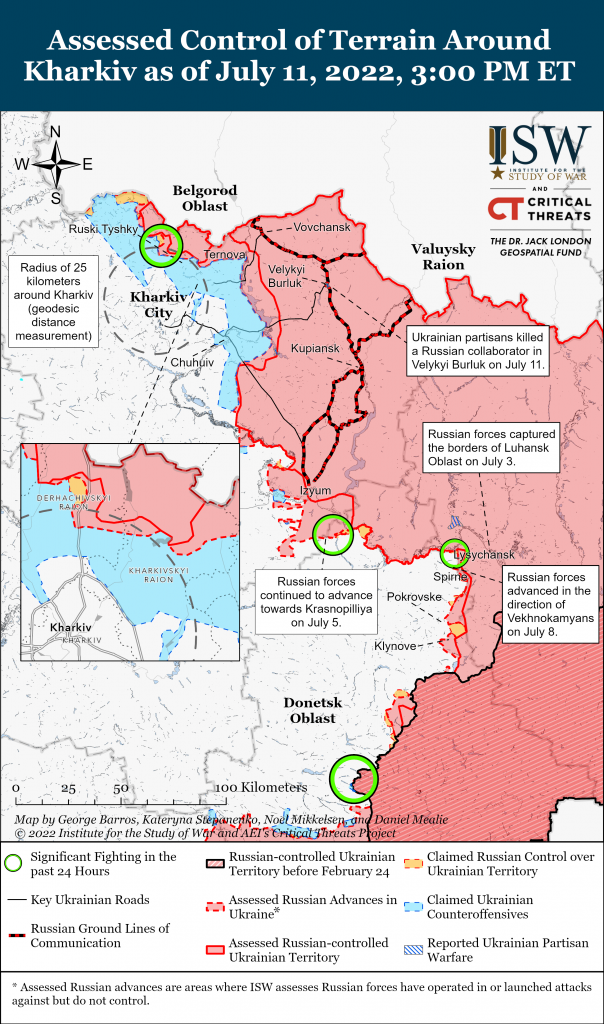 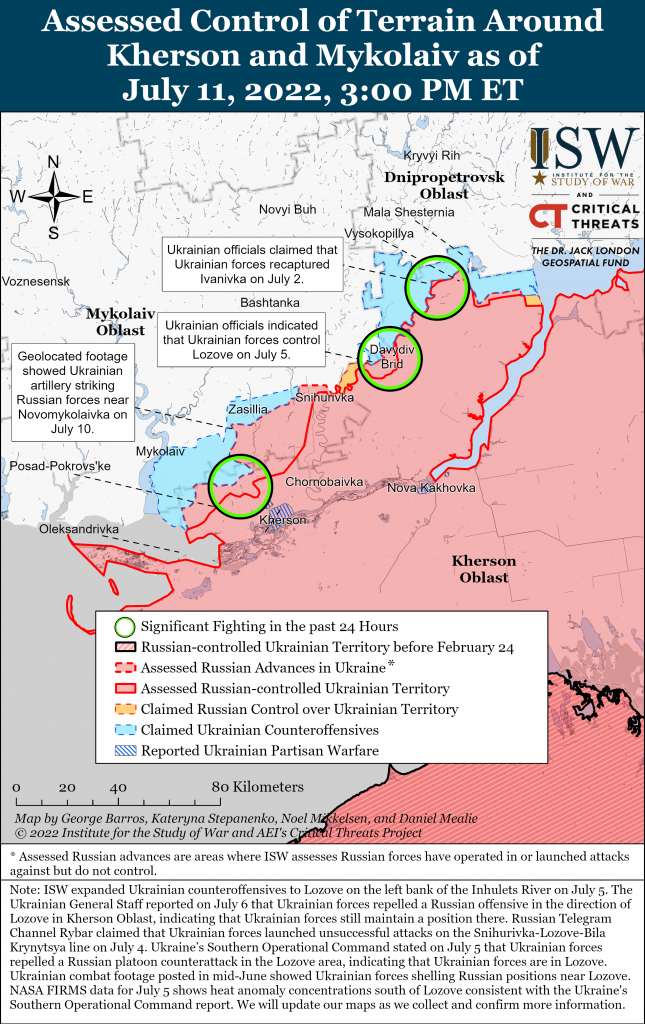 Russian forces did not launch offensive operations on the Southern Axis on July 11 and focused on maintaining defensive positions.[xxi] Russian forces continued air, artillery, and missile strikes along the entire Southern Axis line of contact.[xxii] Ukrainian sources reported that Russian fighter jets launched four Kh-31 missiles at an unspecified coastal settlement and three Kh-31 missiles at an unspecified agricultural area in Odesa Oblast from positions over Crimea, likely aiming at production and other critical infrastructure.[xxiii]

Russian forces continue to face desertion and personnel shortages. Pro-Russian Telegram channel Moscow Calling published an image of a billboard listing 300 servicemen of the 205th Separate Motorized Rifle Brigade of the 49th Combined Arms Army who refused to participate in the Russian invasion of Ukraine.[xxviii] The Ukrainian General Staff had previously reported that the 205th Separate Motorized Rifle Brigade (based in Budyonnovsk, Stavrolpol Krai) was deployed to Mariupol and Zaporizhia Oblast efforts on March 3.[xxix] The billboard further supports the Ukrainian General Staff’s report that Russian forces are seeing increasing cases of disobedience and desertion within Russian forces.[xxx]

The Kremlin continues to set annexation conditions for Ukrainian territories outside of Donbas. Russian President Vladimir Putin signed a decree that simplifies the process for all Ukrainians to obtain Russian citizenship.[xxxv] The law had previously simplified passport distribution in the Donetsk and Luhansk People’s Republics (DNR and LNR), Kherson, and Zaporizhia Oblasts, and may indicate the Kremlin’s intention to annex other occupied territories like Kharkiv Oblast. LNR Ambassador to Russia Rodion Miroshnik also claimed that 20 occupied Luhansk Oblast settlements paired with separate administrative districts and oblasts in Russia.[xxxvi]