Ukrainian military officials announced the start of the Ukrainian counteroffensive in Kherson Oblast on August 29. Ukrainian officials reported that Ukrainian forces have broken through the first line of defenses in unspecified areas of Kherson Oblast and are seeking to take advantage of the disruption of Russian ground lines of communication caused by Ukrainian HIMARS strikes over many weeks.[i] Ukrainian officials did not confirm liberating any settlements, but some Russian milbloggers and unnamed sources speaking with Western outlets stated that Ukrainian forces liberated several settlements west and northwest of Kherson City, near the Ukrainian bridgehead over the Inhulets River, and south of the Kherson-Dnipropetrovsk Oblast border.[ii] The Russian Defense Ministry (MoD), Russian proxies, and some Russian milbloggers denounced the Ukrainian announcement of the counteroffensive as “propaganda.”[iii]

Many Russian milbloggers nevertheless reported a wide variety of Ukrainian attacks along the entire line of contact, and the information space will likely become confused for a time due to panic among Russian sources.[iv] Russian outlets have also vaguely mentioned evacuations of civilians from Kherson Oblast, but then noted that occupation authorities in Kherson Oblast are calling on residents to seek shelter rather than flee.[v] ISW will report on the Ukrainian counteroffensive in a new section below.

International Atomic Energy Agency (IAEA) Director General Rafael Mariano Grossi announced that the IAEA mission to the Zaporizhzhia Nuclear Power Plant (ZNPP) left for the plant on August 29. Grossi specified that he is leading the mission but neither he nor the IAEA specified a timeline for the investigation.[vi] 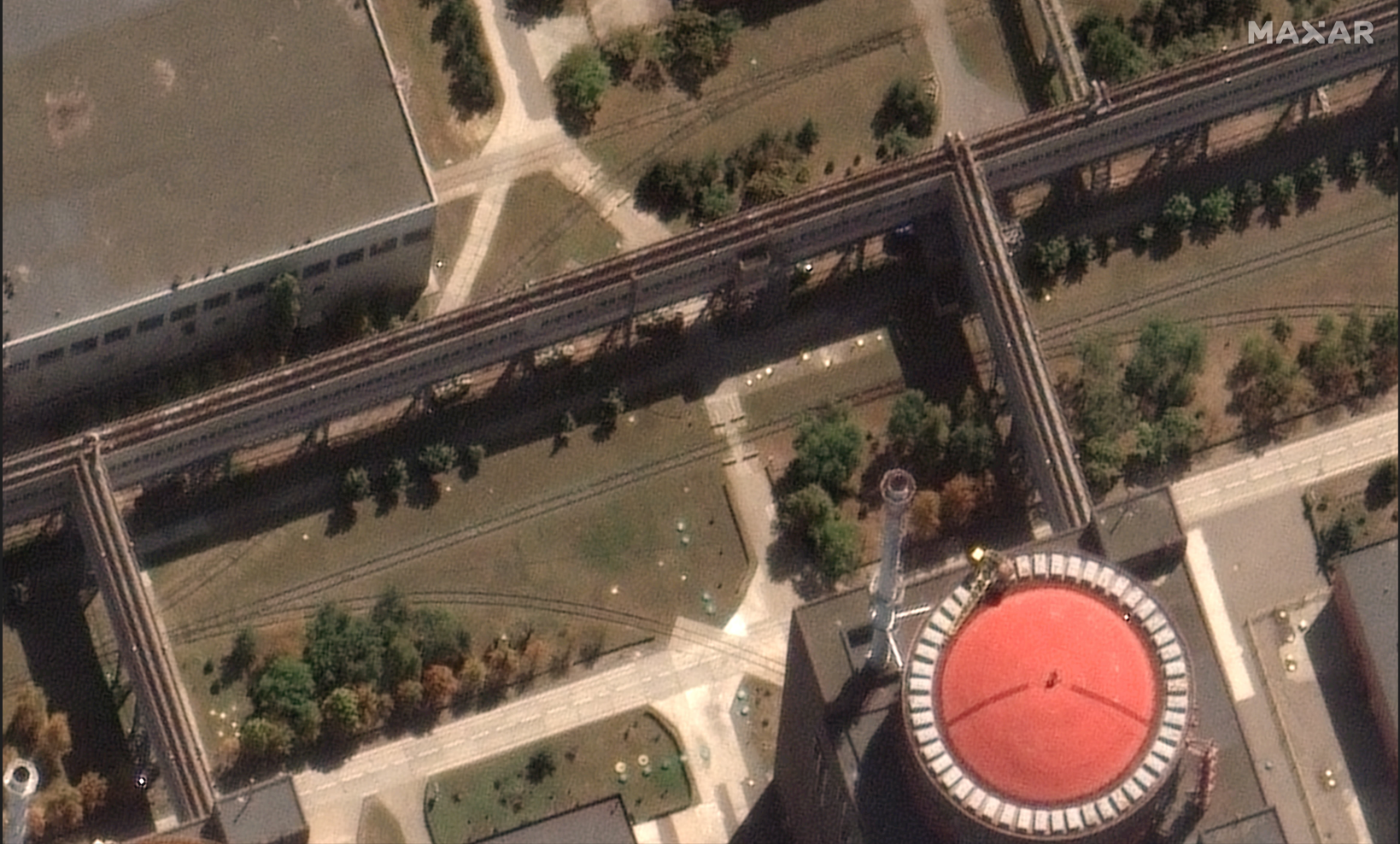 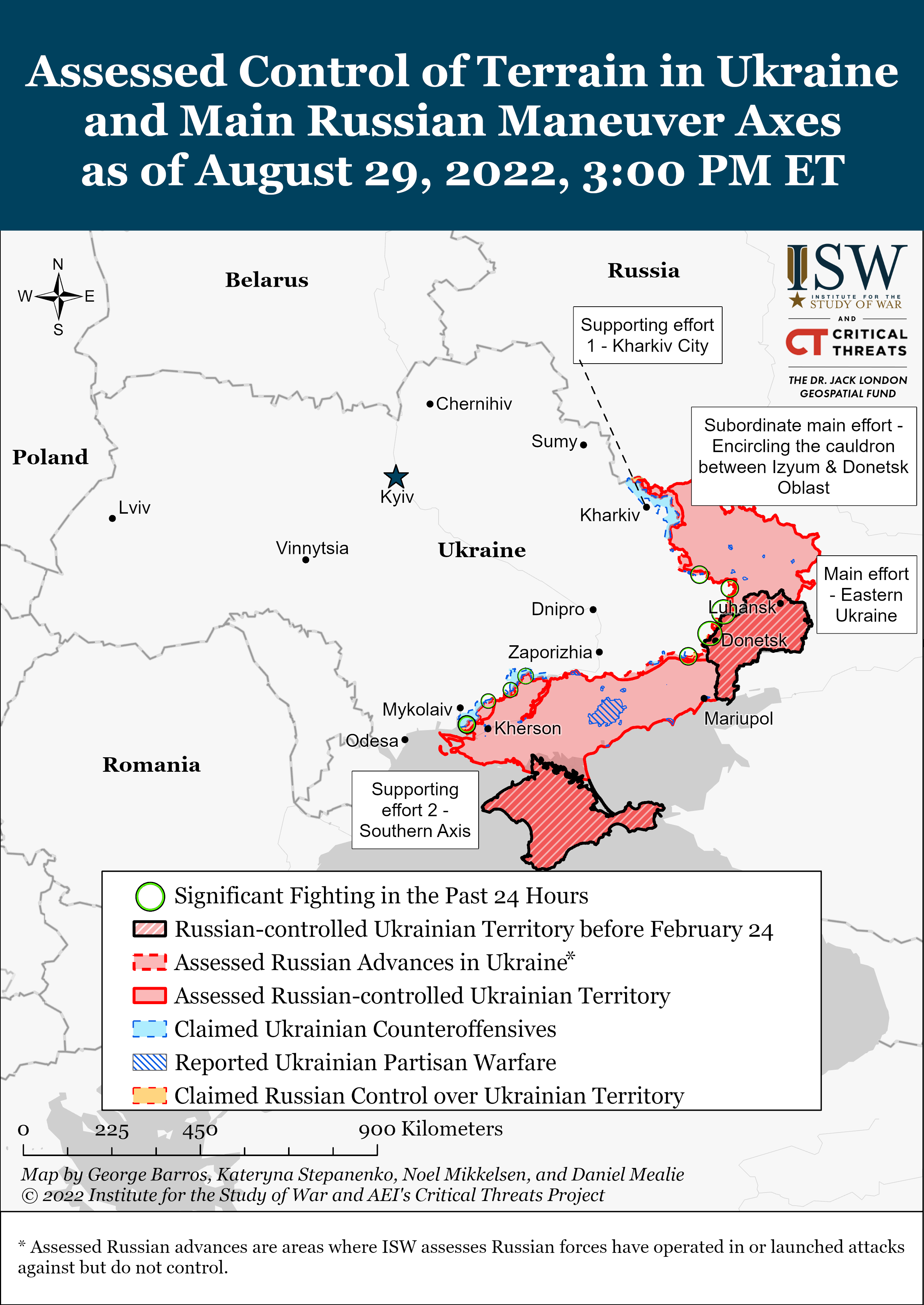 Ukrainian military officials announced that Ukrainian forces began a counteroffensive operation in Kherson Oblast on August 29 after severely disrupting Russian ground lines of communication (GLOCs) for weeks. Southern Operational Command Spokesperson Nataliya Gumenyuk stated that Ukrainian forces “began counteroffensive actions in many directions” and have broken through the first line of defense in an unspecified area.[xi] The Ukrainian operational group “Kakhovka” stated that Ukrainian forces have cut Russian GLOCs across the Dnipro River in Kherson Oblast and called the situation a “brilliant chance to return [Ukrainian] territories.”[xii] The “Kakhovka” group also reported that the Donetsk People’s Republic (DNR) 109th Regiment and Russian airborne troops have left their positions in an unspecified area of Kherson Oblast, and Ukrainian wires claimed that these elements withdrew from their positions around Kherson City.[xiii] The DNR 109th Regiment had previously published an appeal to Russian President Vladimir Putin in late June identifying itself as a forcibly mobilized unit, complaining that it had not been rotated away from the front line for rest, and decrying poor conditions on the frontlines.[xiv] Ukrainian military officials also released a DNR document dated July 24 that ordered the redeployment of the 109th, 113th, and 125th DNR regiments to Arkhanhelske, Vysokopillya, Zolota Balka, and Davydiv Brid in northwestern Kherson Oblast.[xv] “Kakhovka” also shared footage reportedly of a Russian serviceman seeking shelter on the ground amidst heavy artillery shelling while saying that Ukrainian forces have broken the first line of defense on August 29.[xvi] Ukrainian officials did not discuss the directionality of Ukrainian counteroffensives.

The Russian Defense Ministry (MoD) claimed on the evening of August 29 that the Ukrainian counteroffensive was a limited, failed effort, setting the tone for subsequent discussions of the counteroffensive in the Russian media space.[xxi] The Russian MoD claimed that Ukrainian forces suffered heavy personnel and equipment losses after trying and failing to advance in three unspecified directions in Kherson Oblast.[xxii] Deputy Luhansk People’s Republic (LNR) Interior Minister Vitaly Kiselyov claimed that the idea of a grand Ukrainian counteroffensive was propaganda and that Ukrainian forces only attempted a limited assault with two infantry battalions and one tank battalion, suffering heavy casualties in the attempt.[xxiii] Russian milbloggers largely claimed that reports of a Ukrainian counteroffensive were overblown, fake, or likely to fail, claiming that Ukrainian forces have so far lacked the ability to break through Russian defensive lines in past counterattacks and remain unable to do so in new counterattacks.[xxiv] These dismissive statements indicate that the Kremlin aims to maintain the façade of extensive Russian military successes in Ukraine.

Russian and Western sources claimed that Ukrainian forces liberated five settlements during the first day of the counteroffensive, but Ukrainian sources have not announced the liberation of any settlements at the time of this publication. An unnamed military official of an unspecified country told CNN that Ukrainian forces liberated Pravdyne (approximately 34km northwest of Kherson City), Novodmytrivka, and Tomyna Balka (both about 23km due west of Kherson City).[xxv] The official also stated that Ukrainian forces liberated Arkhanhelske on the eastern bank of Inhulets River and south of the Kherson-Dnipropetrovsk Oblast border.[xxvi] ISW cannot independently verify CNN’s report and will update its maps if and when more sources confirm the report. The Ukrainian official report about the withdrawal of the 109th regiment that operates in northwestern Kherson Oblast may suggest that Ukrainians have crossed the Inhulets River into Arkhanhelske. Several Russian milbloggers amplified a report from the Telegram-based milblogger Grey Zone (about 276,000 followers) that Ukrainian forces advanced 6km from their bridgehead over the Inhulets River and seized the Sukhyi Stavok settlement (approximately 7km west of Russian GLOCs along the T2207 highway).[xxvii] Ukrainian Former Head of Foreign Intelligence Service Mykola Malomuzh made similar remarks about the liberation of Sukhyi Stavok.[xxviii]

Russian forces are continuing efforts to restore their damaged GLOCs over the Dnipro River. Satellite imagery shows that Russian forces are attempting to build a pontoon crossing near the Antonivsky Bridge, which appeared to be halfway finished as of August 27.[xxxv] Geolocated satellite imagery also showed that the Kakhovka Bridge is still out of service with strike holes on the critical junctures of the bridge.[xxxvi] Satellite imagery indicated that Russian forces are continuing to move military equipment mostly north toward Kherson City via the pontoon ferry.[xxxvii] Satellite imagery showed the movement of 100 Russian military vehicles as of August 25, with few moving south.[xxxviii] Such transfer of equipment via ferries is inefficient and vulnerable to further Ukrainian strikes. Russian forces reportedly continue to experience difficulties maintaining other GLOCs to southern Ukraine. Mariupol Mayoral Advisor Petro Andryushchenko stated that Russian logistics efforts relying on Mariupol rail transit will likely falter in the following days due to lack of electricity, damage to station cranes, and flooding that hinders rail operation in Mariupol.[xxxix]

Russian forces continued efforts to advance around Donetsk City on August 29. The Ukrainian General Staff reported that Russian forces tried and failed to advance towards Pervomaiske and Nevelske to the northwest of Donetsk City and Mariinka to the southwest of Donetsk City.[li] Geolocated footage shows Russian and DNR forces advancing into Kamyanka, 11km northeast of Avdiivka.[lii] Additional geolocated footage shows that Ukrainian forces maintain positions on the northwestern outskirts of Pisky, 15km northwest of Donetsk City, and that fighting is ongoing near Pisky.[liii] Avdiivka City Military Administration Head Vitaliy Barabash stated that Russians only control one-half of Pisky as of August 29.[liv] Russian forces continued firing on Avdiivka and the surrounding settlements.[lv] 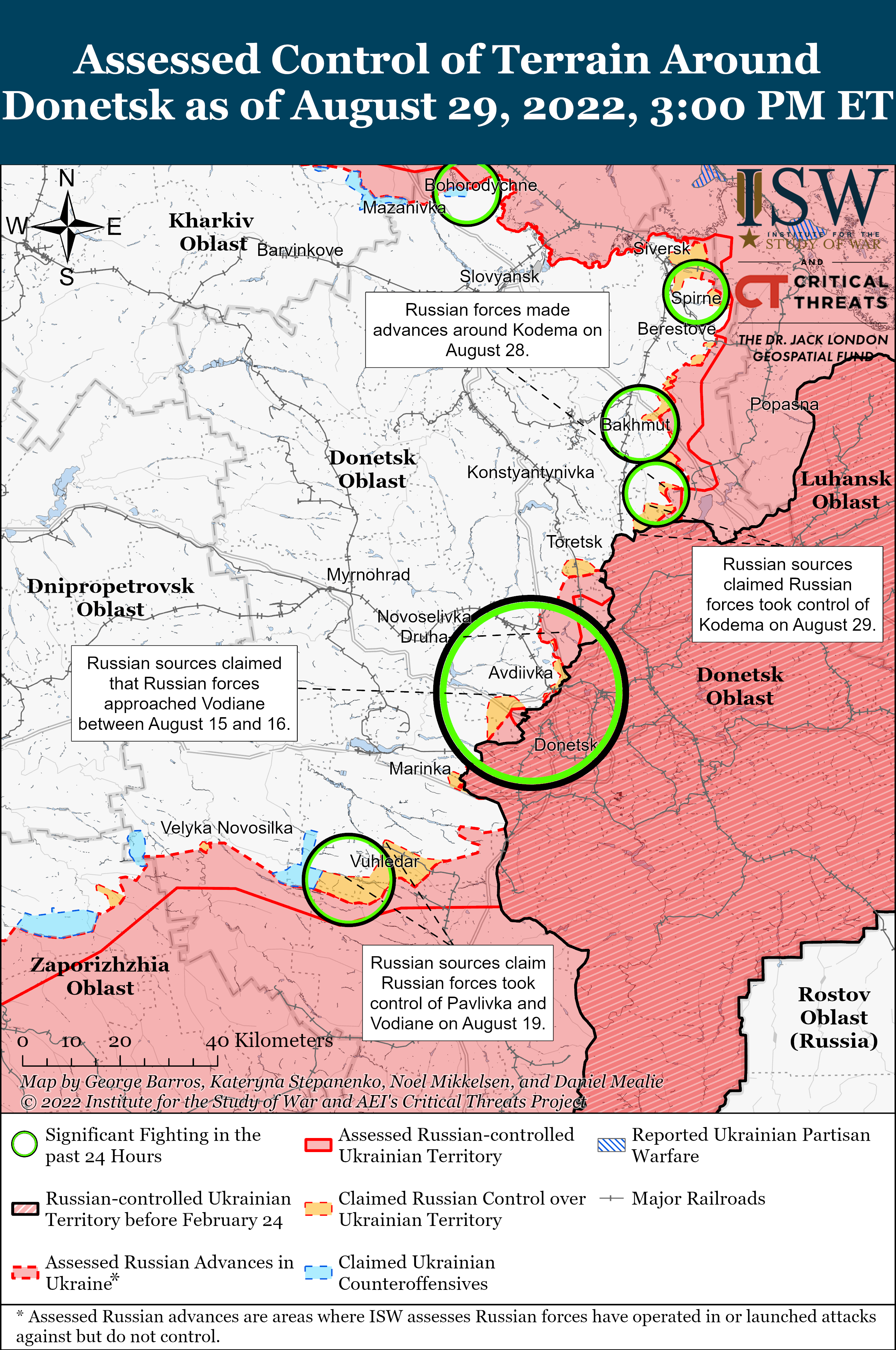 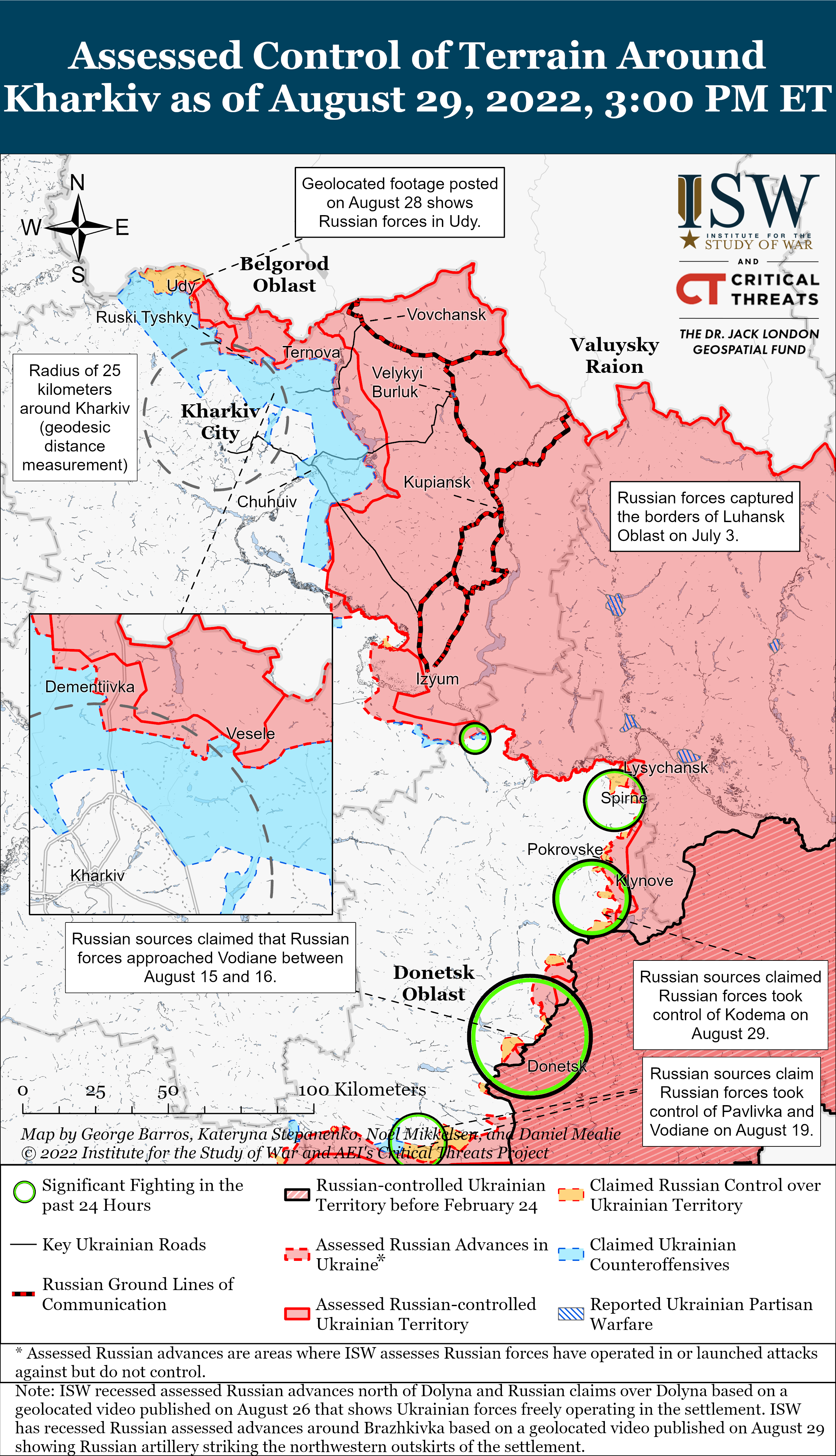 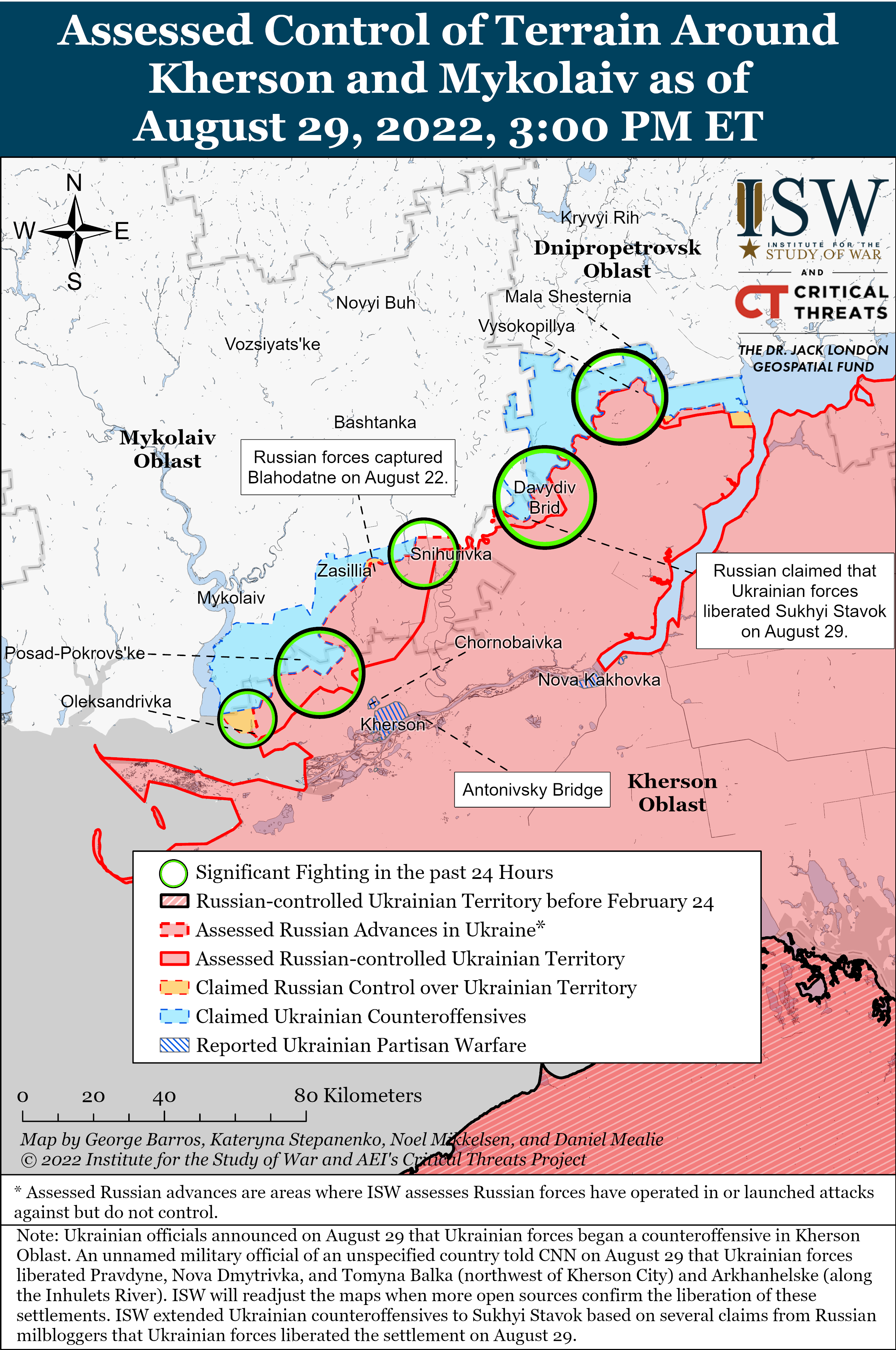 Russian federal subjects (regions) continued to report on the formation, deployment, and training of volunteer units to support the Russian invasion of Ukraine. Republic of Bashkortostan Head Radiy Khabirov announced that the “Shaimuratov” and “Dostavalov” volunteer battalions deployed to Ukraine on August 29. The Republic of Bashkortostan announced recruitment efforts for the volunteer battalions in late May.[lxxi] Head of North Ossetia Sergey Menyailo announced that North Ossetia will form the “Alagir” and “Nogir” volunteer battalions, in addition to the “Alania” Battalion that has been operating in Ukraine.[lxxii] A Russian milblogger reported that the St. Petersburg “Kronstadt,” “Neva,” and “Pavlovsk” battalions; Republic of Sakha (Yakutia) “Bootur” battalion; and 200 Cossacks in the “Don” volunteer detachment began training with volunteers that returned from fighting in Donbas on August 17.[lxxiii]

Russian federal subjects are aggressively advertising military contract service to generate more recruits. Arkhangelsk Oblast Governor Aleksandr Tsybulskiy announced that the Arkhangelsk Center for Patriotic Education of Youth, alongside other Russian veterans’ organizations, created a 10-day preparatory course to prepare volunteers for military service.[lxxiv] The Radio Free Europe/Free Liberty branch in northwestern Russia Sever.Realii stated that it is assumed that those who pass the training will sign contracts with the Russian Armed Forces.[lxxv] Local Novosibirsk outlets shared an image of an ad on the side of a bus in Novosibirsk for contract service with Wagner Group.[lxxvi]

Russian occupation authorities will likely intensify measures to crack down on intensifying partisan activity amid fears of a Ukrainian counteroffensive in southern Ukraine. Advisor to the Head of Kherson Oblast Serhiy Khlan warned Ukrainians in Hola Prystan to expect larger Russian filtration efforts as part of a wider crackdown on Ukrainian partisan activities.[lxxxvi]