Russian forces did not make any claimed or assessed territorial gains in Ukraine on August 26, 2022, for the first time since August 26, 2022.[1] However, Russian forces still conducted limited and unsuccessful ground attacks on the Eastern Axis on CorrectionA previous version of the text incorrectly stated "August 18" instead of "August 26."August 26.

The International Atomic Energy Agency (IAEA) stated that unspecified actors (but almost certainly Russian forces) reconnected part of the Zaporizhzhia Nuclear Power Plant (ZNPP) to the Ukrainian power grid on August 26.[2] Ukrainian nuclear operating enterprise Energoatom stated that unspecified actors reconnected one of the power units to the ZNPP and are working to add capacity to the ZNPP’s operations.[3] Russian forces remain in full control of the plant, though it is unclear why they would have reconnected the power unit.

However, Russian occupation authorities are unlikely to be able to carry out referenda as they intend (with cooperation from local collaborators) by the purported September 11 deadline due to continued frictions within occupation administrations and ongoing partisan attacks. The Ukrainian advisor to the head of Kherson Oblast, Serhiy Khlan, stated on August 26 that the Kherson occupation administration is struggling to find people to head administrative units in charge of referendum preparations, likely due to a lack of willing locals and low levels of trust in Ukrainian collaborators.[6] Khlan notably stated that Russian President Vladimir Putin may have ordered occupation administrators to avoid importing Russian administrators to fill these roles in order to make the referendum process appear like a grassroots initiative with local support.[7] Ukrainian sources have previously reported that Ukrainian resistance and increasing partisan attacks are inhibiting preparations for the referendum.[8] While Russian authorities could hypothetically forcibly annex Ukrainian territories on an arbitrary date, they are unlikely to do so without holding staged referenda. All observed indicators suggest that Russian authorities seek to create a veneer of local support and participation before conducting the referenda to frame them as widely supported initiatives but face ongoing setbacks that will delay any annexation effort. 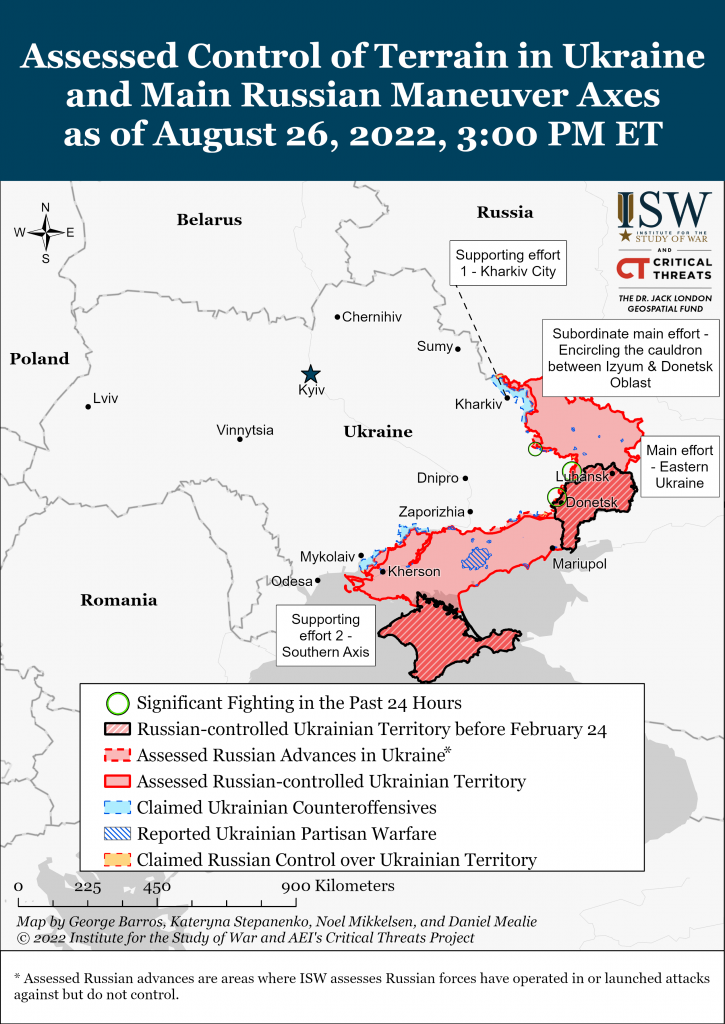 Russian forces conducted a limited ground attack southwest of Izyum on August 26. The Ukrainian General Staff reported that Russian troops attacked toward Karnaukhivka, 25km southwest of Izyum.[9] ISW has previously reported that limited Russian ground attacks southwest of Izyum are likely spoiling attacks to disrupt Ukrainian forces, rather than attacks intended to take territory along an axis of advance.[10] Russian forces continued artillery strikes along the Izyum-Slovyansk line near the Kharkiv-Donetsk Oblast border and additionally shelled a technical college in Slovyansk.[11]

Russian forces did not conduct any confirmed ground attacks toward Siversk on August 26 and fired on Siversk and surrounding settlements.[12]

Russian forces conducted a limited ground attack on the northwestern outskirts of Donetsk City on August 26. The Ukrainian General Staff stated that Russian troops attempted to improve their tactical position and advance toward Nevelske, less than 10km from the northwestern outskirts of Donetsk City and directly adjacent to Russian-occupied Pisky.[16] Russian forces also continued artillery strikes against Ukrainian positions along the Avdiivka-Donetsk City frontline.[17] 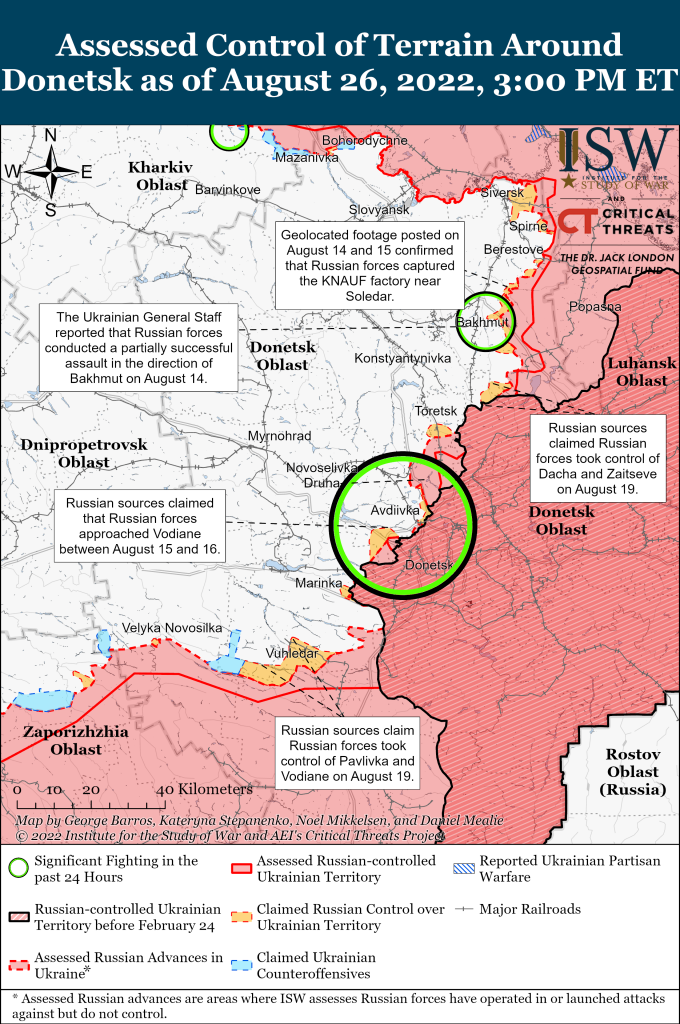 Russian forces did not conduct any confirmed ground attacks in northeastern Kharkiv Oblast on August 26. Ukrainian and Russian sources reported that Russian troops continued offensive operations to contest positions north of Kharkiv City and conducted air and artillery strikes along the line of contact.[20] 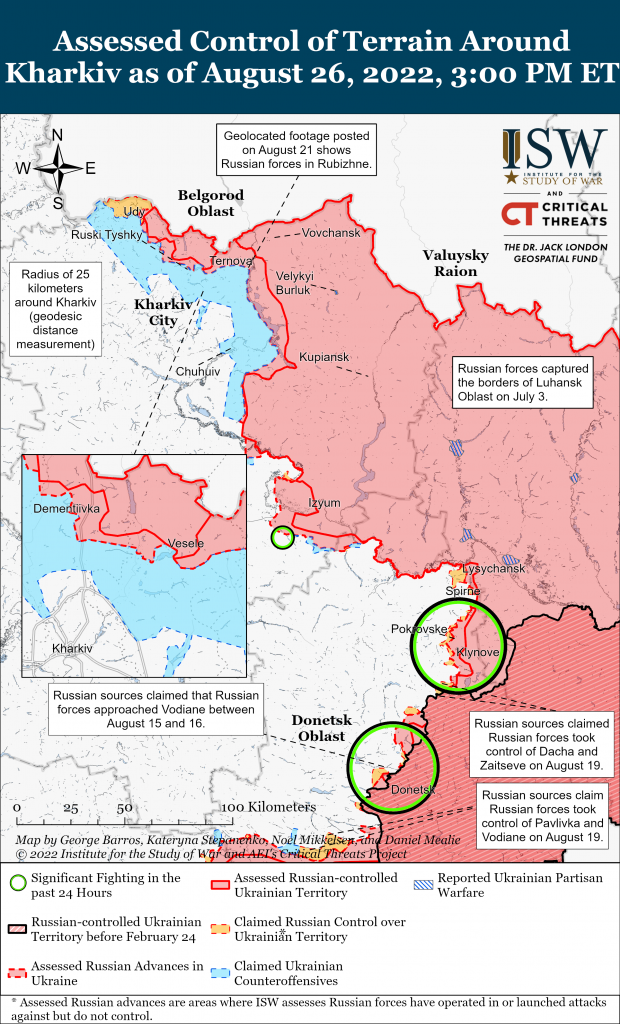 Russian sources claimed that Ukrainian forces continued to shell the Zaporizhzhia Nuclear Power Plant (ZNPP) on August 26. The Russian Ministry of Defense (MoD) accused Ukrainian forces of shelling the ZNPP’s oxygen-nitrogen station and an area of special building No. 1 on August 25-26.[23] Ukrainian sources separately reported that Russian forces struck Nikopol, Marhanets, and Chervonohryhorivka, all on the opposite bank of the Dnipro River from Enerhodar.[24] 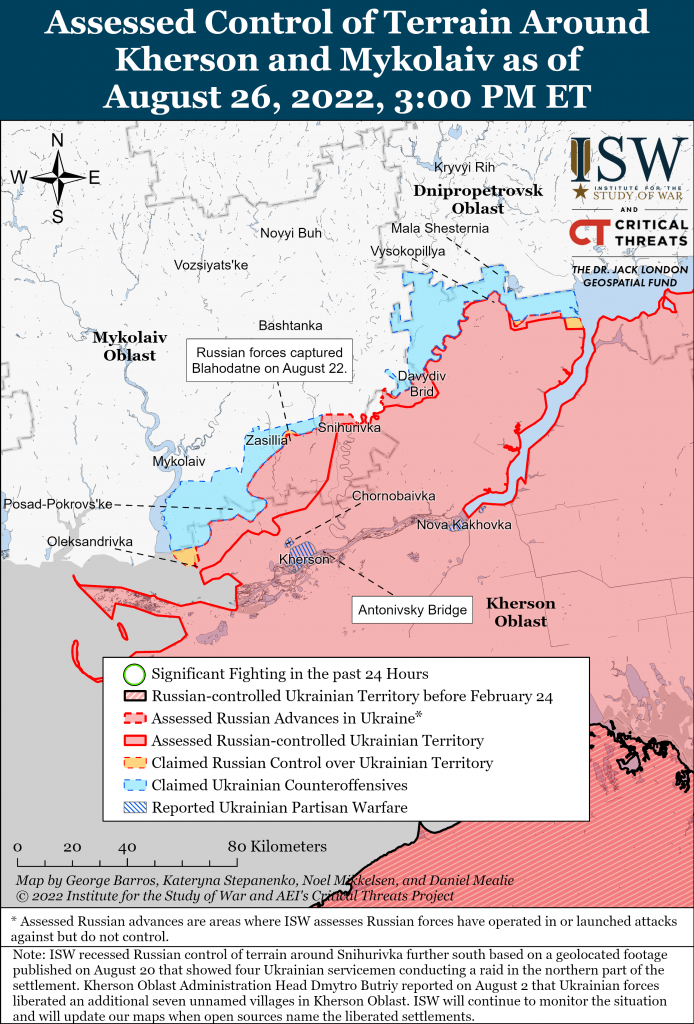 Russian federal subjects (regions) are launching additional recruitment drives for volunteer battalions, which continue to deploy to Ukraine. Local Primorye outlet Primorskaya Gazeta reported on August 26 that Prymorskyi Krai’s 240-man-strong “Tigr” volunteer battalion (which is part of the Russian 155th Separate Naval infantry Brigade) participated in its first combat operation in an unspecified location in Ukraine.[36] ISW first reported on the ”Tigr” Battalion on July 16.[37] Russian media also reported that Bashkortostan’s “Shaimuratov” and “Dostavalov” volunteer battalions are completing their training and will deploy to Ukraine at an unspecified date in the near future.[38] Local Russian media also reported that a few dozen Russian volunteers of Tyumen Oblast’s “Tobol” and “Tayga” battalions deployed to training grounds for combat training ahead of deploying to Ukraine.[39] Russian sources also confirmed the first combat losses among Russian prisoners who recently joined the Wagner Group.[40]

Russian federal subjects continue to increase offered salaries for volunteer fighters. Nenets Autonomous Okrug Governor Yuri Bezdudny announced on August 26 that the Nenets Autonomous Okrug tripled its one-time enlistment payment from 100,000 ($1,642) rubles to 300,000 rubles ($4,928) for personnel who signed service contracts with the Russian Ministry of Defense.[41] Chuvash Republic Governor Oleg Nikolayev announced on August 26 that the Chuvash Republic will increase one-time payments to volunteer fighters of the “Atal” Battalion from 200,000 rubles ($3,285) to 300,000 rubles ($4,928).[42]