Russian government sources confirmed that Russia is bringing Ukrainian children to Russia and having Russian families adopt them. Russian federal subject (region) Krasnodar Krai’s Family and Childhood Administration posted about a program under which Russian authorities transferred over 1,000 children from Mariupol to Tyumen, Irkutsk, Kemerov, and Altay Krai where Russian families have adopted them.[1] The Administration stated that over 300 children are still waiting to “meet their new families” and that citizens who decide to adopt these children will be provided with a one-time bonus by the state.[2] Ukraine’s Main Intelligence Directorate (GUR) additionally reported that Russian officials transferred 30 Ukrainian children from Khartsyzk, Ilovaysk, and Zuhres in occupied Donetsk Oblast to Nizhny Novgorod under the guise of having the children participate in youth educational-training programs.[3] The forcible transfer of children of one group to another “with intent to destroy, in whole or in part, a national, ethnical, racial or religious group“ is a violation of the Convention on the Prevention and Punishment of the Crime of Genocide.[4]

Russian authorities are deploying security forces to Luhansk Oblast likely in response to waning support for the war and growing unwillingness to fight among Luhansk residents. The LNR Internal Ministry reported on August 23 that LNR Internal Ministry personnel conducted joint patrols with consolidated police detachments from the Internal Ministries of St. Petersburg and Leningrad Oblast in Starobilsk, Shchastya, and Stanystia, occupied Luhansk Oblast.[5] The LNR Internal Ministry also reported on August 22 that Rosgvardia (Russian national guard) units conducted security for Russian Flag Day celebrations in Starobilsk.[6] Ukraine‘s Main Intelligence Directorate (GUR) reported that Rosgvardia elements in Dovzhansk (formerly Sverdlovsk), Luhansk Oblast are not subordinate to the local LNR forces and that Rosgvardia conducted a search of an LNR official in Dovzhansk.[7] The deployment of Russian security forces to police occupied areas of Luhansk Oblast supports ISW’s previous assessment that LNR residents and possibly militia forces may be unwilling to continue fighting now that they have reached the Luhansk Oblast borders.[8] Recent intensified Russian efforts to forcibly mobilize residents in Luhansk likely exacerbated this disillusionment, and Russian authorities may be increasing Russian security forces’ presence in Luhansk to suppress any internal instability and/or because they are losing confidence in indigenous Luhansk forces.[9]

Russian authorities’ deployment of Rosgvardia elements to security duties in occupied Luhansk Oblast diverts these forces from operations elsewhere in Ukraine, likely contributing to the broader Russian failure to translate limited tactical gains into operational successes. ISW previously assessed that Russian forces had likely exhausted their momentum from territorial gains around Avdiivka and Bakhmut, Donetsk Oblast – a very small section of the whole Ukrainian theater – partially due to their inability to allocate sufficient resources to offensive operations.[10] LNR forces’ unwillingness to fight in the war, coupled with Rosgvardia forces’ presence in the rear instead of near the front will likely contribute to continued Russian failures to make significant territorial gains.

Unverifiable sources reported that axis commanders in Ukraine are reporting directly to Russian President Vladimir Putin, bypassing both the Russian Ministry of Defense (MoD) and Chief of General Staff Valery Gerasimov in the chain of command. Independent Russian outlet Vazhnye Istorii or iStories quoted unnamed sources within the Russian General Staff stating that Russian Defense Minister Sergey Shoigu has lost Putin’s trust after the initial phase of the full-scale invasion of Ukraine that failed despite Shoigu’s assurances of a swift victory.[15] The sources claimed that Putin now bypasses Shoigu and interacts directly with Commander of Central Military District Alexander Lapin who oversees of the “central” group of forces in Ukraine, and the Commander of the Russian Aerospace Forces Sergey Surovikin who commands the “southern” group of forces. ISW cannot independently verify the validity of this report, but if the report is true, it indicates that Putin is also bypassing Gerasimov. 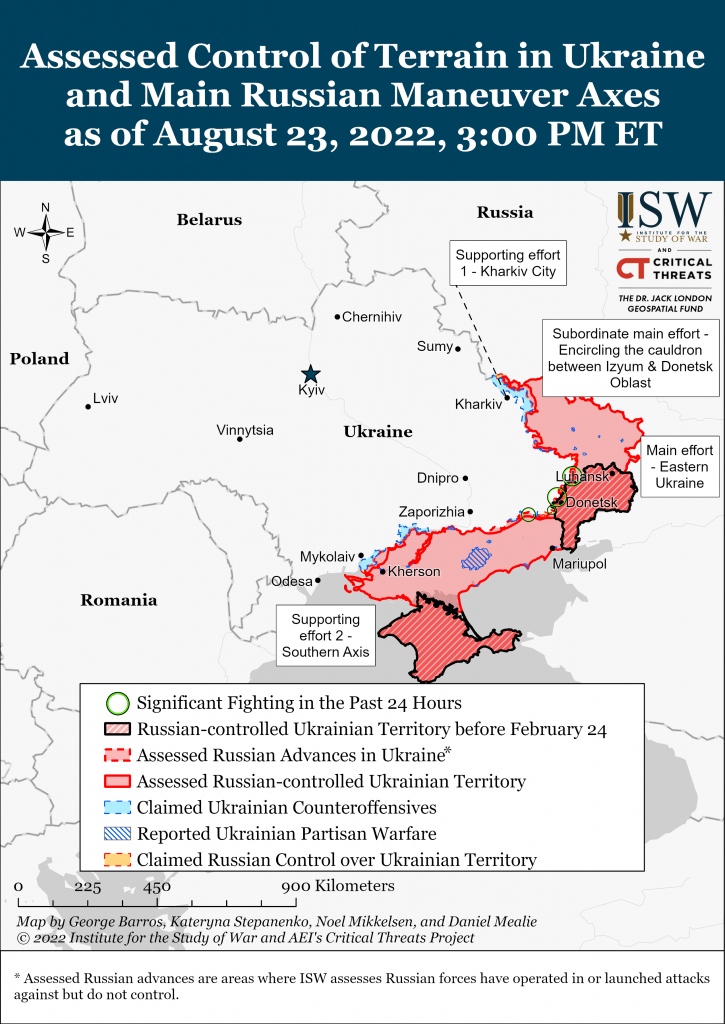 Russian forces did not conduct any confirmed ground attacks between Izyum and Slovyansk on August 23. A Ukrainian volunteer claimed that Russian troops launched several attacks around Izyum on August 22 but did not specify exactly where these attacks occurred.[16] The Ukrainian General Staff additionally reported that Russian forces conducted airstrikes on Bohorodychne (20km northwest of Slovyansk) and continued shelling settlements near the Kharkiv-Donetsk Oblast border.[17]

Russian forces did not conduct any confirmed ground attacks towards Siversk on August 23. Siversk’s Civil Military Administration reiterated that the city remains under Ukrainian control but that Russian forces constantly conduct artillery strikes on Siversk and surrounding environs.[21] 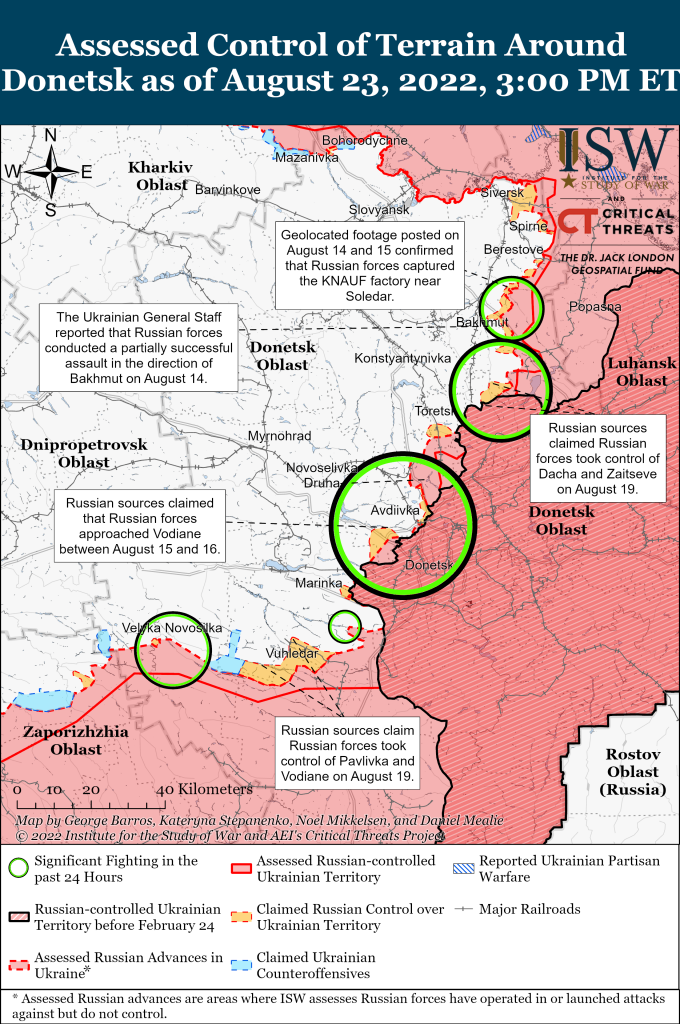 Russian forces did not conduct any confirmed ground assaults around Kharkiv City on August 23. The Ukrainian General Staff reported that Russian forces focused on maintaining current positions.[30] The Derhachi City Council reported that Ukrainian forces attempted to break through Russian defensive lines near Dementiivka, west of Kozacha Lopan, and towards Velykii Prokhody and Tsupivka, all north of Kharkiv City, which may suggest that Ukrainian forces are continuing limited ground attacks to contest Russian-held lines in northern Kharkiv Oblast.[31] Russian forces conducted airstrikes near Pytomnyk, Kostyantynivka and Verkhnii Saltiv.[32] Russian forces continued shelling Kharkiv City and settlements along the line of contact.[33] 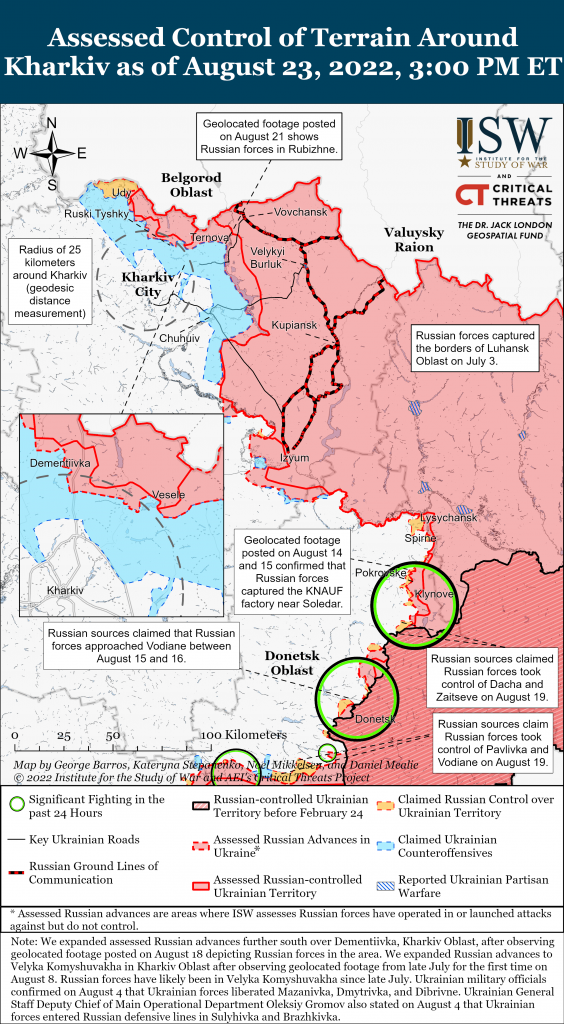 Ukrainian military officials claimed several strikes on Russian positions, ammunition depots, and ground lines of communication (GLOCs) in Kherson Oblast. The Ukrainian Southern Operational Command reported that Ukrainian missile and artillery units destroyed the ammunition depot and command post of the Russian 247th Airborne Assault Regiment of the 7th Guards Air Assault Division in Chornobaivka northwest of Kherson City and struck the command post of the 331st Guards Airborne Regiment of the 98th Guards Airborne Division in Novovoskresenke just south of the Kherson-Dnipropetrovsk Oblast border.[40] Elements of the 331st Regiment had previously operated near Hostomel, Kyiv Oblast, in February March and suffered heavy losses.[41] It is unclear how long elements of the 331st Regiment have been operating in Kherson Oblast.[42] Elements of the 247th Regiment have been operating in Kherson Oblast since February 24, the first day of Russia’s full-scale invasion of Ukraine.[43] The Ukrainian Southern Command also confirmed Ukrainian strikes on the Antonivsky and Kakhovka bridges over the Dnipro River, and the destruction of a Russian ammunition depot in Kakhovka on August 22.[44]

Ukrainian officials reported that Russian forces continued to accumulate military equipment at the Zaporizhzhia Nuclear Power Plant (ZNPP) and are setting conditions to manipulate the public’s perception of the situation in Enerhodar. Ukrainian state energy enterprise Enerhodar reported that Russian forces deployed 40 pieces of military equipment to the ZNPP: 16 military vehicles at the first power unit; seven vehicles near the second power unit; 12 vehicles under an overpass; and two armored personnel carriers and six special trucks in the ZNPP repair zone.[48] The Ukrainian Main Military Intelligence Directorate (GUR) reported that Russian forces have been deliberately targeting ash pits at the Zaporizhzhia Thermal Power Plant (ZTPP) about 5km east of ZNPP with mortars.[49] The GUR stated that ZTPP produces dust-like waste in the ash pits, which contain toxic substances and a radiation level 1.5 times above normal levels. The GUR argued that by striking the ash pits, Russian forces can create a cloud of smoke with radioactive dust for which Russian forces can blame Ukraine. 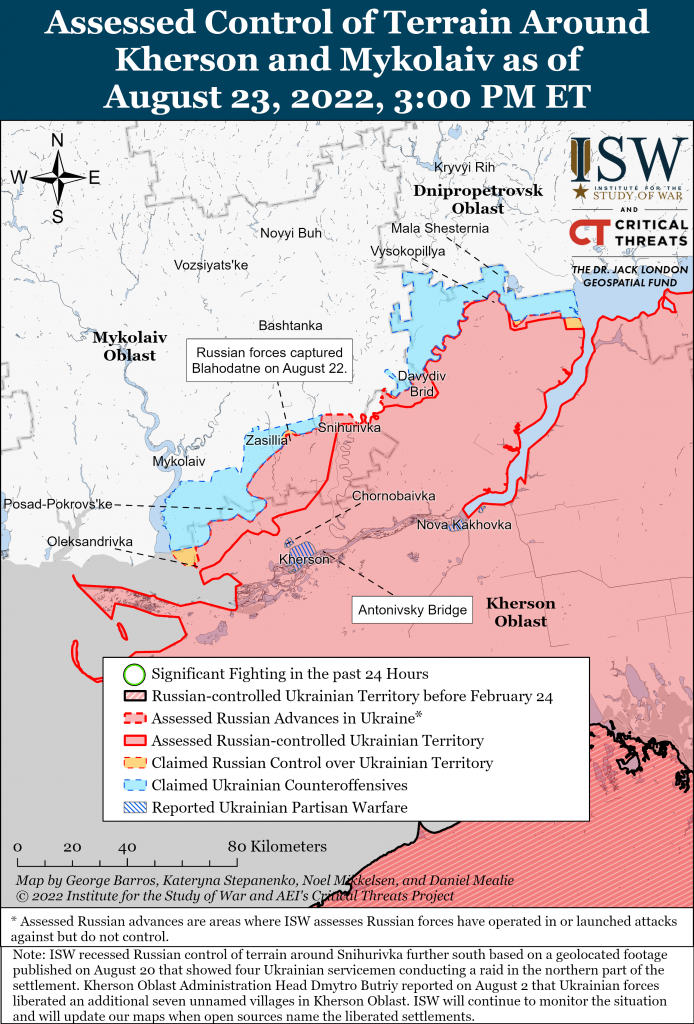 Russian federal subjects (regions) are continuing to increase one-time enlistment bonuses for recruits, likely due to a shortage of interested volunteers. Samara Oblast Governor Dmitry Azarov announced that recruits for the “Samara” Volunteer Battalion – part of the newly-forming 3rd Army Corps - will receive a bonus of 300,000 rubles (about $4,980) instead of the originally-promised 200,000 rubles (about $3,320).[53] Oryol Oblast officials also announced an additional payment of 100,000 rubles (about $1,660) to all Russians with a permanent address within or outside of Oryol Oblast ordered to serve in the 3rd Army Corps.[54] ISW has previously reported that the republics of Buryatia and Tatarstan increased their one-time enlistment bonuses by 100,000 rubles (about $1,660). Other Russian federal subjects are also likely increasing payments to generate more volunteers for the 3rd Army Corps or for regional volunteer units.[55] It is also unclear if the volunteer battalions in Buryatia and Tatarstan will join the 3rd Army Corps.

Russian federal subjects are forming specialized military units with likely volunteers without prior military experience. The Republic of Udmurt claimed to have recruited seven volunteers who are currently undergoing training in Tolyatti for the “Italmas” SPETSNAZ unit.[56] Local military recruitment centers in Udmurt announced the recruitment for the ”Italmas” unit on July 23 and did not specify previous military experience as a requirement.[57] There was no information about the ”Italmas” unit prior to this July 23 announcement, suggesting that it is a new volunteer unit. Some local outlets claimed that the unit is recruiting reservists, while others noted that anyone interested in signing a military contract with the unit may do so at a local military recruitment center.[58] The recruitment of only seven volunteers since late July further confirms that Russian federal subjects continue to face challenges in recruiting the planned number of volunteers. Tatarstan local outlets also reported that 21 recruits are undergoing combat coordination activities in Orenburg Oblast with the ”Alga” and ”Timer” volunteer battalions, despite previously claiming to have recruited over 300 volunteers as of June 23.[59]

Russian occupation officials continue preparations to hold annexation referenda in occupied Ukraine. A Luhansk People’s Republic (LNR) official indicated on August 23 that Luhansk residents now residing in Russia will still be eligible to vote in the annexation referendum, supporting ISW’s prior assessments that occupation authorities seek to accelerate preparations for annexation referenda.[68] LNR Deputy Internal Minister Vitaly Kiselev announced that Luhansk Oblast residents who left Luhansk Oblast for Russia will be able to vote on the LNR referendum for Russian annexation.[69] Kiselev claimed that voter turnout will be 100% and that 70% of voters will vote in favor of annexation.[70] Kiselev claimed that the number of people in occupied territories who applied for Russian passports indicates widespread desire to join Russia.[71]

Russian occupation officials are continuing efforts to establish Russian schools in occupied Ukraine. The GUR reported that Russian authorities attempted to reopen 43 educational facilities with Russian teachers and collaborators in occupied Ukraine.[72] The GUR also reiterated prior reporting that occupation officials are threatening to fine Ukrainian parents who do not send Ukrainian children to the occupation-established schools.[73] Donetsk People’s Republic (DNR) Head Denis Pushilin announced that DNR and Russia will cooperate to ensure children in occupied Donetsk Oblast have access to education and educational supplies.[74]

[1] The original post has since been removed from the administration website, but Ukrainian sources reposted screenshots of the post and ISW was able to locate an archived version.