Russian sources reported explosions across Crimea—possibly caused by Russian air defenses, Ukrainian reconnaissance, or a Ukrainian attack—the night of August 18. Three local sources told Reuters that at least four explosions struck around Belbek Airbase in Russian-occupied Crimea, near Sevastopol.[2] The Russian-appointed governor of Sevastopol, Mikhail Razvozhaev, claimed that preliminary information indicated that Russian air defenses shot down a Ukrainian drone and caused no damage.[3] Video of a large explosion that circulated on social media in the immediate aftermath of the reported explosions was from a previous engagement on August 8 and is not from the vicinity of the airbase.[4]

Russian sources also claimed that Russian air defenses shot down a drone near the Kerch Bridge between Crimea and Russia on the night of August 18 as social media footage showed active air defenses in the area.[5] Ukrainian Presidential Advisor Mykhailo Podolyak had tweeted on August 17 that the Kerch bridge was illegally constructed and ”must be dismantled.”[6] The railway side of the Kerch bridge is an important target for Ukraine to disrupt Russian logistics capabilities into occupied Ukraine. Social media videos also claimed to depict active Russian air defenses at a Russian base in Nova Kakhova in southern Kherson oblast the night of August 18, suggesting a possibly coordinated series of Ukrainian attacks, if there were attacks, or drone overflights.[7]

ISW cannot independently verify whether Russian air defenses shot down a Ukrainian UAV, or whether any UAV was present in Kerch or Belbek. A Russian social media user posted video claiming to be at Belbek on the evening of August 18, showing no apparent evidence of a strike there.[8] Ukrainian forces will likely continue their campaign to strike Russian military targets in Russian-occupied Crimea to degrade Russian logistics capabilities and degrade Russian capabilities to sustain operations on the west bank of the Dnipro River, as ISW previously assessed.[9] However, it is unclear at the time of publication whether the reported explosions are due to Ukrainian attacks or reconnaissance, poor Russian handling of military equipment, successful Russian air defenses, or nervous Russian defenders who are likely steeling themselves for additional attacks in areas that the Russian military had believed until now to be out of the range of Ukrainian forces.

The Russian Ministry of Defense (MoD) appears to be setting information conditions to blame Ukrainian forces for future false flag operations at the Zaporizhzhia Nuclear Power Plant (NPP). The chief of Russia’s Radiation, Chemical, and Biological Defense Forces, Lieutenant General Igor Kirillov, claimed in an August 18 briefing that Ukrainian forces are preparing for a provocation at the Zaporizhzhia NPP and that the provocation is meant to coincide with UN Secretary General Antonio Guterres’ visit to Ukraine.[10] Kirillov accused Ukrainian forces of preparing to stage this provocation in order to blame Russia for causing a nuclear disaster and create a 30km-wide exclusion zone around the NPP.[11] Kirillov’s briefing, which was amplified by the Russian MoD, coincides with reports that Russian authorities told Russian NPP employees to not come in to work tomorrow, August 19.[12] Leaked footage from within the plant shows five Russian trucks very close to one of the reactors at the NPP on an unspecified date, which may indicate the Russian forces are setting conditions to cause a provocation at the plant and to shift the information narrative to blame Ukraine for any kinetic events that occur on the territory of the plant.[13] 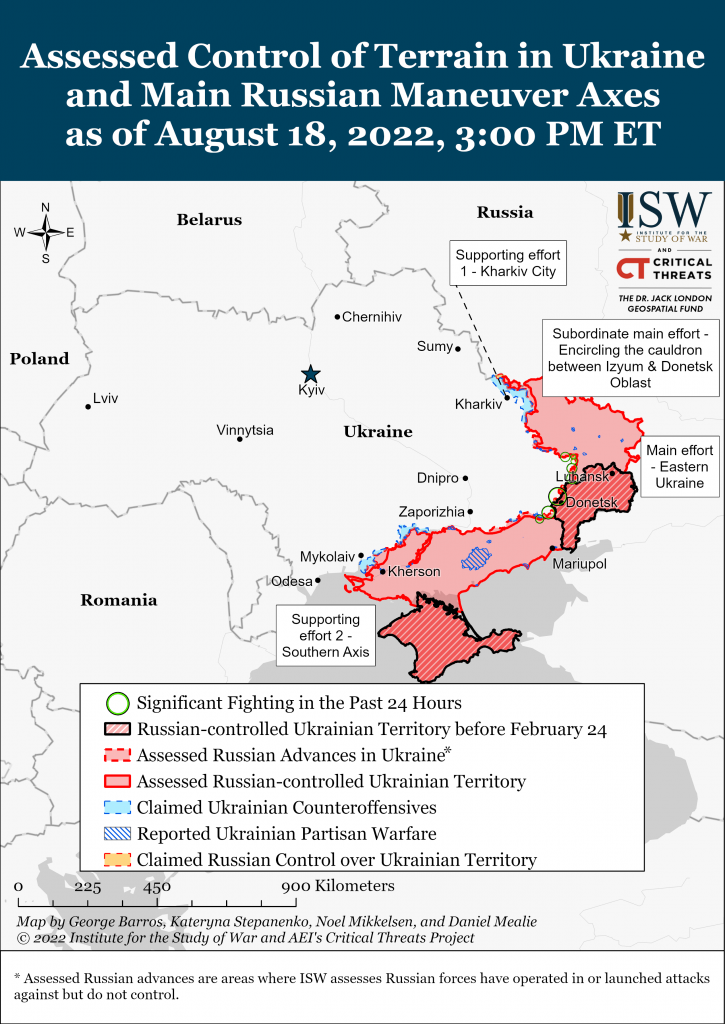 Russian forces did not conduct any confirmed ground attacks along the Izyum-Slovyansk line and shelled settlements near the Kharkiv-Donetsk Oblast border on August 18.[14] The Russian Ministry of Defense claimed that a Russian artillery strike targeted Ukrainian positions in Mazanivka (about 20km northwest of Slovyansk), confirming ISW’s control of terrain assessment that Ukrainian forces have pushed Russian troops out of the settlement.[15]

Russian forces attempted to advance on Siversk from the south on August 18. The Ukrainian General Staff reported that Russian troops unsuccessfully attempted to advance from Mykolaivka (about 15km southwest of Siversk) to Vyimka (about 5km southeast of Siversk).[16] Russian sources claimed that Russian troops are continuing to fight along the eastern ring of Siversk in the vicinity of Serebryanka, Verkhnokamyanske, and Ivano-Darivka.[17] Russian troops also continued artillery and air strikes on Siversk and surrounding settlements.[18]

Russian forces continued ground attacks northeast and south of Bakhmut on August 18. Russian troops continued efforts to advance southwest on Bakhmut along the T1302 highway from Soledar and reportedly attempted to advance from Volodymyrivka to Soledar.[19] The Ukrainian General Staff reported that Russian troops attempted to advance on Bakhmut from Pokrovske, about 10km east of Bakhmut.[20] Russian forces, reportedly including Wagner Group mercenaries, continued pushing north on Bakhmut from Klynove, Kodema, and Semihirya, all within roughly 15km of the southern outskirts of Bakhmut.[21] The Ukrainian General Staff reported that Russian forces are attempting to advance on Bakhmut from the northern outskirts of Horlivka in the area of Holmivsky and Zaitseve.[22] Russian operations near Horlivka are likely intended to gain access to the T0513 Horlivka-Bakhmut highway, which indicates that Russian forces are likely attempting to advance on Bakhmut along three lines: from Horlivka to the southwest along the T0513, from Soledar to the northeast along the T1302, and from the Klynove-Vershyna area along the E40 highway. 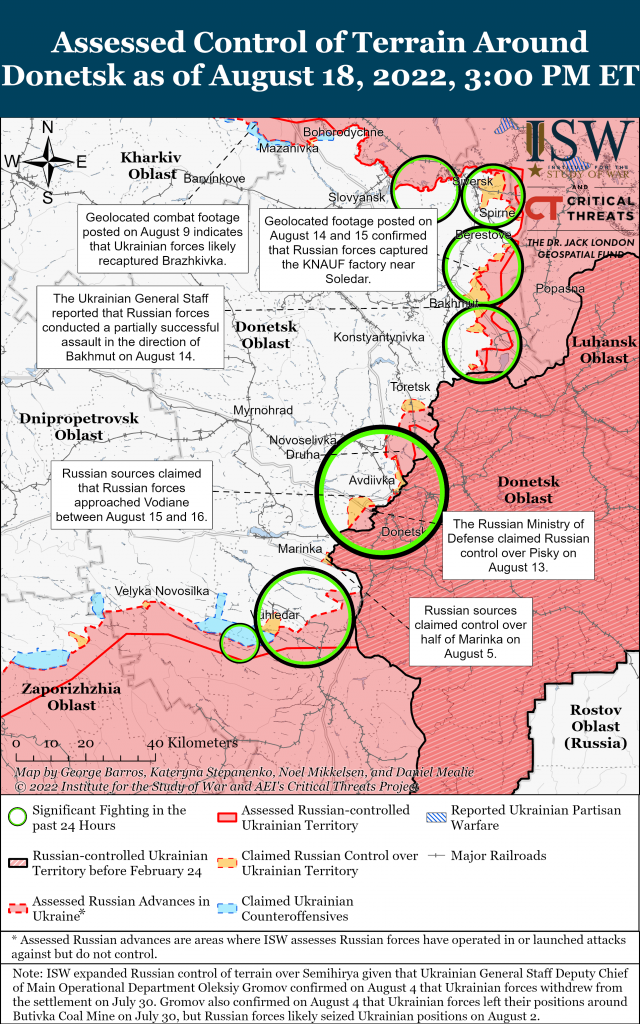 Russian forces did not conduct any confirmed ground attacks along the Kharkiv City axis on August 18. The Ukrainian General Staff reported that Russian forces focused on holding occupied positions and preventing Ukrainian counterattacks.[29] Russian forces deployed an unspecified number of additional electronic warfare systems and a battalion tactical group (BTG) in the Kharkiv City direction in an attempt to restore the combat capability of units already stationed around Kharkiv City.[30] Russian BTGs that have been engaged in combat are likely badly understrength and will add relatively little combat power. Volunteer battalions have deployed with very limited training and would add far less combat power than their numbers suggest. Russian troops continued remote mining near Lebyazhne (about 40km southeast of Kharkiv City), indicating Russian forces seek to restrain Ukrainian attacks in the direction of Russia’s ground lines of communication along the Izyum axis.[31] Russian sources continued to repeat previous unsubstantiated claims of Russian control of Stohnii, Baranivka, Odnorobivka, and Udy (all about 40km north of Kharkiv City and within 10km of the Ukraine-Russia border).[32] 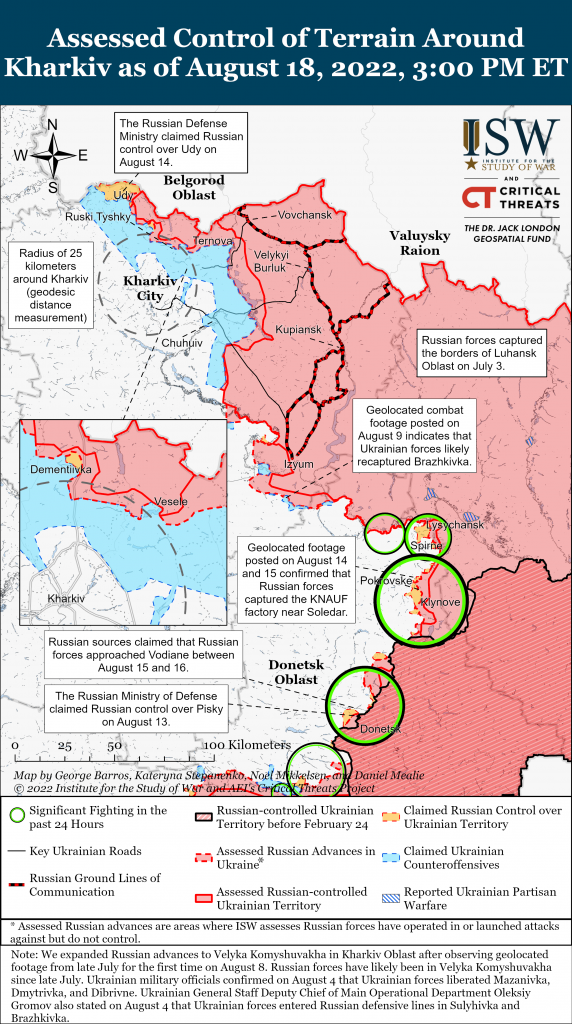 Russian forces conducted a limited and unsuccessful ground assault on the Zaporizhia axis on August 18. The Ukrainian General Staff reported that Russian forces unsuccessfully attempted to advance from Yehorivka to Shevchenkove, both east of the Donetsk-Zaporizhia Oblast administrative border.[36] The Ukrainian General Staff also reported that Russian forces reinforced an unspecified area along the Southern Axis with at least two battalion tactical groups (BTGs), indicating a continued Russian effort to reinforce the south in preparation for Ukrainian counterattacks. These BTGs are unlikely to increase Russian combat power materially.

Russian forces continued to target settlements in Dnipropetrovsk and Mykolaiv Oblasts using artillery and missiles on August 18. Ukrainian officials reported that Russian forces used tube artillery to shell Nikopol, located across the Dnipro River from Russian-occupied positions in Zaporizhzhia Oblast, and other settlements throughout Dnipropetrovsk Oblast.[40] The Ukrainian Southern Operational Command reported that Russian forces launched two anti-radar missiles from a Su-35 aircraft in the Bakhtanka and Mykolaiv directions and continued shelling other settlements throughout Mykolaiv Oblast.[41] 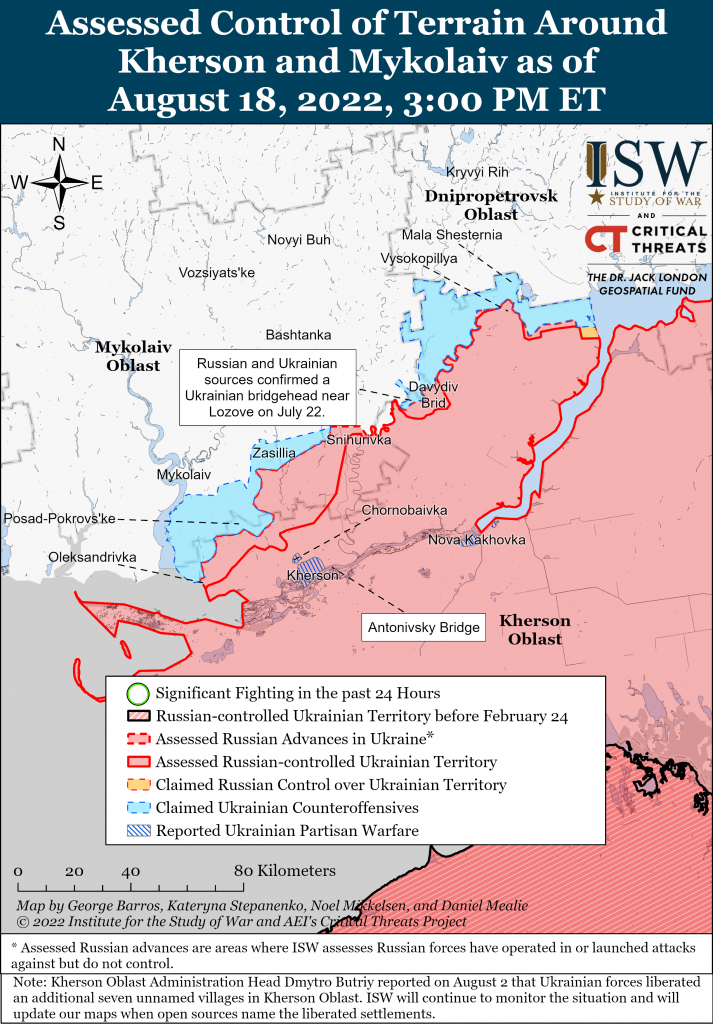 The Kremlin is likely leveraging established Cossack organizations to support Russian force generation efforts. Formal Russian Cossack organizations are paramilitary formations that perform state services, including law enforcement and military administrative tasks, in accordance with Russian Federal Law.[44] Russian daily newspaper Kommersant reported that the All-Russian Cossack Society formed a 250 man-strong Cossack “Terek” detachment which is currently completing its preparations to deploy to Ukraine.[45] The Terek detachment reportedly includes military specialists with scout, sniper, and machine gunner experience with personnel drawn from Stavropol Krai, Dagestan, North Ossetia, Kabardino-Balkaria, and the Chechen Republic. It is unclear whether there are established Cossack organizations in predominantly Muslim federal subjects, such as Chechnya and Dagestan, from which ”Cossacks” might be recruited given that Cossack culture and history are traditionally hostile to Islam.[46] Russian Cossack organizations may be helping train Russian recruits due the ineffectiveness or limitations of other more conventional Russian recruitment organs. Kommersant additionally reported that the All-Russian Cossack Society has deployed seven volunteer units (of unspecified echelon) to Ukraine, is preparing three volunteer units for deployment, and has over 6,000 Cossacks supporting the war in Ukraine in unspecified capacities.

Russian volunteer units and forcibly mobilized Ukrainian citizens are unlikely to generate effective Russian combat power due to their low morale, poor equipment, and lack of training. Mari El Republic Governor Yuri Zaitsev stated that of approximately 430 Mari Eli residents who deployed to Ukraine in volunteer formations, at least 58 died.[49] This report suggests that the unit likely suffered a total casualty rate (killed and wounded) of 40 percent given the normal ration of three wounded-in-action for every fatality. A Ukrainian citizen who was mobilized in Luhansk on August 3 to fight for Russian forces (and who Ukrainian forces captured no later than August 18) testified that Russian forces provided him with a shirt, an old iron helmet, and no shoes and stated that his infantry unit had no armor support and had to walk on foot during combat.[50]

The Ukrainian Resistance Center reported on August 18 that Russian occupation authorities are planning to conduct door-to-door “surveys” of households in occupied Melitopol from September 11-17 in lieu of in-person voting for the Kremlin’s sham annexation referendum.[51] The Resistance Center claimed that Russian forces are conducting such easily falsifiable surveys because the referendum will have low turnout and urged Ukrainian civilians to evacuate occupied areas before the referendum takes place to avoid participation. The Center also reported that Ukrainian partisan activity forced the Russian military to transfer forces away from the front lines to secure the sham referendum.[52]

Russian occupation authorities are taking steps to restore some industrial, housing, and media capacity in occupied Ukrainian territory. These reconstruction efforts appear to be largely in service of Russian government campaigns to create administrative capabilities in occupied areas, to enhance or reinforce Russian logistical supply lines, and to wage an information war in occupied parts of Ukraine, thereby acclimating Ukrainian civilians to the Russian occupation. “Reconstruction” efforts do not appear to be meeting even basic needs of civilians in occupied areas, who face the approaching winter without heat in parts of the country.