Russian military leadership is likely increasingly losing confidence in the security of Crimea following recent Ukrainian strikes on Russian military objects in Crimea. Russian sources reported on August 17 that Vice Admiral Viktor Sokolov had replaced Admiral Igor Osipov as the commander of the Crimean-based Black Sea Fleet (BSF).[1] The Russian information space, however, was evidently eager to maintain a high level of secrecy regarding Sokolov’s appointment due to the claimed threat of “terrorist danger” in Sevastopol.[2] Recent Ukrainian strikes (associated with Ukrainian partisans and Ukrainian Armed Forces) on Russian military assets in Crimea, including the headquarters of the BSF in Sevastopol, have likely placed Russian forces on high alert and led to restructuring of force composition, logistics, and leadership of the Russian grouping in Crimea in order to mitigate the impact of further strikes. Ukraine’s Main Military Intelligence Directorate, for example, reported that Russian forces are relocating dozens of fixed and rotary wing aircraft stationed in forward airfields in Crimea to areas deeper in the Crimean Peninsula and in mainland Russia.[3]

Russian leadership and the Russian nationalist information space have become increasingly invested in framing recent Ukrainian strikes on Russian military assets in Crimea as acts of terrorism in order to shift the information narrative away from Russian violations of international law and calls on the West to designate Russia a state sponsor of terrorism. Russian sources inaccurately described the strikes on the BSF headquarters, an ammunition depot, and the Saki Airbase as acts of terrorism. The Russian-appointed head of occupied Crimea, Sergey Askenov, claimed on August 17 that the Russian Federal Security Service (FSB) in Crimea had neutralized cells of the Hizb ut-Tahrir organization (an Islamist fundamentalist political organization that has historically been active in Central Asia and in Crimea amongst the Crimean Tatar community and is banned in Russia) in Dzhankoi and Yalta.[4] Aksenov accused the Ukrainian government of coordinating Hizb ut-Tahrir's operations in Crimea without providing any evidence. Russian officials will likely increasingly link Ukrainian partisan attacks against occupied territories with operations conducted by organizations affiliated with Islamist extremism in an attempt to alienate the Ukrainian partisan movement from the international community and undermine Ukraine’s calls to officially designate Russia as a state-sponsor of terrorism. Attacks against legitimate Russian military targets fall well within the purview of legal use of force and are not acts of terrorism, nor is there any evidence to suggest that Islamist extremists conducted these attacks.[5] 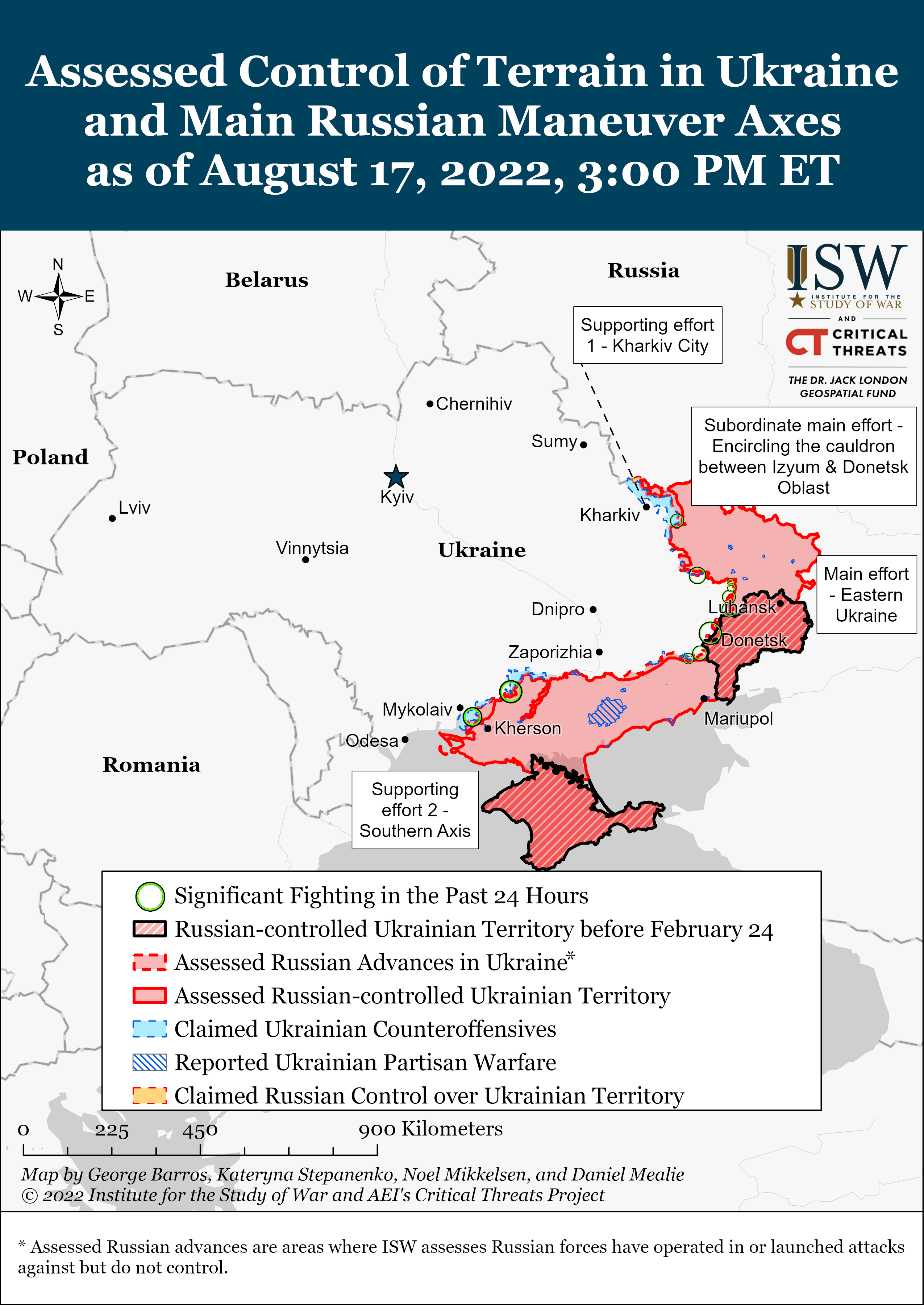 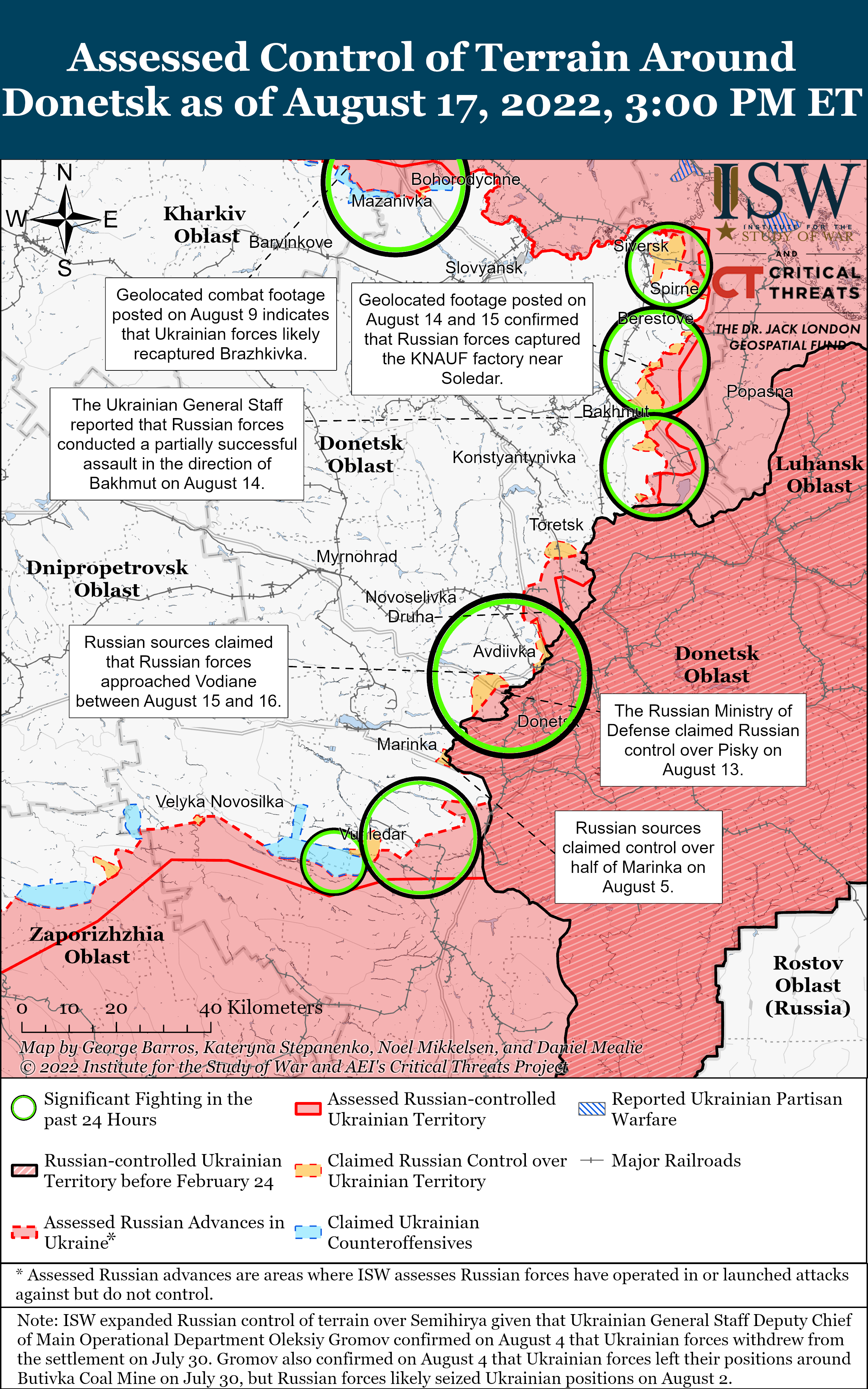 Russian forces conducted a series of ground attacks northeast and south of Bakhmut on August 17. Ukrainian and Russian sources reported that Russian forces are fighting in the Soledar-Bakhmutske area (10km northeast of Bakhmut).[13] Units of the Luhansk People’s Republic (LNR) 6th Cossack Regiment continued attempts to consolidate control of the Knauf Gips Donbas gypsum factory on the outskirts of Soledar along the T1302 highway in order to advance southwestward on Bakhmut.[14] The Ukrainian General Staff also reported that Russian troops conducted ground assaults in Bilohorivka, about 18km northeast of Bakhmut along the T1302 highway.[15] Russian operations to the northeast of Bakhmut are likely focused on securing control of this segment of the T1302 in order to drive directly on Bakhmut.

Russian forces conducted ground assaults south of Bakhmut in order to improve their tactical positions in this area.[16] The Ukrainian General Staff reported that Ukrainian troops stopped Russian ground attacks near Mayorsk, Zalizne, and Shumy, which all lie about 25km southwest of Bakhmut on the outskirts of Horlivka.[17] Russian forces are likely conducting limited ground attacks southwest of Bakhmut in order to gain access to the T0513 highway via the T0516 roadway, which runs westward through Horlivka. Russian forces additionally continued fighting near Kodema and Zaitseve, within 15km and 7km south of Bakhmut, respectively.[18]

Russian forces made marginal gains during ground attacks northwest of Donetsk City on August 17. The Ukrainian General Staff reported that Russian troops had “partial success” in the direction of Optyne, about 6km northwest of the outskirts of Donetsk City.[19] Donetsk People’s Republic (DNR) troops reportedly attempted to advance on Nevelske (15km west of Donetsk City) under cover of artillery fire.[20] Russian forces continued to conduct artillery strikes along the Avdiivka-Donetsk City frontline to support efforts to push west of this area.[21] 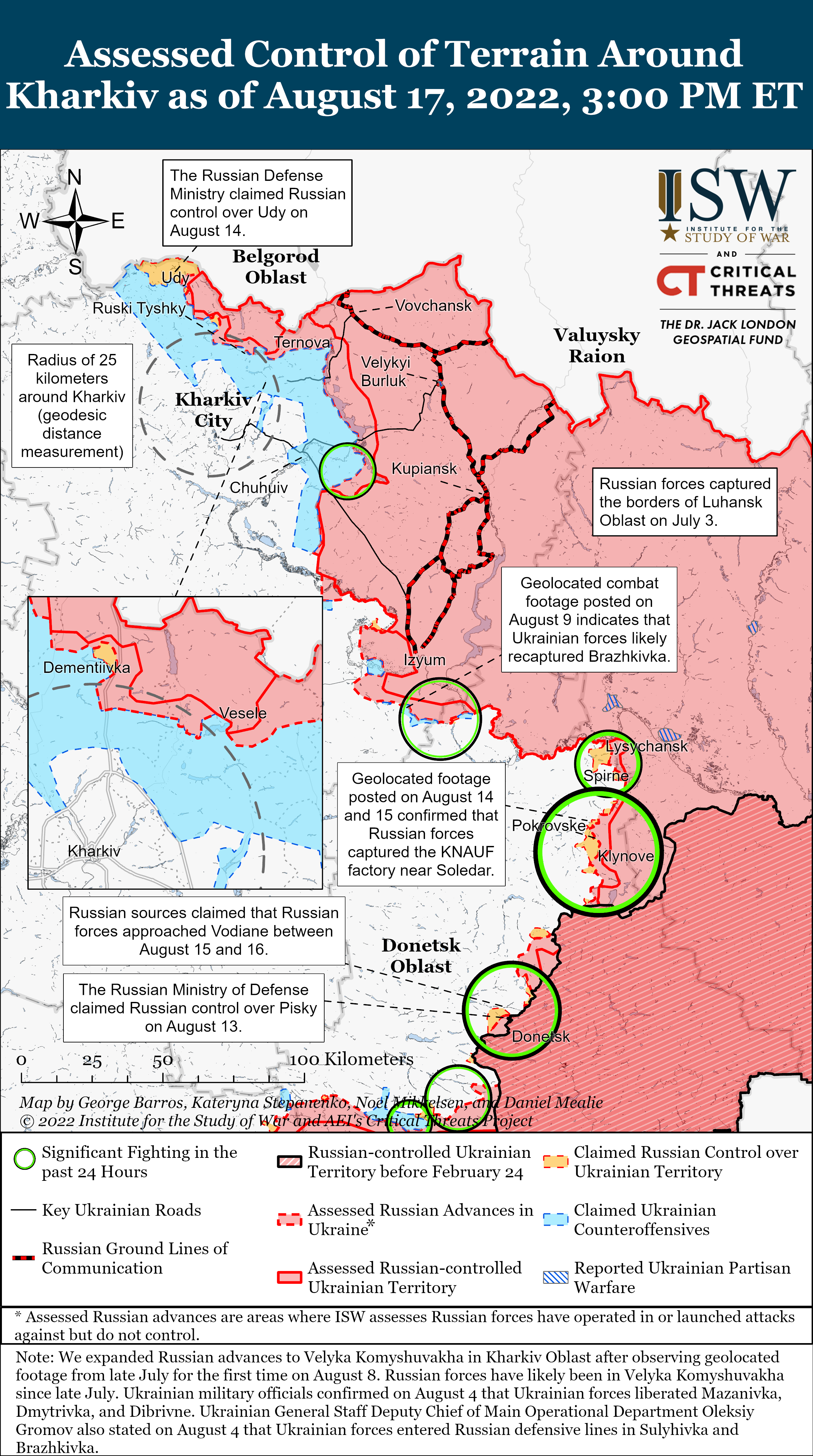 Russian forces are likely setting conditions to defend their ground lines of communication (GLOCs) between the Tokmak-Melitopol-Berdyansk area, prioritizing their positions in western Zaporizhia Oblast over those on the Zaporizhia-Donetsk Oblast border. The Ukrainian General Staff reported that Russian forces mined Inzhenerne and Ukrainske, both approximately 40km northeast of Tomak and on the T0815 highway to Polohy.[29] The T0815 supports Russian GLOCs from Polohy to Berdyansk and connects to the T0401 highway between Polohy-Tokmak-Melitopol. Russian mining in the northernmost occupied segment of the T0815 indicates that Russian forces are establishing defenses to protect vital GLOCs to Melitopol - a key logistics hub connecting Russian holdings in southern Donetsk, Zaporizhia, and Kherson Oblasts - and logistics routes along the Sea of Azov coastline. Russian forces need access to these routes to maintain operations in eastern Kherson Oblast and retain a direct road connection between Rostov-on-Don and occupied southern Ukrainian territories. Russian forces are unlikely to attack from the direction of Ukrainske and Inzhenerne in the near future given their reported mining of those villages. 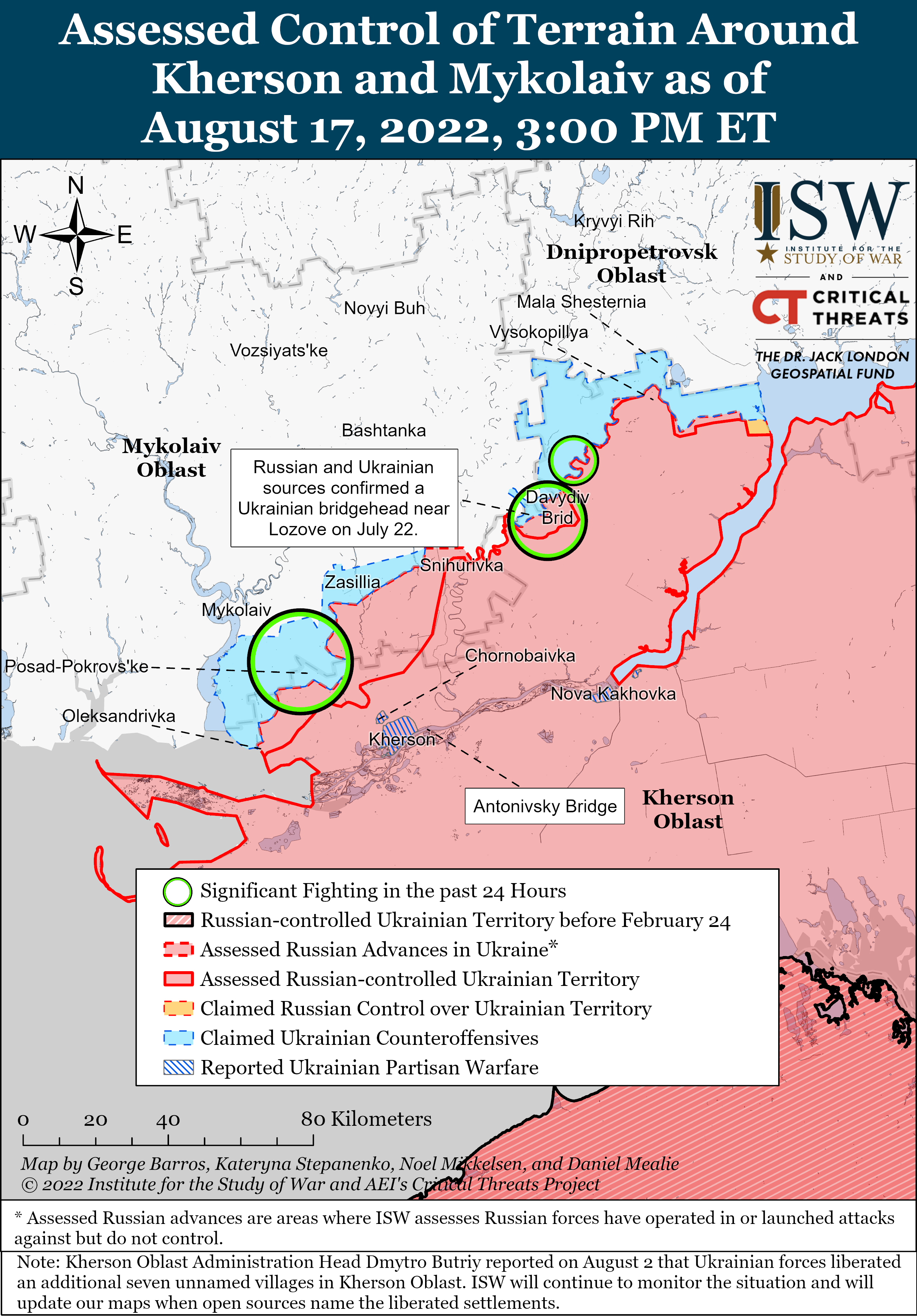 Russian forces continued to conduct small-scale assaults in northwestern Kherson Oblast on August 17. Ukrainian military officials reported that Russian forces unsuccessfully conducted a platoon-size assault and a reconnaissance-in-force operation near the Ukrainian bridgehead over the Inhulets River.[30] Russian forces continued to use aviation to strike Ukrainian positions northwest of Kherson City and near the bridgehead, and fired artillery at 27 unspecified settlements along the Kherson Oblast border with Mykolaiv and Dnipropetrovsk Oblasts.[31] Satellite imagery shows barge movement on the Dnipro River near Kherson City and locals reportedly stated that Russian forces are working on the barges at a Kherson City shipyard.[32] Russian forces may be attempting to repair and use barges to transport equipment across Dnipro River, although it is unclear whether the barges the Russians are using will be able to support transit of heavy equipment across the Dnipro River or whether Ukrainian forces can damage or destroy them once they are in actual use.

Ukrainian local officials reported that Russian forces fired tube artillery at Nikopol and 40 rockets from Grad MLRS at Chervonohryhorivka (northeast of Nikopol). Russian Telegram channels claimed that Ukrainian forces shelled near the Zaporizhzhia Nuclear Power Plant, but the available social media footage only recorded the sound of an explosion in an unspecified area reportedly near Enerhodar.[36]

Russian regional authorities and security services are continuing to face challenges in recruiting volunteers for Russian operations in Ukraine. The Kurgan Oblast Federal Security Service (FSB) lowered requirements for service in the local border guard department by allowing residents aged 18 to 34 and without higher education or military experience to seek employment.[39] The local FSB in Kurgan Oblast is recruiting personnel via the Russian social media platform VK and offering military pension payments as well as three-million-ruble mortgage program if recruits sign a military contract.[40] Pskov Oblast’s Rosgvardia branch is recruiting personnel of any education level or military experience for military service in Grozny, Chechnya.[41] Russian security services are likely posting misleading advertisements for employment opportunities to recruit more forces for the Russian war in Ukraine, a tactic ISW has previously reported on.[42]

Local government organizations in Russia are increasing advertisement campaigns to address quota shortages in military service contracts. Residents of Yaroslavl Oblast’s Dzerzhinskiy District received utility bills with military contract service ads at the top of their payment statements.[44] The local utility company noted that local officials ordered the company to include the message at the top on the bill to share the ”prospects” of contract service. Residents of a small village in Tyumen Oblast also shared recruitment posters at a local supermarket, which heavily bolded the offered enlistment payment and benefits.[45] Russian local authorities are likely attempting to distribute recruitment ads in places with high civilian traffic and are targeting financially vulnerable populations in rural villages.

Another Russian federal subject (region) claimed to have formed new volunteer units to deploy to Donbas, but such volunteer units are drawing criticism from some Russian milbloggers. The Republic of Mordovia claimed that it has formed three new volunteer units – Sivazhar, Aralai, and Kaval - and held a farewell ceremony for the deployment of its seventh detachment of 20 volunteers to Donbas.[46] It is unclear at the time of this publication if these volunteer groups are operating in Ukraine, if the units have a significant number of recruits, or if they are undergoing a one-month training period.[47] VK-based milblogger Vasily Petrovich described regionally formed volunteer units as the best way to ”get into a hospital bed or into the grave,” as these units do not have financial support outside of what is provided by their unnamed sponsors.[48] 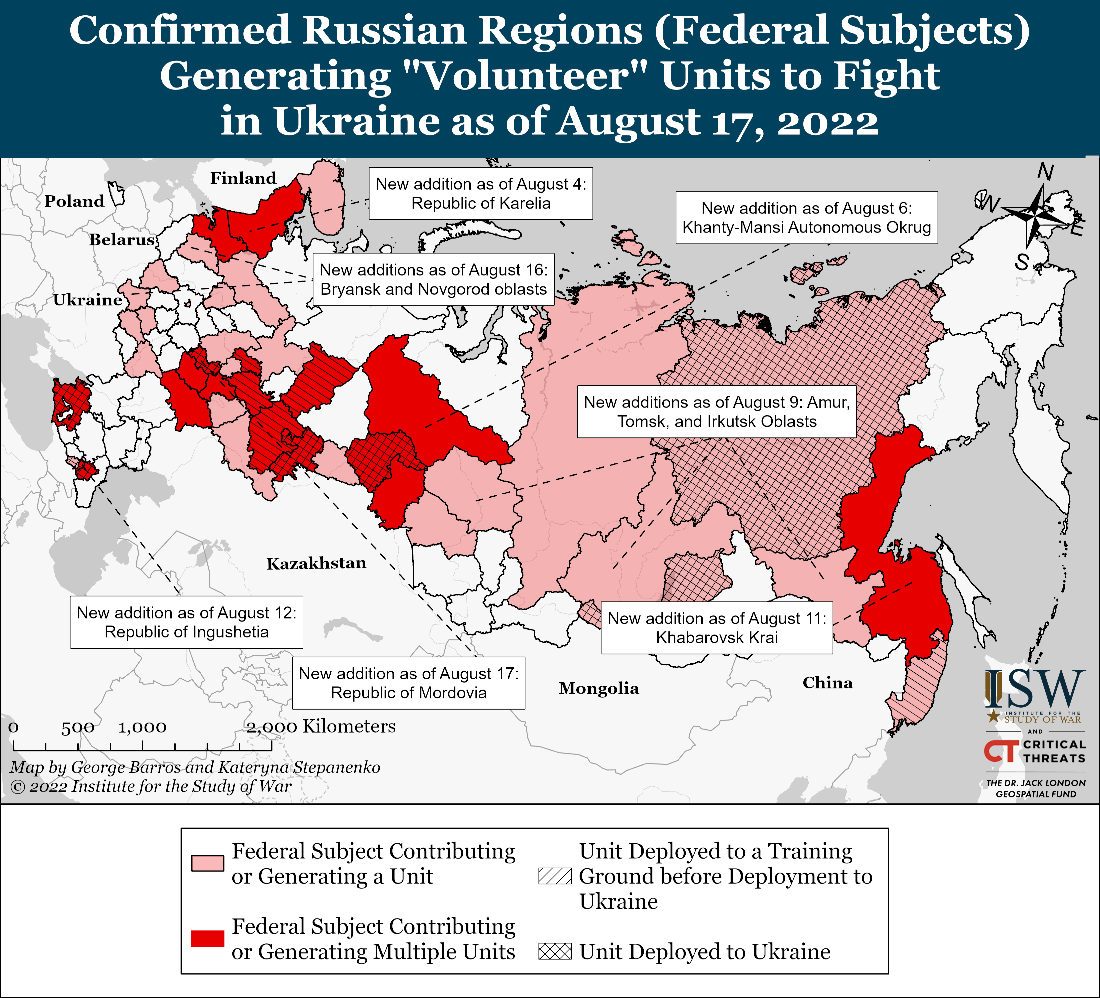 Russian forces are struggling to increase control of occupied territories amid fears of increased partisan activity. Several partisan attacks and reports of a Ukrainian counteroffensive have pushed occupation authorities to take more severe and highly visible measures to consolidate administrative control of occupied localities. Ukrainian officials in Kherson Oblast reported that Russian forces abducted Verkhnorohachytskyi District Head Svitlana Korotun on August 16 for refusing to collaborate with Russian occupation authorities.[52] This incident is part of a broader trend of Russian forces seeking to gain legitimacy by compelling collaboration from local authorities while “disappearing” those who refuse to comply. Occupation forces also seek to more closely monitor individual citizens. Advisor to the Mayor of Mariupol Petro Andryushchenko reported that Russian occupation authorities opened a second filtration point on the eastern side of Mariupol and gathered over 1,300 residents for inspection on August 17.[53] Enerhodar Mayor Dmytro Orlov warned that plain-clothed FSB officers stationed at public, Russian Wi-fi access points monitor private conversations and steal personal data, sometimes leading to the detention of Ukrainian citizens.[54]

Note: ISW does not receive any classified material from any source, uses only publicly available information, and draws extensively on Russian, Ukrainian, and Western reporting and social media as well as commercially available satellite imagery and other geospatial data as the basis for these reports.  References to all sources used are provided in the endnotes of each update.