Russian and Ukrainian sources reported explosions at an airfield and a critical Russian supply nexus in Crimea on August 16. Local reports and videos show a series of explosions at a Russian ammunition depot and a transformer substation in Dzhankoiskyi District and an airfield near Hvardiiske, Crimea.[i] These explosions both caused significant damage to Russian resources and seriously disrupted Russian logistics. Russian forces have used Dzhankoi as a railway hub for transporting troops and equipment to occupied settlements in southern Zaporizhia Oblast, including Melitopol.[ii] Russian authorities temporarily suspended passenger rail service from Russia into Crimea following the attack.[iii]

A Ukrainian strike on logistical targets in Crimea, which is the sovereign territory of Ukraine, would not violate Ukrainian commitments to Western partners regarding Ukraine’s use of Western-supplied weapons within Ukrainian territory or stated US policy regarding Ukraine’s right to use force to regain control of all its territory including areas seized by Russia in 2014.[vi] There are no indications that Ukrainian forces used US-supplied weapons in recent strikes on Crimea, and it is unlikely that they did, since the targets are well beyond the range of the US-provided systems.

Attacks on Russian positions in and around Crimea are likely part of a coherent Ukrainian counter-offensive to regain control of the west bank of the Dnipro River. Russian supply lines from Crimea directly support Russian forces in mainland Ukraine including those in western Kherson Oblast. Ukraine’s targeting of Russian ground lines of communication and logistic and support assets in Crimea is consistent with the Ukrainian counteroffensive effort that has also targeted bridges over the Dnipro River and Russian logistical support elements in occupied Kherson Oblast.[vii] The net effects of this campaign will likely be to disrupt the ability of Russian forces to sustain mechanized forces on the west bank of the Dnipro River and to defend them with air and artillery assets on the east bank from Ukrainian counterattacks.

The Kremlin continues efforts to misrepresent its likely maximalist goals in Ukraine. ISW assesses that Russian strategic objectives remain unchanged: changing the regime change in Kyiv and securing territorial control over most of Ukraine. Russian President Vladimir Putin omitted mention of territory outside of Donbas while describing the goals of Russia’s war in Ukraine on August 15. Putin closed his preliminary remarks to the Army-2022 forum on August 15 with the claim that Russian and Donbas forces are “doing their duty” to fight for Russia and “liberate” Donbas.[viii] Such a limited statement of Russian goals sharply contrasts with previously articulated Russian war goals to ”denazify” and ”demilitarize” all of Ukraine. Putin‘s relatively limited statement additionally is incompatible with Russian actions to integrate occupied parts of Kherson and Zaporizhia Oblasts into the Russian Federation. 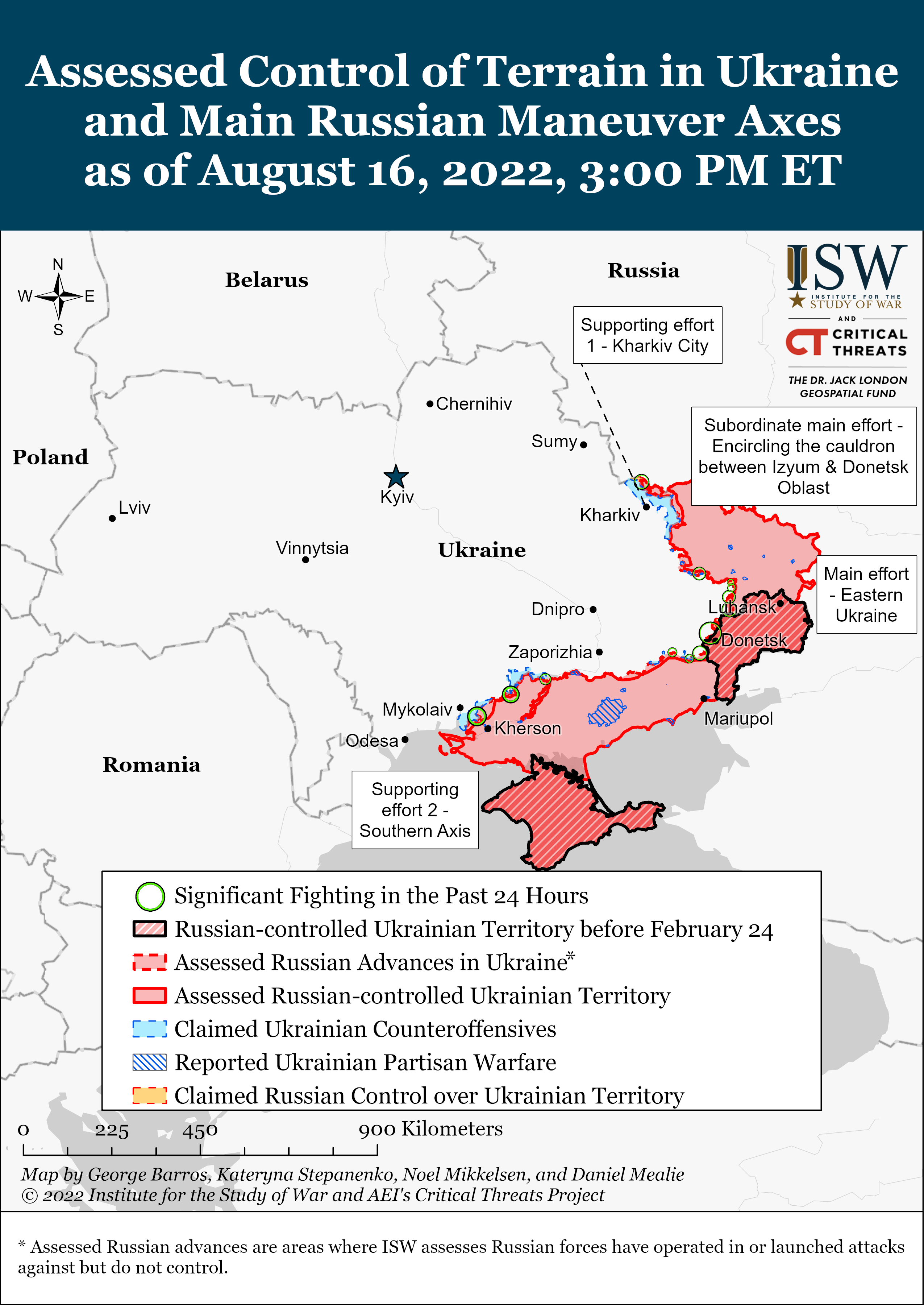 Russian forces attempted an assault near Siversk on August 16. The Ukrainian General Staff reported that Russian troops conducted an offensive operation in the direction of Ivano-Darivka (15km southeast of Siversk) from the Lysychansk Oil Refinery but retreated after suffering heavy losses.[xix] Luhansk Oblast Head Serhiy Haidai described the offensive as "massive."[xx] The Luhansk People’s Republic’s (LNR) Ambassador to Russia Rodion Miroshnik claimed that Russian-led forces surrounded Siversk on three sides but provided no evidence for this claim.[xxi] Miroshnik could hope that such a major claim will raise the morale of LNR soldiers reportedly unwilling to continue fighting in Donetsk Oblast.[xxii] Ukrainian forces reportedly conducted a precision strike and destroyed a Russian ammunition depot in Rodakove, Luhansk Oblast on August 15, but did not officially confirm the strike as of the time of this publication.[xxiii] Russian forces continued shelling along the line of contact.[xxiv] 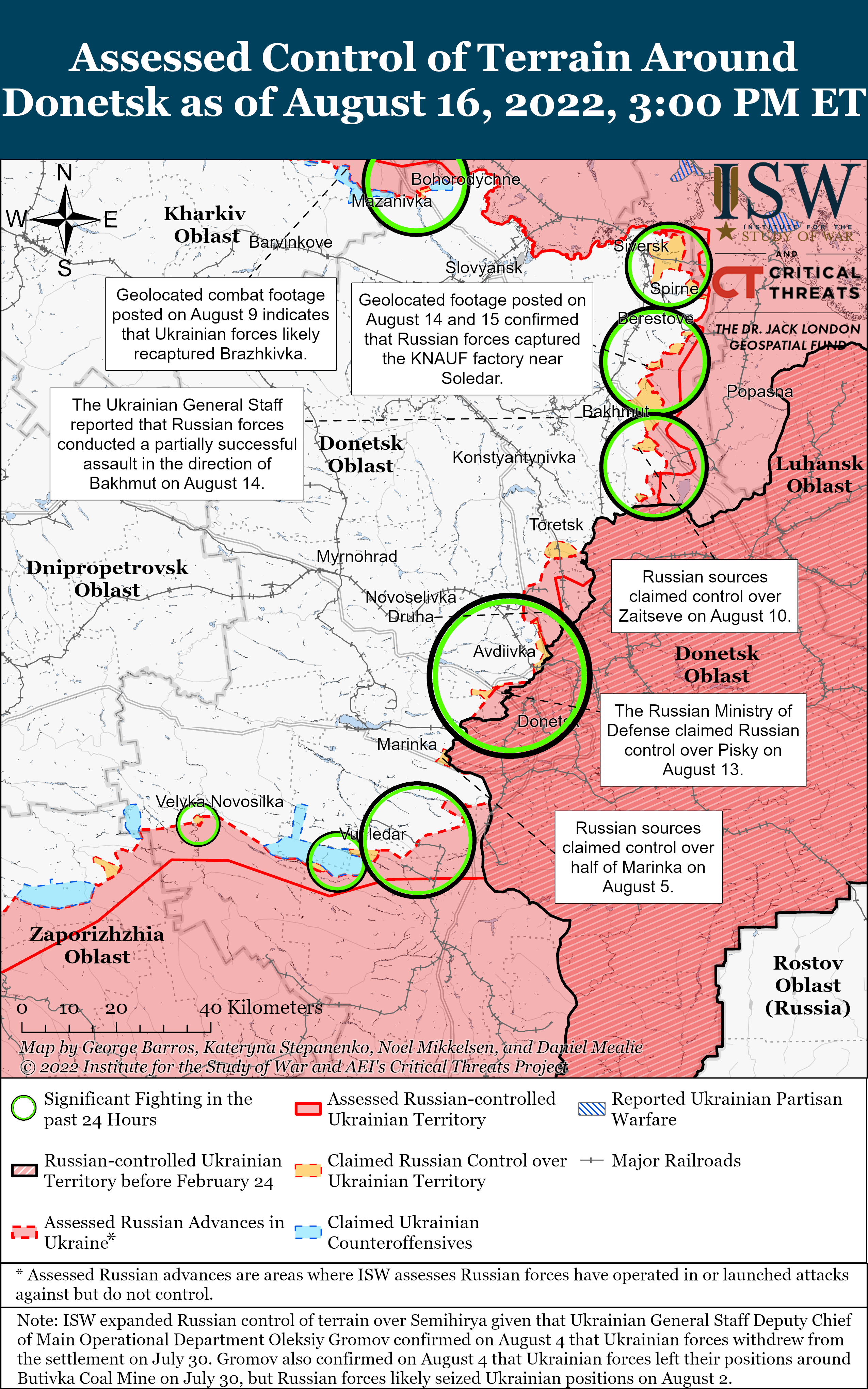 Russian forces did not conduct any confirmed attacks on the Kharkiv City axis on August 16 but continued heavy shelling. A Russian milblogger published a map expanding claimed Russian territorial control to Odnorobivka (8km from the Russian border, 45km northeast of Kharkiv City) but provided no evidence for this claim.[xxxv] Kharkiv Oblast officials reported Russian missile strikes on five of the nine Kharkiv City districts overnight between August 15 and 16.[xxxvi] Kharkiv Oblast Administration Head Oleg Synegubov referred to these strikes as one of the largest Russian shelling efforts against Kharkiv City recently.[xxxvii] Russian forces also conducted airstrikes on settlements northeast of Kharkiv City, dropped phosphorous munitions on Ruska Lozova, and continued to target settlements near Kharkiv City with missile, artillery, and tank fire.[xxxviii] 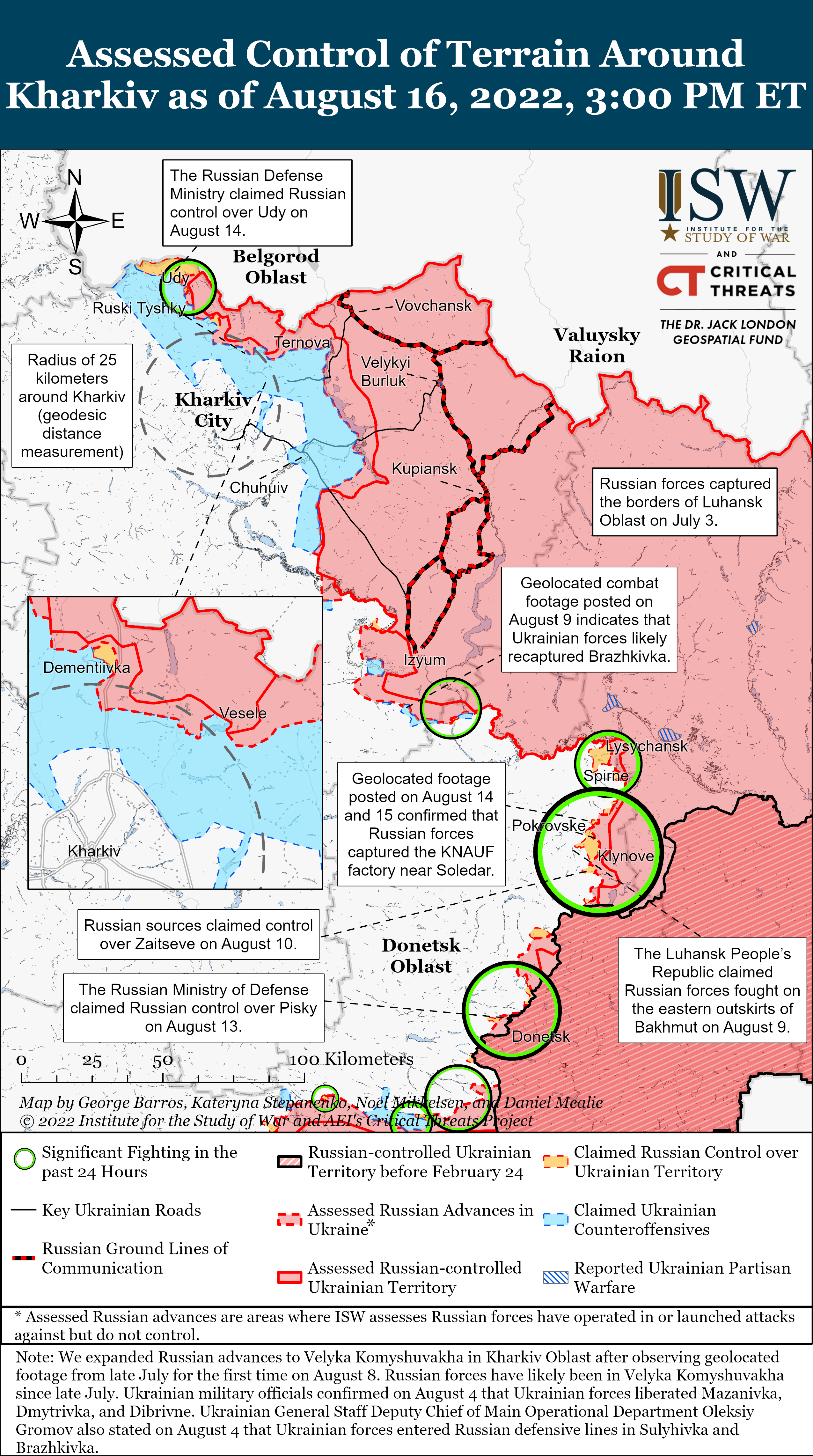 Russian forces conducted several unsuccessful offensive operations in northern and northwestern Kherson Oblast on August 15 and August 16. Ukrainian military officials reported that Russian forces attempted to advance to Novohryhorivka (approximately 36km northwest of Kherson City) but retreated after failing to improve their tactical positions in the area.[xxxix] Russian forces also unsuccessfully attempted to improve their tactical positions around Bilohirka (near the Ukrainian bridgehead over the Inhulets River) and conduct a reconnaissance-in-force operation in Osokorkivka near the Kherson-Dnipropetrovsk Oblast border.[xl] Russian forces also reportedly launched 14 airstrikes along the line of contact in Kherson Oblast, with most focusing on Ukrainian positions around the Inhulets River bridgehead and northwest of Kherson City.[xli] Russian forces continued firing rockets from Uragan and Smerch MLRS systems on settlements in Kryvyi Rih district and Mykolaiv City, respectively.[xlii]

Russian forces continued to fire on settlements situated on the right bank of Dnipro River from positions in occupied Zaporizhia Oblast. Ukrainian officials reported that Russian forces struck Nikopol with 40 Grad rockets and the neighboring settlement of Marhanets with fire from a Pion self-propelled heavy artillery system.[xliii] ISW previously reported on geolocated footage of a Russian Pion operating roughly 11km from the Zaporizhzhia Nuclear Power Plant (ZNPP).[xliv] The Russian Defense Ministry claimed that Ukrainian forces in Nikopol are preparing for large-scale provocations at the ZNPP but provided no evidence.[xlv] The Russian Defense Ministry could be setting information conditions for further shelling of Nikopol or a provocation of its own.

Ukrainian forces continued to target Russian ammunition depots and strongholds on the Southern Axis. The Ukrainian Southern Operational Command reported that Ukrainian aviation struck two Russian strongholds and a pair of ammunition and military equipment warehouses in Novopetrivka and Maksymivka, both 53km and 40km west of Mykolaiv City.[xlviii] Ukrainian missile and artillery units also destroyed a Russian supply point in Sukhyi Stavok, near the Ukrainian bridgehead in northwestern Kherson Oblast.[xlix] 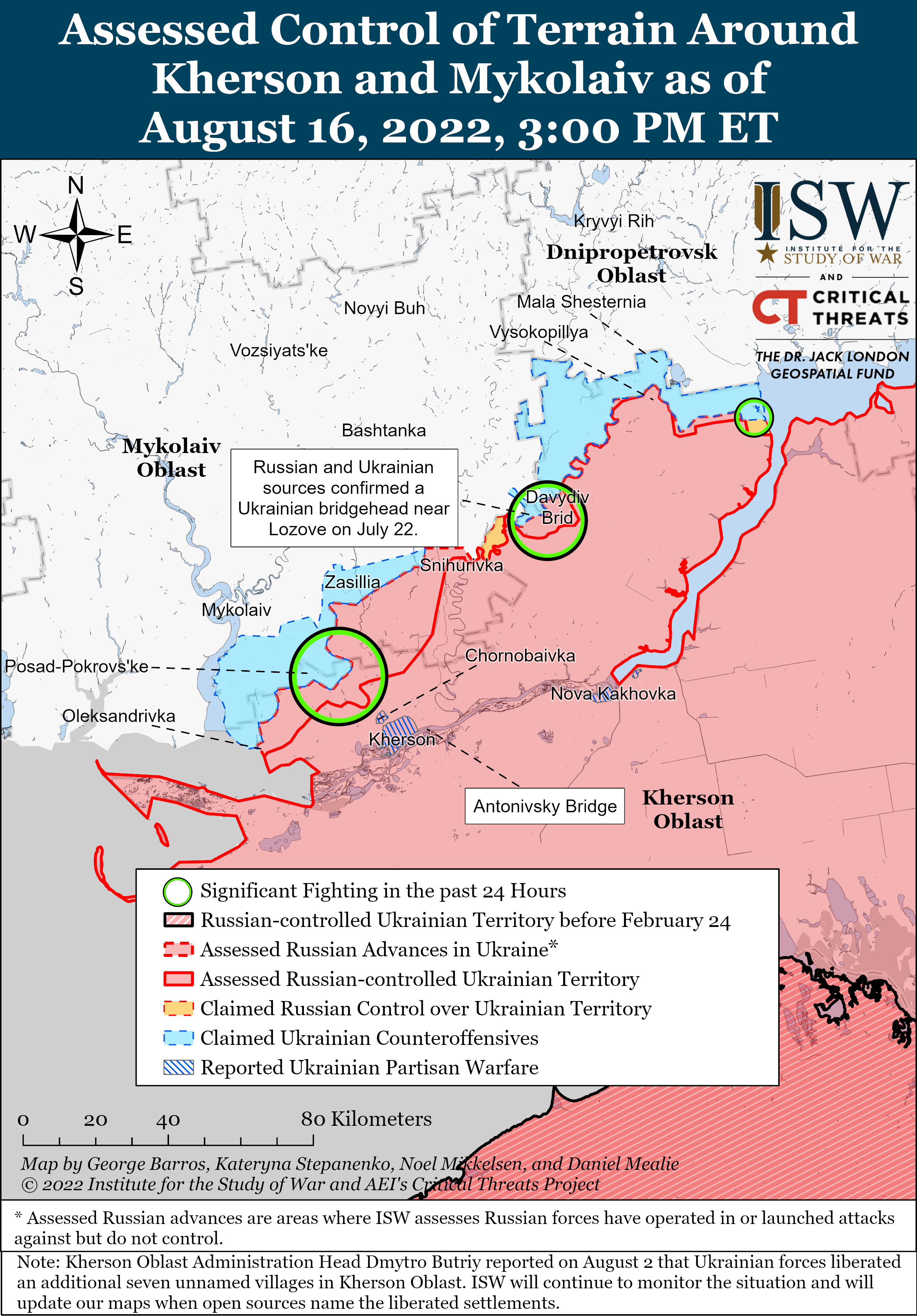 Russian forces continue to face recruitment challenges, likely even when recruiting reservists and volunteers for the most prestigious military units. Novgorod Oblast local outlets reported that Russian forces are recruiting residents with no prior military experience to serve on the submarine Veliky Novgorod.[l] Commander of the Veliky Novgorod Sergey Mikhailov stated that the submarine has eight vacancies (of a crew of 60) and asserted that recruits do not need to have prior special training or to have served in Russian forces ”at all.”[li] The ”Veliky Novgorod” submarine is currently supporting the Russian invasion in Ukraine operating in the Black Sea. This recruiting effort suggests that Russian forces are struggling to generate interest even for positions not directly on the frontline.[lii]

Novgorod Oblast officials also announced that recruitment has begun for a Novgorod Rocket Battalion that will form in Luga, Leningrad Oblast.[liii] Luga hosts a large artillery training ground and the base of the 9th Guards Artillery Brigade of the 6th Combined Arms Army. ISW has previously reported that St. Petersburg City and Vologda Oblast are also forming volunteer units in Luga.[liv] The officials are also offering a one-time enlistment payment of 250,000 rubles (about $4,000).[lv] Novgorod Oblast residents have previously reported receiving letters advertising contract service in Ukraine for men currently in the reserve in early March with the same daily combat pay of 8,000 rubles (about $53) and a monthly salary of 200,000 rubles ($3,250).[lvi] The March advertisement did not offer a one-time enlistment bonus.

Russian federal subjects (regions) continued to announce formation of new volunteer units but are unlikely to meet their quotas. Bryansk Oblast is forming a new unnamed volunteer unit of 350 servicemen that reportedly has enlisted 77 men so far.[lvii] Bryansk Oblast officials are offering a one-time enlistment payment of 210,000 rubles (about $3,400) split over three months. Bryansk Oblast officials specified that recruitment will last until December 31. Ukraine’s Strategic Communications Center reported that Nizhny Novgorod Oblast-based ”Kuzma Minin” Volunteer Tank Battalion only generated 30 recruits of the desired 160, which if true further suggests that Russian federal subjects are unable to create fully-staffed volunteer units.[lviii] Russian forces at the same time are less interested in recruiting women for combat, only offering some medical positions despite shortages in recruits.[lix] 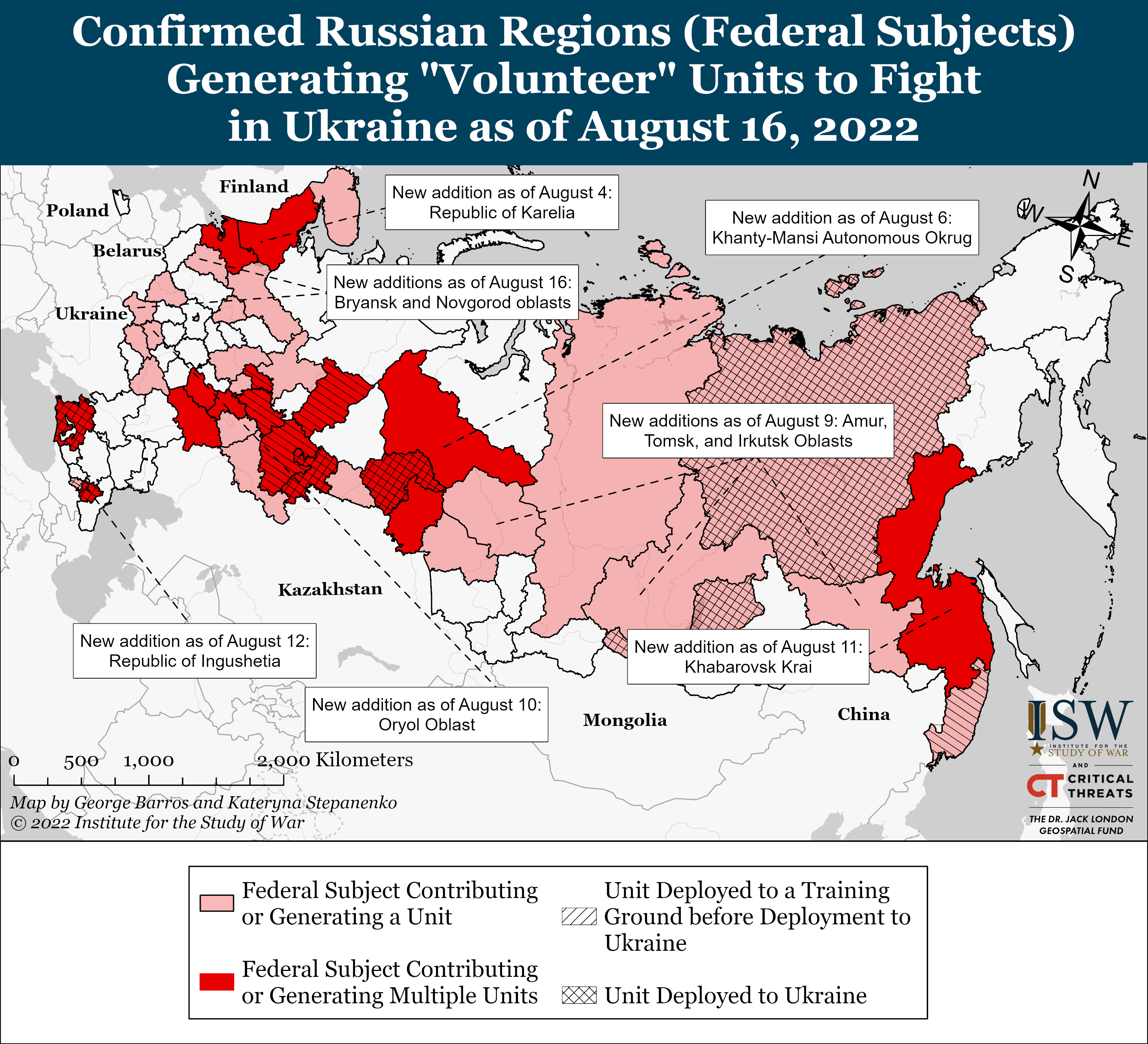