Some Iranian social media users are invoking the November 2019 gasoline protests as the ongoing, anti-regime protests enter the Persian calendar month of Aban (October 23-November 21, 2022). Some Persian-language accounts have described the ongoing protests as the continuation of the gasoline protests, which are often referred to as the Aban protests since they occurred primarily from November 15-19, 2019.[i] Estimates of civilians killed by the state security services in November 2019 range from 304 to 1,500.[ii]

Iranian security forces reportedly searched and beat several students attending the Sadr vocational high school in Tehran on October 24.[iii] The Education Ministry denied reports of violent clashes between security forces and students but acknowledged that school faculty searched and seized some students’ cellphones and that some students experienced blood pressure drops and required medical attention.[iv] The Education Ministry and the Law Enforcement Command (LEC) denied reports of student deaths.[v] The LEC blamed reports of unrest on clashes between ”thugs” in the vicinity of the Sadr high school.[vi] Anti-regime outlet Iran International reported a heavy security presence at the Loghman hospital in Tehran, where a Sadr student is reportedly being treated after she was hospitalized for her injuries.[vii]

CTP assesses with low confidence that protests occurred in the following location: 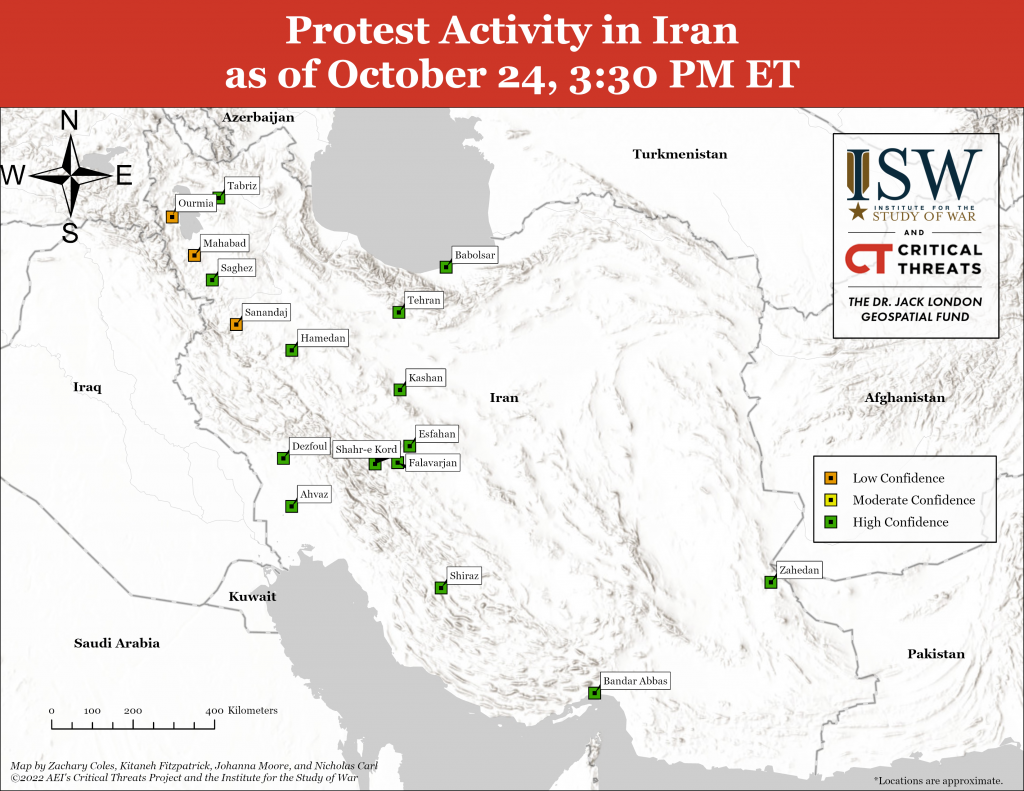 Iranian teachers continued to strike in solidarity with student protesters.[xxvi] Iranian teachers participated in strikes in at least nine cities in five provinces on October 24.[xxvii] The Education Ministry announced Ardabil Province school closures due to an “influenza outbreak.”[xxviii] Some schools in Ardabil Province may have closed due to teacher shortages amid the countrywide teacher strikes.