Anti-regime protests continued to subside in extent and scale on October 20 but may increase on October 22 and 26. CTP noted protest activity in five cities in five provinces on October 20—a notably low level of protest activity given the calls for protests on October 20 and protesters’ previous successes in coordinating countrywide demonstrations. Protest organizations had called for demonstrations specifically in Ardabil, East Azerbaijan, and Zanjan provinces.[1] Protest organizations have also called for protests throughout Iran on October 22 and 26—the latter being the 40th day since Mahsa Amini died.[2]

The regime may have used the forces it previously mobilized for a military exercise to deter and/or suppress protests in northern Iran. The Islamic Revolutionary Guards Corps (IRGC) Ground Forces conducted an exercise around the Iran-Azerbaijan border from October 17 to 20 in part to threaten Azerbaijan and also possibly to prepare to suppress nearby protests.[3] Iranian social media users reported severe internet disruptions in Tabriz on October 20.[4] The IRGC military exercises that occurred in the vicinity of Tabriz may have facilitated the regime’s ability to restrict protest organizers’ internet and telecommunication access and establish a security presence in the city. The main IRGC combat elements in the area are the 2nd Imam Zaman Mechanized Brigade and the 31st Ashoura Mechanized Division, which likely participated in the exercise.[5]

Anti-regime protests occurred in at least five cities in five provinces on October 20. Many instances of recent protest activity include fewer than 20 demonstrators and therefore do not meet CTP’s threshold for reporting. CTP assesses with moderate to high confidence that protests occurred in the following locations: 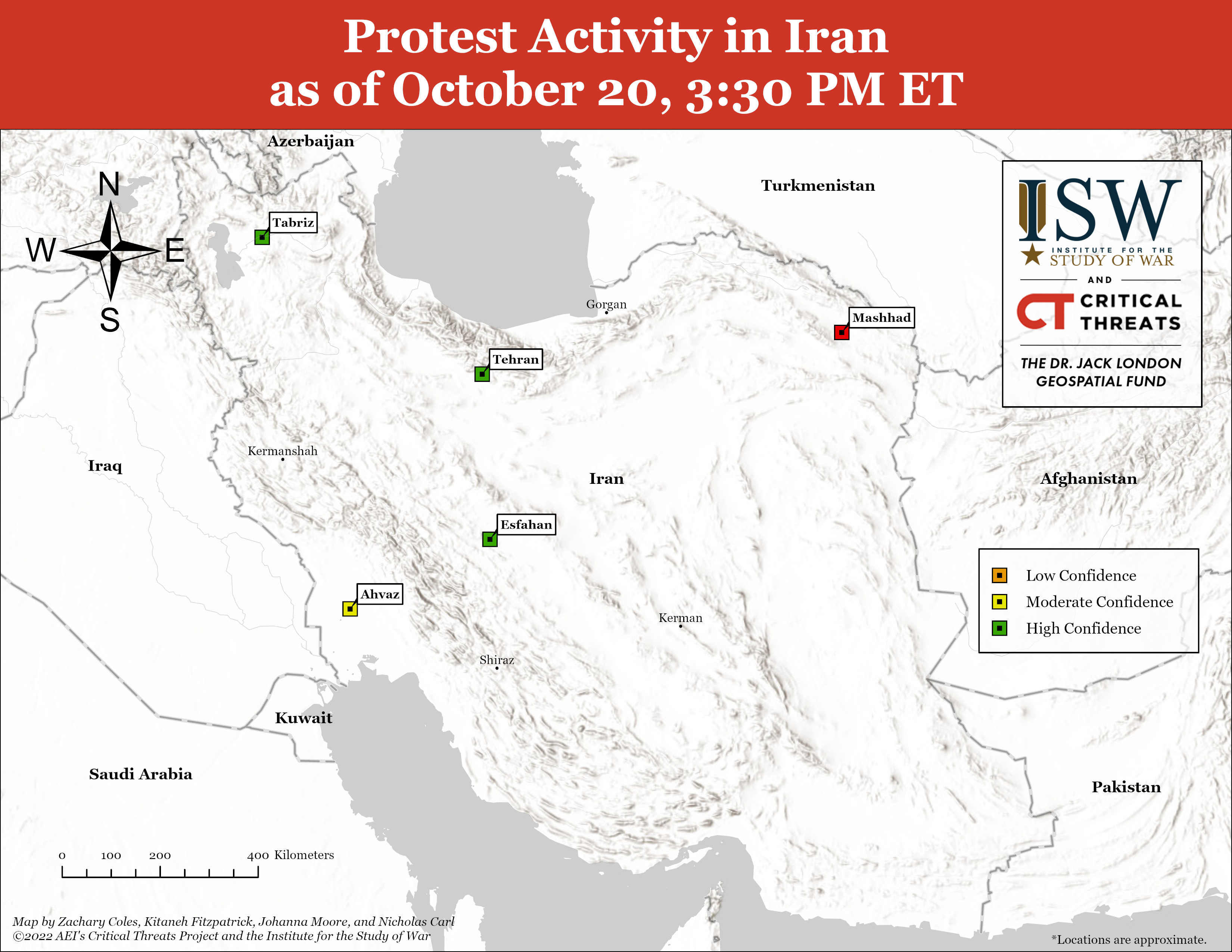 Salafi Jihadi militant group Jaish al Adl published a video expressing support for anti-regime protestors and threatening to conduct attacks in the Iranian homeland. Jaish al Adl criticized Iranian security forces for killing dozens of protestors in Zahedan, Sistan and Baluchistan Province on September 30 and announced that it would overthrow the regime. The video shows roughly 200 to 300 armed fighters standing in formations in an unknown location.[11] One formation of around 50 fighters wore all-white uniforms, resembling the uniforms of the suicide bombers of the Afghan Taliban. The US State Department designated Jaish al Adl as a terrorist organization in July 2019.[12]

A social media user purporting to be an Iranian protestor circulated footage threating to use a flame thrower on security personnel.[13] CTP cannot authenticate this footage.