The Islamic Revolutionary Guards Corps (IRGC) began a three-day military exercise along the Iran-Azerbaijan border on October 17 likely to threaten Azerbaijan for allegedly hosting Israeli intelligence agents.[i] The IRGC is using this exercise to demonstrate its capability to attack Azerbaijan and strike targets in Azerbaijani territory. The exercise includes artillery, helicopters, tanks, and missiles.[ii] The IRGC announced plans to practice bridging the river that divides Iran and Azerbaijan for the first time during this exercise.[iii] The IRGC is using the Fateh-360 short-range ballistic missile, which has a reported operational range of 120 kilometers, in this exercise.[iv] IRGC-affiliated media boasted that the IRGC has previously used these missiles for cross-border attacks into Iraqi Kurdistan.[v] An IRGC-affiliated journalist tweeted that the exercise signals the readiness of the IRGC to confront Azerbaijan.[vi]

Iranian officials and state media assert that Israel is using Azerbaijan as an intelligence base to instigate protests.[vii] IRGC Commander Major General Hossein Salami attended the exercise and accused Israel of operating in countries north of Iran, implying Azerbaijan.[viii]

Tensions between Iran and Azerbaijan have flared over Armenia in recent months, which also likely informed the regime decision to conduct the exercise. Iran opposes Azerbaijani efforts to connect Azerbaijan proper to the Nakhichivan Autonomous Republic by a land corridor, arguing that doing so would block Iranian economic access to European and Russian markets.[ix] The IRGC is likely conducting the exercise partly to signal its opposition to these Azerbaijani efforts.

Salami warned Saudi Arabia against using its media influence to stoke protests during the exercise.[x] Supreme Leader Ali Khamenei and senior Iranian political and security officials have repeatedly accused the US, Israel, and Saudi Arabia of stoking and coopting the protests to undermine the Islamic Republic.[xi] The IRGC Quds Force could use the Houthis or Iranian proxies in Iraq to conduct drone and missile attacks into Saudi Arabia in retaliation for Riyadh’s perceived role in fomenting the popular unrest.

The IRGC could redeploy the troops involved in the military exercise to violently suppress planned protests in northwestern Iran called for on October 20. Persian-language social media accounts have called for protests in the northwestern city of Tabriz and other nearby cities on October 20—the same day that the three-day military exercise ends.[xii] The main IRGC combat elements in the area are the 2nd Imam Zaman Mechanized Brigade and the 31st Ashoura Mechanized Division, which are likely participating in the exercise.[xiii] The IRGC would likely use these units to apply extreme force against protests.

NB: CTP has started to offer brief characterizations of major protest activities, including chants when audible and noteworthy, rough estimates of crowd size based on available videos, regime security force posture and activities, and other significant events. Actual crowd sizes may be larger, even considerably larger, depending on how much video evidence emerges and whether videos cover all protest activities in a given location or only some. 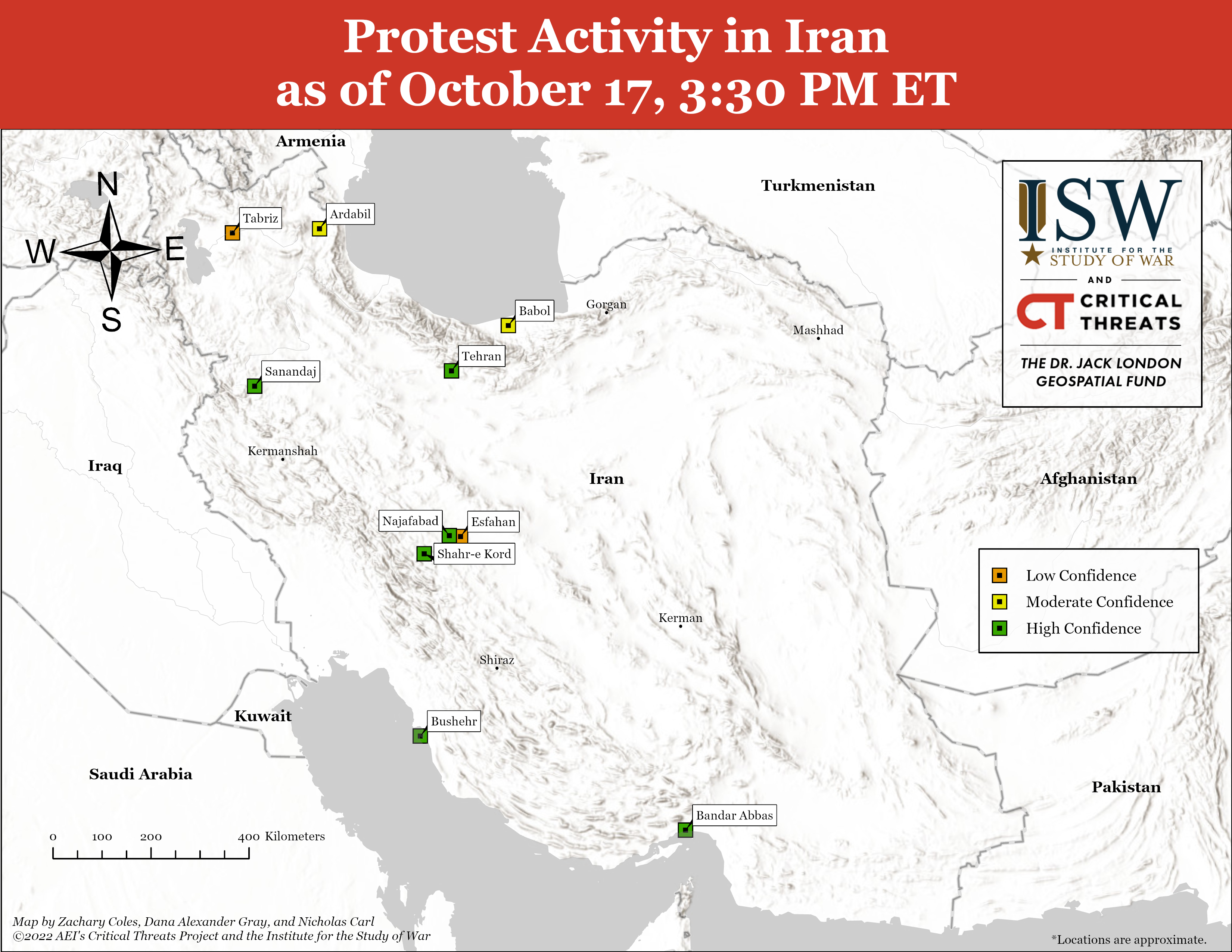 The New York Times reported on October 17 that the regime may have deployed special forces from the IRGC Ground Forces in recent days to suppress protests in Tehran and other major cities.[xxiv] These special forces units are often called Saberin forces. They are highly trained military personnel who specialize in airborne and heliborne assault, hostage rescue, sniping, and raiding.[xxv] The IRGC has previously used its Saberin units for combat operations in Syria.[xxvi] The use of the Saberin forces could indicate that regime security forces are either increasingly stretched, are preparing to use more extreme force against protesters, or both. The reporting on the deployment of Saberin personnel is consistent with CTP’s previous assessment that the IRGC Ground Forces has adopted a larger role in the crackdown.[xxvii]

Several reformist politicians proposed reforms to end the current crisis on October 17.[xxviii] Mohammad Ali Abtahi, Ahmad Mazani, and Rasoul Montajab Nia gave interviews with the Iranian Students News Agency, wherein they called for improving the legal framework for Iranians to express grievances. They claimed the regime does not uphold Iranians’ rights to peaceful protest and that Iranians want to reform the Islamic Republic but are driven to protest because they lack political channels to express criticism. Mazani called for the suspension of morality police patrols pending a parliamentary review of their conduct.[xxix]

The Jerusalem Post reported on October 16 that the IRGC is using members of Lebanese Hezbollah and Iraqi proxies to suppress protests in Iran, citing unidentified sources.[xxxii] The regime may be using these proxies to mitigate the security forces’ bandwidth constraints. Incorporating foreign militias into the internal security forces likely serves two primary functions: reinforcing the security apparatus with additional manpower and mitigating the risk of widespread dissent among the state security services.[xxxiii] Iranian leaders fear disloyalty and insubordination among security personnel asked to repress their fellow citizens. Foreign proxy fighters are less prone to insubordination because they lack the personal connections to Iran’s neighborhoods that the native IRGC and LEC members have. CTP cannot verify this reporting and has not seen protest videos of security forces with Levantine or Iraqi accents in Iran.