The Iranian regime failed to suppress demonstrations in Zahedan, Sistan and Baluchistan Province on January 6. Protesters participated in anti-regime demonstrations in Zahedan after prominent Sunni Cleric Moulana Abdol Hamid continued to criticize the regime in his weekly Friday prayer sermon. Abdol Hamid condemned Iranian leadership for extracting forced confessions from protesters and suggested that some Iranian officials were unlawfully behaving as though they possessed supreme religious authority. Abdol Hamid additionally maintained that demonstrations would continue in spite of mass arrests.[i]

Security forces reportedly increased their presence in Zahedan and carried out mass arrests in the days preceding Abdol Hamid’s January 6 sermon, as CTP previously reported.[ii] The regime’s increased security presence and arrest campaign – both of which likely intended to disrupt protest organization and intimidate participants – did not apparently impact protest activity, however. Protest turnout in Zahedan on January 6 largely resembled protest activity recorded on December 30.[iii] Abdol Hamid’s defiance and increasingly direct criticism of the regime is likely sustaining demonstrations in Zahedan, and the inability of security to prevent demonstrations from forming within mosques may be allowing protesters to organize more easily and readily in Sistan and Baluchistan than in other provinces. The regime could further escalate against protesters and Abdol Hamid in response, although taking direct action against Abdol Hamid risks inflaming the situation.

Confusing messaging from prominent protest organizations may risk further reducing protest activity. Several neighborhood youth groups circulated a poster commemorating the four-year anniversary of the Iranian-owned Sanchi oil tanker collision and tied the incident to the Mahsa Amini protest movement. The poster did not include calls for anti-regime demonstrations, as posters circulated by protester organizations typically do; it is unclear why protest groups circulated it.[iv] Protest coordinators have additionally issued discordant instructions on countrywide demonstrations and strikes on January 6-8, possibly signaling internal disagreements within the movement.[v] Inconsistent and misleading messaging from protest leaders may continue to degrade the movement’s effectiveness.

It is not immediately apparent how protest organizations and coordinators are seeking to reinvigorate anti-regime demonstrations or to what they attribute decreased protest activity. CTP has recorded a sustained depression in anti-regime demonstrations since December 2022, although we have yet to record a day without at least one protest that meets our reporting threshold. Social media users have circulated detailed safety instructions ahead of protests scheduled for January 8, which could suggest the groups assess that fear or intimidation is preventing greater participation in demonstrations. Neighborhood youth groups and other prominent organizations would likely need to assuage such concerns by sharing their assessments on why protest activity has decreased and through establishing a robust, internal infrastructure that would guarantee protesters’ financial and physical safety, if safety concerns are, in fact, the primary driver of lower turnout. It is not obvious that they are, however, as protesters have continued to demonstrate in many parts of the country even after brutal suppression, regime killing of protesters, and mass arrests.[vi] Protest movements can also fade as would-be protesters conclude that they must turn their attention back to their ordinary lives and livelihoods, especially in the kinds of difficult economic circumstances that reportedly are taking hold in Iran. Protest organizers in such circumstances can be challenged to find ways of identifying and providing necessary economic support to would-be demonstrators. 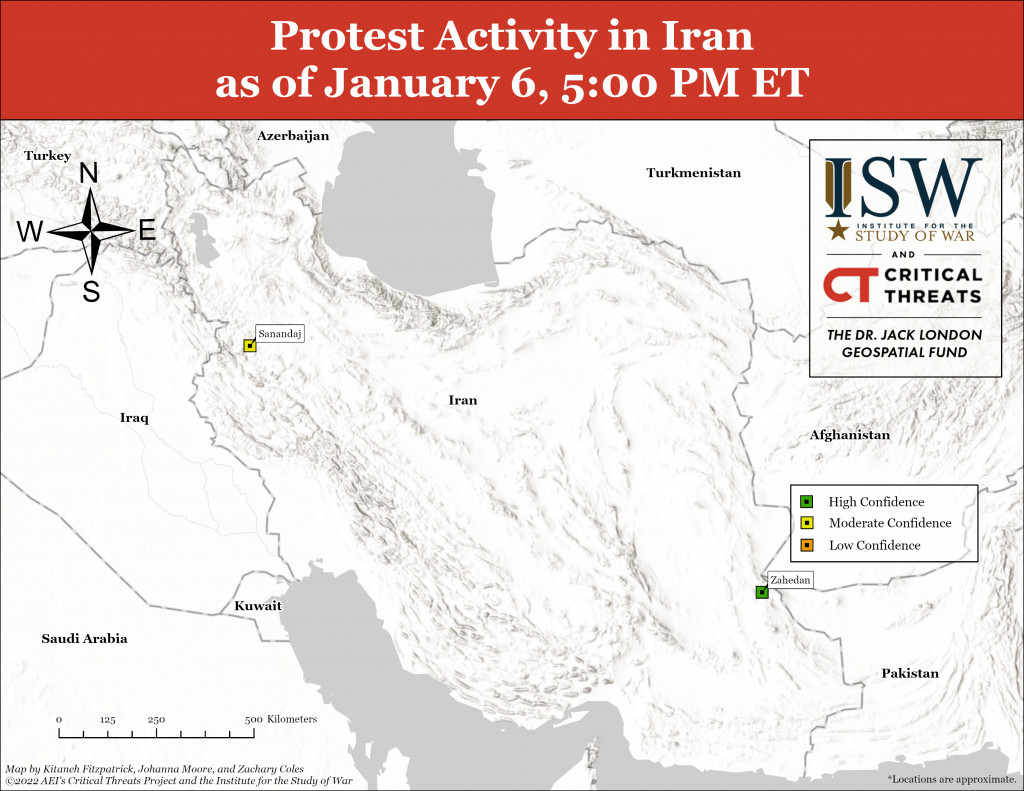 Several Friday Prayer Leaders stressed the importance of enforcing mandatory veiling laws on January 6. Iranian Friday Prayer Leaders receive their talking points directly from Supreme Leader Ali Khamenei’s office and their rhetoric can often be reflective of Khamenei’s intended messaging. The Ahvaz, Karaj, Qom, and interim Tehran Friday Prayer leaders stated that the Islamic Republic and its citizens have a collective obligation to chastise unveiled women but added that this obligation should not lead to physical confrontations.[xi] Friday Prayer Leaders’ messaging suggests that the regime may no longer seek to penalize women who fail to adhere fully to the regime’s hijab standards so as long as they are veiled. Such rhetorical shifts should not be viewed as concessions, however. Regime officials have discussed employing an expansive collective-punishment model to penalize unveiled women in recent days, as CTP previously reported.[xii]

Mashhad Friday Prayer Leader Hojjat ol Eslam Ahmad Alamolhoda primarily discussed the Iranian economy in his weekly sermon, a notable rhetorical divergence from other Friday prayer sermons on January 6. Alamolhoda is the father-in-law of President Ebrahim Raisi and although he does not officially speak for Raisi, it is reasonable to infer that Alamolhoda‘s comments may occasionally reflect Raisi‘s position. Alamolhoda claimed that “currency fluctuations are not so important” and blamed economic conditions on Iran’s enemies on January 6.[xiii] Alamolhoda separately argued that the regime could not definitively enforce mandatory veiling on January 4.[xiv]  Alamolhoda’s January 4 warnings that the regime cannot effectively enforce veiling could cohere with Raisi’s position, particularly if Raisi fears that he would be held responsible for such efforts by angry Iranian citizens.

The US Department of Treasury’s Office of Foreign Assets Control (OFAC) sanctioned seven individuals associated with Iranian drone and ballistic missile sales to Russia on January 6.[xv] OFAC sanctioned six executives and board members of the Qods Aviation Industries (QAI) and the director of Iran’s Aerospace Industries Organization (AIO). QAI primarily produces Mohajer-6 drones which have been used by Russian forces in Ukraine. AIO Director Nader Khoon Siavash was sanctioned for his participation in the production and sale of Iranian ballistic missiles to foreign buyers. Iran and Russia have continued to pursue closer and mutually beneficial security cooperation in recent months.

There was nothing significant to report.