Regime officials and entities are endorsing an expansive, collective-punishment model to implement mandatory veiling laws as anti-regime demonstrations enter their fourth consecutive month. Interior Minister Ahmad Vahidi stressed the importance of the hijab on January 5. Vahidi confirmed reports that the regime began issuing texts warning unveiled women drivers to adhere to hijab laws and described veiling as a “legal issue” and core component of the Islamic Republic’s religious values.[1] The judiciary has additionally submitted for review a draft bill that would replace Article 638 of the Islamic Penal Code, which outlines the consequences for failing to adhere to the state-imposed hijab law,  within the past several days.

The judiciary’s proposed bill would expand the degree to which the regime can penalize unveiled women and introduces new punishments for repeat offenders, including "social deprivations” that would deny women basic social services and the right to leave the country, and mandatory religious courses. The bill would additionally penalize third-party actors like business owners and supervisors for failing to enforce veiling online or in-person. The bill fails to define the standards to which women must adhere, which would allow the regime to arbitrarily police and prosecute Iranian women. Article 638 currently states that women who do not adhere to state-approved veiling practices are subject to imprisonment and fines. Iranian media suggested that offenders would continue to be subjected to imprisonment and fines under the judiciary’s proposed bill, although this remains unclear. The bill did not mention the morality police, who brutally killed Mahsa Amini for “improper hijab” on September 16.[2]

The regime is hardening its stance on hijab rather than offering any meaningful concessions.  The Islamic Republic is doubling down on its commitment to impose harsh sentences including prison, fines, and something that sounds much like reeducation on women for failing to meet its standards of dress.  The vagueness of the standard to which it is legally holding Iranian women is not a concession, as it reserves to unspecified regime officials the right to decide arbitrarily on a case-by-case basis whether a woman has met the regime’s legal requirements.

The Iranian regime is likely escalating against Prominent Sunni Cleric Moulana Abdol Hamid in an attempt to quell ongoing demonstrations throughout Sistan and Baluchistan Province. A website that reports on Sistan and Baluchistan Province reported an increased security presence in Zahedan, Sistan and Baluchistan Province ahead of Abdol Hamid’s January 6 weekly Friday prayer sermon.[3] Security personnel additionally detained at least 113 Zahedan residents, including children, in a mass arrest campaign likely aimed at intimidating anti-regime protesters throughout the city within the past several days.[4] Protesters often gather to demonstrate against the regime after--and possibly during--Abdol Hamid’s Friday sermons, and regime officials have previously accused Abdol Hamid of inciting unrest.[5]Abodol Hamid has reportedly refused recent demands from regime officials to cease criticizing the regime in his sermons.[6]

The regime likely is attempting suppress protests in Zahedan while avoiding another wave of mass violence similar to what occurred on “Bloody Friday” on September 30, 2022. Security forces opened fire on protesters, many of whom had emerged from Friday prayers sermons, killing scores of civilians.[7] Security forces may partially have struggled to disrupt ongoing protests in Zahedan because they originate within mosques, inhibiting the regime’s ability to disperse the crowds and quell unrest. Security forces may be escalating against Abdol Hamid through intimidation tactics such threats and arrests in hopes of preemptively reducing protest turnout.

At least three protests occurred in three cities across three provinces on January 5. Social media users documented snow and rain throughout Iran on December 5, which may have depressed protest activity on this date.[8] Weather conditions may interfere with coordinated calls for protests and strikes on December 6, 7, and 8. CTP assesses with moderate to high confidence that protests occurred in the following locations: 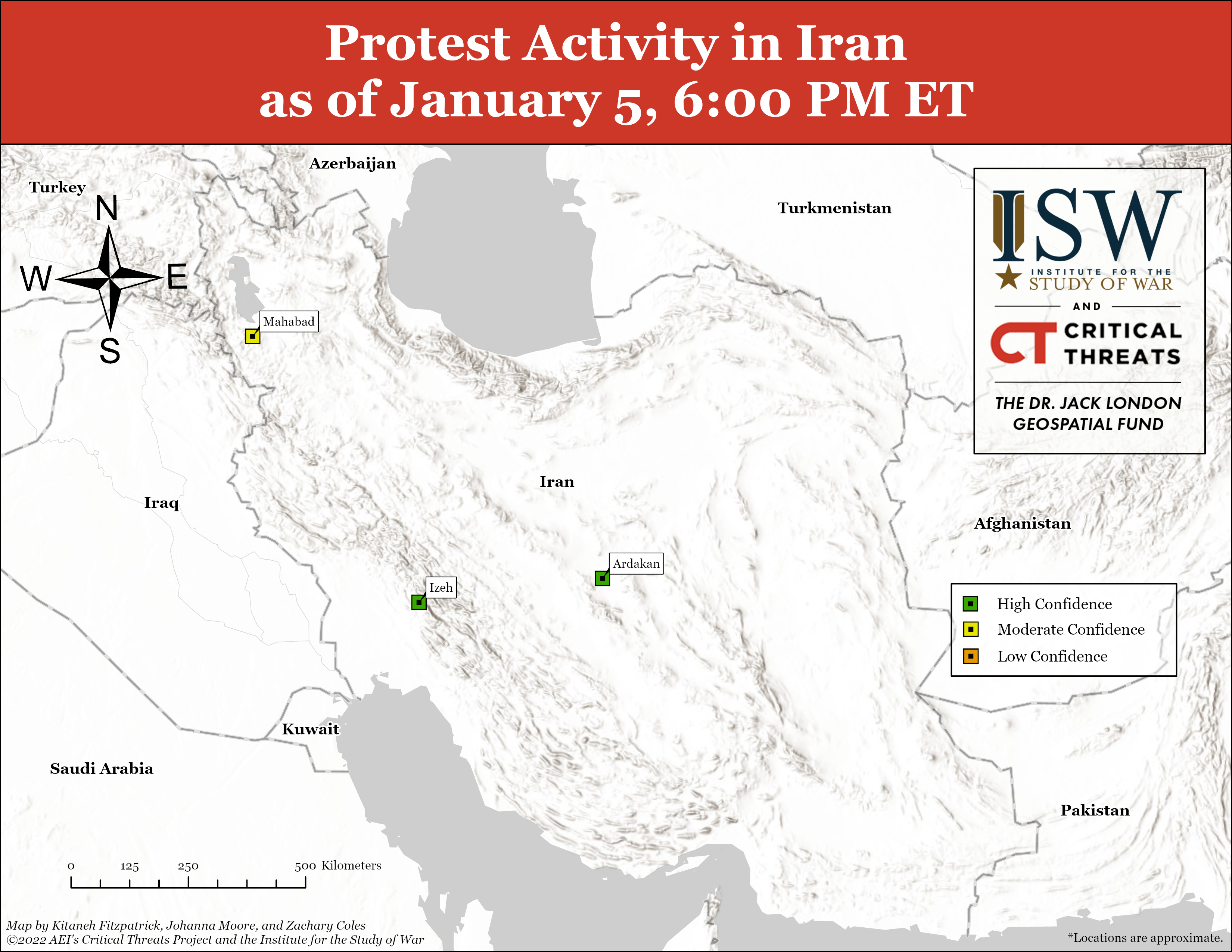 WhatsApp established a feature that allows Iranians to partially circumvent regime-imposed internet restrictions. WhatsApp announced that users can indirectly access the social media platform through a proxy server set up by volunteers on January 5.[14] The Iranian regime has implemented ongoing internet and telecommunication restrictions, particularly on Western social media applications like WhatsApp and Instagram, since September 2022 in an attempt to impede anti-regime protester coordination and organization.[15]

An Iranian court sentenced a detained protester to death on December 5 for purportedly leading anti-regime demonstration efforts in Mazandaran Province. The court accused 18-year-old Arshia Takdastan of damaging public property and providing material to foreign-based Persian diaspora media outlets.  Takdastan was convicted of “corruption on earth” and “waging war against god,” both of which are crimes punishable by death.[16]

Anti-regime outlet Iran International claimed that the IRGC sanctioned the January 3 death of IRGC officer and Tehran Basij Commander Ghasem Fathollahi. Iran International alleged that an IRGC Intelligence Organization-affiliated actor assassinated Fathollahi in his home after intelligence officials concluded that Fathollahi was communicating with protesters, citing an inside source.[17] Regime officials previously reported Fathollahi died in a burglary on his home that was unrelated to ongoing protests.[18] Some social media users have speculated that Iran International’s narrative is an information  operation by the regime aimed at obfuscating the possibility that anti-regime protesters killed Fathollahi.[19] CTP cannot independently verify either of these claims.

Several Iranian officials gave public addresses threatening Israel on January 5. Foreign Affairs Minister Hossein Amir Abdollahian claimed that Israel will face “severe consequences” for “desecrating” the al-Aqsa mosque compound in Jerusalem in a phone call with the Islamic Cooperation Organization Secretary General Hossein Brahim Tahah.[20] Defense Ministry Political and Ideological Organization Head Hojjat ol Eslam Ziaddin Aghajan Pour similarly warned Israel that it would “raze Tel Aviv and Haifa to the ground” if it made a mistake and boasted that Iran possessed missiles that could target “the heart of Israel.”[21] IRGC Deputy Commander for Operations Abbas Nilforoushan additionally threatened Israeli Prime Minister Benjamin Netanyahu in a public address.[22] Regime officials’ warnings may be in response to reports that Netanyahu aims to adopt a tough stance on Iran, although such threats are not unusual and occur frequently.[23]

Social media users circulated unverified reports that unidentified assailants shot and killed an Iranian judge in a northern Tehran neighborhood on January 5.[24] CTP cannot corroborate the veracity of this report and such accounts should be treated with skepticism.

Iraq’s Supreme Judicial Council may weaponize investigations into Soleimani’s death to target pro-Western entities in Iraq. Head of the Supreme Judicial Council of Iraq Faiq Zaidan announced that Iraq’s judiciary will pursue legal action against Iraqi and foreign individuals accused of assisting in the assassination of former IRGC Quds Force Commander Qassem Soleimani.[25] Pro-Iranian political actors may use the low investigative threshold to retaliate against pro-US officials from the Kadhimi Administration.