Protester umbrella organizations appear to disagree on the timing of the upcoming planned protests. Protest coordinators from the Iranian Neighborhood Youth Union have called for countrywide demonstrations and strikes on January 6-8 to commemorate the three-year anniversary of the Islamic Revolutionary Guards Corps (IRGC) shooting down of a Ukrainian civilian airplane.[i] Other protest groups, such as those allegedly aligned with the Iranian Neighborhood United Front, have called for demonstrations only on January 8 (the Iranian Neighborhood United Front published a statement that it claimed its members signed, but not all members have confirmed their alignment with this umbrella organization thus far).[ii] This divergence suggests that the emergence of different umbrella organizations vying for the allegiance of local groups may have created a fault line within the protest movement. Such disunity could indicate that different protest leaders are competing for influence within the movement, as CTP previously argued.[iii]

This division may be one of the factors depressing protester turnout. CTP has recorded a sustained reduction in protest activity since December 2022.[iv] We have yet to record a day without at least one protest, but the inconsistent messaging is likely generating confusion and stoking mistrust among demonstrators. Protest leaders failing to resolve dissonant calls and messages may continue to degrade the movement’s effectiveness.

The graphic below illustrates the distribution of the protest groups that have reportedly expressed alignment with one or multiple umbrella organizations. Two protest groups—the Iranian Neighborhood Tigers and the Countrywide Youth—are not illustrated on this map because they are not clearly affiliated with a single geographic location. Both have reportedly expressed alignment with the Iranian Neighborhood United Front. 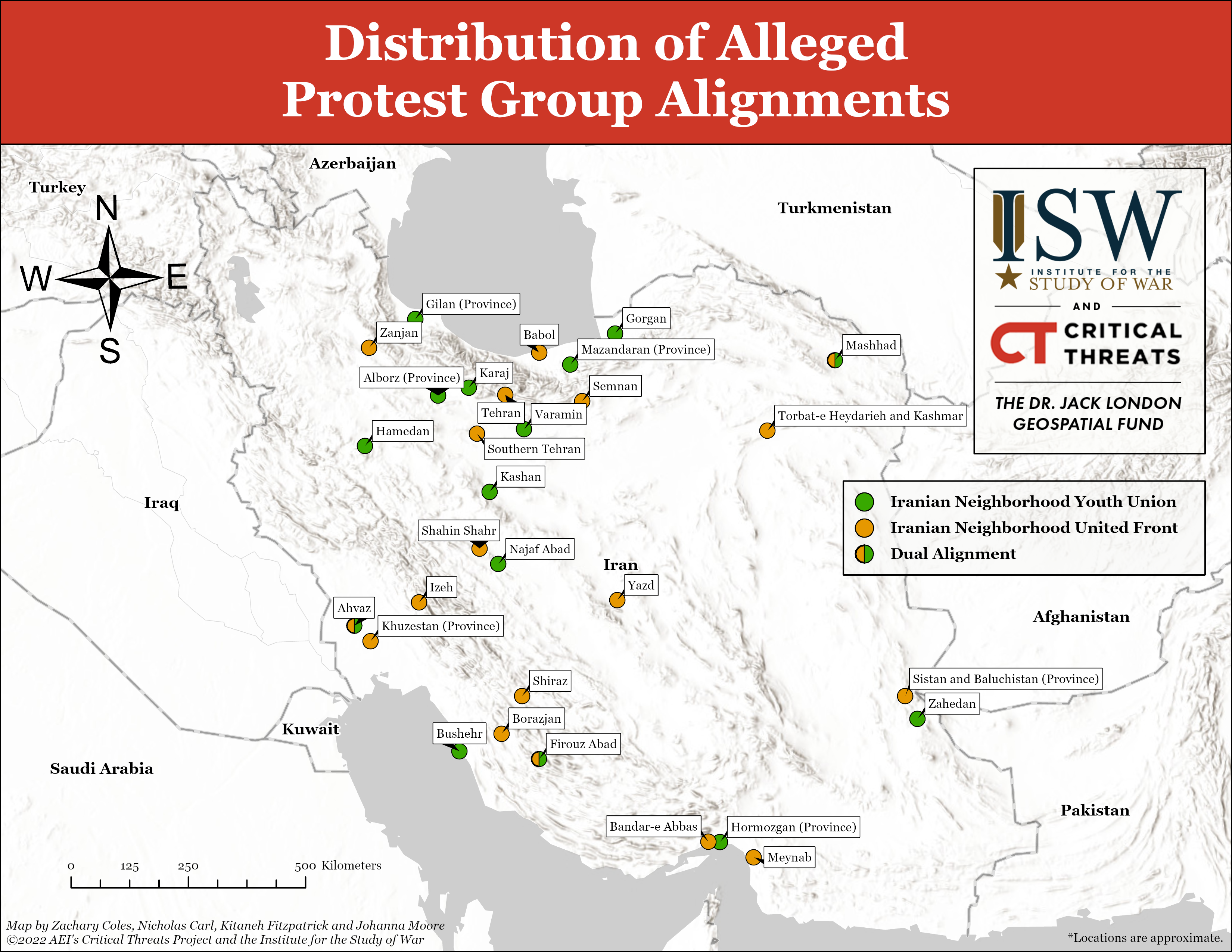 The regime continues to adopt more overtly authoritarian language and policies. Senior Iranian officials have discussed implementing a countrywide internet shutdown for several hours on January 19-20 to prevent cheating on a scheduled university entrance exam. An education official, Hassan Morovati, announced these plans on January 4.[v] Science, Research, and Technology Minister Mohammad Ali Zolfi Gol denied Morovati’s claim that there will be a countrywide shutdown and asserted that the regime will only cut internet in the locations where the test is administered.[vi] Information and Communications Technology Minister Isah Zareh Pour separately stated that the State Security Council is reviewing the motion to block the internet and has not yet made a decision.[vii] This inconsistent and mixed messaging suggests that the Raisi administration has not yet reached a consensus on the potential internet shutdown. But regime officials openly discussing such extreme measures to prevent cheating on a standardized test reflects how the regime is normalizing such oppressive behavior. The regime could be considering the potential internet shutdown to expand censorship and suppress dissent rather than prevent cheating.

At least one protest occurred in one city across one province on January 4. CTP assesses with low confidence that protests occurred in the following locations: 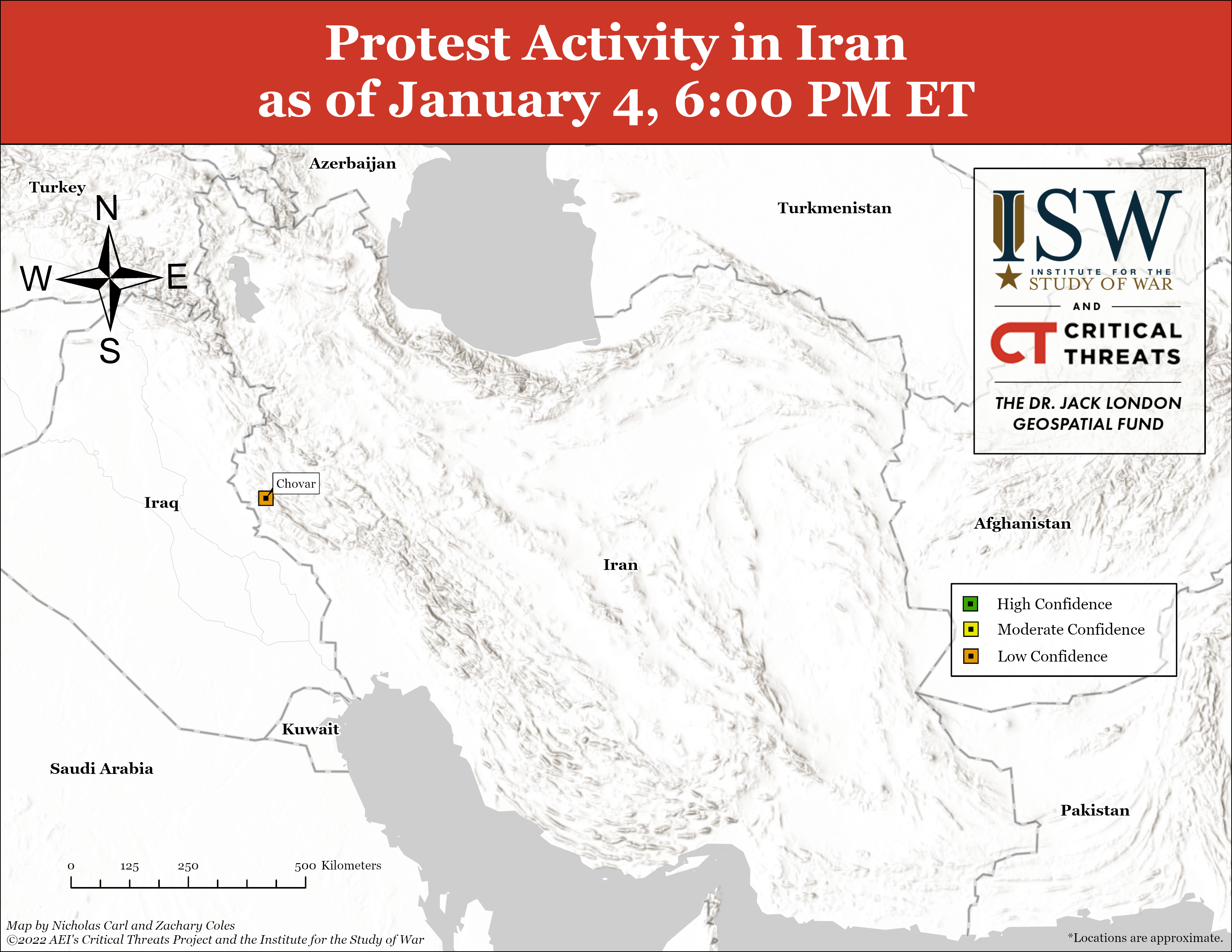 Iranian media reported on January 3 that Supreme Leader Ali Khamenei has dismissed Brigadier General Hossein Ashtari as law enforcement commander.[xi] These reports should be treated as unverified rumors until the office of the supreme leader confirms them. If true, the removal of Ashtari likely indicates Khamenei’s dissatisfaction with the performance of the Law Enforcement Command (LEC) in suppressing the protests. The removal of Ashtari would be particularly noteworthy given Khamenei’s apparent trust in him historically. Khamenei has shuffled and replaced many senior officers responsible for internal security after previous major protest waves in Iran.[xii] But Khamenei has kept Ashtari in his position since appointing him in 2015—even after the 2017-18 Dey protests and 2019 Aban protests.

Iranian media suggested that Khamenei may appoint Brigadier General Ahmad Reza Radan to replace Ashtari.[xiii] Radan was the law enforcement deputy commander from 2008 to 2014 and has directed the LEC Strategic Studies Center since then. The Iranian armed forces occasionally send senior officers to military and security think tanks to devise new operational concepts and plans before assigning those officers to senior command positions to implement those ideas.[xiv] Radan could introduce new concepts and doctrine to the LEC based on his experience at the LEC Strategic Studies Center if he replaces Ashtari.

Supreme Leader Ali Khamenei reiterated the mandatory hijab requirement during a meeting with female leaders on January 4.[xv] Khamenei described the hijab law as an irrevocable, religious necessity and emphasized support for women fully veiling. He added, however, that one should not label women who only partially wear the hijab as counterrevolutionary or irreligious. Khamenei is essentially announcing that the regime should continue to enforce the hijab law but tolerate women who only veil partially. Khamenei expressed a similar idea during his first major speech on the protests on October 3, stating that some of the regime’s strongest female supporters do not wear the full hijab in public.[xvi]

Former President Mahmoud Ahmadinejad released a video statement on January 4 criticizing the regime protest crackdown.[xvii] Ahmadinejad stated that the regime should allocate its resources toward improving domestic conditions rather than suppressing protests. These remarks are the first from Ahmadinejad that CTP has recorded since protests began in September 2022.

Likely Iranian proxies launched two rockets at US forces stationed at the Conoco International Coalition base in eastern Syria on January 4. US CENTCOM issued a statement confirming that the attack did not cause any casualties or damage to equipment.[xviii] Syrian Democratic Forces personnel discovered a third, unlaunched rocket where the attack originated. Iranian proxies last attempted to attack US forces in eastern Syria on November 17, 2022.[xix] The January 4 attack marks the only instance of Iranian-backed militants targeting US forces in the days surrounding the third anniversary of the US killing Qassem Soleimani. Iranian-backed militants contrastingly conducted multiple attacks against US forces in Iraq and Syria over several days surrounding the 2022 anniversary.[xx]