Key Takeaway: The Islamic State’s West Africa Province (ISWA) is most likely not responsible for the June 5 massacre of at least 40 churchgoers in southwestern Nigeria. The Owo church attack underscores the complexity and ambiguity of Nigeria’s deteriorating security situation, in which an array of armed actors, including Salafi-jihadis, are increasingly active.

At least four gunmen massacred Catholic churchgoers in Owo, a town in southwestern Nigeria’s Ondo State, on June 5. The attackers detonated improvised explosive devices (IEDs) at the church entrance before opening fire on the congregation, killing at least *40 people. Ondo State frequently experiences violence, including farmer-herder* killings* relating to land disputes and bandit robberies,* but the Owo attack stands out for its high casualty count. No armed group has claimed responsibility for the attack.

The Nigerian Security Council attributed* the Owo attack to the ISWA on June 9. It is possible, but not likely, that ISWA is responsible. ISWA has increased its operations outside northeastern Nigeria in 2022, though the northeast remains its primary area of operations. As part of this increase, ISWA conducted bombings in May in the southern Kogi State, just over 50 miles northeast of Owo, but those were not as coordinated or deadly as the Owo attack. In fact, ISWA has never conducted an attack of this magnitude outside of northeastern Nigeria. The Owo attack would mark an inflection in both scale and geographical reach if ISWA is responsible. The Owo attack would also mark an escalation in ISWA’s campaign targeting Christians. ISWA has targeted Christians outside of northeastern Nigeria with IEDs in bars* and other public places. Escalating attacks targeting Christians would align with broader Islamic State objectives. Other Islamic State affiliates in Mozambique and the Democratic Republic of the Congo have also targeted Christians in recent attacks and statements.[1] 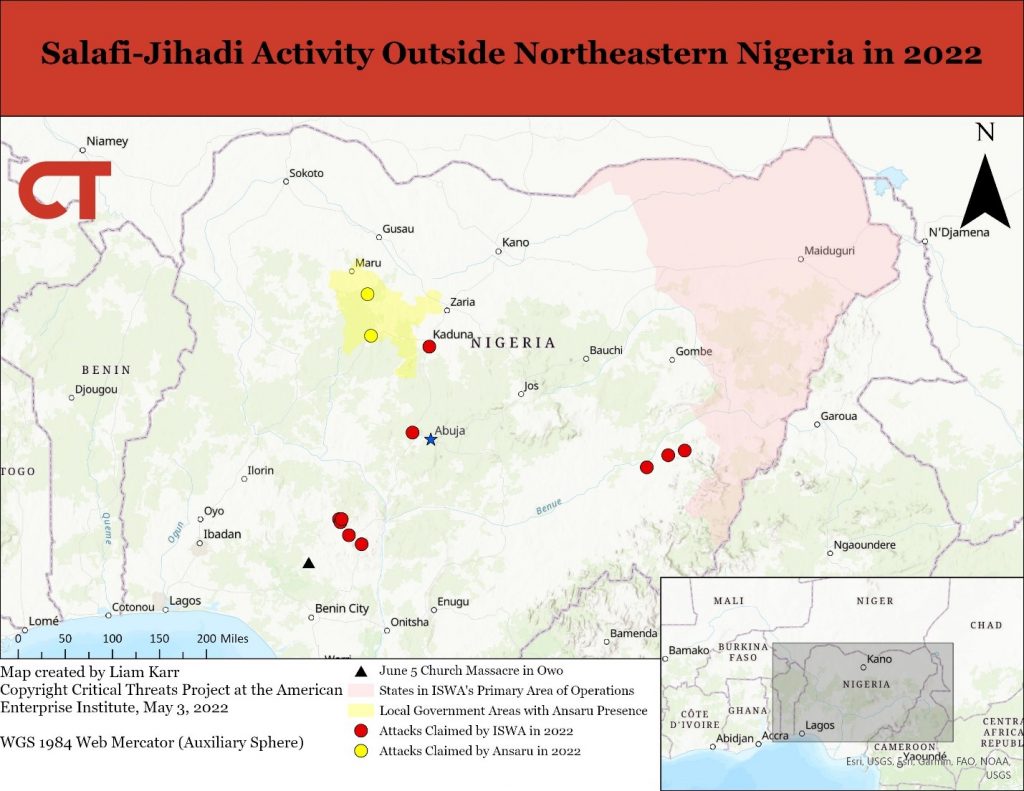 The lack of ISWA media about the Owo attack indicates that ISWA is likely not responsible. ISWA has issued no claim for the Owo massacre. The lack of a claim breaks with ISWA’s usual pattern. The group claimed two bombings in south-central Nigeria within two days in May and June, for example. Neither ISWA nor other Islamic State media have commented on the Owo massacre, despite its scale and its alignment with other attacks and rhetoric targeting Christians. ISWA did wait several months to claim some attacks in early 2022, but this rare occurrence was meant to sync the claims with a global Islamic State media campaign, and none of the delayed claims were for attacks as high-profile as the Owo massacre.[2]

The proliferation of armed conflict across Nigeria means several other groups could be responsible for the Owo attack. Bandit groups entrenched in the northwest are spreading into other areas of Nigeria, kidnapping, extorting, and killing civilians. Predominantly Fulani Muslim herders are increasingly clashing with non-Fulani Christian farmers over land use, an issue that climate change will further exacerbate. Militants from the ethnic-based secessionist group Indigenous People of Biafra are attacking government forces and civilians in a low-level insurgency* concentrated in the southeast. These various actors* are* active in Ondo or neighboring states and have attacked* churches* in the past. Uncertainty over responsibility for the Owo attack reflects the broader deterioration of security across large parts of Nigeria.

Salafi-jihadi groups are not the primary drivers of this destabilization but are participating in it and adapting to new trends. ISWA has increased its activity outside of northeastern Nigeria in 2022, claiming attacks in Taraba, Niger, Kaduna, and Kogi States. This shift in operations may indicate that ISWA is attempting to expand the battlefield in response to military pressure* in its primary areas of operations in northeastern Nigeria, as it attempted to do in 2015-2016. Al Qaeda–linked Ansaru has also strengthened in 2022. It began to exercise control of terrain in June after several years of embedding itself into northwestern Nigerian communities by offering them protection from bandit groups.

Expanding Salafi-jihadi activity compounds the security challenges that the beleaguered Nigerian government faces before the February 2023 elections. Violence could affect* voter registration and participation in the 2023 elections, further undermining the Nigerian government’s popular legitimacy. Quick fixes such as disrupting ISWA cells* will not substitute for long-term solutions to growing societal problems.