Key Takeaway: Al Qaeda and Islamic State affiliates are conducting attack and messaging campaigns against Indian politicians and religious groups in response to a party spokesperson’s controversial comments about Islam. An IS affiliate in Afghanistan already conducted a retaliatory attack. Al Qaeda and IS may pursue additional attacks against Indian interests in Afghanistan, the contested region of Jammu and Kashmir, and Pakistan. An attack in India is unlikely but would be potentially destabilizing under current political conditions.

Al Qaeda and Islamic State affiliates are attempting to incite attacks against Indian politicians and religious groups. A spokesperson for India’s ruling Bharatiya Janata Party (BJP) made controversial remarks about the Prophet Muhammad and Islam on May 27, and Salafi-jihadi groups have threatened to attack India and Indian interests in response. Al Qaeda in the Arabian Peninsula (AQAP), al Qaeda in the Indian Subcontinent (AQIS), al Qaeda’s Somali affiliate al Shabaab, and the Islamic State Khorasan Province (ISKP) threatened attacks in June and July 2022. ISKP is so far the only group to make good on its threat by *attacking a Sikh temple in Kabul, eastern Afghanistan, on June 18 and killing a worshipper and security guard. Suspected IS-linked militants killed a Hindu shopkeeper in Udaipur, western India, on June 28, but IS has not claimed the attack.

Al Qaeda affiliates’ rhetorical responses to the BJP remarks continue a trend of escalating anti-India messaging. Al Qaeda has ramped up its India-focused propaganda since late 2021, releasing three consecutive videos in October and November 2021 urging Indian Muslims to take up arms against the state. AQAP in Yemen and al Shabaab in Somalia threatened Indian interests in June, continuing a trend of al Qaeda affiliates projecting unity through global messaging campaigns. An AQAP-aligned media unit released a chant on June 8 inciting violence against Hindus in revenge for the BJP’s statements.[1] Al Shabaab attempted to provoke attacks against Hindus on June 19, saying the BJP’s comments represent a “war” against Muslims in India.[2] Al Shabaab, more than AQAP, could move beyond messaging to target Indian interests. The group could seek to target Indian diplomatic or economic targets in Kenya, where al Shabaab has historically operated an attack network. 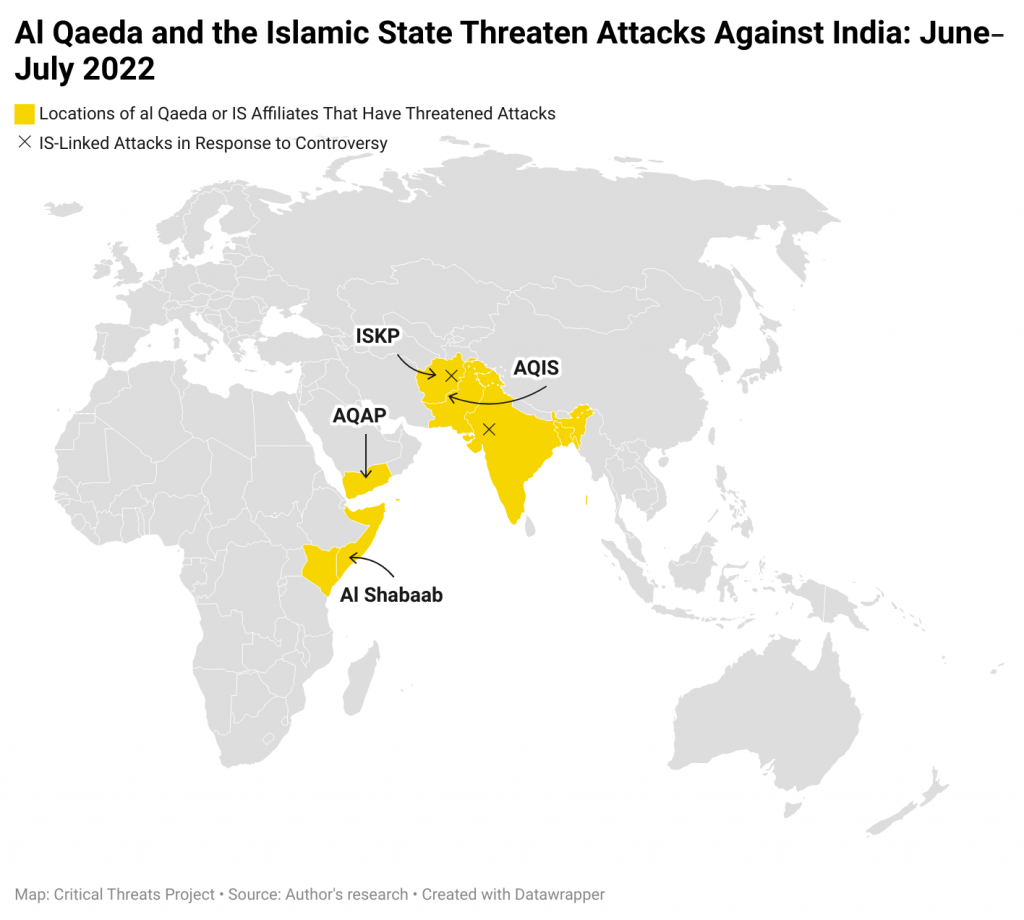 India has faced a low terror threat in recent years, but new risks are emerging. Al Qaeda associates have carried out major attacks in India in the past—most notably the large 2008 bombings in Mumbai perpetrated by Pakistan-based Lashkar-e-Taiba—but India has generally encountered much less Salafi-jihadi activity than neighboring countries in South Asia. Changing conditions may now raise the threat level to India, however. The Taliban takeover of Afghanistan has created an opportunity for IS—a Taliban rival—to expand and may have also created more opportunities for al Qaeda—a Taliban partner—to resume operating there. Salafi-jihadi groups also have a greater motivation to attack in response to the BJP’s comments. Ongoing competition between al Qaeda and IS for recruits in South Asia incentivizes the groups to carry out attacks to demonstrate legitimacy and tactical prowess. Rising Hindu-Muslim tensions in India also risk creating a more favorable environment for Salafi-jihadi recruitment.

AQIS may attempt an attack in India but has limited capabilities and no significant record of success there. Al Qaeda established AQIS in September 2014 to organize various jihadist factions under a single banner and compete with IS for leadership of the global Salafi-jihadi movement. AQIS has its largest base in Afghanistan but also operates in Bangladesh, India, and Pakistan. It has claimed responsibility for numerous militant attacks since 2014, including the attempted seizure of a Pakistan navy frigate in Karachi, Pakistan, on September 6, 2014.

AQIS threatened on June 7 to attack BJP members with suicide bombings in Delhi, Gujarat, Mumbai, and Uttar Pradesh, which are in western and northern India.[3] AQIS has never conducted a major attack in India and, as of 2021, was comprised mostly of Afghan and Pakistani nationals. Joint US-Afghan counterterrorism operations since 2015 have weakened the group. AQIS has not claimed an attack since April 2016, when militants killed two gay rights activists in Dhaka, Bangladesh. There are some indicators that AQIS may be attempting to strengthen its network in India, however. AQIS’s English and Urdu online propaganda has repeatedly targeted Indian Muslims for recruitment. Indian security forces *disrupted plans by al Qaeda–linked militants to conduct suicide bombings in India as recently as July 2021.

Islamic State affiliates in India and Pakistan have not previously conducted a major attack in India and will likely continue to prioritize attacks in the areas where they operate, including Jammu and Kashmir and Pakistan. IS announced new provinces in India—Islamic State Hind Province (ISHP)— (ISHP) and Pakistan—Islamic State Pakistan Province (ISPP)—in May 2019 after the ISKP, which originally encompassed India and Pakistan, suffered a series of setbacks in 2018. ISHP has only conducted approximately six minor attacks per year since 2019. ISPP has similarly conducted an average of eight small-scale attacks per year since 2019. ISHP first attacked in mainland India in April 2021, when militants burned crops suspected of belonging to a Hindu farmer in the Uttar Pradesh region, but the group has not claimed an attack in India since.[4] ISPP has never conducted an attack in mainland India.

ISHP is focused on small-scale attacks and, in May 2022, encouraged Indian Muslims to adopt “lone wolf” jihad instead of waiting to join ISHP physically.[5] ISHP also has a small and disorganized fighting force. There may be fewer than 15 militants linked to ISHP, and they suffer from logistical challenges, such as inadequate resources and a lack of weapons. IS recruits in India may be even more inclined to join ISKP in Afghanistan than ISHP. ISHP may also inflate attack casualties to exaggerate its strength to prospective recruits. ISHP shot at Indian police officers in Srinagar, western Kashmir, on July 12 and claimed to kill three officers and wound one other. Indian press outlets, however, *reported that the attack killed one officer and injured two others. ISHP media outlets continue to reach out to Indian Muslims through online channels, suggesting it is possible but not imminent that ISHP could successfully recruit in parts of India beyond is bases in Kashmir. A 2020 UN report claimed that there were “significant” numbers of ISHP operatives in India’s southern Kerala and Karnataka states, and *recent arrests show cells continue to try to recruit in this region.

The ISKP is more likely to escalate attacks against Indian interests in Afghanistan and Pakistan than to attack in India. IS announced its expansion to parts of modern day Afghanistan, Iran, and Pakistan in 2015 and has since conducted several high-profile attacks. ISKP mostly consists of Afghans but *includes foreign fighters, including Indian nationals. ISKP regularly attacks religious minorities in Afghanistan and Pakistan and could claim these attacks as revenge against India.[6] ISKP may also target Indian interests in Afghanistan to undermine the Taliban’s *efforts to build diplomatic ties with India. ISKP attacked a Sikh temple and killed two people in Kabul, eastern Afghanistan, on June 18, claiming the attack was in revenge for the BJP incident.[7] ISKP media emphasized that the Taliban would fail to protect Hindus after its June 18 attack, suggesting the attack was also meant to undermine Taliban governance and security. ISKP could attempt to obstruct Taliban efforts to normalize its government internationally by attacking the Indian embassy in Kabul, which India has begun to reopen and the Taliban has promised to protect.

ISKP may leverage its Indian national members to conduct an external attack in India in the future, but this would mark a significant expansion of ISKP’s recent attack zones. An ISKP-aligned media unit warned on June 15 that ISKP would attack religious minorities as revenge for the BJP’s comments about Islam. ISKP supporters are likely still present in India; Indian authorities most recently arrested a suspected ISKP supporter in August 2020. ISKP activity in India appears to be focused on *recruitment and training, which could be a precursor to attacks. ISKP also has Indian national members that it could redirect toward attacks in their home country. ISKP suicide bombers from Kerala in southern India bombed a Sikh temple in Kabul in March 2020. India nationals from ISKP also conducted a prison break in August 2020 in Jalalabad, northeastern Afghanistan. ISKP could send Indian recruits back to India to establish cells, an IS strategy employed in other theaters. Foreign fighters likely do not threaten India while ISKP is actively engaged in a campaign in Afghanistan, but these recruits could still pose a risk in the long term.

Even a small-scale attack could cause disproportionate effects in India’s volatile political and religious environment. India’s Hindu nationalist government under Prime Minister Narendra Modi has exacerbated tensions between Hindus and Muslims corresponding with a rise in incidents of religion-based hate crimes in India since 2014. Protests and rioting erupted across India in June after the BJP spokesperson’s comments. Major protests ended in mid-June, but the killing of a Hindu man for supporting the BJP on June 28 in Udaipur, northwestern India, was a flash point for renewed turmoil. Protests *broke out in Udaipur on June 28 after the attack, prompting authorities to deploy hundreds of additional police to the area and ban large gatherings for a month. No group claimed responsibility for the attack, but some local officials linked the attackers to IS, and online IS supporters lauded the execution and promoted acts of violence against Hindus on June 28.[8]

India’s inexperience with recent al Qaeda and IS attacks could cause Indian authorities to mishandle a terror attack and contribute to a cycle of violence. Indian security forces have taken a heavy-handed approach to protests, and authorities could use similar tactics following an act of terrorism. Indian authorities demolished the homes of several Muslims accused of rioting in Uttar Pradesh, northern India, between June 11 and 13, sparking political backlash. Salafi-jihadi groups like al Qaeda and IS could exploit an excessive crackdown in the wake of an attack for further recruitment and incitement.

Al Qaeda or the Islamic State could coordinate a major attack in India in the long term. Salafi-jihadi groups have carried out attacks in response to similar political controversies years after the event. Al Qaeda–linked militants killed six people when they bombed the Danish embassy in Islamabad, Pakistan, in February 2008, in response to Danish newspapers reprinting cartoons satirizing the Prophet Muhammad from 2005. AQAP coordinated an attack on the Charlie Hebdo newspaper office in Paris, France, in January 2015, in retaliation for the newspaper’s depiction of the Prophet Muhammad several years earlier. A pro–al Qaeda media unit drew parallels between the BJP’s comments and Charlie Hebdo’s depictions of Muhammad on June 5.[9] An AQAP veteran commander on July 9 called for attacks on anyone who insults the Prophet Muhammad, singling out Indian Hindus and French nationals.[10] There could be a long buildup to retaliatory attacks, and the inability of al Qaeda or IS affiliates to attack immediately after the controversy does not rule out future attacks in India or elsewhere.

Correction on October 21, 2022: This article previously stated that ISHP and ISSP have only conducted approximately one to two small-scale attacks per year since 2019. It has been updated to indicate a higher number of attacks for each group.

[3] SITE Intelligence Group, “AQIS Raises Specter of Death, Destruction in India in Revenge for Insults to Prophet,” June 7, 2022, available by subscription at www.siteintelgroup.com.