Key Takeaway: The Islamic State (IS) announced a global attack campaign to exaggerate its strength and cohesion following senior leaders’ deaths, continuing a pattern from prior years. This attack campaign is an effort to brand ongoing IS affiliate activity as a coordinated effort and does not indicate a noteworthy change in IS global capabilities. Some participating affiliates expanded the scope of their attacks during the campaign. These inflections likely reflect the affiliates’ preexisting objectives rather than new IS leadership guidance, however.

IS continued a trend of promoting a global named operation in the aftermath of a senior leadership change. The IS spokesperson, Abu Umar al Muhajir, announced the “Revenge Battle for the Two Sheikhs” campaign on April 17 and called on supporters to conduct attacks to avenge the deaths of late IS leader Abu Ibrahim al Qurayshi and late IS spokesperson Abu Hamza al Qurayshi.[1] Abu Ibrahim al Qurayshi killed himself during a US raid in February 2022. The new IS spokesperson confirmed on March 10 that the late spokesperson died.[2] IS affiliates in Afghanistan, the Democratic Republic of Congo, Egypt’s Sinai Peninsula, India, Iraq, Libya, Nigeria, Pakistan, the Philippines, Somalia, and Syria have claimed attacks under the campaign as of April 29, 2022.

IS previously promoted a revenge campaign from December 22 to December 31, 2019, after the death of former IS leader Abu Bakr al Baghdadi. IS affiliates in Iraq, Nigeria, and Syria escalated attacks during this period.[3] IS Sinai Province and IS Yemen Province also claimed attacks under this 2019 campaign. More than double the number of affiliates have participated in the 2022 campaign compared to the 2019 campaign, rising from five to 11.

ISWA has claimed several routine attacks under the Revenge Battle campaign, likely to benefit from increased media attention and demonstrate its continued allegiance to IS. ISWA activity is concentrated in northeastern Nigeria in Borno and Yobe states. The recent claimed attacks include assaults on Nigerian soldiers and Christian civilians in Borno on April 20 and April 23,[7] an IED attack targeting Nigerian soldiers and Christian civilians in Yobe state on April 24,[8] and four attacks targeting Christians just across Nigeria’s border in Diffa, southeastern Niger between April 22 and April 26.[9] 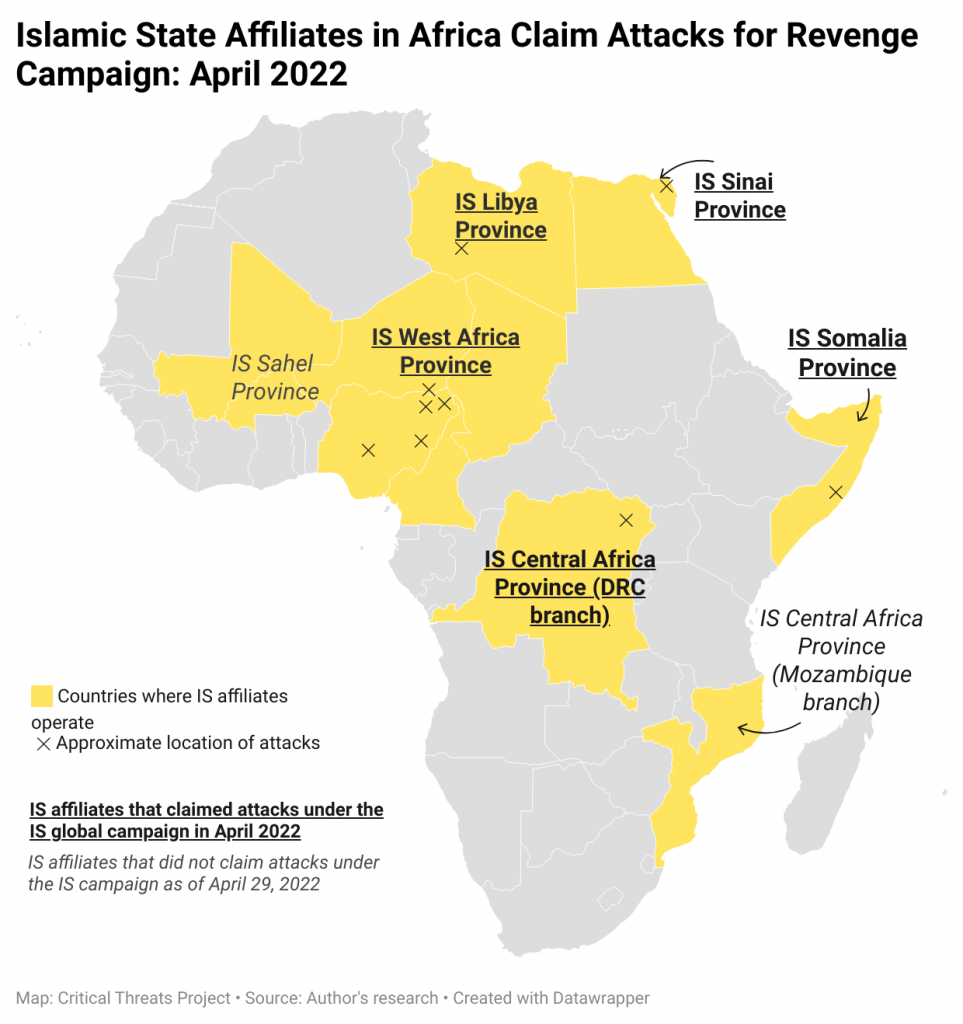 The Islamic State’s Khorasan Province (ISKP) attacked into Uzbekistan for the first time. ISKP fired 10 rockets at an Uzbek military base in Termez, southern Uzbekistan on April 18.[10] ISKP has escalated its activities in Afghanistan since US forces withdrew in August 2021. ISKP did not participate in the 2019 IS revenge campaign. The April 18 attack may advance ISKP’s goal to attract more recruits from Central Asia. ISKP may be also expanding attacks during the spring and summer fighting season. 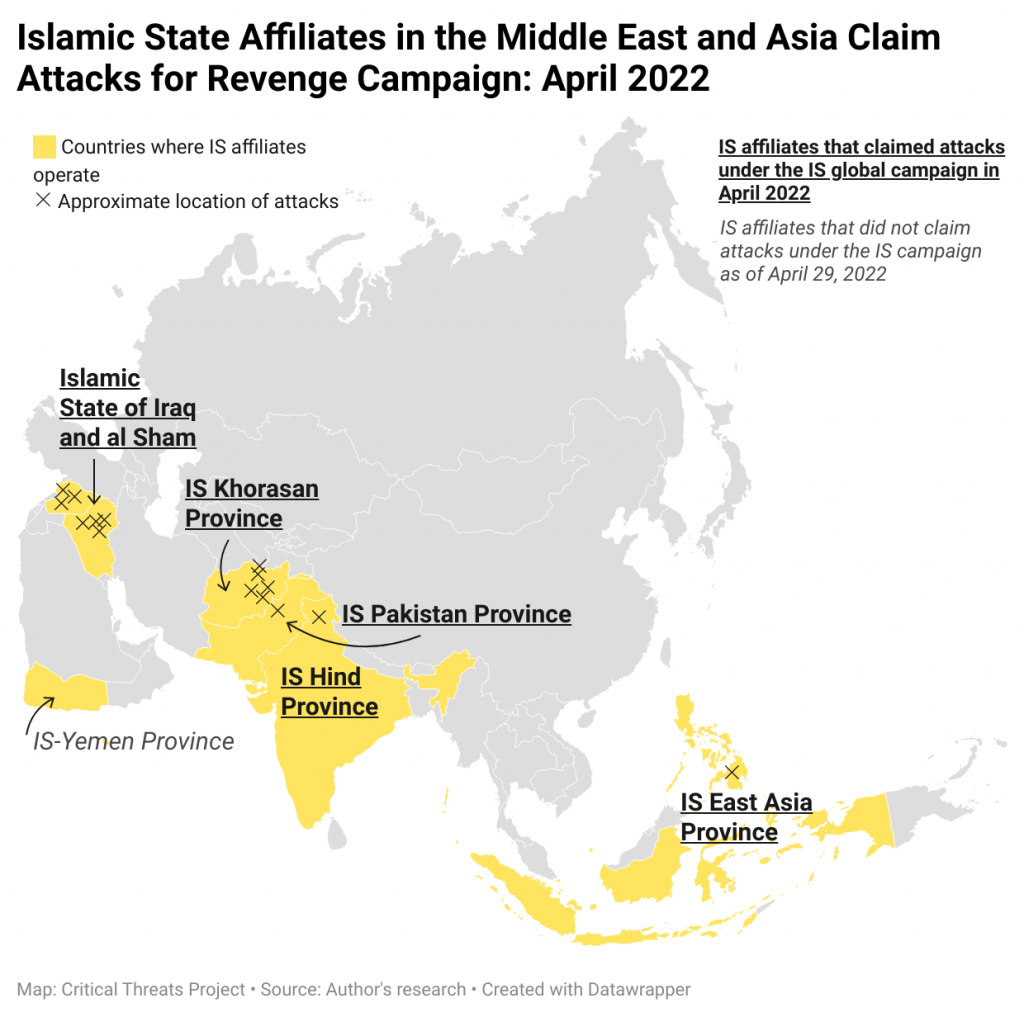 Four weak IS affiliates claimed attacks under the April 2022 campaign to demonstrate their continued belonging to the IS network. These groups did not claim attacks under the December 2019 IS revenge campaign. The 2022 claims by IS affiliates in India, Pakistan, Somalia, and Libya show continued communications between these groups and IS’s media network but do not indicate inflections in their capabilities, which are limited to intermittent attacks in remote areas. IS Hind Province (ISHP) conducted a grenade attack on an Indian police post in Srinagar in Indian-administered Jammu and Kashmir on April 18.[13] ISHP has conducted approximately six minor attacks per year since its formation in 2019. The IS affiliate in Pakistan continued targeting religious minorities in Pakistan and shot a “polytheist” under the campaign on April 28 in western Pakistan. IS-Pakistan has conducted approximately eight small-scale attacks per year since 2019, similar to ISHP. The IS branch in Somalia detonated an IED and claimed to kill three Somali police officers in the capital Mogadishu on April 20. IS-Somalia has run an assassination campaign targeting Mogadishu police since 2020, and also attacks security and political personnel in northern Somalia. IS fighters in Libya detonated a vehicle-borne improvised explosive device (VBIED) targeting a Libyan militia outpost near Sebha in southwestern Libya on April 18, claiming to kill one militiaman.[14] IS-Libya debuted a VBIED capability in southwestern Libya in June 2021 but has attacked only sporadically since.

More IS affiliates will likely claim attacks under the campaign, which will likely conclude at the end of Ramadan in early May. IS Central Africa Province’s Mozambique branch, IS Sahel Province, and IS Yemen Province have not yet claimed attacks. Of these, the group most likely to participate in the Revenge Battle campaign is IS-Sahel. IS media recently began promoting IS-Sahel attacks under this name, distinguishing it from ISWA, in March 2022.[15]

Correction on October 21, 2022: This article previously stated that ISHP and IS-Pakistan Province have only conducted approximately one to two small-scale attacks per year since 2019. It has been updated to indicate a higher number of attacks for each group.

[2] SITE Intelligence Group, “IS Confirms Death of Leader and Announces Passing of Spokesman,” March 10, 2022, available by subscription at www.siteintelgroup.com.

[4] SITE Intelligence Group, “Marking Another 1st During Military Campaign, IS Claims Attack in Taraba that Targeted Bar of Nigerian Christians,” April 20, 2022, available by subscription at www.siteintelgroup.com.